Liz Gerber talks about the limitations of creating lists

Last month, Public Interest Design named me as one of the top 100 people re-imagining the world. As honored as I am – and please do put me on all your lists! – I couldn’t help but think that “top” lists are exactly the opposite of innovation. Herewith, the top 11 reasons to ignore all those lists that you’re not on.

11. Lists are issued by the kind of people who are always talking. Innovation comes from those at the fringes who don’t have time to write lists. Do you think Alexander Graham Bell was worrying about other scientists’ ideas when he invented the telephone—or was he following his hunch that one might be able to hear sound over a wire?

10. Lists describe the world in generalities. Innovation comes from attending to detail. Apple engineers optically scanned people’s ear cavities, built 100 mockups of the Apple EarPod, and then asked more than 600 people to jump up and down, run, shake their heads–all with the intention to create the recently introduced earplug that stays in the ear in all in extreme heat and extreme cold. Can you put that process in a list item?

9. Lists are limited. The best idea is sometimes number 1,203. In 1946, frustrated with leaky cloth diapers, Marion O’Brien Donovan—in a desperate last resort–cut up the shower curtain in her bathroom and sewed a diaper to prevent leaks. Many iterations later, she patented the first reusable diaper cover made from nylon parachute cloth. The “boater,” as she called it, was the precursor to today’s disposable diaper. What if Donovan had stopped at iteration ten? Would we still be leaking?

8. Lists confirm what we already know. Innovation thrives on examining what we think we know in a new way. DuPont chemist Stephanie Kwolek invented Kevlar, a fiber used in bullet-resistant vests, when experimenting with polymers to develop lightweight, heat-resistant fibers. In 1965, while she was trying to dissolve one of the polymers, her solution had a consistency like water rather than the typical consistency of molasses. Where her colleagues saw a failure, Kwolek saw an opportunity—and spent several days trying to convince her colleagues that the “failed” solution could be spun into a fiber that was strong, stiff, and yet lightweight. What if Kwolek dismissed her hunch on the first day?

7. Lists mean passively consuming someone else’s ideas. Innovation demands experimentation and action. Why are you reading this list when you should be out testing your own hunches?

6. Lists deal with one topic at a time. Innovation comes from the intersection of two or more ideas, people, and institutions. In 1965, blending his love of snow and surfing, Sherman Poppen created the Snurfer–the precursor to the modern snowboard. What happens when you use lists to debunk lists?

5. Lists mention a handful of people, places, and things. Innovation thrives on collaboration between many. Harvard Business School researcher Teresa Amabile has spent her thirty-five year career trying to understand how the work environment influences innovation. She and her research team find that people are more innovative when they work together–sharing knowledge and debating new ideas–rather when they work alone. I talked to at least 30 people when writing this particular list.

3. Lists perpetuate stereotypes that prevent people from seeing new opportunities. Hugh Herr lost his legs when he was 17 years old while climbing Mt. Washington in New Hampshire. He now runs the biomechatronics lab at MIT, where he builds prostheses. In 2004 his computer-controlled knee was named one of TIME magazine’s Top Ten Inventions (a list you should ignore). Herr says, “It’s really sad to have biological limbs; you’re constrained by nature and you can’t upgrade. The artificial parts of our body are immortal.”

2. Lists are too simple. Innovation is difficult. In 2004, the Department of Health and Human Services released a study showing that the current generation of kids may be the first to have a shorter lifespan than their parents, due to obesity, unhealthy eating habits, and physical inactivity. In response, Kirsten Tobey started Revolution Foods, now a 700-employee company that provides healthy school lunches to low-income communities in six metropolitan communities. She gets up at 5:30 am to go to work, gets home at 6 pm, plays with her two young children, and then goes back to work. She says, “It’s really hard, but there’s nothing I’d rather do.”

1. If your name is not on the list, you feel inadequate. Innovation demands building on your strengths and not wasting time on your inadequacies. Why are you still reading this when you should be pursuing your own ideas? 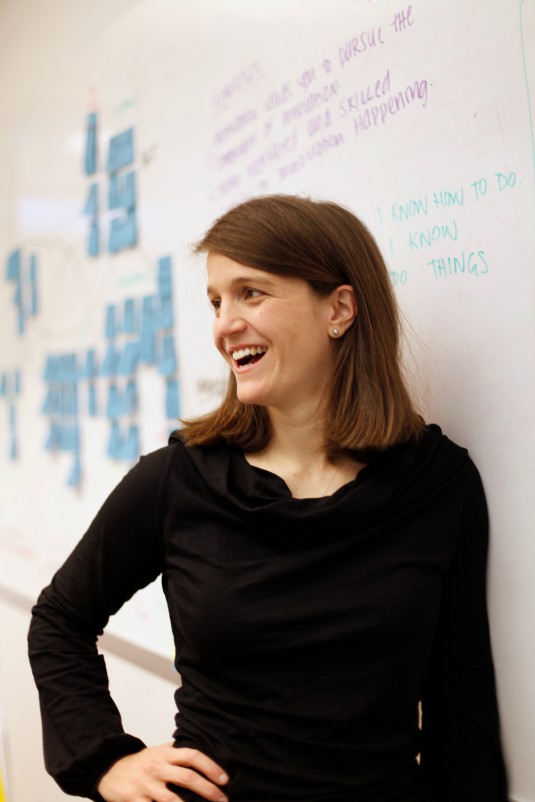 When Northwestern University mechanical engineering and communications professor Liz Gerber is not telling people to stop reading her lists, she is designing tools for online and offline communities, leading Design For America, and building forts with her husband and two kids in Chicago. She is a Public Voices Fellow with The OpEd Project.