We need to hold Trump accountable to the legal standards for public space in New York City—starting at the sad public spaces within Trump Tower itself.

Last week, New Yorkers stormed Trump Tower (one of the least energy-efficient skyscrapers in the city) for a Climate Change/Public Space “Teach-In,” an event hosted by Climate Works for All. The teach-in, meant to raise awareness about Donald Trump’s damaging policies and real estate practices, was nearly stopped in its tracks, however, when private security and NYPD attempted to prevent participants from entering—despite the fact that the tower’s main lobby, lower level concourse, and two landscaped terraces are public space (Trump was given an additional 105,436 square feet, 14% of the Trump Tower, in exchange for designating these spaces as public). It took a civil rights attorney reading city zoning code, out loud, for the teach-in to take place.

Speaking at the event, Michelle Young, the founder of Untapped Cities and an adjunct professor of architecture at Columbia University GSAPP, explained how the “publicness” of POPS (privately owned public spaces) are all too often subverted. In the following adapted piece, Young explains how POPS came to be and how vital it is that we take action so that egregious offenders (such as Trump Tower) are held accountable.

POPS have been very little understood by the public in New York City, despite being around for more than half a century. In a way, it’s opportune that the controversy over Trump can raise awareness about this larger issue on public space.

When we use the term public space in New York City, we are really talking about spaces under the jurisdiction of a complex hierarchy of players, as many of the city’s spaces that appear to be public are run by private corporations, private non-profits (like park conservancies), in addition to city and state agencies. Sometimes these groups work in tandem with each other. Privately owned public spaces, known as POPS, came out of New York City’s 1961 zoning law. According to the NYC Department of City Planning, “Privately Owned Public Spaces (POPS), are an amenity provided, constructed and maintained by a developer for public use, in exchange for additional floor area.” As Jerold Kayden, author of Privately Owned Public Space: The New York Experience and the Frank Backus Williams Professor of Urban Planning and Design at Harvard University’s Graduate School of Design, has found in his extensive research of New York City’s POPS, over the last 56 years, almost 540 POPs covering more than 80 acres have been created throughout New York City. This is about 10% the size of Central Park or the floor area of 6 Empire State Buildings. The vast majority of POPs are concentrated in Midtown, upper East Side and the Financial District. These spaces can include outdoor plazas, indoor plazas, covered arcades, such as those along 6 ½ Avenue, and open air concourses.

In 2000, a study by Kayden, NYC Department of City Planning and Municipal Art Society on the city’s POPS found that while “an impressive amount of public space had been created in parts of the city with little access to public parks, much of it was not of high quality.” 41% of the spaces were determined to be devoid of utility and the inaccessibility of spaces and de facto privatization of spaces were notable key failures. In the late 1990s, it was found that about 50% of buildings had at least one POPS that was apparently out of compliance. This is not to say that the design principles and requirements have not been revised or updated since 1961 by the city. In fact, significant progress has been made—but these mostly only apply to new construction and upgraded spaces.

Now, design principles include making sure the space is open and inviting to the sidewalk, that it is accessible, that the space provides a sense of security and safety, and provides places to sit. Elements considered essential for a successful space include planting and trees, abundant, comfortable seating, circulation paths, and well-designed lighting.

Donald Trump and Trump Commercial LLC, which operates Trump Tower, received an additional 105,436 square feet of development space in 1979, worth about $530 million in profit in today’s dollars, in exchange for creating the POPS there. They also received an additional bonus of 105,437 square feet for providing retail within the special Fifth Avenue Subdistrict. The privately owned public space at Trump Tower technically covers the main lobby, the lower level concourse, and the two landscape terraces on upper floors. The POPS amounts to 6,626 square feet in the interior of Trump Tower and 6,336 square feet across the landscape terraces. 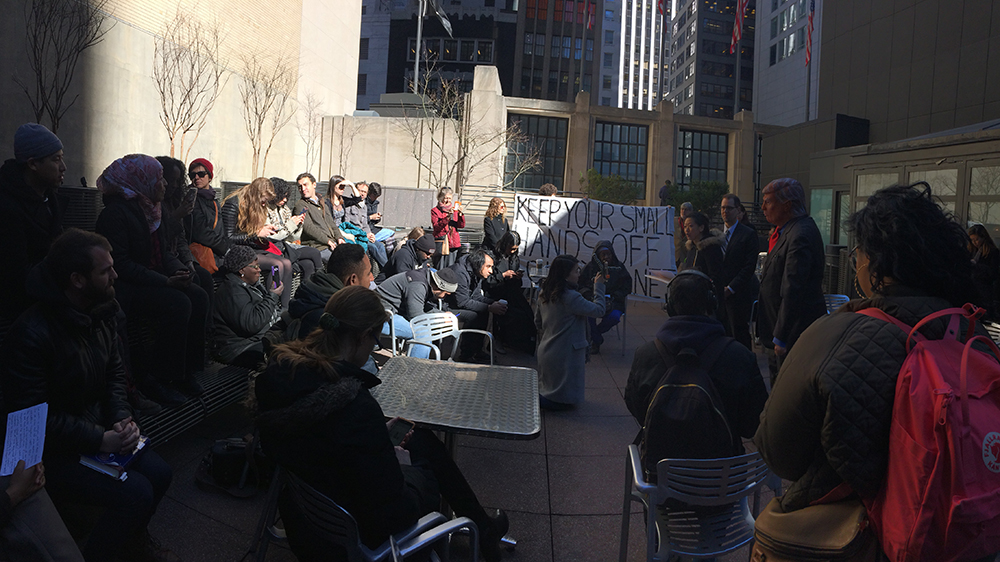 In the lobby, a bench across from the main elevators is supposed to be for public use. This is not the original stone bench that was originally located there. The current bench appeared only following a $14,000 fine levied on Trump Tower Commercial LLC in August last year for removal of the bench and illegally placing two sales counter in its place. Additionally, with today’s media frenzy surrounding Trump and the election, the bench is sometimes roped off and often occupied by a bevy of journalists hoping to catch a glimpse of someone, anyone, Trump related coming out of the elevator.

One of the design requirements are that indoor POPS must be easily accessible from the street and provide a place to sit and rest. But security-wise, visitors now have to put their belongings through a Secret Service operated X-ray machine upon entering both at Fifth Avenue and through the connecting privately owned public space at 590 Madison Avenue. Security personnel, whether NYPD or Secret Service abound, and certain elements that are required to be accessible under the POPS designation are not anymore. For example, escalators are supposed to access concourse, street level and all upper floors, but the escalators above the second floor are roped off during certain open hours.

The two landscaped terraces have been difficult to find from the beginning, and the lobby lacks effective way finding signage, as is required. When the escalators are roped off after the second floor (which occurs until about 10am in the morning, and starts again in the late afternoon), this also means that you can no longer access the landscaped terraces by escalator. The terrace levels were also once accessible through two floors of Nike Town, but that is no longer the case. Now, the only means to access the terraces is through the main elevator bank which is guarded and packed with press—not exactly welcoming.

The noticeable signage in the lobby is above the main elevator bank, offering access to “Public Gardens at Terrace Level C & D.” I spoke to a few Trump Tower employees here, who confirmed that the terraces are still open to the public, but sometimes close early “due to weather.” One terrace has had a sign for quite some time stating that it’s temporarily closed due to construction, and a Trump Tower staffer told me that he did not know how long it would be before it opened again. The terraces are technically supposed to be accessible when the stores at Trump Tower are open, which is 9 am to 6pm on weekdays and 10 am to 6 pm on weekends, which is already fewer hours than the minimum hours generally permitted when a nighttime closing of a POPS has been authorized.

The protest, which was spearheaded by Climate Works for All, definitely took some advance coordination. Clearly, you can’t bring in a group of 50 people at once, so entrances were staggered. The most difficult part was the fact that, immediately when the teach-in started, a security guard arrived claiming we could not hold our teach-in there and tried to intimidate the speaker. Following, more security arrived, along with a group of NYPD Counter Terrorism officers who work in Trump Tower and Secret Service agents. Fortunately, the organization had an on-site lawyer who knew the ins and outs of zoning law in New York City, and NYC Councilman Mark Levine, who also spoke at the teach-in, helped keep security at bay and maintained the relationship with the NYPD. We had a legal right to be there and to use the space, but security did close off the terrace to other people, which is not legal. But still, fundamentally, the peaceful use of public space should not require the presence of a lawyer and government official.

The bottom line is that I don’t think most New Yorkers, and for sure most tourists, are even aware that the lobby and other spaces in Trump Tower are public space. And beyond aesthetics, Trump Tower’s privately owned public space is one of the more egregiously out of compliance in the city. We need to hold Trump Tower and Donald Trump accountable to the legal standards for public space in New York City, particularly due to the hundreds of millions of dollars of development bonuses he has received in exchange. Given Trump’s new role, Trump Tower holds a greater responsibility to follow longstanding laws that safeguard public space in this city.

New Yorkers need to be aware that there are public spaces that are rightfully theirs that are off-limits to them. In addition to POPS, this includes numerous properties within the NYC Parks Department. If we don’t claim them and use them, developers will be just as inclined to privatize them, whether de facto or deliberately. New York City Hall just introduced a package of bills that will raise the penalties for building owners that don’t keep up their end of the bargain for POPS. That’s a great development and is the result of people occupying these types of public spaces and fighting for their rights, letting their government officials know this matters to them. Teach-ins are a great way to get involved, exercise your first amendment rights, and also learn something in the process. 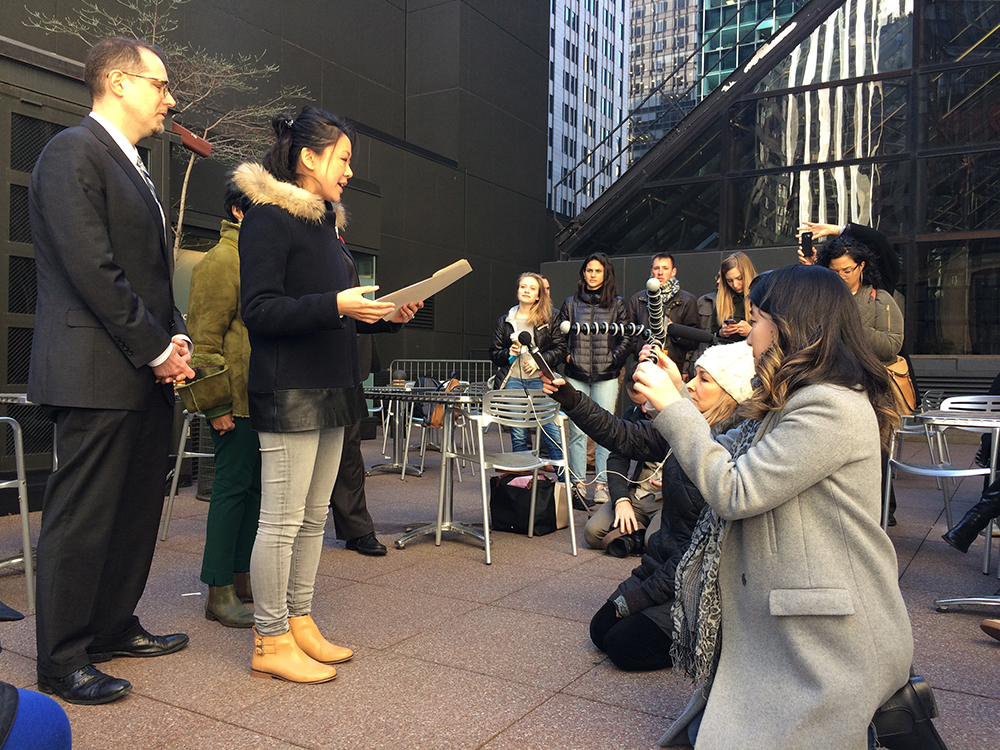