You might be surprised to learn that, until recently, there was no real dictionary of design—nothing, in print form anyway, devoted solely to the specialized terminology of design disciplines. Last night, however, saw the celebration of just such a book—titled, appropriately, Design Dictionary: Perspectives on Design Terminology (Birkhäuser)—at the Sheila C. Johnson Design Center, a […]

You might be surprised to learn that, until recently, there was no real dictionary of design—nothing, in print form anyway, devoted solely to the specialized terminology of design disciplines. Last night, however, saw the celebration of just such a book—titled, appropriately, Design Dictionary: Perspectives on Design Terminology (Birkhäuser)—at the Sheila C. Johnson Design Center, a space-agey addition to the New School campus shoehorned into a former breezeway amid a cluster of historic buildings on Manhattan’s Fifth Avenue.

“There are no illustrations,” said Tim Marshall, the dean of Parsons the New School for Design, gamely working the crowd on a pair of forearm crutches (ankle, ice). “It’s purely about the language of design.” Marshall co-edited the book with Michael Erlhoff, a professor at the Köln International School of Design (KISD), in Cologne, Germany. This intercontinental collaboration accounts for the book’s chief oddity: about half the entries were written in German and translated into English, and vice versa. (The German version appeared last December; the English version is now available in the U.S.) “It’s hard enough coming up with definitions in one language,” Marshall said, “but when we started going back and forth between German and English, it really got interesting.” 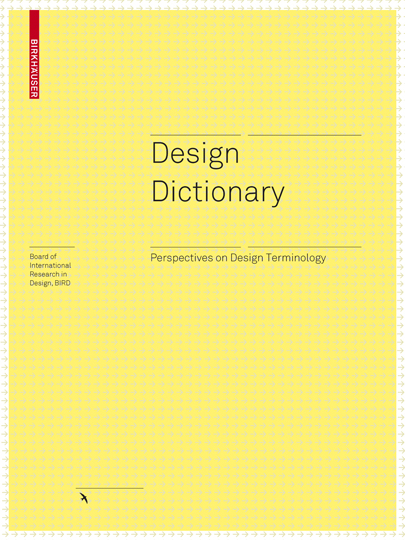 The strenuousness of the collaboration may account for what appeared to be Marshall’s genuine relief at the project’s completion, and for the buoyant mood of the crowd, which included many of the nearly 30 Parsons faculty members who contributed entries. This festive spirit was dampened only slightly when the evening’s program began, and Marshall and Erlhoff called on contributors to mount the podium and read one or two sentences of an entry they had written. The result was a sort of awkward poetry slam of the design lexicon. Stefan Asmus, dean of design at the Düsseldorf University of Applied Sciences, began with Quality: “the dimension that connects ‘what questions’ to ‘why questions.’” KISD’s Uta Brandes read from her entry on Gender Design:
The impact of gender in the design context must be considered in its historical, socio-cultural, economical, ecological, and technical dimensions. Students, designers, and marketers in virtually every area of design are all urged to recognize the theoretical, conceptual, empirical, design-related, and practical implications of gender, and to actively address them in their theoretical and practical work. Thank you.
As the contributors soldiered on—hitting entries on Black Mountain College, Virtuality, Illustration, Form, and Consumption—the crowd grew restless. The hors d’oeuvres seemed to have dried up, and pockets of the audience wandered off into the center’s two art galleries. A few contributors grumbled about the speaking requirement, of which they were apparently warned by an earlier e-mail. (“I don’t read my e-mails,” said one, incredulously.)

Perhaps, on reflection, Design Dictionary doesn’t lend itself to an oral format. That is no criticism: the book is, after all, a serious attempt to parse vocabulary shared across various design disciplines. Fortunately, it is often livelier reading than last night’s event might have suggested. There are a number of clever and unexpected topics—Flop, Gimmick, Mood Board, Wicked Problems—and by commissioning more than 100 authors to write the 270 entries, the editors achieved a welcome diversity of tone. Despite the appearance of objectivity, you frequently detect an author’s opinion. During his introduction, Erlhoff said this is intentional, adding that he personally agreed with only about 60 percent of the entries—a good thing, in his estimation. “We didn’t want to produce ideology,” he said. “We wanted to produce discourse.”