What If Half of America Moved Each Winter?

When you compare those states that consume the most energy with those that consume the least, something jumps out at you. The states topping the list in terms of BTU per year are also the most populated states in the country: CA, TX, NY, FL, IL, PA and OH. This pattern holds true at the […]

When you compare those states that consume the most energy with those that consume the least, something jumps out at you. The states topping the list in terms of BTU per year are also the most populated states in the country: CA, TX, NY, FL, IL, PA and OH. This pattern holds true at the other end of the spectrum; the states with the least energy consumption are also the least populated. Vermont, the state with the smallest amount of energy used per year, has just over 60,000 more people than Wyoming, the least populated state in the U.S.

The energy behavior of states is complex and can’t be over-simplified. There’s the amount of industry and manufacturing within a state’s borders, the dispersion of its population, the number of structures and size of buildings, the total energy efficiencies embraced, and the age of the things that use energy like people, buildings, and technologies. In large part, most of these items are constants. They use the same amount of energy, day after day and month after month, with a slow decline in effectiveness over the years (usually more like decades). However, this is not the case with buildings.  Buildings use energy differently each day and each month. This is a factor of weather, temperature, humidity, building type, spaces, and occupancy. The weather varies dramatically as you go from region to region, as well as from season to season within each state. This is where the energy consumption of the states and their populations begins to breakdown.

Look at BTU per person (AKA energy intensity) and the story looks completely different. Texas and California are both gigantic states in terms of energy use and population, but of the two, Texas ranks in the top 10 (or top 47 for that matter) in terms of energy consumption per person. California ranks below Vermont. Although the state of New York holds the country’s third largest population, the energy consumed per capita ranks 50th of the 51, beating out only by Rhode Island. The question is, Why? And more importantly, can this investigation provide a radically different strategy for energy reduction in the U.S.?

I think so. Yes.  In surveying the weather conditions across the states you come across places like southern California, which experiences as many as six months each year that are comfortable enough not to need either heating or cooling within its buildings. And since the other six months are only moderately hot or cool, it means less intense periods of energy consumption per capita. This has a tremendous affect on total yearly energy consumption. Compare that to Vermont–a state nearly engulfed by freezing weather from October to April.  Heating is not only needed most of the year, but it’s required in intense measures. Heating is most often the biggest energy consumer within a building—typically representing 50% or more of the building’s total energy footprint. Figure that into a cold region, like the northeast and higher energy consumption is guaranteed. 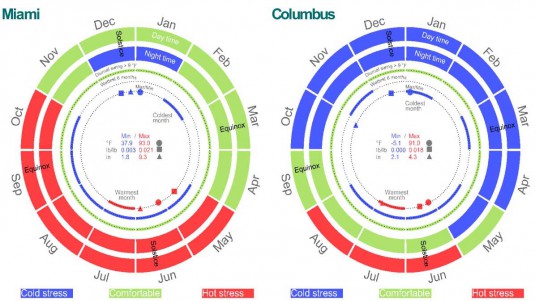 Why does this matter? Natural ventilation and direct connection to the surrounding climate could mean reducing the energy load of buildings. Mild states like California could afford to use almost zero energy heating and cooling for half of the year. However, northeast’s highly variable states could not. Louisiana–super hot and super humid–is another big energy consumer per person. Opening the windows will not cool you down and there aren’t any effective building measures to reduce interior temperatures with natural ventilation. You have to use forced air or some other mechanical system. As the U.S. population becomes increasingly mobile and the need for dramatic energy policy and practice intensifies, we must begin to think beyond the limits of individual states and technologies to create real change in our energy consumption.

Think about this: what if half or all of the residents of the cold northeast moved to southern California during the really cold months each year? Or dispersed among 4 or 5 states with less energy intensity from October to March—moving to areas designed to maximize the climatic comfort inherent in that region?  Their personal energy consumption would drop to zero, the hosting state and region would get a huge uptick of business, the people would be able to live without needing heating or cooling, and the carbon emissions and fuels required to serve them in the cold region would be conserved.

Of course, Vermont and its neighboring states would be empty…local businesses, companies, and governments would need to adapt to the change in population. But in essence, they could show a reduction of energy consumption of 50% or more. If cold weather states like NJ, PA, IL, OH, MI, and MA followed suit, our energy footprint could be radically reduced. Mobility, construction, and economies would amplify for the betterment of our wallets and the environment. This would be a solution geared to the realities of the 21st century.  We are no longer a stationary world; globalization has forever changed that. With mobile devices and telecommunications, your desk can be anywhere in the world at any time.  This isn’t news, but somehow our conversation about energy hasn’t kept up. We are still looking at energy from the old conventional perspective of fuel type…coal versus solar, natural gas versus wind, and which is better. Technologies applied to problems in a static system will only deal with issues that are constant…just as energy efficiencies work for TV, appliances, lighting and equipment. Imagine how great it would be to live within a dynamic culture and economy in which you are encouraged to have two or three dwellings—living in areas with comfortable temperatures ranging from 65° and 75° during specific months.  Yes, it would mean a huge shift in how we think about our society and a huge transformation to coordinate that shift…but that’s what innovation is all about. It could be the biggest disruptive technology ever devised.

Neil Chambers, LEED-AP is the CEO and founder of Chambers Design, a research-based, contemporary design company, focused on next generation architectural and technological solutions based in DUMBO Brooklyn. He is the author of Urban Green: Architecture for the Future.  Neil’s work includes urban design, green building design, energy assessment, master planning and habitat restoration.  He is interested in the relationship between ecosystems, ecological services, buildings and infrastructure.  He has taught at NYU and FIT as well as spoken throughout the United States and around the world. Join the conversation at www.facebook.com/architectureforthefuture.