What If…Infrastructure Could Engender Public Trust?

Water Pore Partnership is not only bringing beautiful water infrastructure to cities, but using these systems as tools for public engagement and awareness.

By: Andrew Burdick and Burak Unel

Infrastructure is the often-unseen giant of our built environments.  Unfolding beneath our feet and above our heads, our public infrastructures are simultaneously visible commodities and invisible systems.

This is certainly the case with our water infrastructure, possibly the most critical among our public utilities. Water is everywhere, from our oceans to our bodies, and its infrastructures support small towns and big cities alike. Yet for all its omnipresence, we are surprisingly disconnected from the infrastructures that deliver water to us on a daily basis. Except immediately prior to consumption, we typically don’t see it, touch it, or engage with it. It seems safe to say that, in most cases, we are blissfully unaware of our water’s source, the process by which it gets to our taps, or the ways in which its safety is assured.  We trust that it will be there, but as the recent crisis in Flint, Michigan demonstrates, we cannot afford to remain unaware of the mechanisms and agencies through which this vital resource is made available to us.

Amy Mielke and Caitlin Taylor are leveraging design exactly for this purpose.  Featured as Gamechangers by Metropolis in 2015 for their Poreform project, Mielke and Taylor’s Water Pore Partnership (WPP) is re-thinking water infrastructure at multiple scales in diverse cities. 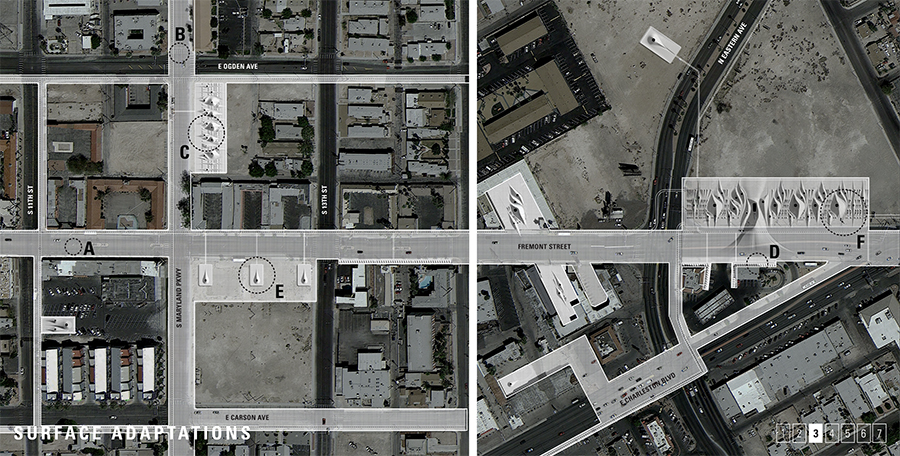 The project is an ingenious and beautiful system of articulated, water-collection spillways and underground water tanks intended for implementation in downtown Las Vegas. These spillways form a system of undulating topographic landscapes that help channel and collect stormwater at critical points around the city to minimize runoff and increase infiltration, while treating the captured water in underground cisterns, retaining it for future use.

Poreform not only introduces a vital piece of water infrastructure, but uses the system as a tool for public engagement and awareness. As the waffle-slab concrete landscapes of the system fill in disused lots, bridge across natural and manmade topographies, and help stitch the disjointed urban fabric of the city back together in a very literal way, they also create new public spaces and amenities. From new sidewalks and urban parks to sculptural plazas and subterranean cisterns doubling as performance and learning spaces, Poreform helps create opportunities for community engagement, education, and awareness of its most valuable and underutilized natural resource. Beyond traditional systems of single-purpose pipelines and water mains, which remain hidden and inscrutable to most, the design succeeds in making water an interactive and engaging resource and takes a much-needed step forward in restoring the relationship between people and their natural resources. Moving beyond a powerful idea on paper, WPP is now prototyping a proof-of-concept for the Poreform system to develop a practical path toward implementation.

Increasing the legibility of and public interactions with critical water infrastructure is also the guiding principle behind WPP’s most recent project, which won a 2016 NYSCA grant and is supported by the Storefront for Art and Architecture. As Mielke and Taylor explain, the project is “a response to global water quality crises and a growing lack of public trust” in civic infrastructure and institutions. By postulating that a new generation of infrastructure design could restore faith in our cities and our institutions, WPP proposes a re-design of New York’s 956 iconic cast-iron water sampling stations, turning them into civic beacons and information centers.

These beacons will  publicly communicate vital information like pH, chlorine, and pollutant levels at sites throughout New York City in real time; new sampling stations will connect communities to their own water supply in a transparent way and turn what was previously an intangible concept— water safety—into a tangible and engaging piece of design.  The new stations also have the potential to spur the development of public spaces around them.  In many ways, these stations are a contemporary update to community fountains, which have traditionally served as hubs for neighborhood gathering, information exchange, and socializing. This aspect of the design is critical: by turning a once purely practical, hidden-in-plain-sight structure into an engaging and interactive new amenity, not only does the local community become more invested in their services, but a dialogue can emerge between utility providers and consumers, government agencies, and residents. Mielke and Taylor hope that this personal and emotional investment in infrastructure can then spur financial investment, increase accountability, and re-establish the public’s trust.

Water Pore Partnership’s projects represent a new direction for public infrastructures, in which design meets and transcends the engineering needs of critical services, creates powerful public spaces, and makes these systems more tangible in our daily lives. Such critical thinking hopefully signals the beginning of a much-needed 21st century infrastructural renaissance, one harnessing the creative power of design to fuse infrastructure and public space.

Fahir Burak Unel is a designer at Ennead Architects and Ennead Lab, the firm’s research and design advocacy initiative. His work explores the intersection of sustainability, affordability, and technology, and promotes community advocacy through design. Andrew Burdick is associate partner at Ennead Architects and the director of Ennead Lab. This series—titled What If…?—focuses on design opportunities and their potential impact.