Herzog and de Meuron’s fortress-like extension is a powerful metaphor for the state of inclusivity in a post-Brexit world.

This article appeared originally on ArchDaily.

Architects in the United Kingdom have been subjected to a month of monumental highs and lows. After Herzog & de Meuron’s Tate Modern extension (known as Switch House) opened Friday, June 17, the following Thursday, June 23, the country proclaimed its (ill-planned) desire to leave the European Union. It would be easy to see the two events as separate, with no obvious overlap. But in fact the Tate seems to have an odd symbiosis with the Brexit decision – if in no other way than by promoting a vision emphatically against it.

Chatter of the Tate Modern’s expansion began in the mid-aughts, years earlier than had been originally forecasted based on visitor projections. The original building, which opened in May of 2000 and is now known as Boiler House, was anticipated to have 2 million annual visitors. Just over a month after opening, the museum had already received its millionth patron, and by 2014 attendance had climbed to 5.7 million per year, making it the most visited modern and contemporary art museum in the world.

Founded in 1897 when sugar magnate Sir Henry Tate donated his paintings collection and £80,000 to the British capital, forming the Tate Gallery, the museum has been London’s principal venue for modern art since 1916.

Always straddling between the nineteenth and twentieth century, the need for a separate modern art museum was acknowledged early on, but not addressed until the early 1990s. What is now the Tate Modern began as Bankside, an ill-placed power station at the heart of London, on the south side of the Thames opposite St. Paul’s Cathedral. Designed by Giles Gilbert Scott in 1947, the power plant began operations in 1963 but was quickly decommissioned in 1981, and was almost demolished in the subsequent decade. In April 1994, Bankside was selected as the home for the Tate’s new outpost, and Herzog & de Meuron won the building’s design competition in January 1995.

Known for his clairvoyance, Tate Director Nicholas Serota saw the advantage of Bankside’s scale – a museum of its size could never have been built for the same cost from scratch – and also recognized that the site offered the possibility for future expansion. The museum announced its plans for such a proposal in 2005, when Herzog & de Meuron were selected again for the expansion. At the time, it was stated that the addition – which would add 60 percent more gallery space – would be completed in time for 2012 Olympics in London, but all bets were off after the onset of the Financial Crisis.

After the 2005 announcement, Herzog & de Meuron unveiled their initial design for the museum in the summer of 2006. The proposal revealed an irregular and slightly precarious heap of rectilinear glass boxes, gradually tapering in a ziggurat-like shape. The then-all-glass extension echoed the glossy “light block” that was Herzog & de Meuron’s one significant structural addition to the Giles Gilbert Scott building during the original renovation. For a point of comparison, one can look to Herzog & de Meuron’s headquarters building for Actelion in Allschwil, Switzerland, completed in 2010. The facility employs a similar – albeit more linear – heap of geometric forms, fused together, forming a structural whole. 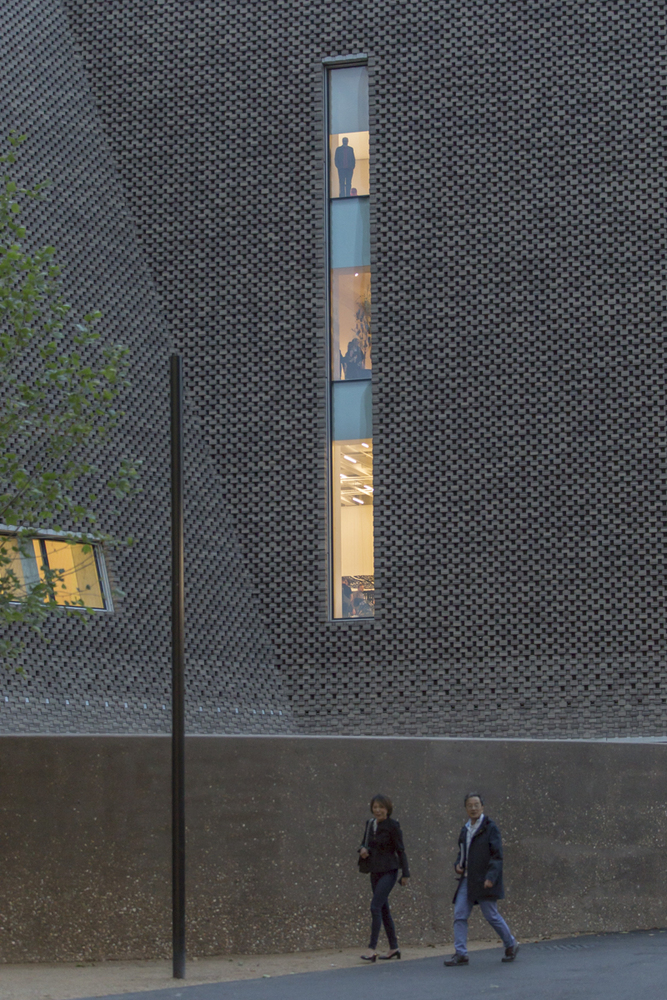 As noted by Serota, the growth of the Tate’s attendance also spurred an exponential expansion of the range and scope of works found in the museum’s collections. Describing the inaugural display in the combined Switch House and Boiler House in an interview with The Art Newspaper, Serota stated, “There is [a] much higher incidence of us showing work by women, a much broader geographical spread and much more photography. These are big changes compared with Tate Modern 2000.” Formulated in the 1990s, after the 11/09/89 fall of the Berlin Wall and before 09/11/2001, the opening of Tate Modern in 2000 came off the heels of the millennium and the optimism, inclusiveness, and prosperity, that color a decade which we might now reconsider with fondness.

Tate After Brexit: Modern as Metaphor

On the day following the Brexit vote, the photographer Wolfgang Tillmans – who was the first non-English person to win the Turner Prize in 2000 – wrote his own crestfallen reaction to the new reality and era ushered in by the decision. Tillmans expressed his own advocacy for “Remain” by designing a series of posters meant to promote popular reasoning for Europe to continue to be unified.

In his short, stream of consciousness style reaction to the vote, Tillmans describes how the Tate’s opening in 2000 seemed like the coronation to an age of openness that was cultivated during the 90s. And in retrospect, it is easy to see the parallels the new museum of art of the twentieth and twenty-first century, intent on collecting and establishing a global narrative for art, as a pinnacle achievement on a path towards greater acceptance.

Two years after the original design was unveiled, the glass-box proposal was out, and in its place, Herzog & de Meuron created a version of the extension sheared of its block-like extrusions, establishing a form that had the austerity of the original Scott building. As noted by The Guardian architecture critic Oliver Wainwright, “The faceted form of the extension is a result of the forces acting on it from all sides, sculpted by its neighbors’ rights to light and the invisible lines of protected views to the dome of St Paul’s Cathedral across the river.”

The building’s facade had also changed from glass to brick; translucence shelved for opacity. Although similar to Bankside in the of use of brick as a skin or sheet over a concrete substructure, the actual appearance is clearly distinct. The brickwork of Switch House is a lattice of double-bond bricks threaded onto steel rods, appropriately compared to “knitwear” by the architects – or in the words of Oliver Wainwright, “hung like chainmail…draped over a muscular concrete cage like a masonry veil.”

Wainwright extends his medieval analogy to the full stature of Switch House, comparing the form with one that “rears up like a defensive watchtower, there to ward off property developers from encroaching any further on the former Bankside power station.” Considering Serota’s position on the diverse mission of the Tate, and in light of the extension’s defensive appearance, perhaps we should view the construction of Switch House and the emphatic departure from glass to brick in a new light?

Considering other developments on the south side of the Thames, Oliver Wainwright recently wrote an editorial for the Harvard Design Magazine, “Fortress London: The New US Embassy and the Rise of Counter-Terror Urbanism,” in its current issue: Run for Cover! No. 42 S/S 2016. In his essay, Wainwright uses the new US Embassy in Nine Elms, designed by KieranTimberlake, as a launch point for a discussion of what he calls a new kind of “anxious urbanism.”

The design of the US Embassy is heavily driven by defensive elements disguised in its outwardly “transparent” appearance – walls made of six inch glass, a set-back and raised ground condition, steel and concrete bollards hidden in the landscape, and others – KieranTimberlake has stated that the building’s inspiration came from European castles, and thus creates a strange symbiosis with the Tate’s new appearance. While real life fortifications protect the embassy, those of Switch House – the protective layer of bricks, the slit-like windows, and the “crow’s nest” lookout on the building’s tenth floor – are aestheticized and ornamental, but the buildings do seem to share a defensive strategy protecting what happens within. What if Herzog and de Meuron’s structural choices – although only fortress-like in an iconographic sense – are in fact a metaphor for the defenses required by a museum that is promoting a de-Westernized, all-inclusive narrative for art in a post-Brexit world with nationalism on the rise? 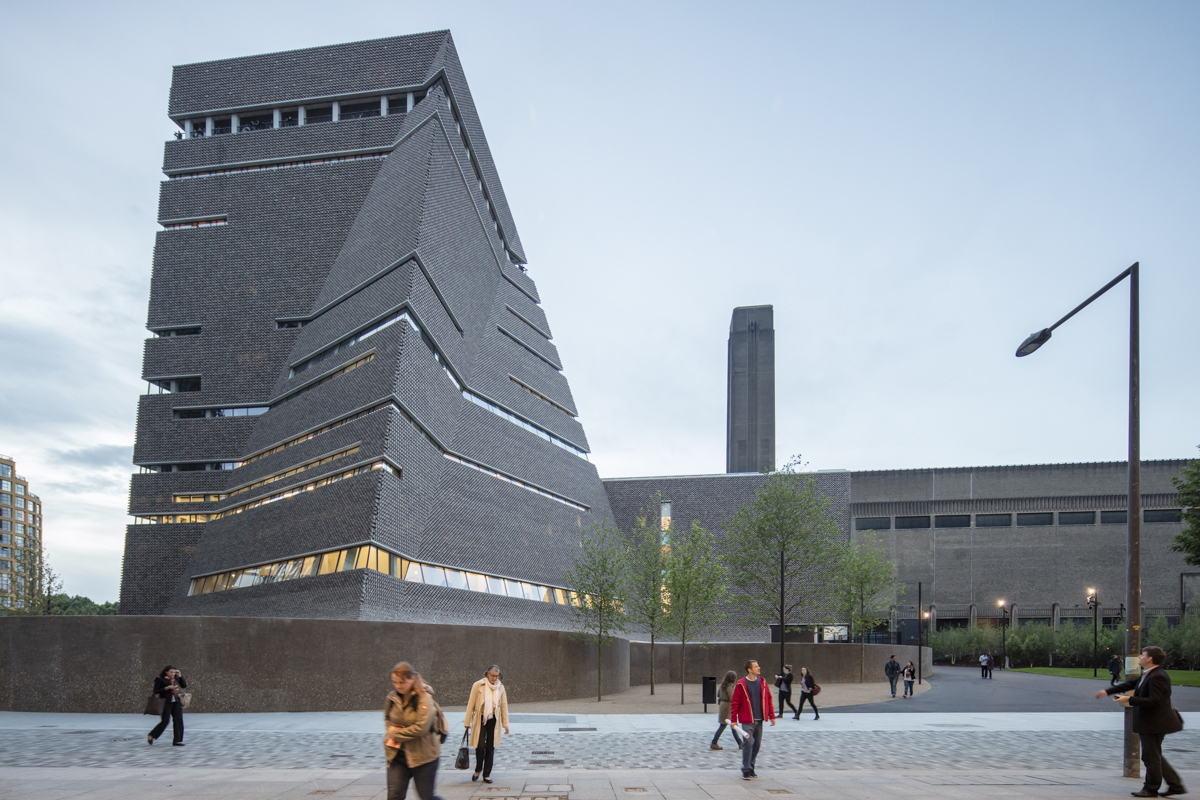 Ending on an anxious note in his essay for the Harvard Design Magazine, Oliver Wainwright discourages this “fortress urbanism” that is an opposition and obstruction to civic life, but luckily the Tate’s strategies are a mere smokescreen. Switch House proffers an image of defense as a foil for the atmosphere of acceptance that lies within. Maybe Herzog & de Meuron’s shift from glass to brick was not so much about continuity between the past and future of Bankside, but was instead a prescient decision to implement the architectural fortifications necessary for a building promoting a mood of inclusiveness that now lies in question?

In her essay for The Financial Times, “How Tate Modern transformed the way we see art,” Jackie Wullschlager expresses how in making us feel small, the Tate Modern has consistently allowed viewers to see beyond the individual: “[the museum’s] beyond-human scale exerts a particular kind of mastery: it encourages us to surrender to, rather than closely engage with, works on display. This is especially the case in regard to its immense installations, but the effect ripples on in the exhibition galleries. Counter-intuitively, feeling small brings liberation, the excitement of being swept away, not needing to judge or even make sense of the museum or the art.”

As Oliver Wainwright notes in his review of Switch House, the findings of a survey of patrons of the Tate Modern found that one of their main reasons for visiting the museum was to encounter other people – in other words, art museum as social condenser. Building on this, Wainwright admires how the museum’s new interior is equipped with nooks and niches in what makes for “a people-watching paradise.” And as Wullschlager remarks in The Financial Times, museums in the twenty-first century are “a place of encounter, social nexus, a contemporary agora.”

Switch House now appears to symbolize the chasm that has been lodged between conservative and progressive politics. The inclusiveness of the Tate may live on in its interior space, but the facade suggests that the progressiveness of the art world is something increasingly rare. It begs the question, should architecture emphasize the insular defense of these progressive visions, or seek to promote them outside its walls? 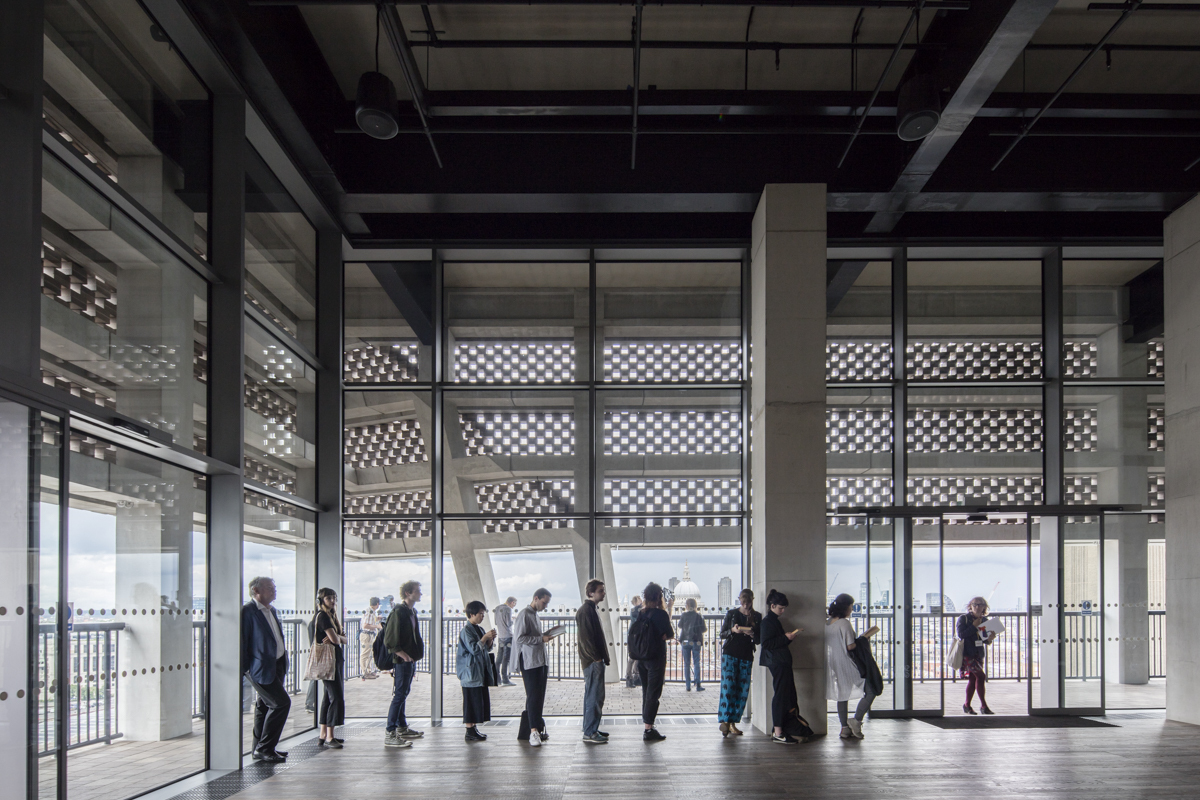 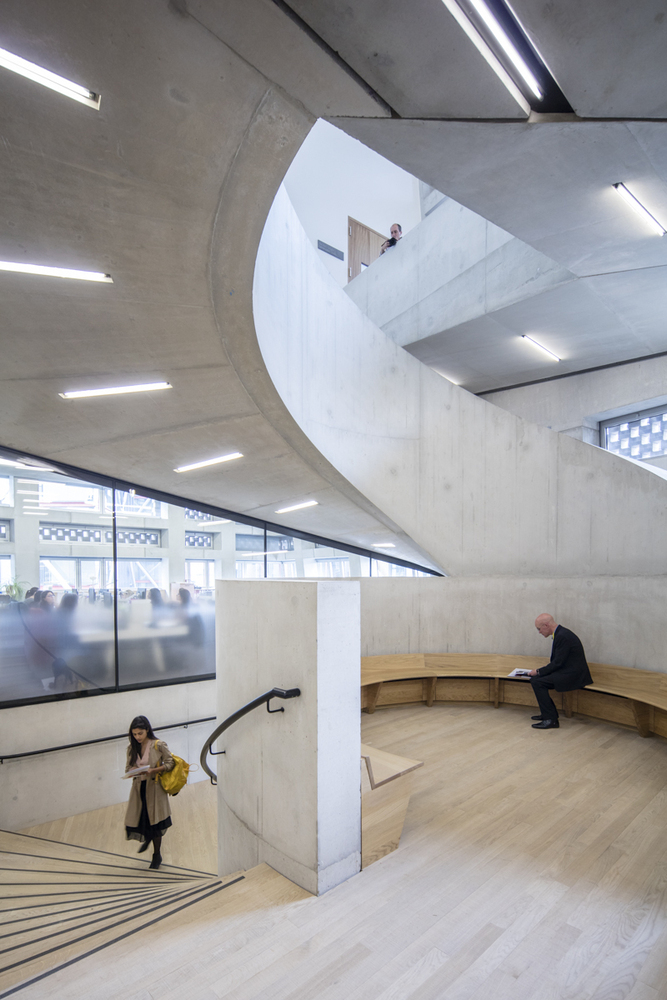 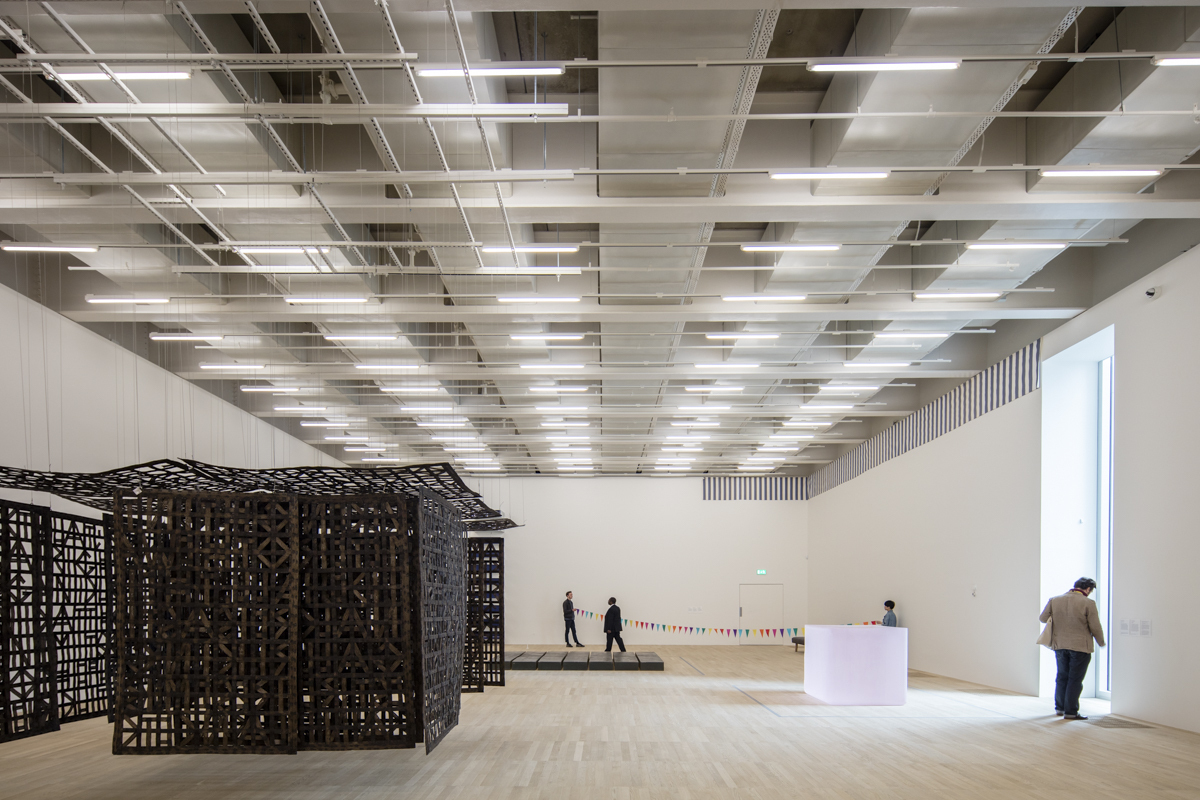 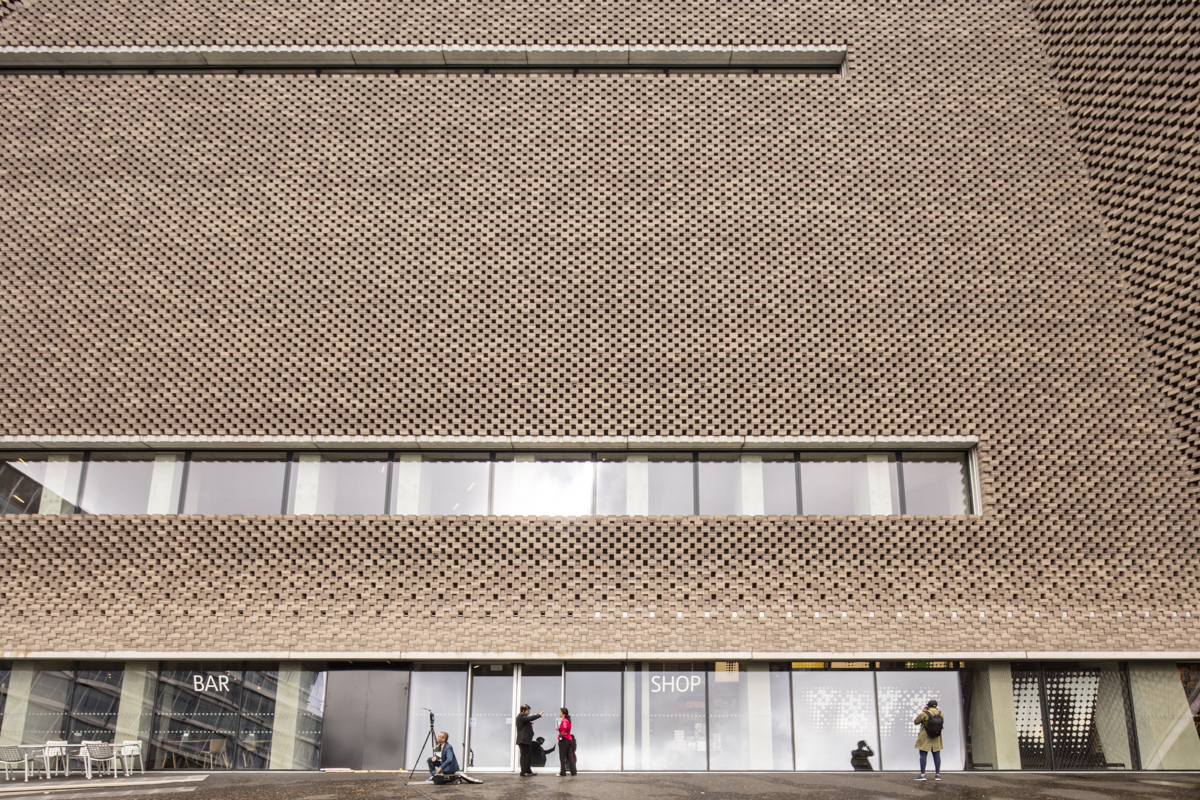 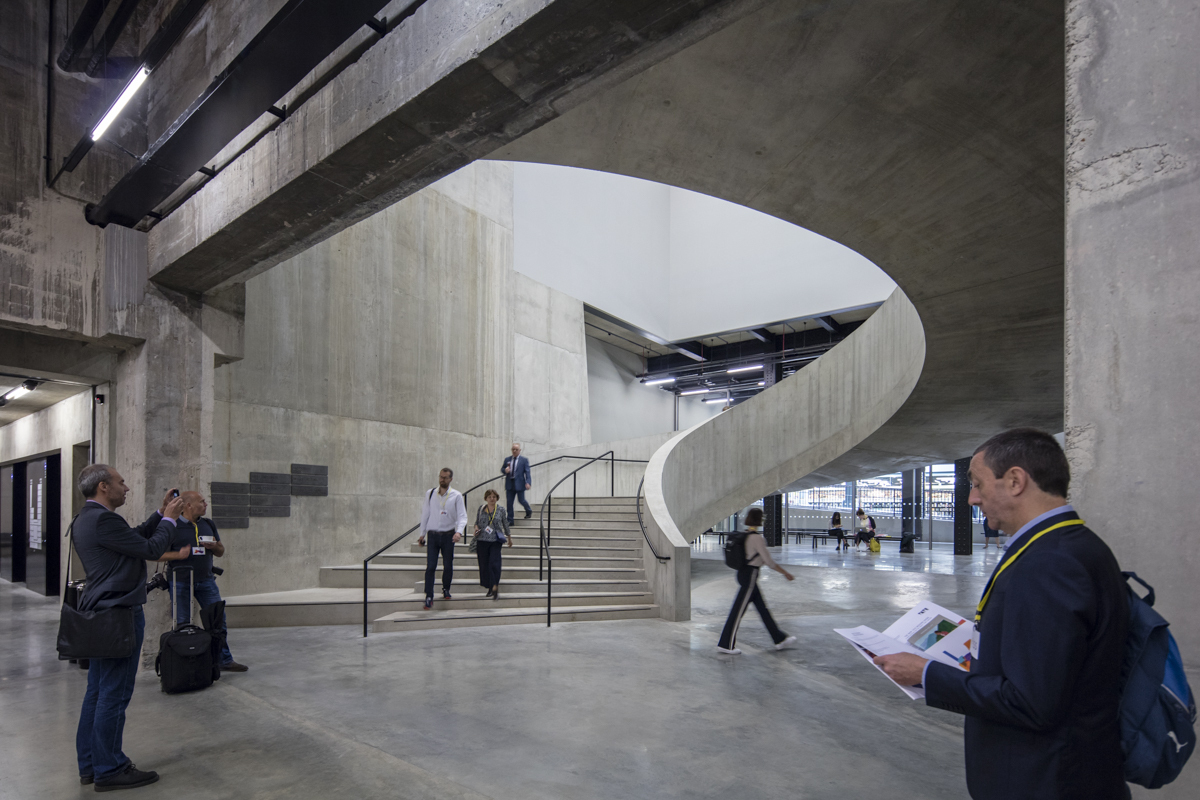 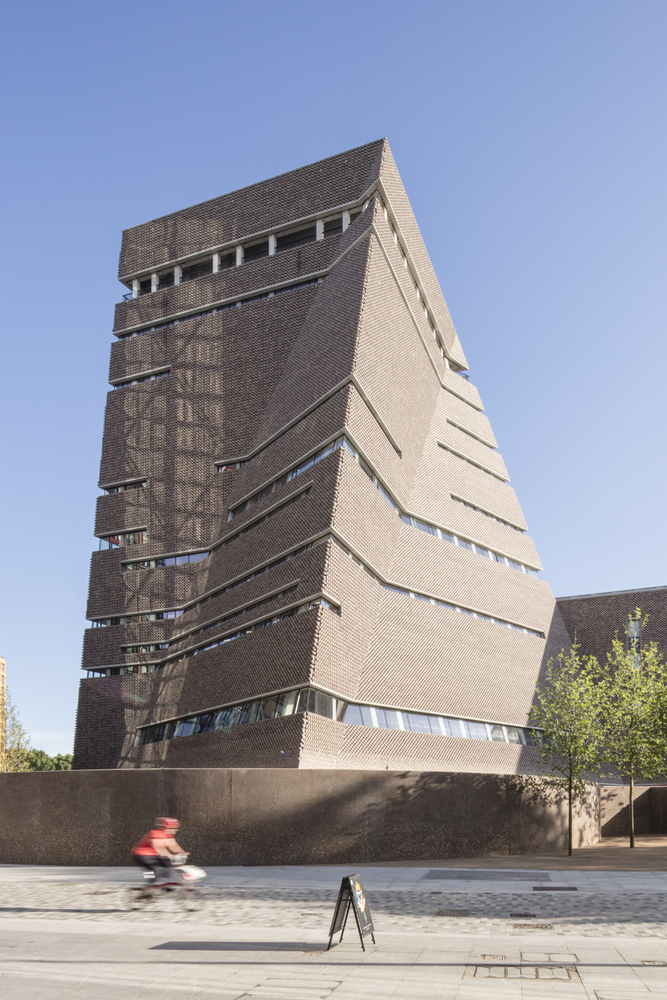 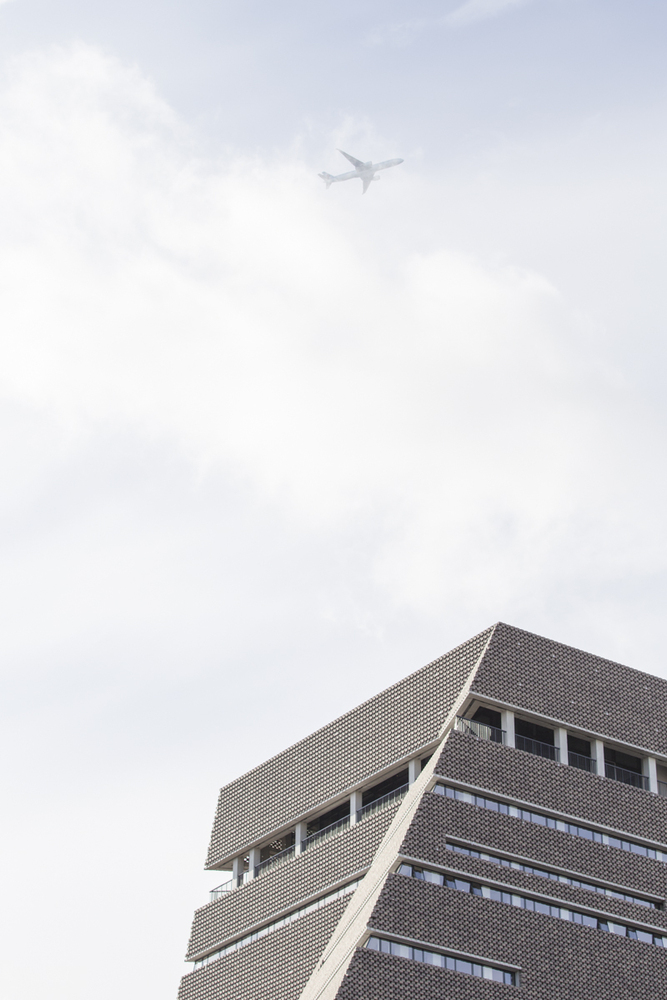