Who Will Control the Internet of Things?

On one side, giants like Google and Cisco. On the other side, Thingful and the open data movement.

The biggest users of the Internet are machines. At the end of 2012, there were 313 million people in the United States, and 425 million gadgets in the home connected to the Internet. Now add to that figure things like surveillance cameras, weather stations, navigation systems in taxicabs, and even the sensors that marine biologists tack onto sharks or farmers onto cows—devices that, like your smartphone and tablet, record and transmit vast amounts of data needed to drive their functions—and you have a better notion of just how big the internet of things (or Thingternet) is, and how valuable all this data is going to be. One estimate, from Cisco, is $19 trillion, the consulting firm McKinsey says that by 2025, the economic impact could be as much as $33 trillion. Who gets a piece of this pie, and what will they do with it?

Google paid $3.2 billion a couple of weeks ago for Nest, which makes cloud-connected thermostats and smoke alarms that have been much feted in design circles. The Economist summarized the Twitter reaction to the deal as: “HOLY cripes, Google just broke into my home.” Nest devices collect a surprising amount of valuable data—where your home or business is, and what the HVAC system is like, what the temperature and humidity in your rooms are, and the history of your preferences. Google insists this data will remain private, it remains to be seen for how long the policy will last as new opportunities develop for the internet of things market. (Remember when sponsored results started showing up on search engines?)

An alternative vision for the Thingternet is at hand. Exactly a month before the Google-Nest deal went through, a new tech company called Umbrellium launched Thingful. Much like search engines (like Google) index web pages, and thus make them searchable, Thingful indexes devices that are connected to the internet, and with the participation of the people who control those devices, make data sets available for users. If you really want to track a pride of lions who have been tagged with sensors, you certainly could. Or, alternatively, you could start a conversation with your neighbors about electricity usage in your community. 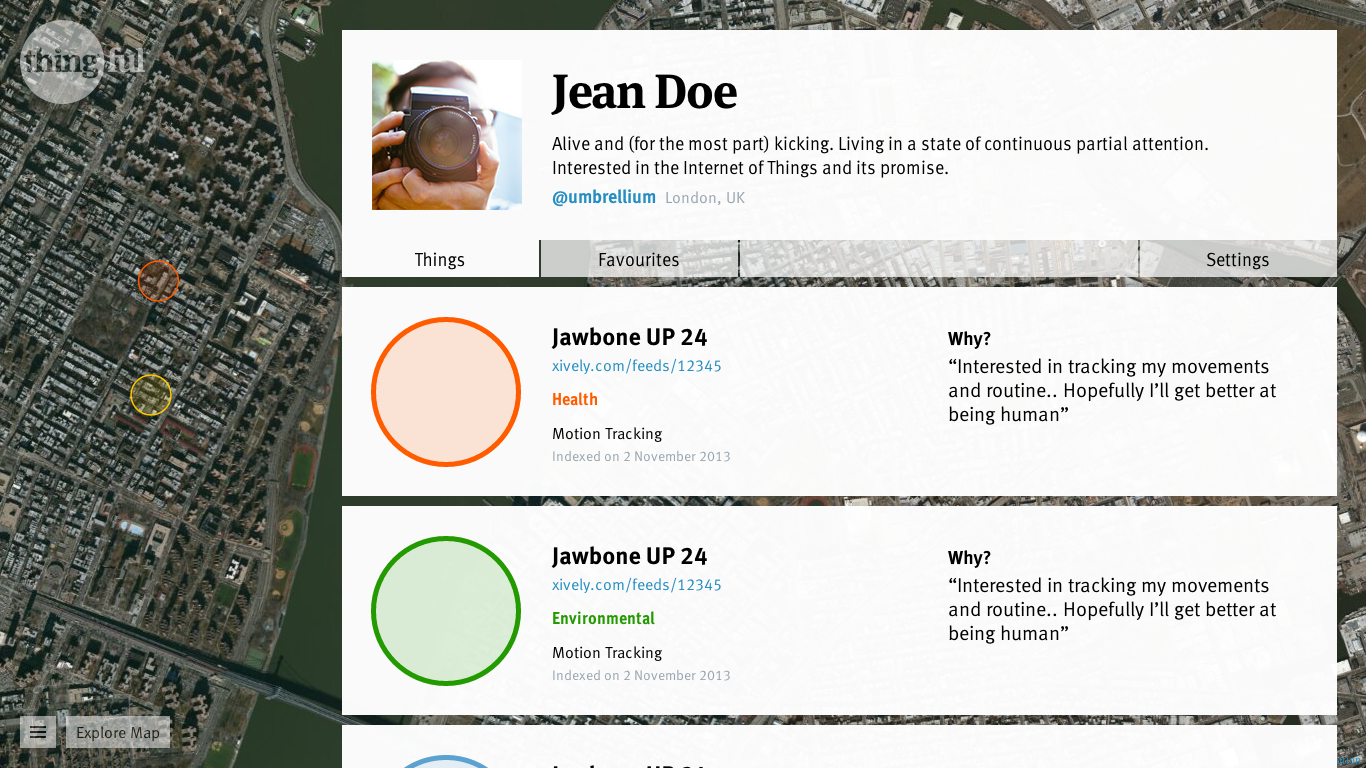 A sample profile of a Thingful user, with a list of connected devices for which she is sharing data.

This is the kind of co-operation that Usman Haque, the architecture-trained founder of Thingful, hopes to encourage. Speaking to the online magazine Imperica, Haque said: ““In the early days of the Internet of Things, the systems were geared towards technology. It resulted in a conversation around big data, where meaning is inherent in the data. I just don’t subscribe to that view. Meaning is created by people through conversations around data. In some cases, you can have analytical tools to help you to do that, but they are for people to understand the context: why was data collected? How was it collected? Who collected it? Those are the important factors for citizens, to talk about the what, why, who and where it was collected and why it is made public… and so on. That’s another layer in Thingful that we aim to provide.”

Haque has seen this sort of thinking in action before—his previous venture, a site called Pachube, was famously used by hackers and citizen activists to remotely track radiation levels in Japan during the Fukushima disaster. Thingful’s beautiful interface is a huge improvement on Pachube. Data sets and devices are represented on a map of the world, while a pop-up menu allows you to search for specific locations or devices. Users can keep track of devices by adding them to a list of favorites, or click through to access the actual data, provided by the user who “owns” it and presumably believes in the old Open Source dictum—“Information wants to be free.” Hundreds of thousands of such accessible smart objects are already mapped out on the site.

In a connected world, keeping all information private, in effect hoarding it, is of no use to anyone. The real question is whether we can take informed decisions about how the data our devices upload and download is shared and used. Google, IBM, Cisco, and the other tech giants will doubtless do their bit to promote smarter devices and smarter cities. But by making the internet of things searchable and transparent, sites like Thingful will help us be smarter citizens.