Why We Should Be Living in "Living" Houses

In the first installment of the ten-part Biophilia and Healing Environments series, the reasoning behind the human need to connect with living structures in our environments is examined.

The Biophilia Hypothesis was put forward by one of America’s greatest biologists, Edward O. Wilson. He postulated a human need to connect with living structure in our environment (Kellert et al., 2008). This, Wilson argued, was neither a simple liking nor an aesthetic preference, but a physical requirement equivalent to our need for air, water, and food. A survey of what we prefer to have in our home environment includes greenery in the immediate outdoors, indoor plants, pets and contact with other people. We prove the importance of this biophilic effect with each step we take to shape our environment so that it nourishes us.

But aside from bringing live beings into our living spaces, there are also aspects to the design of buildings that make them attractive and life-enhancing. These factors arise no less surely from biophilia — the word literally means love of life — than does having plants and animals around. While other factors play a role, key elements of successful buildings (from the user’s point of view, not the architect’s) can be ascribed to biophilia. Judging exclusively by indicators of human health, and ignoring the fame of the architect and the media hype for certain fashions, we can identify buildings by both named and anonymous architects that offer the greatest sense of well-being for their users. The structure of those buildings triggers a healing process in our own bodies, so that we consequently wish to experience such buildings as often as possible.

Two parallel strands of conjecture help to explain the biophilic effect. One source of the biophilic instinct is thought to come from inherited memory, from our evolution and development in the environment of the savannah long ago. The savannah consists of open grassland, clumps of bushes, scattered trees, plenty of sunlight, bodies of water, grazing animals, etc. Our ancestors relied on information gleaned from those characteristics to hone their capacity for survival, to learn to intuit the presence of a tiger. We first became human in that setting, genetically encoding its geometrical qualities. The sophistication of our physical and mental development progressed over millennia without losing traces of the savannah in our inherited memory and instincts.

The second source of biophilia comes from biological structure itself: the geometrical rules of biological forms with which we share a template. This structure is believed to elicit a general response in humans of recognizable “kinship” that cuts across the divide between living and inanimate form. Manmade structures with basic properties in common with our own bodies resonate, “strumming the strings” of our biophilia. Mechanisms of living structure are either the same, or they parallel the basic organization of biological systems. Biophilia, therefore, mixes the geometrical properties and elements of landscape with complex structures found in — and common to — all living forms. 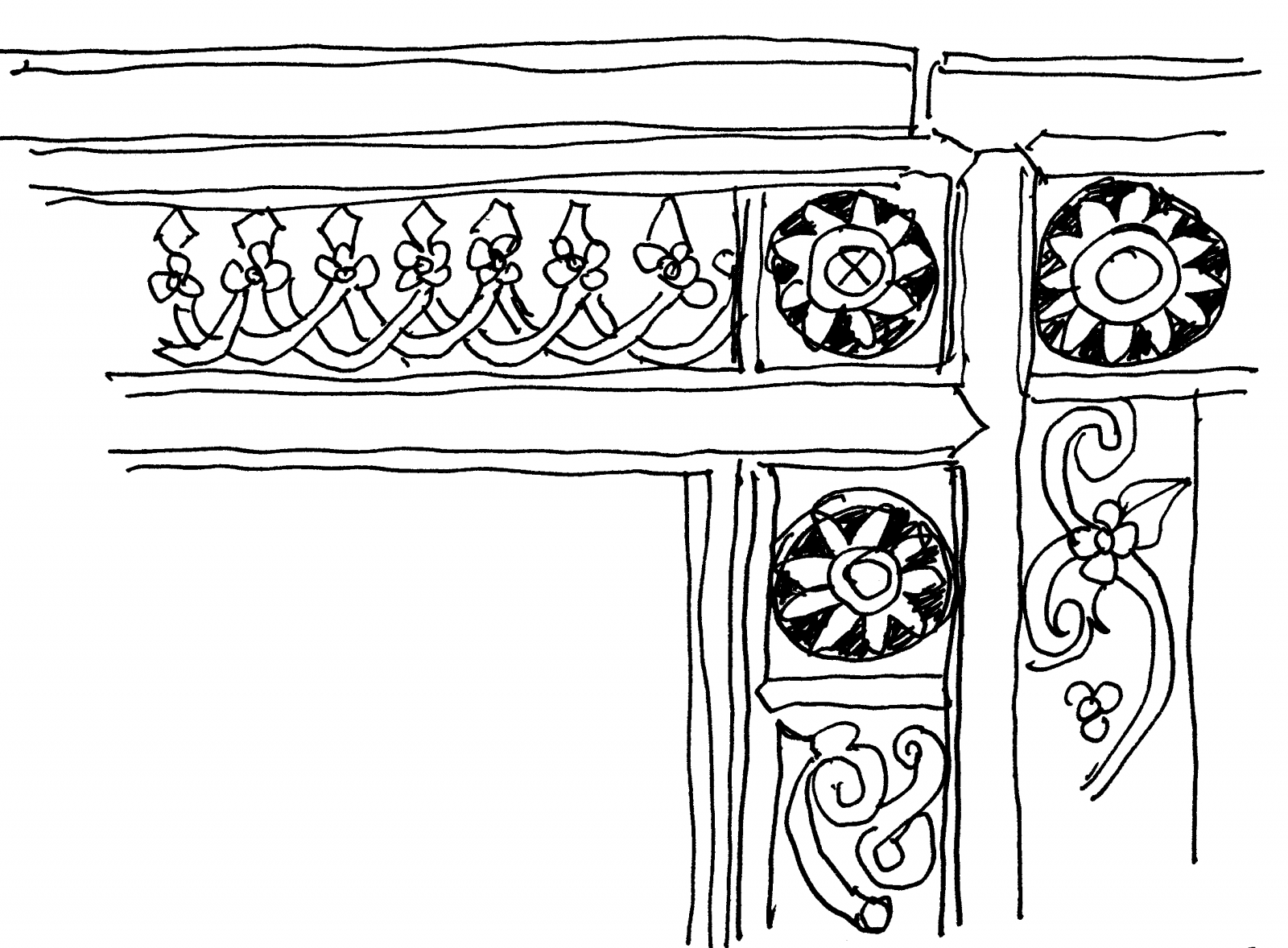 Carved ornamental doorframe. While inspired by natural forms, the human mind has introduced organization and symmetries.

Human sensory organs and systems evolved to respond to natural geometries, which are characterized by colors, fractals, scaling, and complex symmetries. Fine-tuned to distinguish positive aspects (food, friends, mates) from negative aspects (threats) in the environment, our perceptual systems generate positive emotions from surroundings that resonate with our biophilic instincts. For example, experiments in hospitals show much faster post-operative healing and reduced need for pain medication in patients with rooms whose windows look out on trees (Mehaffy & Salingaros, 2015). Hospitals and sanatoria reaching back to ancient Greece were set in natural surroundings, and part of successful medical treatment once typically included time spent in gardens and under trees.

At the same time, we constantly suffer the inverse effect of our biophilia. Our bodies signal the absence of natural geometries and structural balance with anxiety and illness. Evidence accumulates to support the traditional wisdom that warns of social and mental decline in surroundings deprived of natural features, geometrical stability, and ornamental variety — minimalist environments offering scant nutrition for our biophilic instinct. Since the advent of the industrial age, city dwellers who could afford it escaped in the summer to enjoy the health benefits of the countryside.