Will Elbphilharmonie Be Hamburg’s Guggenheim?

After overcoming all manner of delays and controversy regarding its immense cost, Herzog & de Meuron’s performance hall excels on nearly every level. 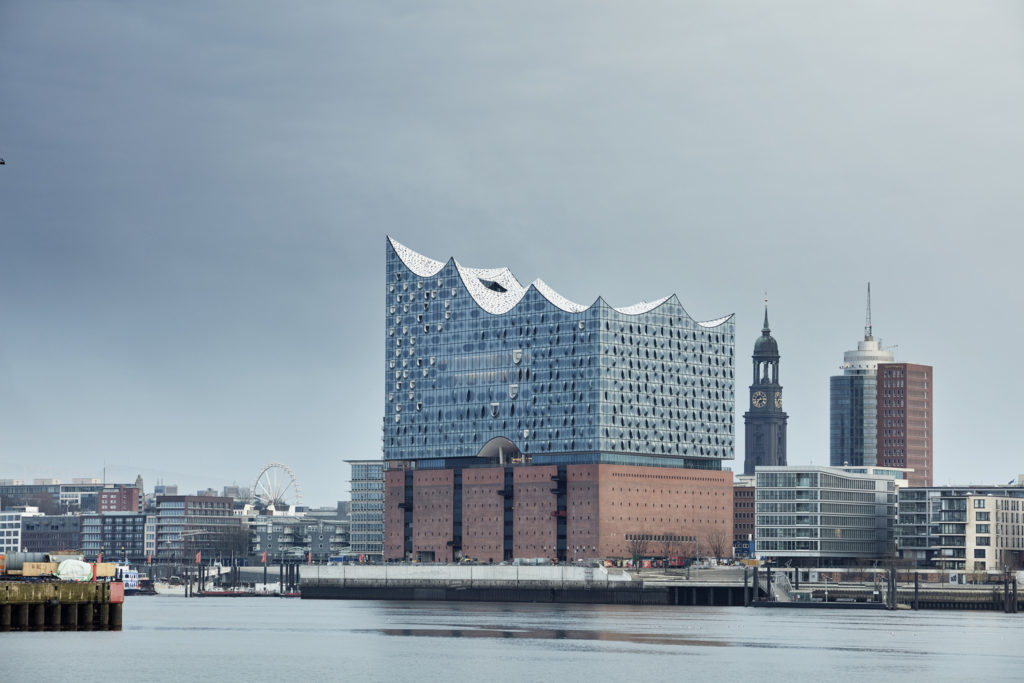 Designed by Herzog & de Meuron, the Elbphilharmonie is a unique presence in Hamburg’s cityscape.

So much has already been written about Hamburg’s undeniably excellent Elbphilharmonie, which formally opened in January but has been publicly accessible, in part, since November. The chatter has mostly revolved around the same two talking points—the building’s on-the-tip-of-your-tongue shape and its fantastic price tag. In addressing the former, critics have called attention to the hall’s resemblance to an iceberg, an outcrop, a ship, circus tents, or the Sydney Opera House. And as for the costs, totaling $900 million, they point out how the project hemorrhaged cash, even if they have inadvertently exaggerated the figures. Having momentarily lost control of the narrative, the city felt compelled to set the record straight in time for the inaugural performance: The building cost just three—not ten!—times the initial budget.

The impulse to endlessly perpetuate these hooks, to not bury the lede, is as understandable as it is time-tested. The Elbphilharmonie will never escape comparisons with Sydney or the Guggenheim Bilbao, but that is quite good company to be in. As others have pointed out, all the right ingredients were there from the start: an inimitable port site with the tasteful trappings of industry past and present (Hamburg still processes nine million shipping containers yearly); world-renowned architects, in this case Herzog & de Meuron, the Swiss firm with a high batting average; the promise of world-class cultural programming; and an underdog second city with a glint in its eye.

But stars rarely align, nor do ingredients alone make for a great meal. Bilbao became a household name and something of a late-capitalist miracle inspiring dozens of flops the world over that dared try to replicate its gargantuan success. (In any case, miracles, so far as they exist, cannot have blueprints stamped on them.) It’s too soon to pass judgment on Hamburg’s experiment, but it certainly looks the part of a winner.

Which brings us promptly back to form. More than a decade of architectural discourse has prevailed upon the profession to reconsider its social value and commitments. Architecture, the new wisdom (reasonably) goes, is not merely the end product—or shape—resulting from philosophical inquiry, construction, and spreadsheet accounting; it can also be a tool used to better the world, even to tip the scales in favor of social justice. Then here comes this great frosty mass, or something else like it, and all that just doesn’t stand a chance.

Like an iceberg, or even a baked Alaska, the building’s exposed parts conceal a great deal—a hotel, luxury apartments, performance halls, and a public plaza.

It’s neither all duck nor all shed, but something in between. Poised atop a 19th-century warehouse, the new structure is impressively buoyant, but also a little blank, an icy billboard to train the eye on but one that reveals very little about its interior goings-on. Like an iceberg, or even a baked Alaska, the building’s exposed parts conceal a great deal—a hotel, luxury apartments, performance halls, and a public plaza. Herzog & de Meuron respected the envelope of the older building, a wedge of red brick that once housed shipments of cocoa, tea, and tobacco, and simply extruded its edge lines upward. (Its deference had limits: The warehouse was gutted and refurbished with a garage, administrative offices, and a music education center, among other amenities.) A narrow midriff—a free public walkway—separates the two volumes, while a few optimistic arcs conclude the bipartite composition. More cheer: The expansive spans of mirrored glass—all 2,200 curved and flat panes of it—are enlivened with dimpled openings and a kind of building-grade glitter that reduces solar gain.

Distance is needed to really appreciate the ensemble, and there is no better vantage point than on the water, among the clamorous cargo ships moving up and down the Elbe River, in and out of the city’s busy port. Here, the glass becomes slightly more ethereal—just as it should—blurring into the forever-gray northern sky and forming a Turneresque seascape, only gloomier and less sun-drenched, with container ships swapped for the frigates.

Back on land, as you stand beneath it, the 26-floor, 700,000-square-foot complex is slightly intimidating in its seeming impenetrability—more cliff face than building. Visitors looking for the front door won’t find one. Instead, a void cut into the brick leads to ticket windows (seats in the main hall can go for as low as $16) and a suite of elevators (there are 29 in the complex). But the intended means of passage is the adjacent 269-foot-long escalator, which scoops you up in a ghost-white tunnel and bores through the building at a sedate pace, taking four minutes in total. One grows a little bored with the surroundings—the eye line is blocked by the hump of the escalator, and all that white is just that—but anticipation builds all the same, like waiting in line before an amusement ride. Finally a room appears, and as your eyes adjust to the change of light, so does a sweeping view of the harbor.

Turning away from the window and moving up a second, shorter escalator deposits you at the foot of a gentle brick mound that tapers off into the public plaza. All the architects’ ingenious knack for mystery and flair is on show here. The floor is hard and pleasingly resonant—a strange, unexpected continuity of European public squares, only you are 121 feet in the air. The effect is surreal, and enhanced by the shallowly arched, cryptlike ceiling studded with clusters of bare light orbs. The first of several chunky angled columns (canted to support the two music halls above) frames the space, while a pair of wide, languidly curved staircases, each leading to a different auditorium, center it. At the plaza’s northern and southern extremities are ruffled walls of glass, through which you pass to reach the wraparound terrace. All the elements of new and old Hamburg unfold in every direction. There is the Elbe and the working port, and on the other end of the harbor, the UNESCO-protected warehouse district, with its network of canals, picturesque and undisturbed in disuse. Directly below on the east side are the outposts of HafenCity, an $11.6 billion urban redevelopment being built on former brownfields and the most ambitious project of its kind in Europe. Better urban scenes cannot be found even from the top of the city’s too-high television tower (itself an inspired take on the preening ’60s typology).

From morning to midnight, Hamburgers can roam around all they like—600,000 of them have already made the climb—but only ticket holders can gain access to the performance halls and the often-vertiginous spillover spaces between them. The smaller hall is the more intimate and, being a simple shoebox, normative. Still, here too, there is a marker of quality and a spark of imagination: The hall’s walls are textured to a reptilian degree, with every surface covered in thousands of sound-deflecting bumps. The larger hall, which seats 2,150, is much more engrossing, possessing all the verve of and a good deal more moody drama than Hans Scharoun’s 1963 Berlin Philharmonic, whose famed “vineyard” layout Herzog & de Meuron replicated with considerable tweaks. Primarily the two halls (the third being buried in the brick volume below) rest within their own cocoons, nestled in a soundproof enclosure whose form doesn’t “bleed” and contaminate auxiliary spaces, as Scharoun’s does. The seating is more steeply arrayed, resulting in what might appear to be more than a few nosebleed aisles. Not so, say the architects, who claim that each seat is no more than a hundred feet away from the conductor. Balconies slink languorously up and down the sides of the cavernlike bowl, the idea being that concertgoers can reach their perch from anywhere within the hall. Maybe for mountain goats, but for those in the cheap seats, the route is easier diagrammed than scaled.

Then there is the grayish substance that adheres to just about every surface, extending even to the upturned mushroom cap of the sound reflector hovering above the orchestra. This endlessly variegated epidermis, elephantine in hue but not texture, was fashioned using recursive software based on a sound map developed by master acoustician and ear-for-hire Yasuhisa Toyota. A consultant on every major philharmonic building  of the past quarter century, Toyota provided the broad strokes, while the architects, in their pursuit of a solution both artful and performatively complex, left the nitty-gritty business to the algorithms. Lining the auditorium are 10,000 gypsum fiberglass panels, each one notched with thousands of concavities—and each one of those uniquely carved, varying in shape and depth. Calling it overwrought doesn’t begin to cover it, but it’s all deeply impressive. More important, the scheme performed beautifully during the opening concert, whose eclectic program certainly put it through the paces.

Everywhere, in the most random or mundane moments—the way the svelte railing moves in step with the treads of the lobby staircases, the pair of Niemeyeresque slashes in the ceiling of the main auditorium, that building-grade glitter—there is more character, more exemplary touches, than in entire other buildings. But perhaps not quite feeling. For all the public investment hurled at it, the place could be a bit more, well, public. You spend a long time passing through the guts of the complex to really get anywhere. The lofty plaza is a kind of reward—the terrace stroll certainly is—but for those without a press badge or concert tickets, it can be an experience tinged with missed opportunity, what with this hulking, mute iconic thing looming over you.

Luckily, there are attempts to ameliorate that. The current Social Democratic municipal government, which took over the reins of the unwieldy project after coming to power in 2011, sees in the Elbphilharmonie not just a tourist magnet but also a symbol of public entitlement and an educational opportunity. It has launched an outreach campaign, selling tickets at libraries and other points all over the city and setting prices remarkably low (special fares can sink to just $6). The goal is for every young Hamburger to experience one performance at the Elbphilharmonie over the next five years. In this and other ways, the building seems less of a willful imposition on the scenic waterfront and state coffers alike, as the more antagonistic observers have chalked it up to be. Instead, it feels as though it belongs.