Will the Olympics’ Failures Spark A New Urban Paradigm for Rio?

Without intending to, the trials and tribulations of the Olympics have revealed a potential, and radical, way forward for Rio de Janeiro.

In early 2013 Rio de Janeiro’s charismatic mayor, Eduardo Paes, launched “Olympic City Monopoly,” inspired by the famous board game. Players were compelled to “invest” in the signifiers of “global” Rio, such as the Marvelous Port revitalization program, the new fleets of BRTs (express buses), and the Museum of Image and Sound, among others. As one critic of the program dryly pointed out, the game’s version of chance and community chest cards were inscribed with “gems such as ‘Your property value has gone up with the pacification of the neighboring community. Receive R$75,000.’”

The Paes administration had spent R$1 million to distribute 20,000 copies of “Olympic City Monopoly” to public schools before public uproar resulted in the mayor’s dropping the initiative. Defending it at the time, his education secretary explained that “teachers can use the game pedagogically” to present the city “from a more contemporary perspective.” Of course, nowhere in the game was there an opportunity to learn of the severe implications of the “whitening” of the world’s largest slave port under the Marvelous Port urban renewal program, the slashed funding for public clinics and housing, the floods in the synthetic Bairro Carioca, the overwhelming congestion of BRTs, the dozens of cut bus lines, gentrification, nor the torture associated with the Police Pacification Unit—all byproducts of Rio’s Olympic aspirations.

Though his “Olympic City Monopoly” campaign flopped, the mayor had been right about one thing: Rio is a fine example of the contemporary city. Not because of his efforts—privatizing public assets, fostering exclusivity, seeking standardization, and obsessing over the clean—but rather because of the urban conflict that has come to a head here crystallizes, and indeed exemplifies, two opposing visions of the city that are daily being lived out around the world today.

The Monopoly City vs. The Singular City

From New York City to Berlin, Hong Kong to London, urban conflicts have increasingly erupted between two camps: on the one hand, those who view the city as fundamentally commercial, a place of economies of scale, of the agglomeration economics of the “global city.” Proponents of this vision insist that cities are essential links in a global economic system and that is what makes them important.

Then there are those who value the city for fulfilling a human need for connection and social interaction. “Cities define us,” writes political theorist Benjamin Barber, “It’s where we’re born, get educated, grow up, get married, where we pray and play, where we get old and where we die.” This is essentially the “right to the city,” what David Harvey describes as being not just shared access to urban resources but, more ambitiously, “the freedom to make and remake our cities and ourselves.”  Supporters of this vision will argue that it is incompatible with the aims of the global city and that “localization”, or strengthening locally-rooted communities, institutions and economies, is the way of the future. The latter is arguably the key solution to many of the world’s current dilemmas, if we are to believe, as Barber insists, that cities are where the most important decisions that affect people’s lives today are made.

In Rio, the seesaw has come thundering down on the side of the heavily commercial approach. A huge one-time injection of US$20-40 billion (as a result of the Olympics alone) has been applied almost exclusively toward investments that support this vision. As a result, the ugly underlying nature of this approach and the inherent conflict between these urbanizing visions has become palpable.

Vision number one can be euphemistically labeled Monopoly City. Its realization has hinged on Paes’s goal of transforming Rio into a global city, and has been made possible by the state of exception afforded by Rio’s hosting of mega-events such as the World Cup and now the Olympics. It is a city characterized by mass investment in construction—with highly publicized projects ranging from a golf course to public housing, diverse transport infrastructure to luxury developments, not to mention the future Olympic infrastructure—along with the promoting of rampant runaway real estate speculation, the suppression of dissenting voices, the exclusion of low-income groups, the building of prestige museums like the Museum of Image and Sound and the Museum of Tomorrow, and the using of market principles to justify heightening segregation, which in turn has fueled inequality and crime.

On the surface, some of these investments seem to support vision number two—what we could call the Singular City—such as provisions for public housing, family clinics, and BRTs. In fact, the primary public legacy touted by city officials concerns transportation (it’s where 55% of public investments in Rio’s Olympics have been directed), and figures have been published to that effect, reflecting the ostensible growth in cycle lanes, bus corridors, metro expansion, and, generally speaking, mode availability (access to multiple types—or modes—of transport).

Yet, according to reports such as that published by the urban research group Observatório das Metrópoles, Olympic-related investment has not been felt citywide. Rather, it has been focused in Rio’s wealthier municipalities, primarily in the touristic South Zone which now boasts an expanded metro, and the Barra da Tijuca, through which the bulk of the new BRT lines run. No public consultation was carried out, nor comprehensive plans laid out for the population, regarding the rationale or methods for plunging billions into Rio’s transportation system. The jury is still out on whether or not average commutes—the most important marker of success for any transit improvement plan—will actually be reduced.

Favelas on the Firing Line

Concerns over the city’s Olympic legacy have led to numerous government pledges to upgrade Rio’s urban fabric. In addition to transportation, these pledges initially included promises for the planting of 24 million endemic tropical trees (later changed to 34 million) to offset Olympic carbon emissions as well as the cleaning of the Guanabara Bay and Jacarepaguá Lagoon. They also sparked the Morar Carioca program, which endeavored to bring all of Rio’s favelas up to standard, from sewerage to clinics, through a highly participatory program that would pair communities with teams of architects versed in the principles of environmentally sustainable design (at his TED talk Mayor Paes declared Rio’s “aim to have all its favelas completely urbanized by 2020”).

This is significant; 24 percent of the city’s population live in favelas, over one thousand of them. But it also risks papering over the unique features of each favela, which arise from a complex brew of local conditions—from when it was settled, by whom, where in the city, to the type of terrain, the personality of its leaders, its social connections, knowledge sets, and job prospects. The similarities they do share include affordable housing in central areas, residences near employment, a mixed-use building fabric, intricate solidarity networks, and high rates of entrepreneurship. No longer are the bulk of Rio’s favelas based on slum-like conditions, illegal occupations, or precarious materials.

The most famous favela victimized by recent evictions is Vila Autódromo, located adjacent to the Rio 2016 Olympic Park, and which housed over 600 families before suffering evictions at the hand of the Paes administration in 2013. Up until that point, the entire community had remained in place due to its firm resistance to the evictions and the courts’ refusal to approve them, citing the favela’s strong legal rights (residents held 99-year leases from the state government) and the lack of need demonstrated by the city (none of the Olympic planning documents had indicated relocation of inhabitants was required). And yet the mayor vied to dismantle Vila Autódromo in order to satisfy the interests of Olympic site developers, who planned to convert the Olympic Park into luxury development after the conclusion of the Games.

Municipal authorities demonstrated their paramount commitment to removing the Vila Autódromo community, even if it meant ultimately spending well over R$200 million on relocation and compensation. In early 2014, the first residents began accepting offers to leave for new apartments nearby. Subsequent offers convinced another 20% or so of families to do the same, followed by apartments-plus-cash compensations, followed by full market-rate compensations in a number of cases. Finally, in 2015, when some 40–50% of residents remained unwilling to go, the city brought in an eminent domain decree, insisting the area must be opened up for access roads to the Olympic Park.

Monopoly City has exacerbated Rio’s spatial, economic, and social inequalities and so prepared the ground for an alternative urban order—the Singular City.

Following incredible pressure in the first quarter of the year, when 10% were still in the community, only twenty-five families held fast through April, when the City came to terms with the fact that the site would look like a war zone adjacent to the Olympics if they did nothing. The Mayor’s office then held a controversial press conference and negotiated with the remaining families to rehouse twenty in public housing to be built on the original community site. In the end, as of February July 2016, 3% of families remained.These Vila Autódromo residents continue to be very active, receiving visitors, organizing weekly events and speaking publicly of the love they feel for their community and their credo: “not everyone has a price.”

Vila Autódromo’s case has reached global levels of awareness and has been featured on mainstream news outlets in at least two dozen countries around the world. It has done wonders for humanizing favela residents, their history, and their calls for justice. It has, more than any other aspect of the Olympic preparations, made clear the true motivations of Rio’s governing elite in hosting the Games—and who the intended beneficiaries are. At the same time, Vila Autódromo has proved an inspiration to many grassroots leaders, civil and student activists, human rights organizations, and anyone who confronts Monopoly City head on.

Monopoly City has exacerbated Rio’s spatial, economic, and social inequalities and so prepared the ground for an alternative urban order—the Singular City. Rather than cities based on global markets and dictated by global trends, a Singular City is a city essentially and critically itself, whose development is the result of individual organic actions based on the belief that citizens should be empowered to take ownership of the public realm. It is a city modeled on the favela, a city celebrating informality. It would promote its unique attributes and, through careful cultivation of those attributes and citizen-led (planner-followed) channels, distribute gains across the population. It would be highly localized. Such a city has become imaginable thanks to the Rio Olympics and the options it has left us. If, after six years and tens of billions invested, Rio is arguably not better off (and arguably worse off), the bay more polluted, citizens more segregated, and transit the same, then a radically different governance style is all the more appealing.

Without intending to, the trials and tribulations of the Olympics have demonstrated the path to progressively care for Rio’s greatest psychological and physical sore spot—its favelas—and have them lead the way in modeling a new approach to city design that is genuinely inclusive and creative.

This article is an adapted essay from the forthcoming book Occupy All Streets: Olympic Urbanism and Contested Futures in Rio de Janeiro (UR Books, 2016). 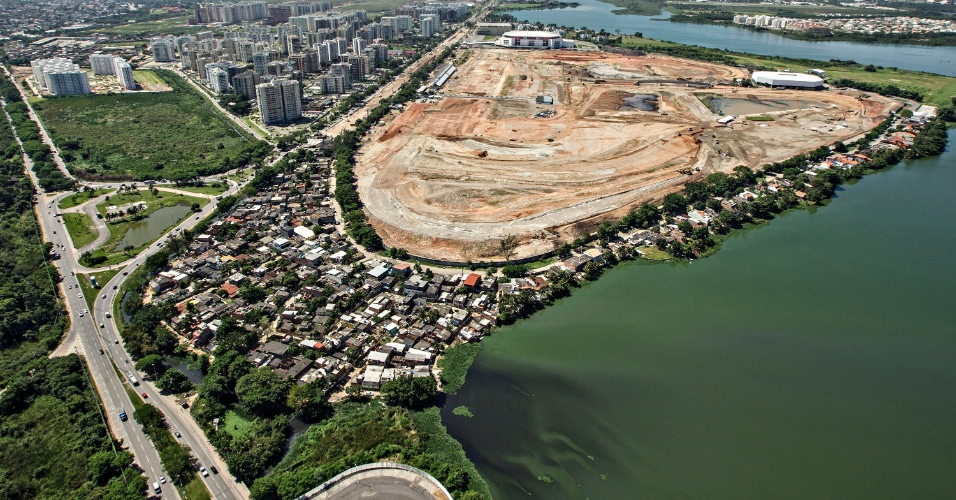 Vila Autódromo and the site of the Olympic Park (November 2014)