. Learning from Hangzhou By Mathieu Borysevicz Preface by Robert Venturi and Denise Scott Brown Timezone 8, 330 pp., $45 China is urbanizing at an astounding rate. Those of us who don’t live there might know this from statistics (like: the country consumes more than half the world’s concrete.) Borysevicz, an artist, writer, and filmmaker […]

China is urbanizing at an astounding rate. Those of us who don’t live there might know this from statistics (like: the country consumes more than half the world’s concrete.) Borysevicz, an artist, writer, and filmmaker who splits his time between Shanghai and New York, knows from observation. He spent five years in the Chinese city Hangzhou, and here he collects thousands of color photographs from that tenure. Yet, for someone who communicates almost exclusively through pictures, Borysevicz seems relatively unconcerned with aesthetics—at least in the sense that many of his photos aren’t pretty or refined and, as presented in this book, are often cropped and jammed awkwardly on the page. But that may be the point. Hangzhou is one of many fast-developing cities in the Yangtze River Delta corridor; and as it accommodates an average of over 100,000 new residents per year, it’s facing the messy reality of ad-hoc urban growth. By refraining from aestheticizing that growth, and focusing instead on Hangzhou’s many recurring visual cues—highway billboards, graffiti, construction scaffolding—Borysevicz captures the essential, if sometimes unpleasant, markers of one burgeoning Chinese metropolis.
. 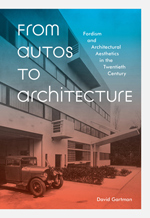 Gartman, an automobile enthusiast and a sociology professor at the University of South Alabama, marries those two disparate interests in From Autos to Architecture. The book  asks why the International Style developed where it did, in a post-war Europe whose manufacturing technology lagged far behind that of America and whose emphasis on traditional craft contrasted sharply with an American reverence of mass production. Not surprisingly, the key object in this history—and the product that most aptly symbolizes modernism and American culture in the middle of the last century—is the car. Gartman uses the aesthetics of “Fordism” and the evolving cultural reaction to that movement to explain why architects first embraced, and eventually rejected, automobile production as a philosophical and aesthetic exemplar.
. 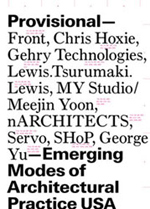 Provisional documents the work of nine American architecture firms, exploring each one’s methodology and the influence of new technologies on its practice. The book is separated into alternating sections of essays, images, and interviews with partners from firms like Gehry Technolgies, Lewis.Tsurumaki.Lewis, and SHoP. Generally, the interviews deal more with the evolution of each firm than the ways digital technologies can alter design practice on a fundamental level. (That subject, which could be at the book’s heart, tends to elicit a frustrating tautology: computers redefine the design process by redefining the design process.) Still, the interviewees have interesting things to say about their process, and they point to trends among the most creative firms in the industry. Mostly, these have to do with the increasing interconnectedness between architecture and fields like engineering and technology-consulting, and with the variety of the products that result from those collaborations. Computer renderings and diagrams, and photographs taken at various stages of project completion, help make the connection between the early stages of software-aided renderings, actual building construction, and finished designs.
. 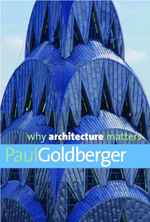 There’s something about taste—they say you either have it or you don’t—that can make a critic’s opinion seem inscrutable to the layperson. Goldberger avoids that trap in his latest book by explaining, in a language that avoids gauzy architectural-isms, exactly why he likes some buildings and dislikes others. Along the way he presents a compelling definition for what he sees as great architecture, and a review of the characteristics that make buildings important: not just their practical functions, but how they relate to memory and time and cultural continuity. Despite the breadth of the subject, Goldberger effectively satisfies the challenge he lays out for himself in the ambitious title: explaining why good architecture matters, in a clear and unpretentious manner that should satisfy those who design buildings, and those who use them.
. 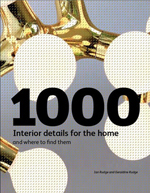 1000 Interior Details for the Home: And Where to Find Them
By Ian Rudge and Geraldine Rudge
Laurence King, 384 pp., $35

The best thing about 1000 Interior Details for the Home is that it only rarely pretends to be anything more than what it is: a very thick, very slickly produced catalog—one that includes mission statements from people like Marcel Wanders and Norbert Wangen, but is still, more or less, a catalog. The book is divided into seven chapters with titles like “Walls and Floors,” “Doors, Windows and Stairs,” and “Lighting,” each section with a neat register of porcelain-and-chrome fixtures and coolly attractive accents. The designs are all contemporary, and they generally adhere to a unified aesthetic (and, one would think, target a similar upscale market.) Not a particularly broad view of contemporary interior design, perhaps, but if you’re interested in the latest kitchen counters, or bathroom sinks, or sliding doors, this is probably the book for you.
. 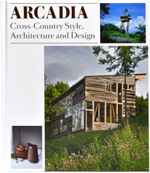 Arcadia is an alluring book in the sense that the buildings it presents, and the graphic layout of that presentation, are clean and curated and visually compelling—there are plenty of modernist boxes, to be sure, but lots of interesting new forms from little-known international architects, too.  But the photos often don’t penetrate the buildings’ exteriors, and it’s hard to shake the feeling that we’re looking at something like an architectural beauty pageant.  More importantly, though this is a book about architecture in a rustic landscape, it’s hard to imagine these buildings having anything but a harmful effect on their surroundings. (True, many of the projects feature alternative energy sources, but the impact of getting to these remote sites and building there has to raise questions about their environmental impact.)  Nevertheless, while the premise of the book might be a little hard to endorse, it’s easy to appreciate the projects for their obvious virtues: houses from firms like TNA Architects and the Dutch partnership 24h architecture push the limits of residential design, resulting in some ambitious and often beautiful work.
.