The departure of an influential figure in architectural academia and the arrival of his successor, Deborah Berke, signal possibilities for correctives. 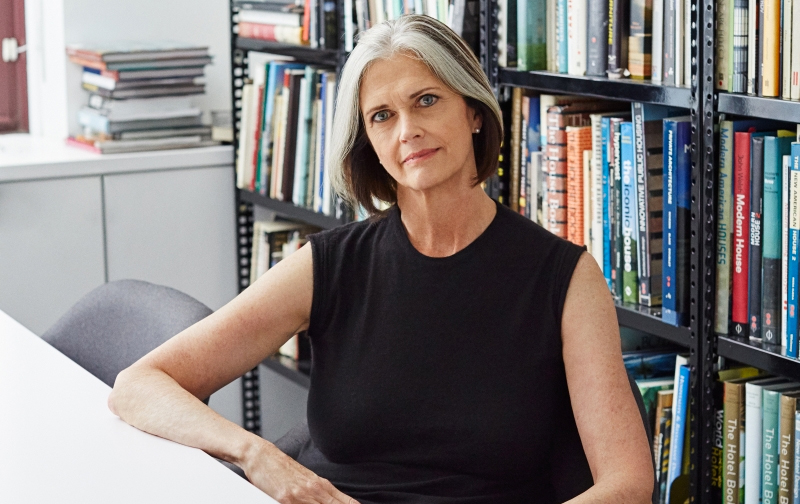 Architect Deborah Berke took over the reins of the Yale School of Architecture in July. The school’s first female dean, she follows Robert A. M. Stern, a polarizing figure who has led the YSOA since 1998.

Robert A. M. Stern, dean of the Yale School of Architecture (YSOA) since 1998, handed over the running of the school this past July to fellow architect and longtime faculty member Deborah Berke. His lengthy tenure as dean—almost 20 years—inevitably gave him the space and license to build an enduring legacy, and it is appropriate that many in the architecture world see Yale under Stern as a powerful force in architectural education. As a student there in the early 2010s, I certainly felt that I was at the center of architectural discourse. But although the school may have reached its erstwhile apogee under Stern, his departure should be seen as a jumping-off point for addressing issues of transparency, diversity, and academic focus that his tenure left open.

The restoration and expansion of the Art and Architecture Building, now renamed Rudolph Hall, to the grandeur destroyed by rumored arson in 1969 is a significant moment in the school’s 100-year history. The building itself, with its energetic plan, sectional complexity, paprika-colored carpets, and centralized presentation spaces, provides the ideal backdrop for another feature of Stern’s style of leadership: the gathering of some of the world’s most prominent architects to lead advanced studios. It is rare in a pedagogical environment for a student to stumble upon Zaha Hadid in conversation with Frank Gehry over coffee, or Elia Zenghelis and Peter Eisenman discussing plans for a midterm architectural jury,  but these types of experiences were typical at YSOA. Similarly, Stern took great pains to ensure that students and faculty were able to mingle beyond the studio, instituting post-lecture receptions on Thursdays, famously featuring plentiful martinis.

When seen together, the building, the hobnobbing environment, and the star factor all form an image of the YSOA as a unique social milieu, one in which students enjoy a certain esprit de corps along with access to their idols, and if they play their cards right, the ability to channel this access into jobs or even mentorship.

The emphasis on social interaction takes on an autobiographical tinge when reflecting back on Stern’s time at the YSOA in the early 1960s, when he learned from Paul Rudolph and was eventually ushered into the tight Postmodernist circle revolving around Philip Johnson. One can trace a latter-day attempt to reenergize Pomo methodologies in the combined presence of some of the architects repeatedly invited as advanced studio critics, with Demetri Porphyrios, Leon Krier, and Eisenman among them. Stern’s modus operandi at Yale—he often announced it as a defining characteristic of the school at open houses for prospective students—was pluralism, though one defined more through what it was not; the absence of any official point of view is the tacit acceptance of any. Given the YSOA’s history as one of the birthplaces of architectural Postmodernism (in which Stern played a large part), this pluralism often veers toward contesting formal movements or styles rather than ideologies or belief systems.

Of course, the difficulty with creating this type of rarefied social milieu is that cliques form, synergistic relationships are elevated, and simultaneously many find themselves left out; every group must define itself by those who are not included in it. While this is just as true at any other architecture school, at Yale the status garnered in the social realm translated into a loose patronage system governing many aspects of academics and student life. Getting into non-studio courses was determined by an opaque system of rankings: Students listed classes in order of which they wanted to take, and professors in turn ranked students; there were many opportunities for a plausibly deniable favoritism (surely present at many other schools as well). Similarly, in the break before the students’ final year, roughly two-thirds of the class was invited to take a summer drawing course in Rome; the third left behind was given no explanation of what aspects of their work, or personality, had been found wanting. The YSOA also awarded students prestigious monetary prizes; for many of these, too, no indication of the criteria for selection was given.

This lack of transparency in the basic functioning of the school is not the only symptom of exclusion: It is often felt (and acknowledged) that Yale does not do enough to ensure gender equality and diversity in the academic environment. To be fair, this is an essential issue in all architectural education and one of the structural problems in the architecture profession at large, but at an institution in which racial exclusion has been advanced as a potential precipitating cause behind the burning of the school building in 1969, and which has, until this year, never been led by a woman, it cannot be ignored.

Berke’s pluralism, it would seem, is one that is not just tolerant of difference but actively inclusive.

Since I graduated in 2014, students have taken it upon themselves to address these issues, founding the publication Paprika! and starting an advocacy group “for equity in the architecture profession” called Equality in Design, among other organizations. As cofounder Maya Alexander (class of 2015) says of Equality in Design: “It just started as an attempt to get students together to talk about things other than capital-A Architecture or martinis. We wanted to create a space or platform to voice concerns of the student body, whatever they might be.” And as Paprika! founding editor Andrew Sternad (class of 2016) explains, an independent school publication “allows not only increased student engagement with the administration but an outlet for our great enthusiasm for what we do. It is certainly a platform from which to advocate—most students and faculty do read it every week—but it is also a near-daily record of small moments observed, overheard, sketched.”

These groups have already had a large impact. Paprika! was instrumental as a forum to argue for extending participation in the Rome summer program— offering instruction in ancient and Renaissance history through the drawing of Roman monuments—to all students, and often challenges widely held certainties at the school, including its prized pluralism. As Daniel Luster wrote in the second issue of the journal, “Pluralism becomes a problem if the students in a school cease to develop their own understanding and convictions about what is right in architecture and instead are encouraged to suspend beliefs about what architecture should be for them.” This type of debate is fundamental to an academic environment, and is threatened when the requirements of advancement necessitate mingling, schmoozing, and buttering up any manner of authority figures, friendly or not. In other words, this discourse cannot function when success is contingent on keeping one’s own convictions safely out of sight for fear of offending an instructor who might hold the keys to your future.

Berke has already taken steps to address these issues, meeting with student groups to hear their concerns, attending Equality in Design meetings, and setting an agenda to increase diversity and equality in the school. In her introductory speech after being selected as dean, she pointedly spoke on the concept of pluralism: “Pluralism today involves a broader engagement of architecture with other cultural, social, and scientific disciplines.” She continued: “Architecture as a profession needs to look more like the world at large. […] We will build a more inclusive culture, where people of all racial, ethnic, and socioeconomic backgrounds and genders can be successful, and go on to have an impact on architecture, the profession, and on the built environment.” Berke’s pluralism, it would seem, is one that is not just tolerant of difference but actively inclusive.

Engaging with other disciplines is another skill, one that certainly is practiced in the social realm at times, but that cannot be developed by creating boundaries and in-groups. YSOA students are given the unique opportunity and challenge of working with their professional heroes, but this should not come at the cost of personal conviction, inclusiveness, or the ability to see beyond the walls of the school itself. The Yale School of Architecture now has a unique opportunity to set an agenda for the entire architectural profession by carefully addressing not only these issues but also the chronic lack of equity and diversity in schools and offices around the country. 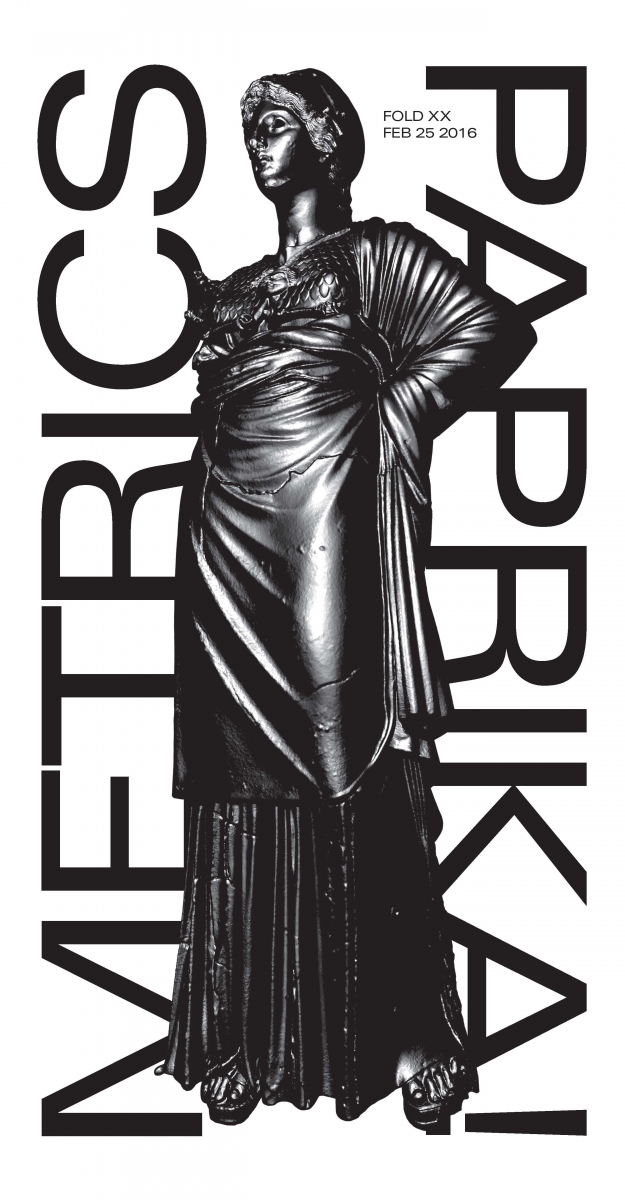 Paprika!, a weekly publication assembled by YSOA students with no fiscal support from the school, was founded in the spirit of open discourse. 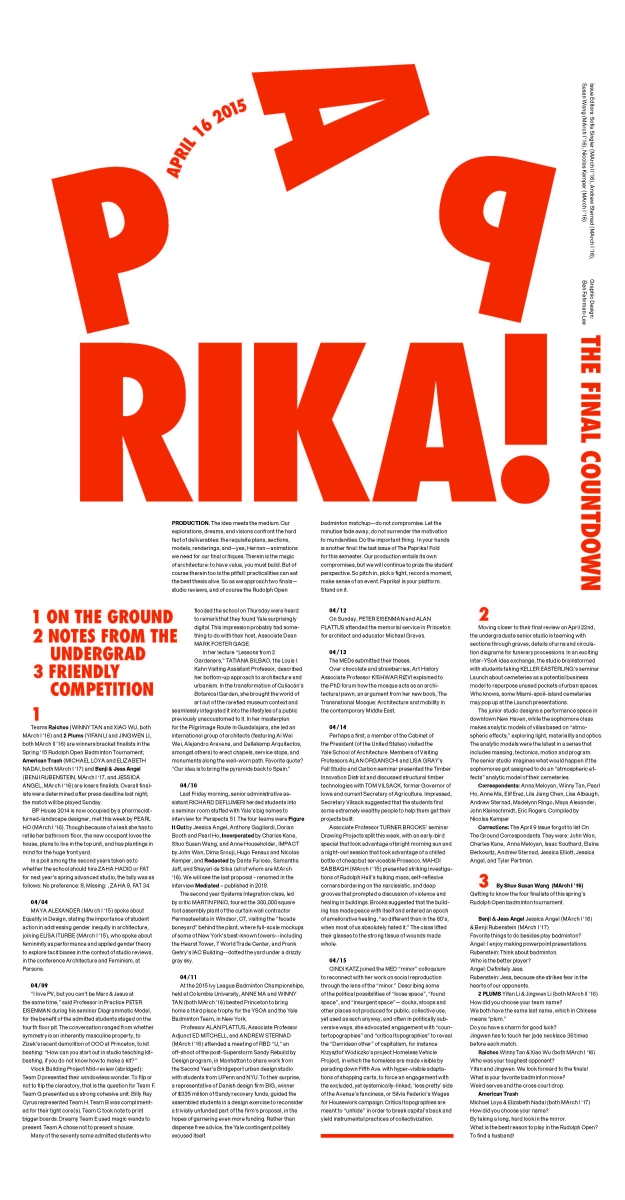 Each issue is overseen by a different team of editors and graphic designers, leading to great visual variety.