In our golden era of design events, curator Zoë Ryan talks about preparing for the Istanbul Design Biennial, the relevance of manifestos, and more. 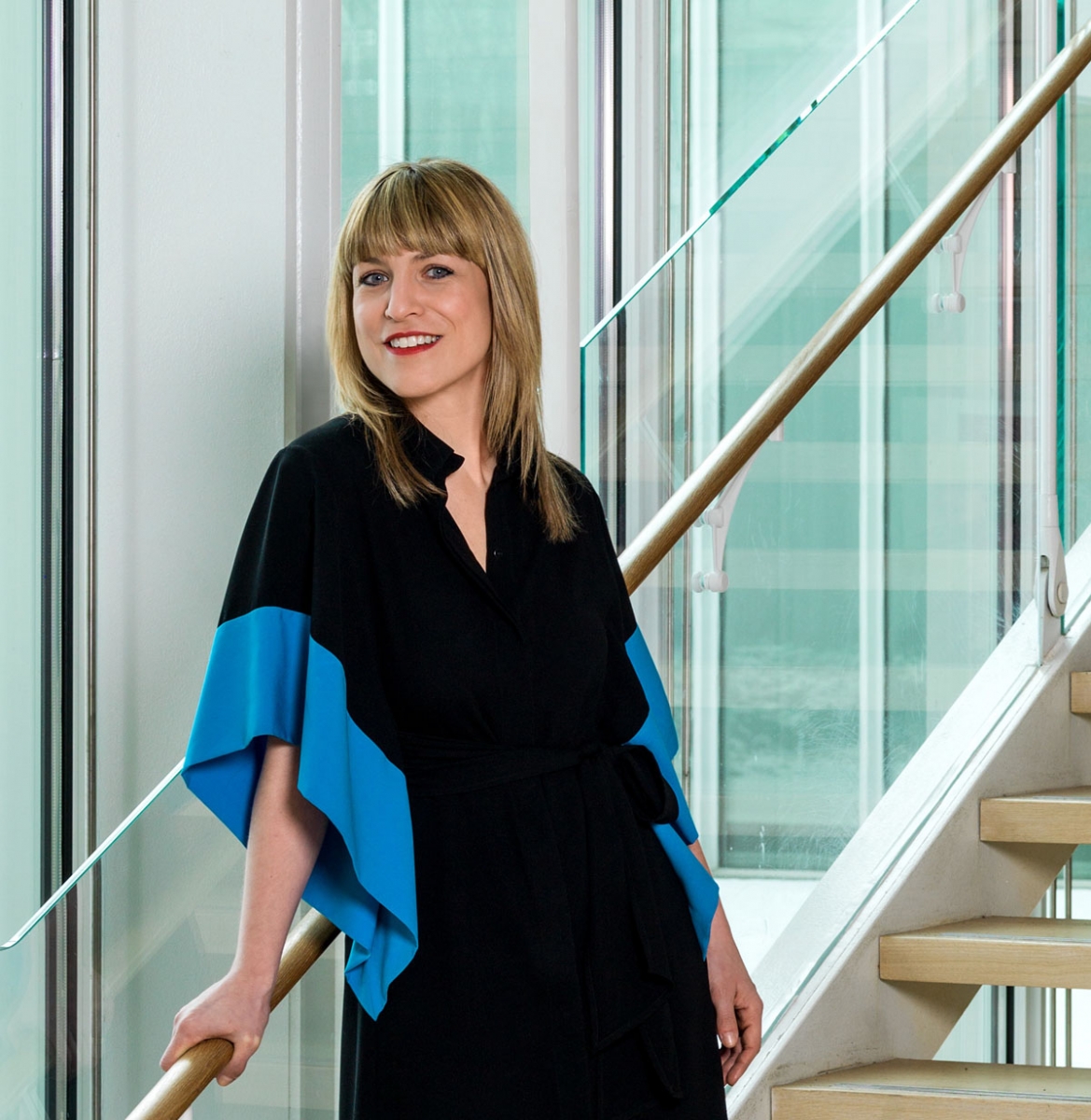 Courtesy the Art Institute of Chicago/Portrait by Cynthia Lynn

When the Istanbul Foundation for Culture and Arts called on Zoë Ryan, currently the John H. Bryan chair and curator of architecture and design at the Art Institute of Chicago, to direct the second edition of theIstanbul Design Biennial, she jumped at the opportunity. Ryan was interested in going beyond the walls of the museum and finding alternative ways to present architecture and design. She was also excited by the prospect of working in a part of the world that she had always found fascinating—Turkey. Metropolis’s editorial director, Paul Makovsky, caught up with Ryan on the eve of her trip to the Venice Architecture Biennial and quizzed her about how she came up with the Istanbul Design Biennial’s theme, “The Future Is Not What It Used to Be,” and how it is going to fare with the Turkish authorities.

When the organizers of the biennial came to you, what were your first thoughts? Aren’t there too many biennials today?

Zoë Ryan: There are many art biennials, but there are few design biennials. I was therefore really curious about what this could be as a platform for the design community. I was interested in finding out more about design talent in Istanbul and Turkey, and seeing how the biennial could uncover and share ideas coming out of the country. Rather than overlaying ideas onto the city, we wanted to first start there and find out what architects and designers in Turkey thought were critical issues, and how they were addressing them. So we began with a period of research, meeting as many people as we could, asking them questions, and getting feedback.

And how did you come up with the theme “The Future Is Not What It Used to Be”?

We asked ourselves: What do we envision the future to be now? What is the role that design and architecture can play in pointing to new directions and outcomes that take into account the complexities of the time in which we live?

When we began working on the biennial, we spent the first few months going to Turkey and meeting with many architects, designers, curators, professors, researchers, and other creative people in the city (at last count more than 100, including some fantastic chefs who really see their work as food designers, a number of whom will be in the biennial). Of course, it was also a very intense period last summer, with the [Taksim] Gezi Park uprisings and the protests in full force. There was a lot of emotion, and discussion about the role of architects in these moments of crisis. The community was very generous with us. Based on this, we feel that the best outcome would be a biennial that the community can galvanize around. Through our conversations, we already had the idea of manifestos as platforms for new thinking. And yet, we wanted to make sure that it would resonate with this audience at this particular moment in time, given the social and political situation. It became very clear, however, that this community still felt that there was a moment for big and small ideas. Architecture and design had a role to play and could have agency to make change happen—but perhaps not in the way we might have expected in the past. We developed a kind of road map of these issues that stayed with us when we started to look at the projects for the biennial.

Do manifestos actually result in anything concrete that makes society better? Is this a format that still has relevance today?

Well, the word “manifesto” means to bring out into the open and to make manifest. Manifestos emerge at really significant moments, where there’s this need for rapid change and a lot of questioning is taking place. However, manifestos have typically been claims made by loud voices, from a Western, primarily male perspective, without thought to positive or negative consequences. So we keep asking ourselves what role a manifesto can play today, not just in pointing to new directions and outcomes but in proposing alternatives. Can it be more of an open system? Instead of being oppositional, can it be propositional? Instead of being utopian, can it be much more grounded in everyday reality? We had an international call for ideas and got almost 800 responses from all over the world, and we selected about 60 projects that we are currently working to develop. Included in this are many new commissions, which is an important part of the biennial—we want to help seed ideas and stimulate new research. 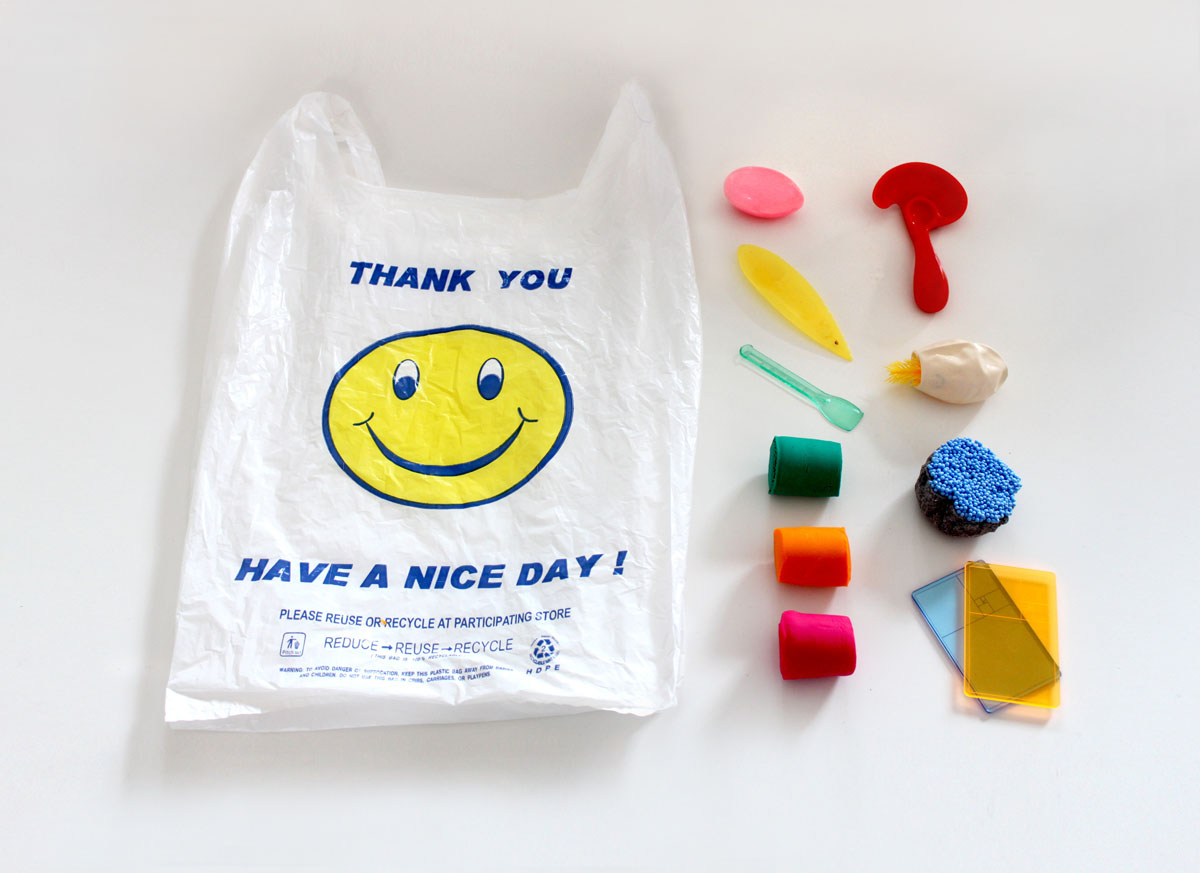 For their project, New Survivalism, Jessica Charlesworth and Tim Parsons are developing “bug-out bags” for different scenarios. This responds to a real need in Turkey, where people recently suffered during an earthquake.

What are some of the projects you have selected?

The biennial will begin with projects that look at the idea of the self—issues of personal identity, individuality, and heroism, which are fundamentally tied to the idea of the manifesto. As you move through the spaces of the former Greek school building that will be the hub for the biennial, the projects grow in scale, dealing with issues related to social practice, nationhood, statehood, and the rural/urban divide. In the first part of the biennial, there is a project called New Survivalism: Alternative Bug-Out Bags by Jessica Charlesworth and Tim Parsons, designers who are looking at everyday surivivalism and are developing “bug-out bags” for different scenarios. In Turkey, a large percentage of the population apparently has earthquake kits that they keep in case of a natural disaster (many people recently suffered from an earthquake in the country), so this project responds to real needs.

Other projects deal with recuperating history and looking at our cultural and material resources for inspiration. Graphic design studio Abake is going to be building on its research-oriented approach with a project about local traditions and rituals in Turkey.

DisturbATI, an Italian collective, is creating a project that critiques the manifesto. It is setting up the ABC Manifesto Corporation Writers and Consultants, who will be personally making manifestos for people on demand. Atelier Bow-Wow will be doing a communal drawing focused on the site of Galata Bridge in Istanbul, working with students from Tokyo and Istanbul.

In addition, there are three projects that we are calling “Back to the Future.” They each deal with a different aspect of the idea of the manifesto. The first is the idea of communication and distribution, which was essential to the success of the manifesto—Cenk Dereli and Yelta Köm are going to be running Kontraakt, a broadcasting station in the biennial that will have an online TV show and radio station, and will bring together groups for programs and workshops with the aim of rethinking communication and distribution in architecture and design, especially in light of social media. 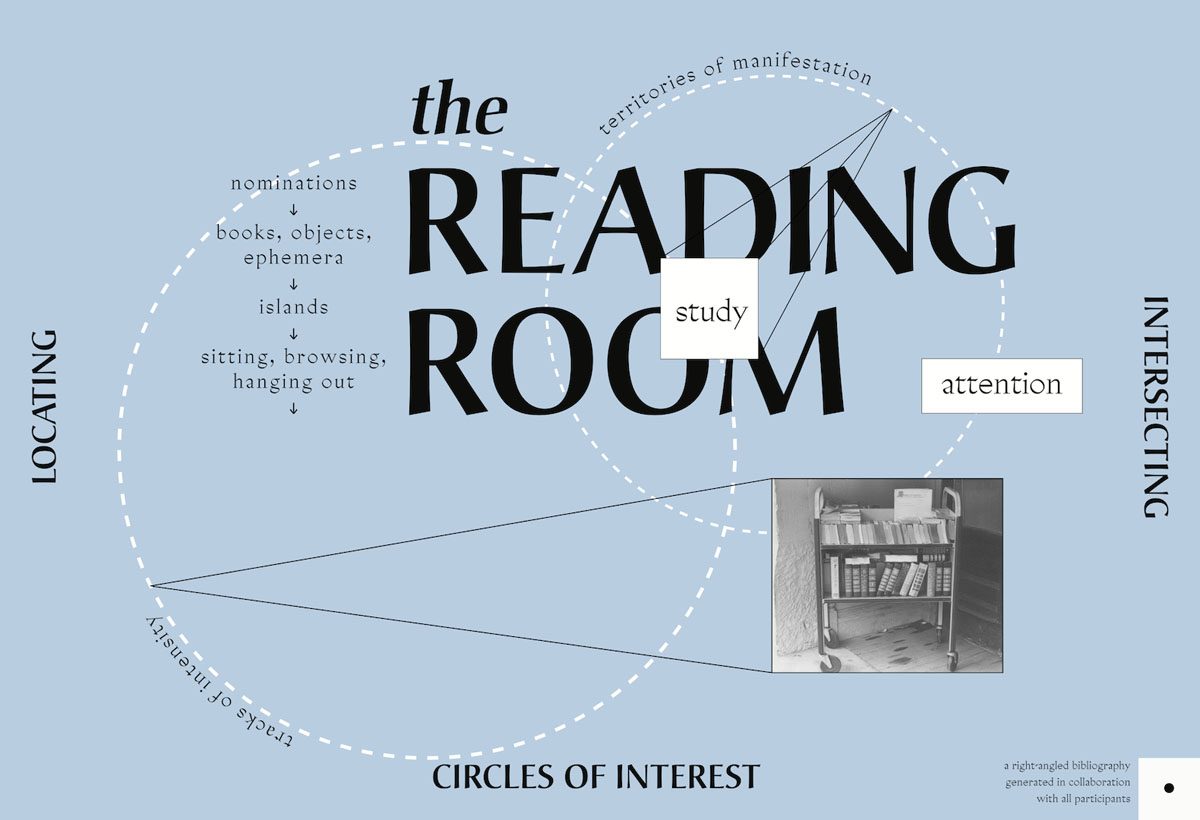 Can and Asli Altay’s reading room houses manifestos curated from all the participants in the biennial, as well as an invited group of critics and theorists.

Courtesy Can and Asli Altay

For the second project, Can and Asli Altay will be creating a reading room with recommended manifestos curated from all the participants in the biennial, as well as an invited group of critics and theorists. We also plan to set up a book club, a children’s storytelling hour, and other programs.

And the third project is one I’m working on with researcher Maggie Taft and associate curator Meredith Carruthers, where we’re looking at the history of exhibitions as manifestos. We are identifying pivotal exhibitions post-1945 that brought together critical ideas and paved the way for new directions in the fields of architecture and design. We are interested in how these exhibitions were alternative platforms for disseminating ideas. 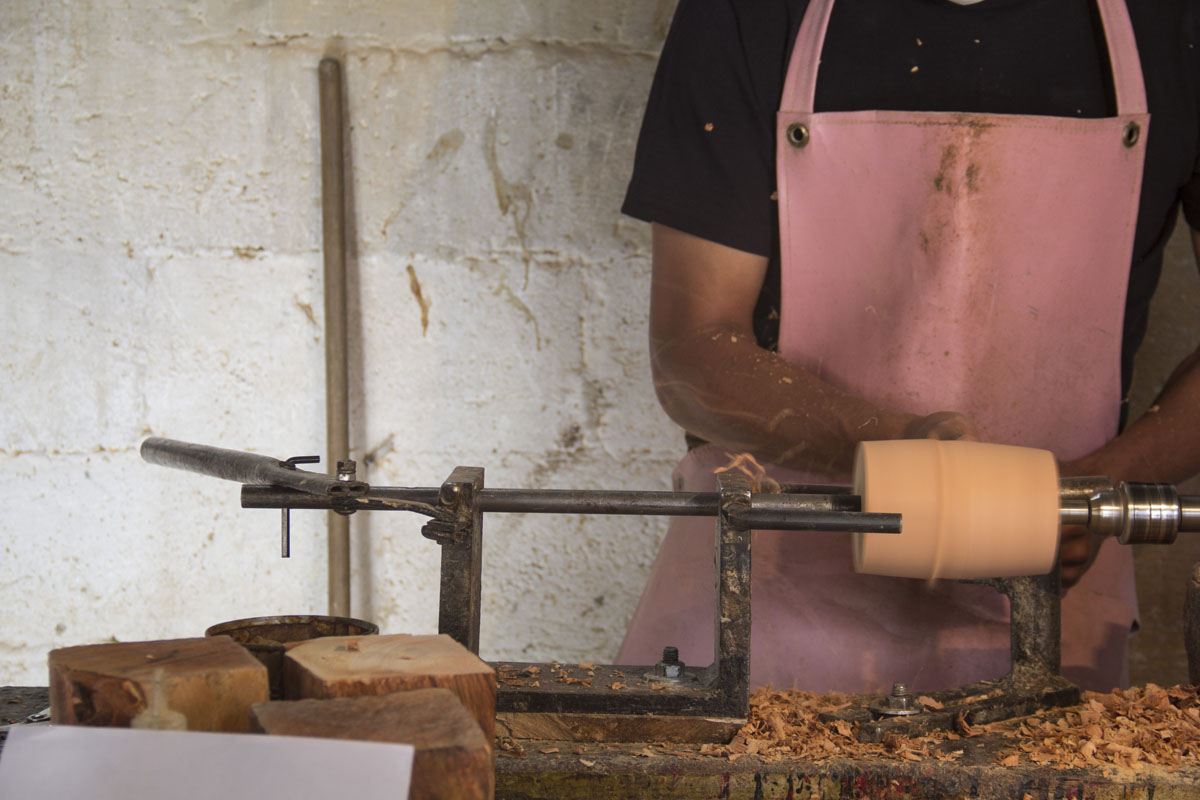 As part of his Diario project, Mexican designer Moisés Hernández has been making documentary films about the craft techniques in the local communities he works with. “The films make visible the relationships between designers and makers,” Ryan says.

How do you think this biennial is different from the Venice Biennale (which is almost like the Oscars of the profession)?

Our biennial is going to be thirty percent Turkish. It is heavily focused on design, although works of architecture and projects at an urban scale are represented. What has been interesting for us is to understand what the idea of the manifesto, a modern concept, means in Turkey. Esra Ackan, a Turkish architectural historian and professor at the University of Illinois at Chicago, has been uncovering Turkish architectural documents—many of which have never been translated into English—and we are excited to be part of a process that might also bring some of these documents forward for a new readership. We are interested in challenging existing chronologies and adding new points of view to the Western narrative of Modernism. 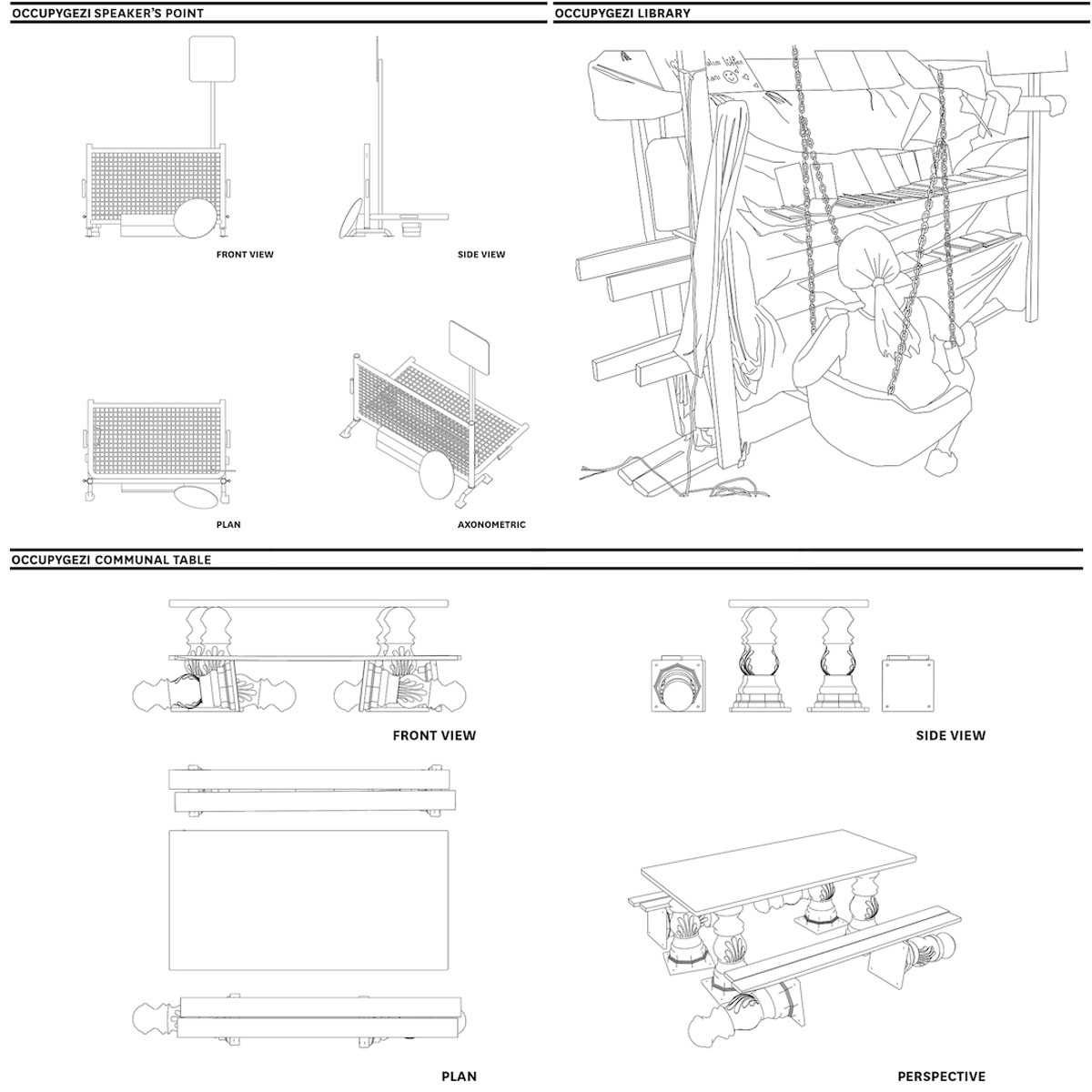 A zine by the Turkish collective Architecture for All pulls together illustrations it created of all the informal furniture, playgrounds, and library space that protestors made during during the Taksim Gezi Park uprisings in 2013. “The drawings are manuals for how one might create these informal designs using found materials and objects from the streets,” Ryan says.

Courtesy Architecture for All

As we do this interview, the Guardian recently reported more clashes between demonstrators and police in Istanbul. How do you think this biennial is going to fare against the authorities?

All the projects deal with real issues that are impacting architecture and design. The unrest in Turkey is not limited to this country, but is happening all across the globe. We’re going through a period of great change everywhere, which the biennial will reflect. We want to provide a platform for designers and architects to have their voices heard. Many of the projects question the role of architecture and design—they are about raising issues and fostering dialogue. We hope that we can seed a rich conversation. By doing an international call for ideas, we wanted to engage a diverse set of viewpoints and position ideas within this larger context.