After Venice and Chicago, Oslo’s Carefully Curated Triennale Stands Out

The sixth edition of the Oslo Architecture Triennale addresses themes of belonging in a world where dislocation and alienation are the standard. 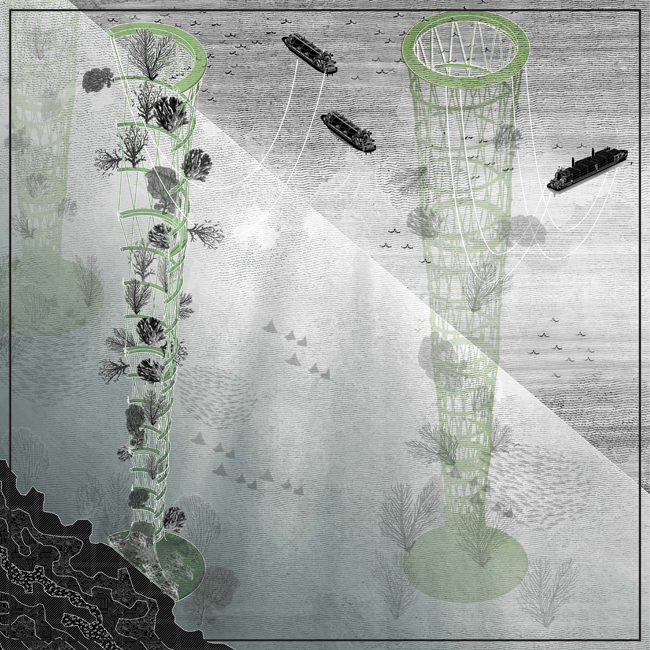 This year’s Oslo Architecture Triennale (September 8 to November 27) comprises two exhibitions: In Residence, consisting of speculative intervention strategies for ten global cities; and On Residence, a nuanced reading of architecture’s role within the contemporary world. The project Pacific Aquarium (above) falls into the latter.

Browse through the top headlines of 2014, and a few proper nouns stick out. Airbnb, voted Inc.’s company of that year, found itself burdened by a spate of “horror stories” involving squatters, hustlers, and drug pushers. The Syrian refugee crisis loomed over landing pages, and yet this retinal exposure failed to elucidate the unimaginable scope of the event. The campaign for an independent Scotland failed, and scientists ever dutifully gave witness to the Arctic’s deterioration. Meanwhile, architecture’s biggest tent-pole event, the Venice Architecture Biennale, mulled over the hermeneutics of its own modernity.

For the future curators of the sixth Oslo Architecture Triennale, opening September 8, all these things were interrelated. That fall, the five-person team—Ignacio G. Galán, Carlos Mínguez Carrasco, Lluís A. Casanovas Blanco, Marina Otero Verzier, and Alejandra Navarrete Llopis—was awarded the triennale curatorship on the strength of a proposal that sidestepped overtly disciplinary concerns. Instead, the collective probed the depths of what it called “belonging,” a catchall term for the “way we define our relationships and our attachment to places and objects,” explain the curators, who elect to be cited in the aggregate. Their keen awareness of broader social and online shifts—and their aim of finding the architect’s place within them—is reflected in their densely layered program, consisting of local and satellite exhibitions, a slew of case studies and city reports, a conference, and small-scale realizations. These all jostle for space under the banner of After Belonging, a theme evoking property loss, late-capitalist anomie, and the unshakable placelessness resulting from living most of our lives online or in “a time defined by mobility and transit.”

Whereas most biennales and their cognates afford participants just a small window in which to respond to a laconic prompt, the Oslo Triennale offered the group the luxury of time, perhaps too much of it. In the years since the fall of 2014, the sneaky topicality laid out in the After Belonging brief has morphed into hot-button subjects within the architectural profession. Refugee crises, drone politics, blockchain technologies, identitarian plurality, and the exigencies of statecraft are now fashionable terrain for architects, as this year’s Venice Architecture Biennale and 2015’s inaugural Chicago Architecture Biennial readily showed. The difference at Oslo, the curators insist, is the general aversion to “solutions”—there would be no $8,000 starter homes, as in Chicago, or new tectonic feats with folksy materials like brick, as in Venice. Instead, they say, the model was discursive: “It was very important for us to curate all the conversations that we were having with the 100 participants [in the triennale] and to really discuss with them the topic in specific terms. In that sense we were able to take seriously the idea of curating.”

Curating can be a slippery thing because the term has been absorbed into the internet lexicon and is taken to mean anything from personal scheduling (#adulting) to fiddling about Instagram to planning a dinner party. Generally, it tends toward the production of “experiences,” a euphemism—not unlike “belonging”—that services like Airbnb and its ilk have been keen to exploit, no doubt in part because it taps into a latent utopian impulse. (Surely, a world without compulsory work would free up time to “curate” one’s life according to wishes for travel, consumption, and actual fulfilling labor.) In fact, the sharing economy inflicts great economic costs, as the curators noted in a graphic last summer that ventriloquized the city of San Francisco: “Dear Airbnb…think you can pay us back the $250 million or so you’re costing our schools, parks, libraries, and businesses?”

Cher, a Copenhagen-specific digital platform akin to Airbnb or Turo, allows users to monetize their possessions for short periods of time, part of the In Residence portion of the Triennale program.

The transmission—one of the many released through After Belonging’s social media feeds in the past 15 or so months—teased an international competition for “intervention strategies” that implicated architects in issues lying conventionally outside their purview or, just as likely, those they’ve historically abandoned. This disciplinary expansion informs the first of After Belonging’s two subgroupings, In Residence, which paired the winning designers with ten sites around the world. (It’s also part of a conceit to break the triennale out of its Oslo echo chamber.) One team based in New York has developed a Copenhagen-specific sharing platform called Cher capable of bartering or monetizing every object in a person’s home. Short on cash? Rent out your fridge or a record player. Or instead, lend them out—the terms of exchange are up to the user. Less rhetorically, two groupuscules will prototype reception centers to better handle the streams of refugees entering Norway. The design of space, these architects seem to suggest, can alleviate even the most lethargic of bureaucratic processes. In yet another nuance, the curators have also commissioned journalistic reports from architects and artists residing in each of these cities, to be featured in an exhibition at the National Museum. The hope, they say, is to generate a “complex social and cultural picture” of these sites of interest.

The triennale’s second thematic, On Residence, elaborates on this documentation method. Less geared toward calls for action, it’s both ruminative and more open to the creative appropriation of fact. A daylong conference pegged to the vernissage and to be held at the Oslo Opera House will debate the problems of migration and ecological decay, among other matters. Unplanned-for events such as the Brexit referendum—and the challenge to free movement it presents—will also manifest themselves in the talks. Meanwhile, a second exhibition at the DOGA Norwegian Centre for Design and Architecture will display loosely architectural projects that polemicize the exhibition’s otherwise analytic contents. For instance, a fanciful scheme by the Cambridge, Massachusetts–based practice Design Earth recommends the partition of the Pacific Ocean by fracture zones. Doing so, the designers say, would spike deep-sea mining efforts and so preserve the nearly 11 million square feet of ocean floor therein. Until then, the seas lie vulnerable to further despoliation.

As is evident, the twofold program stretches the dialectic of place (in and on) to parodic extremes. Yet despite its equivocating configuration and the curators’ sometimes impenetrable language (they wisely avoid invoking the empty signifier of “neoliberalism” but often make ungainly use of the plural form—see “architectures” and “evidences”), this triennale avoids making cut-and-dried distinctions. Rather, the team is expanding the powers of the architect in the contemporary world: “We are bringing to each of the sites two figures of the architect—the one who reports on what is going on and the one who is intervening there. We believe that the role of the architect can operate on both sides.”

The Oslo Architecture Triennale opens September 8 and will remain open through November 27. 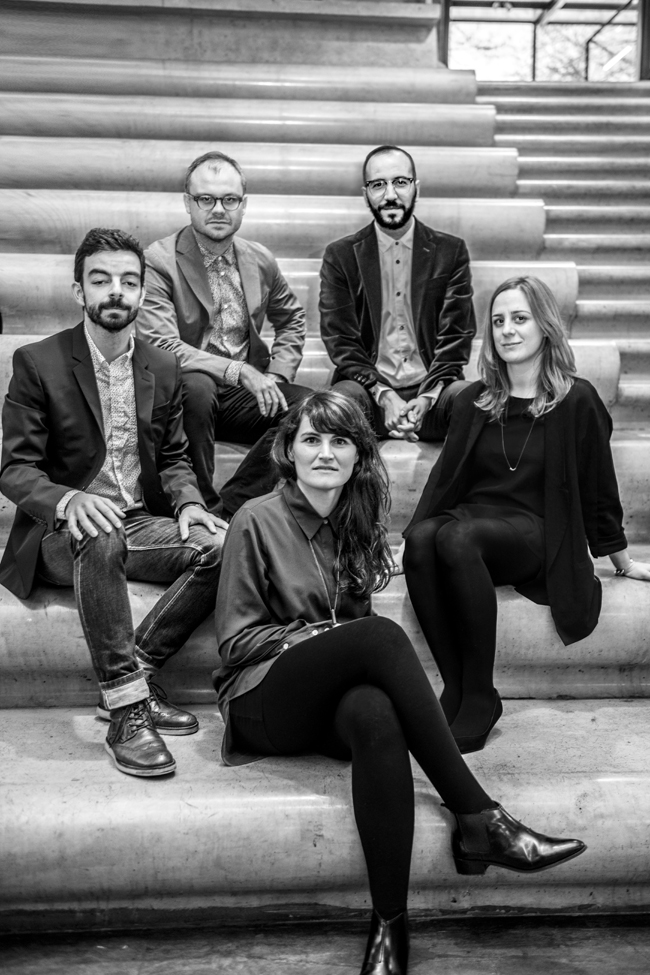 The curators began work on the triennale programming in September 2014. 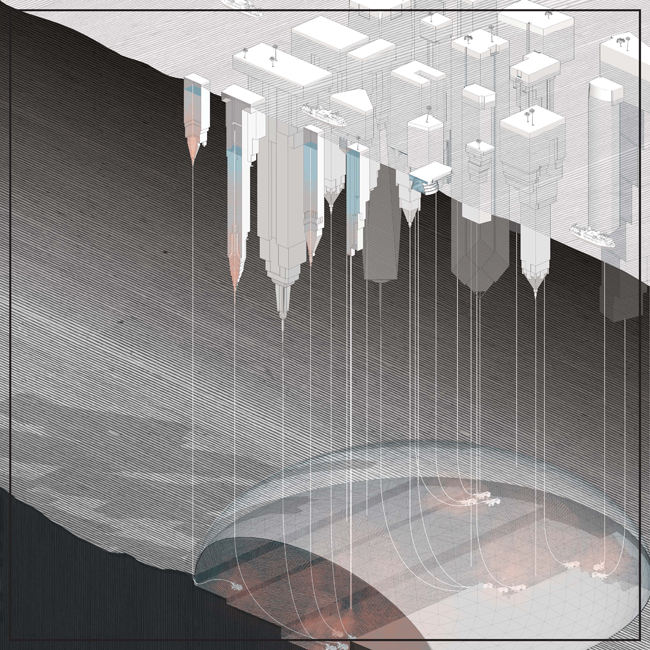 From Pacific Aquarium, part of On Residence. 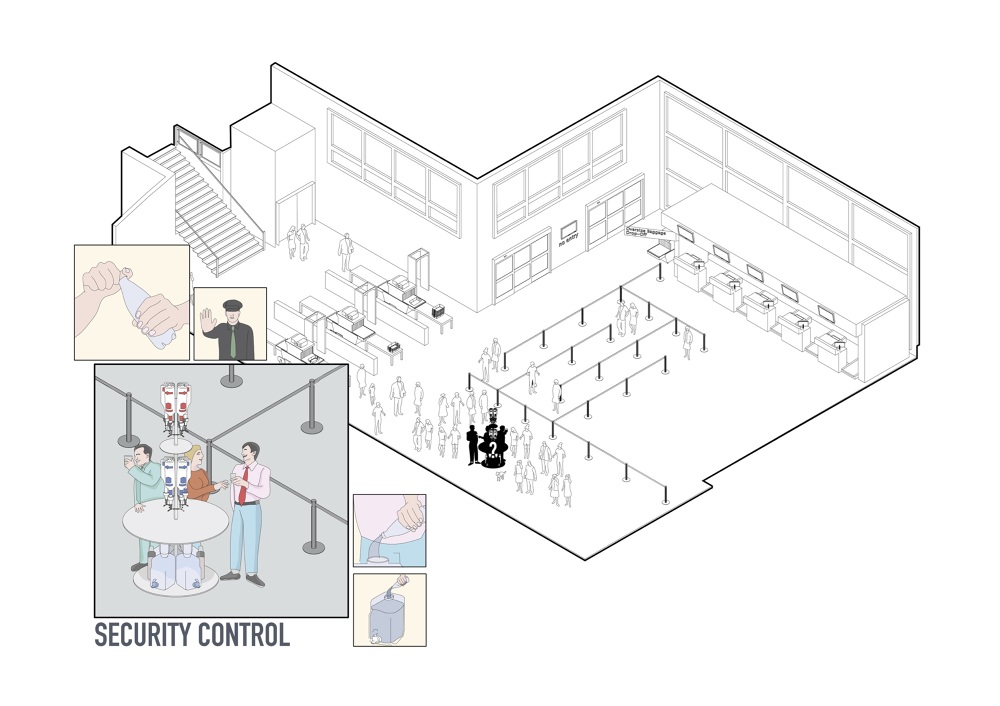 Managing Dissidence in Gardermoen, part of the In Residence portion of the Triennale program, intervenes in the Gardermoen, Norway, international airport and attempts to disrupt the circulation of passengers. A prototype will be installed inside the airport for the duration of the triennale. 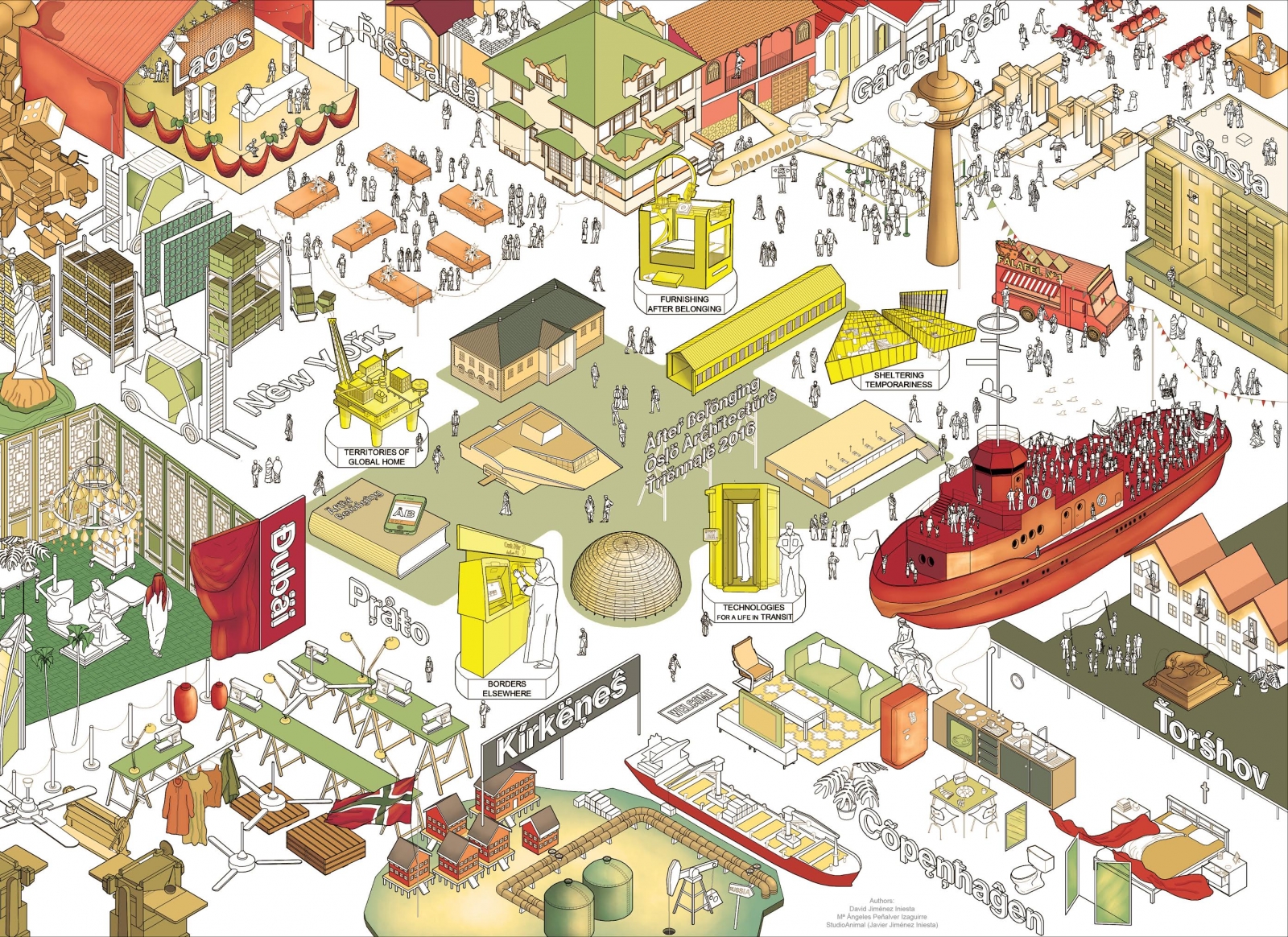