The first International Forum of Architecture and Urbanism at the RioAcademy brought together top architects and urbanists.

Architect Alejandro Aravena presenting at the first International Forum of Architecture and Urbanism at the RioAcademy.

Brazil is going through tough times. The country’s economy is beginning to slow down after many years of growth, with its currency, the Real, recently reaching its lowest devaluation since 2003. Petrobras, the state-owned oil conglomerate that is the source of much pride, is embroiled in a high-level corruption scandal unlike any before it (and this in a country used to corruption scandals). Income inequality is exacerbated and efficient social programs have receded. Look at Rio de Janeiro, and all these forces are thrown in sharp relief.

Rather than focusing on the challenges of the moment, architects Nuno Ribeiro and Guilherme de Sá, with curator Júlio Evo Magro, decided to take inspiration from the great creative energy and momentum currently sweeping Rio as it readies for the 2016 Olympic Games. The trio are the brains behind the RioAcademy‘s first International Forum of Architecture and Urbanism, which sought to bring to the changing metropolis a critical and essential dialogue about the future of urbanism.

Held in late July at Rio’s iconic Museu de Arte Moderna, the event homed in on questions of urban growth in emerging countries and markets. The forum was split into two parts, consisting of speaker presentations and urban design workshops (the latter yielded urban proposals that could potentially be put into practice.) For a first-time event in a city with no tradition of such initiatives, Ribeiro, de Sá, and Evo Magro managed to recruit an impressive roster of speakers and participants. Pritzker laureates Paulo Mendes da Rocha and Christian de Portzamparc, internationally known architect-urbanist Jaime Lerner, and the next Venice Architecture Biennale director Alejandro Aravena all participated, sharing top billing alongside Kai Uwe-Bergmann from BIG-Bjarke Ingels Group, Reinier de Graaf of OMA/AMO, Colombian architect Giancarlo Mazzanti, and urban designer Jorge Mário Jaurégui.

Mendes da Rocha opened the talks with a very insightful address that managed to speak directly to the core of architectural practice without indulging in architecture-speak. He elegantly made the case for the profession’s need to pursue a broader, more responsible mandate, which has a higher estimation of the planet and its resources. “The first and primordial architecture is geography,” Mendes da Rocha said, illustrating the fundamental connection of the manmade to the natural.

His talk then turned to the idea of reevaluating what it means today to be an American architect—not a North or Central or South American architect, but an architect of the Americas. The 86-year-old reminded the audience that, in every project, designers make a statement of their knowledge in a diverse range of areas and contexts, from the technical to the social and the political. In a digital era, where time is always slipping away and everyone is busy, when we are all at the mercy of increasingly shorter attention spans, Mendes da Rocha’s message affirmed the great relevance of design and the everyday decisions architects make. 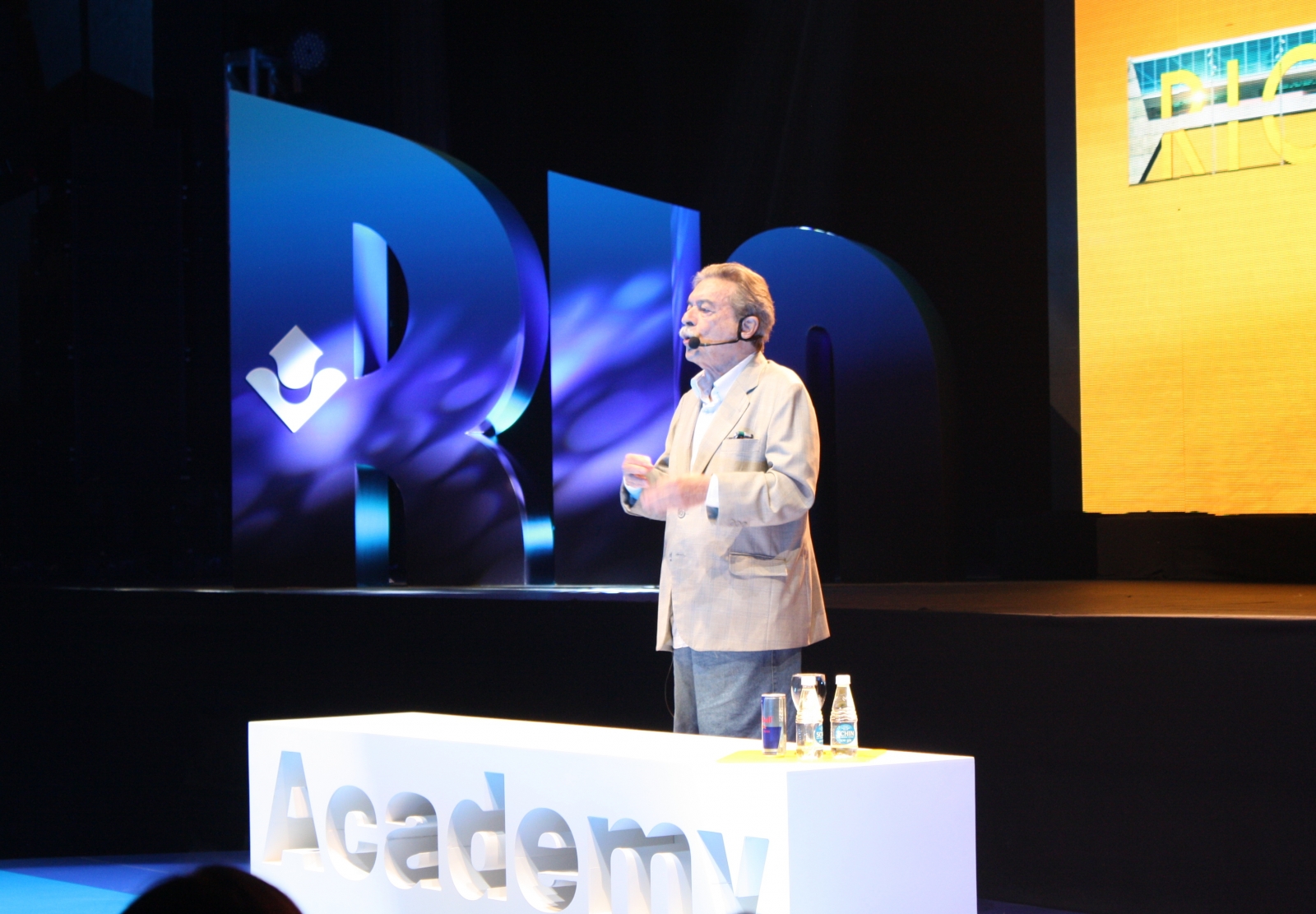 It could be said that Alejandro Aravena’s presentation was almost a case in point of Mendes da Rocha’s talk. Fresh off the news of his Venice appointment, the Chilean architect expanded on the motivations underlying his low-income housing projects. He showed how, beyond considerations of “good” design, he and his collaborators had to cultivate a special sensibility for working through the thorny, multivalent issues related to housing. After such an energetic and enthusiastic talk, it will be interesting to see what concepts and ideas Aravena will prioritize for his biennale.

The French-Brazilian firm Triptyque Architects, recipients of France’s NAJA prize for young architects and with work in the permanent collection of the Centre Pompidou, spoke of their approach to architecture, which combines a European education with their natural environment and sustainable sensibilities. Their new multimedia library currently under construction in Osny, France, is a good example of these themes. With an open and flexible floor plan and sheathed in glass walls, the building embraces its urban context while yet creating a sense of place inside. An elaborate and self-replenishing system of water pools and waterfalls will help cool off the structure in summer in a very poetic and sustainable way.

Closing the lecture part of the forum was French architect Christian de Portzamparc, who followed an engaging talk by his wife and fellow architect Elizabeth de Portzamparc. With a highbrow yet accessible observations on the connection of philosophy and urbanism, he spoke of the evolution of his own urban thinking and explained his open-block concept for his Cidade das Artes complex (City of the Arts) in Rio’s Barra da Tijuca area, where the Olympic Park is being built. The building, Portzamparc said, was commissioned with grand urban ambition by an administration eager to give a certain civic and cultural sense to the overly developed and heavily trafficked neighborhood, one that lacked the human-scale urbanity of the rest of the city.

The panel talks that preceded the workshops focused on challenges to the future of ever-expanding cities, including aspects of housing and transportation. Overall there was an optimistic, albeit, careful, attitude. “A city is a concentration of opportunities, which is a good thing, but these opportunities also imply urban congestion,” Aravena said. “Work, education, leisure—people come to the cities because there is vitality there. That too many people want to partake of this vitality makes for the congestion. So the issue is how to manage that.” He admonished the knottier side of these urbanistic problems: “This is a discussion of ideas and concepts, of visions of the world around us, but also of transparency of the lobbying groups behind interventions and investment decisions.” Jaime Lerner, who, starting with his hometown of Curitiba, has helped remedy transportation systems all over the world, highlighted the importance of conflict management when thinking about cities. “The process of urban planning is like democracy and democracy is not about unanimity—it’s the balancing of opposing views,” Lerner said. But as an unattainable as that sounds, he categorically affirmed that “every city has a solution.”

The workshops, which were open to all, saw a turn-out that included both professional architects and students. The topics addressed ranged from architectural heritage and urban mobility to spontaneous urbanism and social inequality. A selection of the top entries will be donated to Rio de Janeiro urban planning commission. 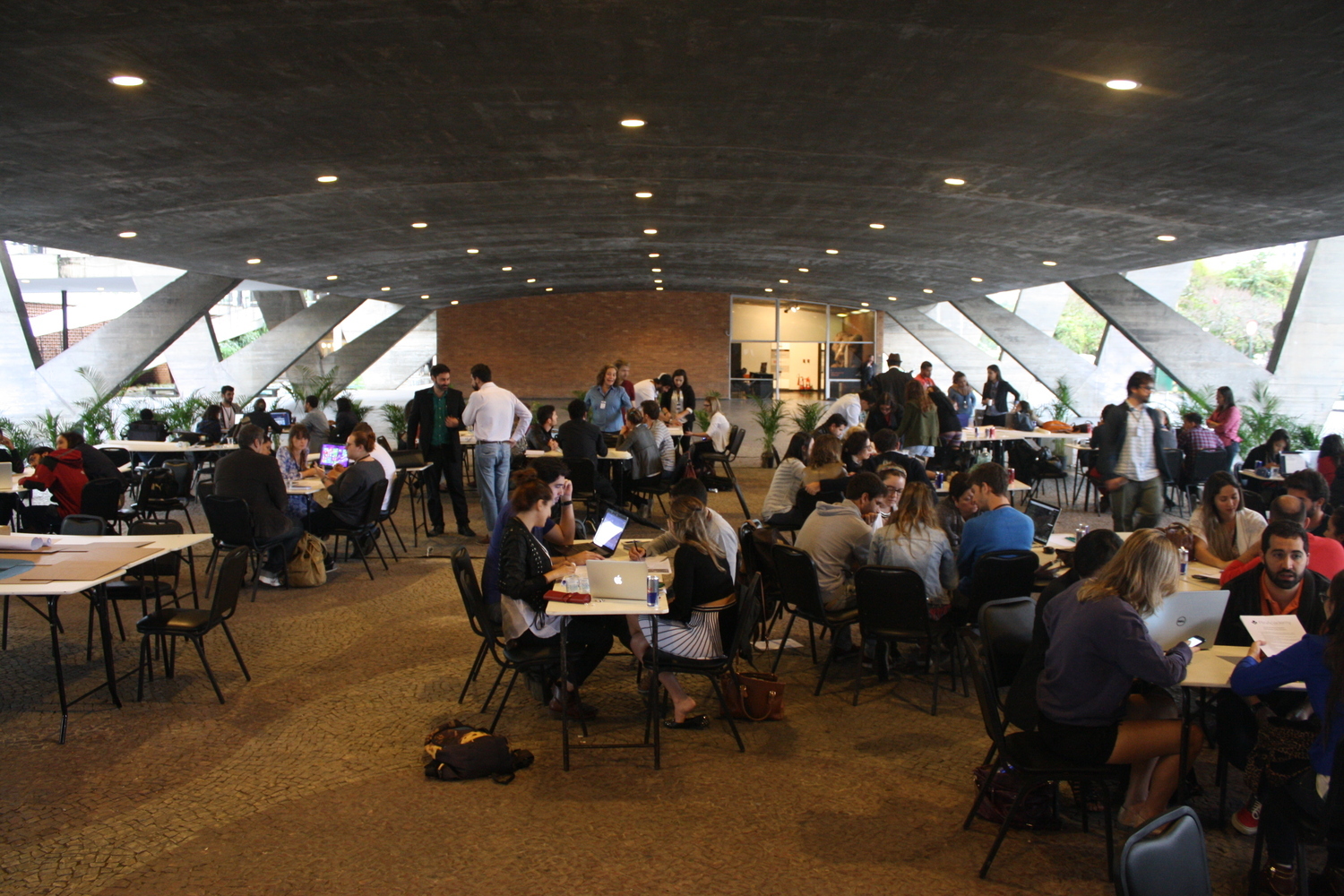 The scene at the forum’s urban design workshops 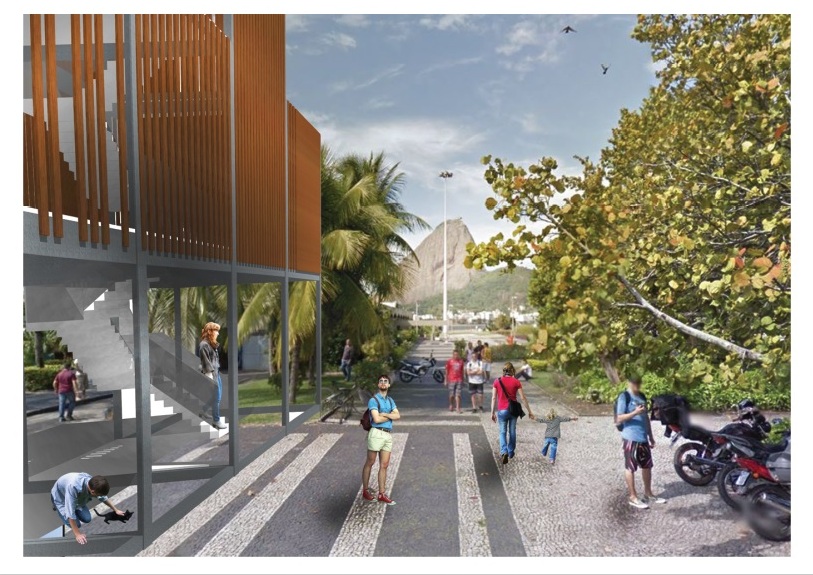