Recognizing and awarding projects that show a clear passion for community and public/private partnerships.

Remington resident Kenny Rogers discusses the impact of Miller’s Court on his life and the community.

In September, Simeon Bruner, founder of the Rudy Bruner Award for Urban Excellence, and I kicked off celebrations for the five 2015 winners with ceremonies in Baltimore, Grand Rapids, and Olympia. Each reflected the unique character and culture of its home city and project, yet all reminded us of the passion for community and public/private partnerships that make these projects possible.

Our first stop, on September 18, was Baltimore, a historic, post-industrial city in the midst of a renaissance, to recognize RBA Gold Medalist Miller’s Court, an affordable and supportive living and working environment for school teachers and education-focused nonprofits. Seawall Development Company, the project’s developer, thanked the many partners that made the project possible including Mayor Stephanie Rawlings-Blake and the City Council of Baltimore, the Maryland Department of Housing and Community Development, Enterprise Community Investment Inc. and the community of Remington. A personal perspective on the impact of the project was provided by local resident Kenny Rogers. Holding his newborn child, he spoke of his experience coming to Baltimore as a young teacher to live in Miller’s Court, and how living there convinced him to stay in the city and purchase a home in Remington. The celebration continued into the warm summer-like evening, attracting residents from the neighborhood and across the city with a street party that included music and local vendor food trucks. A few blocks away, construction is already underway at Remington Row, a new mixed-use development that will bring apartments, retail space, and a new community health center to the neighborhood. The $50,000 cash award will support street activation projects (artwork, landscaping, lighting, and signage), incentives to attract local food producers and nonprofit tenants, and educational programs at Remington Row. 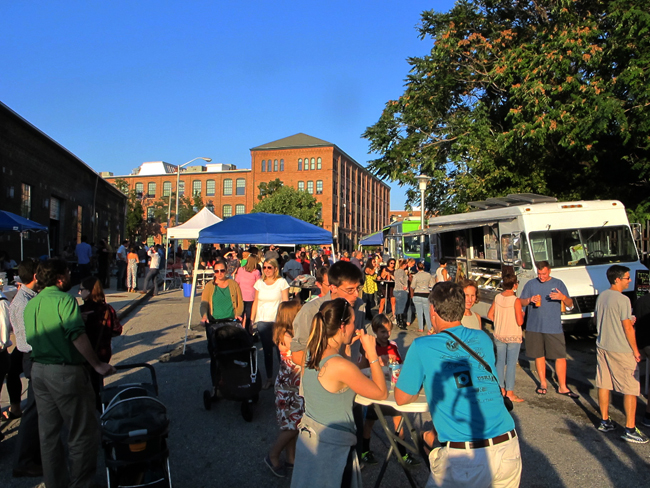 Next, we headed to western Michigan, landing in Grand Rapids, the state’s second largest city, located at the heart of a growing, eleven-county agricultural region. The city was in the midst of ArtPrize®, the annual international art competition. Downtown hummed with activity as people walked the streets checking out art installed throughout a three square mile area in outdoor public spaces and inside local businesses. RBA Silver Medalist Grand Rapids Downtown Market, a new public space promoting local food producers, entrepreneurship, and education about nutrition and healthy lifestyles, was host to eight art pieces. The buzz extended to Slows Bar-B-Q, the newest addition to the Market, where customers gathered over drinks and dinner in the lively first floor restaurant and shoppers ran last minute errands in the adjacent market hall. The next morning, October 1, Simeon presented the award plaque and certificates that recognized the DeVos Family Foundation, Frey Foundation, Grand Rapids Community Foundation, Wege Foundation, and Downtown Development Authority for their contributions to the project in the light-filled, rooftop greenhouse. The $10,000 cash award will support community programming offered through the market’s educational foundation. 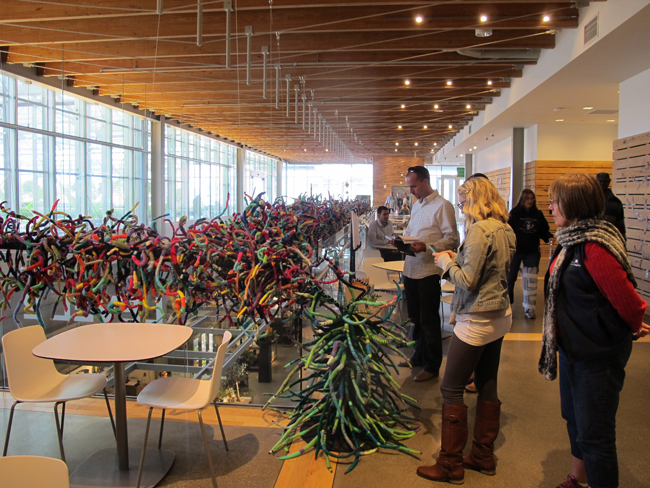 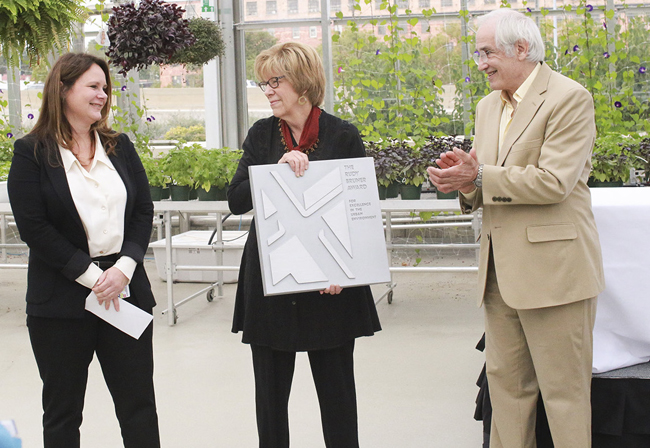 A few days later, Simeon and I headed to the west coast to Olympia, Washington’s capital and a former logging and ship building port at the base of Puget Sound. On a beautiful Sunday afternoon, we joined residents and supporters of Silver Medalist Quixote Village, a community of 30 tiny houses that provides permanent, supportive housing for homeless adults, as they gathered on the back porch of the community building to celebrate their award. The ceremony was marked by warmth and emotion as residents, board members of Panza, the project’s sponsor, and community partners shared their stories of the impact of the project on their lives. As Board of Directors President Tim Ransom accepted the award plaque on behalf of the project’s many partners, he shared their hopes “that Quixote Village will serve as a model for other communities facing the growing crisis of poverty and homelessness well into the future.” Afterwards, guests lingered to enjoy the late afternoon sun, admire the flowers and produce grown in the gardens, and visit with residents, several of whom opened their homes for tours. The $10,000 cash award supports building and site enhancements. 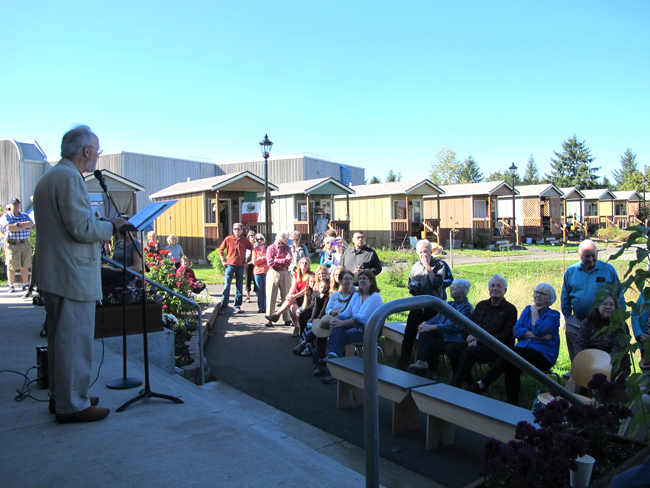 Quixote Village residents, board members, and community partners gathered in the courtyard behind the community building for the award presentation. 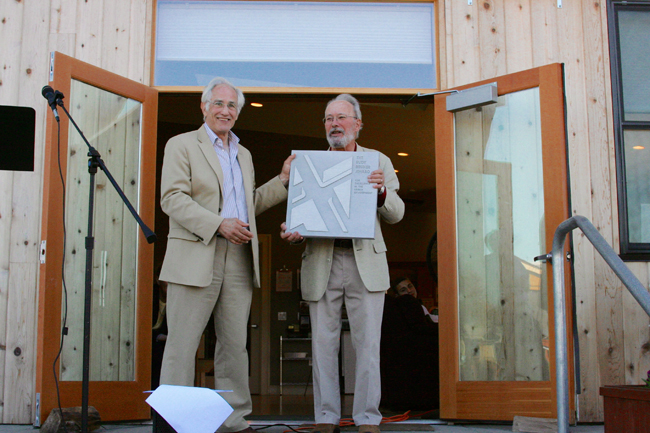 Panza Board of Directors President Tim Ransom accepts the award plaque from Simeon Bruner on behalf of Quixote Village.

Next, we headed to Cleveland and Greenville for award presentations and panel discussions organized by the sponsors of Uptown District and Falls Park on the Reedy. Stay tuned for reports on those events and the dialogue that took place there in our next post.