A new project by the Canadian design firm molo, called softshelter, considers the frightening reality of homelessness after a natural disaster, a topic which is unfortunately never too far from recent events. Only a few months ago, tornados leveled homes in Tuscaloosa, Alabama and the Mississippi River swelled to its highest water levels since 1937, […]

A new project by the Canadian design firm molo, called softshelter, considers the frightening reality of homelessness after a natural disaster, a topic which is unfortunately never too far from recent events. Only a few months ago, tornados leveled homes in Tuscaloosa, Alabama and the Mississippi River swelled to its highest water levels since 1937, flooding neighborhoods in Illinois, Missouri, Kentucky, Tennessee, Arkansas, Mississippi and Louisiana.

How do public organizations respond to these unanticipated needs for mass shelter? How do families continue the routines of daily life without their homes? 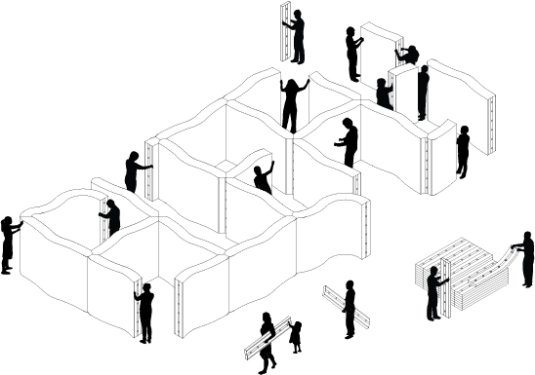 Molo’s softshelter is a system of uniform, lightweight kraft paper walls that can be unpacked, expanded and magnetically joined end-to-end to create temporary living spaces within minutes. The softwalls fold and expand like an accordion, making them easy and efficient to pack, ship, and set up without tools or prior training.  Rooms can be made large or small, depending on family size and can be connected to neighboring walls to create communal spaces.

To replace someone’s everyday surroundings, even temporarily, is not just an issue of physical shelter. Softshelter also considers the emotional impact of unexpected homelessness. The system creates privacy within a larger indoor setting and provides the sentimental, comforting side of a family home. Accessories that may be hung on the softwalls include storage pockets for personal items, hooks to hang family photos, an LED lamp, and a flower vase. If the larger building housing the softshelter system has lost power, a simple 12V electricity system can be connected through the softwalls, bringing as much normalcy as possible to those displaced. 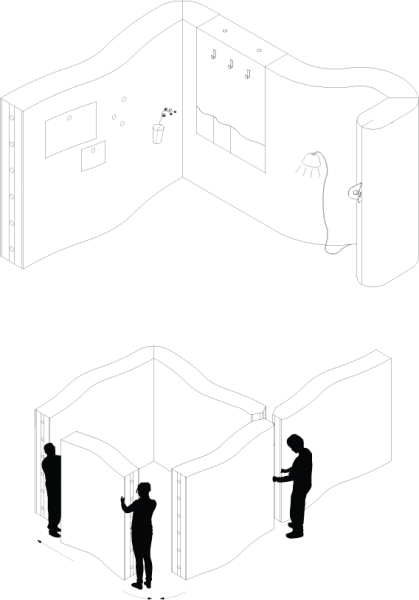 The designers behind softshelter, Stephanie Forsythe and Todd MacAllen, first developed the idea of expandable temporary shelters with Soft House, an accordion-like structure that was a semifinalist in Metropolis magazine’s Next Generation Design Competition in 2004.

They also showed a similar wall prototype at the Dwell on Design exhibition in June.  Partnering with Architecture for Humanity the designers created an accordion-folded freestanding “wishing wall.” Visitors to the Los Angeles conference were then invited to write their personal wishes on white slips of paper and tuck them into tiny slits cut into the folds of the wall.  The project was inspired by the fundraising initiatives of Paper Cranes for Japan and DoSomething.org. Over the course of the conference, participants shared their wishes and opened their wallets, donating a generous amount to rebuilding efforts for post-tsunami Japan. 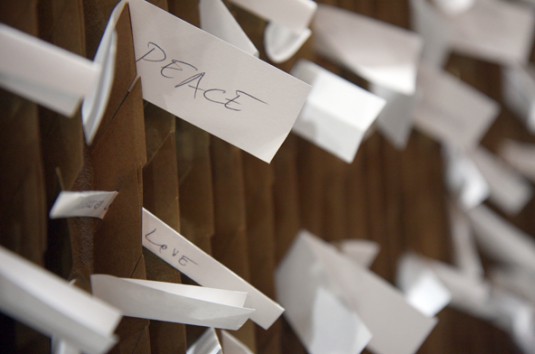 Adapting the softwall for Architecture for Humanity.

The softshelter is a practical product in many ways–the paper kraft construction is designed to be long-lasting and recyclable.  The most appealing part of the project, however, is the sensitivity with which molo has considered the plight of individuals in need of comfort, familiarity, and hope.

Check out the softshelter journal in the upcoming weeks to watch as a molo team member sets up residence in a softshelter prototype.  The molo team writes, “By occupying the shelter as it is being designed, we will be able to make discoveries that allow us to further refine a system that, hopefully, will one day be able to assist in disaster relief in an immediate and tangible way.”