Back in the Spotlight: Alexander Girard Makes a Splash at New York Design Week

A temporary exhibit celebrates the reissuing of several rare pieces by the architect-designer.

The new Alexander Girard pop-up exhibit in New York’s Meatpacking District is a three-part celebration of all things Girard. The showcase highlights the architect and designer’s fabric work, developed during his time as design director of the textiles department at Herman Miller from 1952 to 1973. Then there are the lounge pieces Girard produced for Branniff Airlines in the late 60s, a small number of the 17,000+ items he designed for the project. The third element is the striking exhibit installation, a Girard-esque living room, bursting with color and populated with period affects.

But Alexander Girard: An Uncommon Vision is more than a retrospective. The show fetes the reissuing of several Girard designs, by Herman Miller and Maharam, for the first time. These include overlooked furnishings like the svelte Hexagonal Table, the marble-topped Splayed Leg Table, and the playful Color Wheel Ottoman, which were discontinued shortly after their initial release. 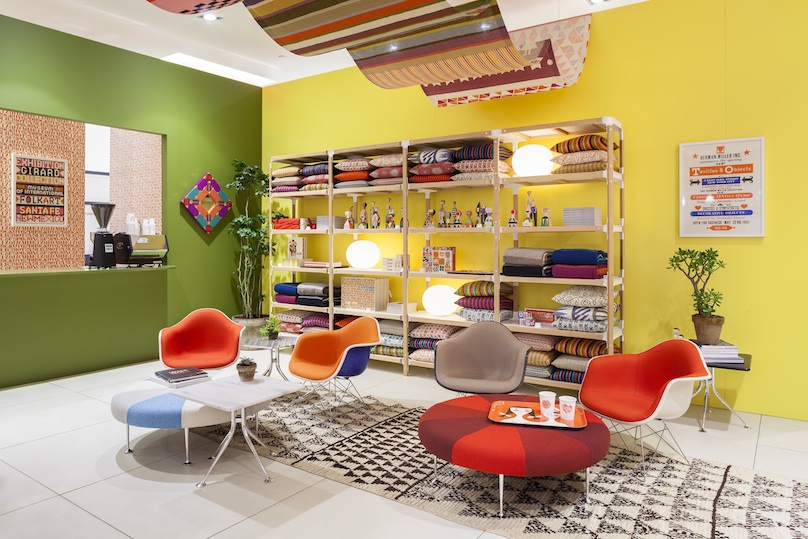 The Color Wheel ottoman and the Hexagonal table on display

Sam Grawe, editorial director of Herman Miller, gives us some historical perspective on the rarity of these pieces. “The furniture that Girard designed for Braniff Airlines was manufactured by Herman Miller on a contract basis. It became the origin of the Girard Group in 1967. This is the first time any of these pieces have been reproduced, so they’ve become rare collectibles because they were produced only for that one year, 1967,” says Grawe.

The showcase also illustrates how Girard influenced late midcentury interiors of corporate America, by introducing domestic and decorative touches in otherwise sterile office environments. “In 1970, when Herman Miller produced Action Office—a series of decorative panels for office spaces—it fundamentally transformed from being a company that manufactured domestic furnishing and focused on the production of contract furnishing for the workplaces.” At the time, Girard had developed 40 decorative silkscreen designs to add an element of “aesthetic functionalism” to corporate spaces. These panels, 12 of which are being made available once again, are a mix of abstract patterns and signature Girard iconography.

The most exciting part of the exhibit, however, is the space of the installation itself. Beyond the brightly-pigmented textiles and furniture, the showcase is fleshed out with vintage and new books about, or by, artists, photographers, and designers Girard associated with in his lifetime. Georgia O’Keefe, Saul Steinberg, Isamu Noguchi, George Nelson, and the Eameses all feature among the living room’s eclectic curios. And since Girard was known to be a coffee aficionado, visitors will be served coffee from SoHo’s La Colombe. 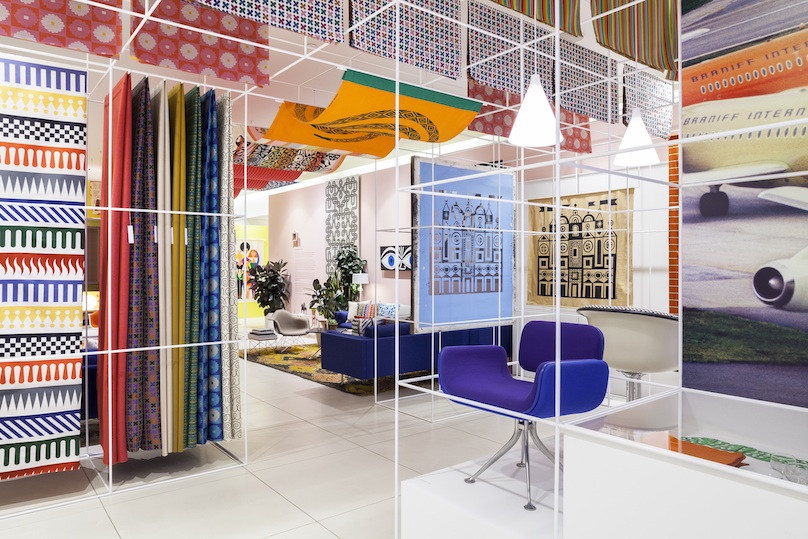 Walking through the 2,000-square-foot showcase, traces of world cultures soon become evident. Girard did not wish to break all ties with the past, but was able to pull together disparate elements—popular culture, non art, folk motifs—and re-synthesize them with harmony and humor. “In the ideology of his work, Girard was about taking the entirety of history but in execution, he was one of those designers who followed nobody’s rules. And because of his skill level, his eye, things looked amazing. Girard could combine 18 fonts on one poster and it looked incredible. He could hand draw entire alphabet in mixed case letters and somehow it all fit together,” says Grawe. 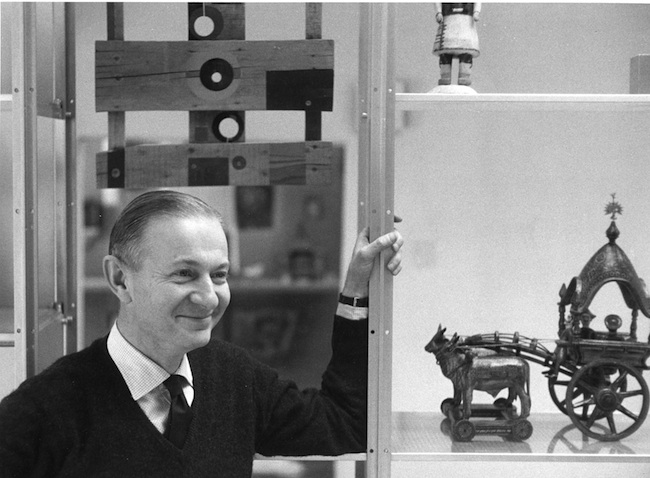 Alexander Girard in his studio, 1972 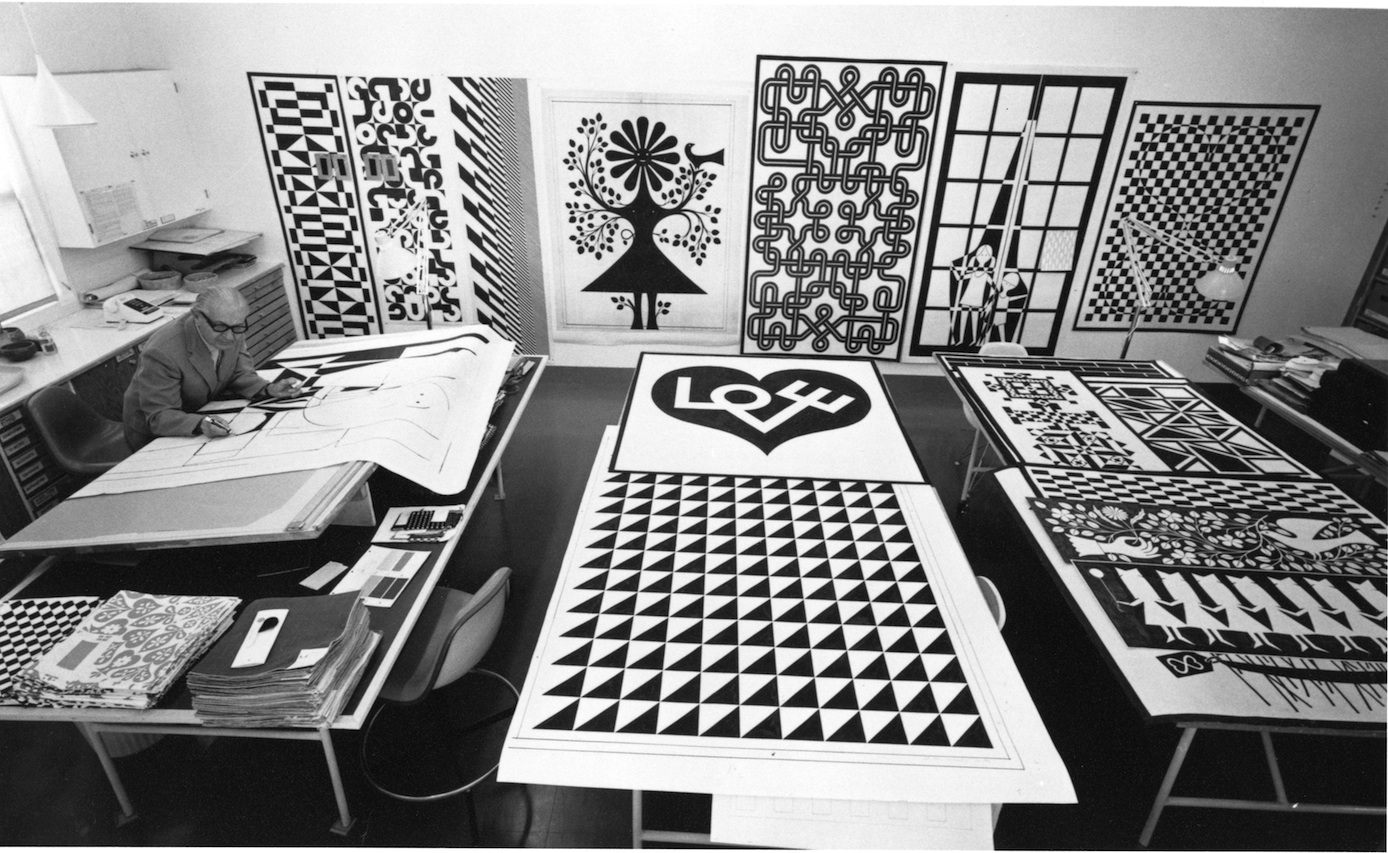 That agile design sense may be part of why the work still resonates with us today. “Girard was living in a networked world. His father was an antiquarian and he was always travelling and pulling these things back to Sante Fe,” Grawe explains. “Today we live at a time when everyone has a much more voracious input. We collect and curate visually all the time. But that didn’t exist for most people then. In a way, there’s an irony that surfaces in the title of the showcase. Girard’s uncommon vision was to see the commonality.”