Teenage Engineering’s New Synthesizer Is in a Class of One

When it comes to synthesizers, the OP-1 is in a class of one. 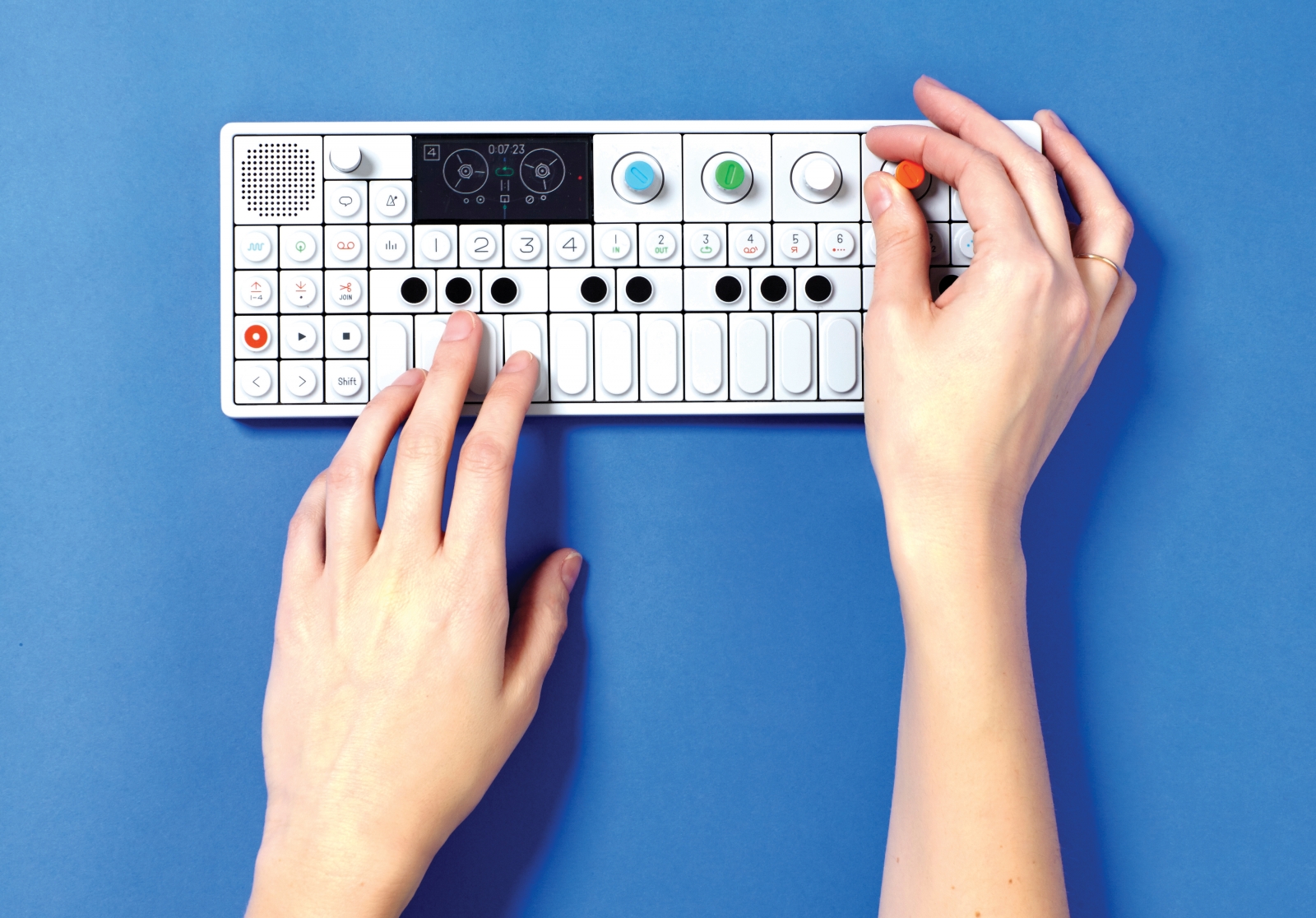 The OP-1 synthesizer by Swedish outfit Teenage Engineering reimagines what a synth can be. With eight built-in synthesizer engines, a four-track “tape deck,” and numerous effects, it bundles the tech of a much larger synthesizer in a smart, portable package.

Synthesizer pioneer Robert Moog once told me about the reception of his first-ever modular synthesizer—a cross between a kitchen dresser and an analog telephone exchange. The year was 1964. He had set up his invention in his upstate New York basement workshop. People would walk by, “they’d listen, they’d shake their heads. What is that weird shit coming out of the basement?”

Moog’s point was that, while no one knew what electronic music or synthesizers were back then, by the beginning of this century, we had become saturated with electronic sound. In a sense, the synthesizer’s, or synth’s, incredible success and evolution parallels those of the personal computer: faster, smaller, cheaper, and easier to use. More recently, its fate—like that of much consumer hardware—has been cast into doubt by the rise of software development. If a piece of software can make all the sounds of any synth, who needs one at all?

Teenage Engineering’s OP-1 synthesizer answers the question by being more than just a sound-making machine. The size and heft of a large slab of chocolate, the OP-1 is a beautifully engineered soundboard in a sleek, brushed aluminum case with a small color display screen. The cunning layout of knobs, keys, and buttons invites playing, and promises near endless opportunities for exploration.

Perhaps the most intriguing features of the design are the number of synthesizer engines the OP-1 offers. The synthesizer is often mistakenly thought of as an instrument for producing any sound imaginable; in reality, each synthesizer engine paradoxically produces a distinctive generic sound. The namesake engineers of the Sweden-based Teenage Engineering certainly know their history, a fact illustrated by the allusive nature of the eight digital engines integrated in the OP-1 as presets. These range from Frequency Modulation (FM)—the core of Yamaha’s 1983 bestselling synth, the DX7—and Phase, to Pulse Wave, and String modeling, among other classic engines. 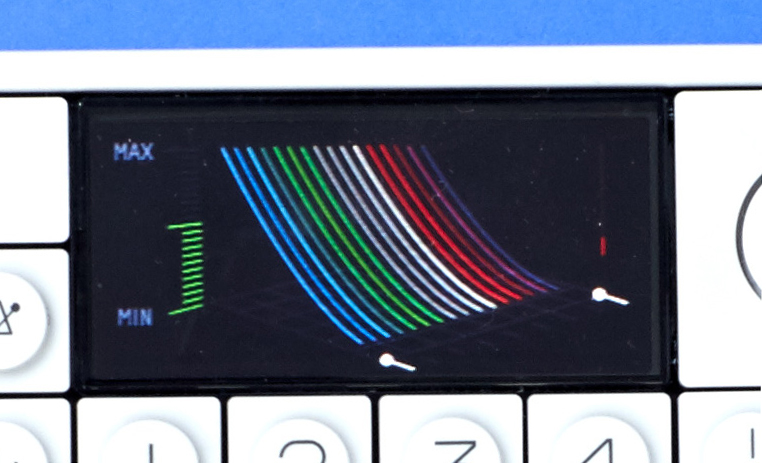 Among the synthesizer’s most striking features is the graphic interface that pairs a different character or geometric motif for each sequencer mode. Above: the OP-1’s String Synthesizer engine

The OP-1 also packs a four-track tape-recorder, as well as more typical modules —a drum machine, a sampler, a mixer, and sequencers—that are now de rigueur for any beat-making DJ. It has some nifty new gadgets for modulating sound, like the G-Force accelerometer that is activated by shaking the instrument. In one sequencer mode, a crank add-on turns the synth into an old-fashioned music box. There’s even a built-in FM radio that can be used for sampling or modulation. The radio, in particular, is an inspired touch and a nod to John Cage, who first used it for electronic music composition.

These features notwithstanding, a great synth still has to make great sounds easily. Scrolling through vast menus of parameters is, to a musician, akin to filling in your tax-return forms. Not so with the OP-1, which does away with the scrolling altogether. The soundboard is eminently easy to operate—just select either synth or drums, and press one of the eight preset buttons to start playing the keyboard. The display and the four colored knobs (mysteriously called encoders) are the key to refining your preset sound. As you twist the knobs, the sound shifts and the color-coded visual display changes to match it. When you get a sound you like, you can store it by pushing the preset button. 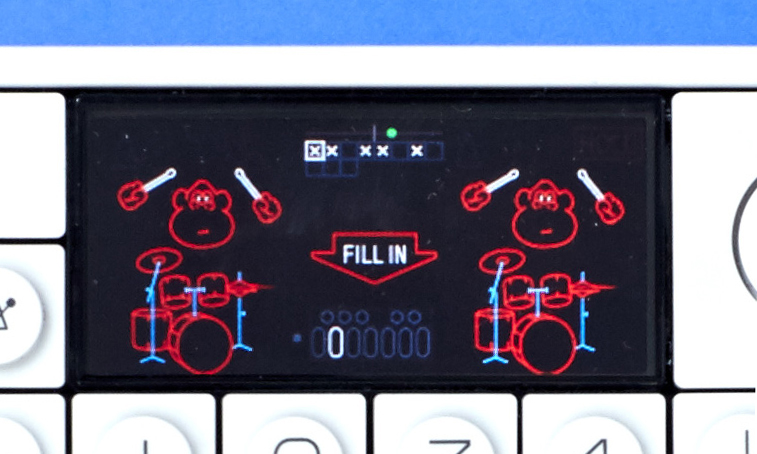 The Finger Sequencer in “drum mode” conjures twin gorillas whose movements are synced to taps of the keyboard.

The graphics, which recall the 8-bit character designs of early Nintendo, animate the bleeps and bloops. The content of the graphics—a pair of drum-playing gorillas can’t help but resemble Donkey Kong—change with each mode. The default image for the Sketch Sequencer reproduces a likeness of Karl Marx, accompanied by the slogan “Marx Was Right”—dead labor digitally ironicized by Swedish engineers. In this mode, waves of sound are visualized on the screen as lines that can be pulled this way and that to produce aural inflections.

Again, this hearkens back to the history of electronic music and its pioneers, such as English composer Daphne Oram, who devised a way of making electronic music by painting on optical film. The results are sonically surprising, especially when the sequencer speed is increased. In a particularly smart move, the four-track is represented by spinning tape spools to simulate their analog rewinding. (You can even get that great sound of tape starting up or slowing down through the head—the tape recorder’s answer to the vinyl scratch.) 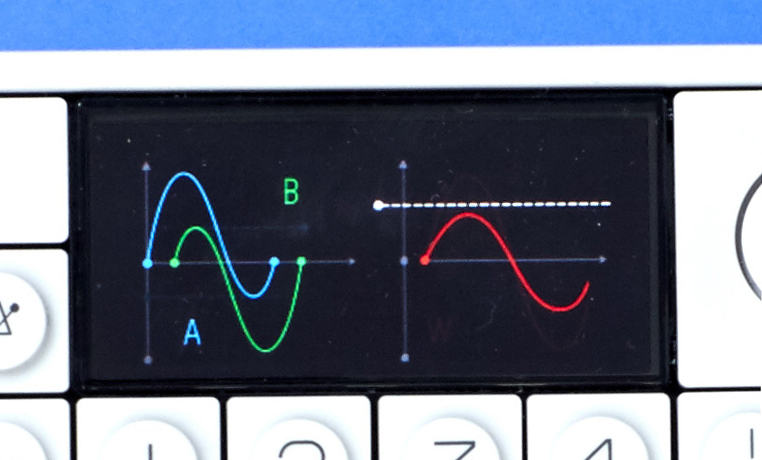 The Phase Synthesizer engine monitors the levels of distortion and how they change in real time.

The OP-1 arrived at an ominous moment. I was about to rehearse some new music with my bandmate, who plays only digital synthesizers. I demonstrated the new synth the quickest way I—the analog guy—knew how, mostly by manically pushing buttons and twisting knobs. Soon, I had a fairly impressive sequenced-sound going, which had flashes of early David Borden (look him up). The next minute, I had worked out a robot sequence that was convincingly Kraftwerk.

First and foremost, the OP-1 succeeds as an instrument for live performance. You can play back a prerecorded track and layer over tape loops, custom sounds, and presets, as well as sequence patterns, or add drums. This is a synth to mess with and explore in a live setting. I found that I could induce all sorts of digital fits and glitches to make totally strange, but stimulating sounds. The digital stammers and squelches were unusual in volume, timbre, and pitch because I could slow them down, speed them up, and reverse them through the tape heads. Used on stage, audiences can see all of this as you shake, bend, and crank the synth—a Jagger-esque performance that puts to shame the knob-twiddling laptop-DJ act.

This is what separates a real instrument from software. The OP-1 can produce out-of-this-world sounds, but still keeps the control human. Its effects may be digital, but they yearn to be manipulated in the moment. It won’t replace my Minimoog, but it surely is a lot more portable.

Trevor Pinch is the co-author of Analog Days: The History and Impact of the Moog Synthesizer. He plays in the Ithaca based electronic duo The Electric Golem.