An American icon, the Adirondack or ‘Westport,’ chair was born from what I believe all good design comes from: simplicity, necessity, and function. Years after its humble invention by a carpenter in rural New York it still epitomizes the celebration of the outdoors in the Northeastern states and is being reproduced by manufacturers everywhere, and […]

An American icon, the Adirondack or ‘Westport,’ chair was born from what I believe all good design comes from: simplicity, necessity, and function. Years after its humble invention by a carpenter in rural New York it still epitomizes the celebration of the outdoors in the Northeastern states and is being reproduced by manufacturers everywhere, and sold by many including L.L. Bean, Pottery Barn, and the like. Its influence can be found across the country now, but another timeless American icon will begin to rival its popularity as time passes.

We, in the Southeast, have our own iconic piece of furniture. It has similar origins as the Adirondack in that it, too, exists because of a need for functionality. I submit that the rope hammock will be the next great, every-man American furniture icon. It has the history, function, and beauty to achieve such a status but lacks only recognition. Much like the Adirondack, the first hammocks were made from the materials at hand. Native Americans in the West Indies would weave together natural fibers to create these swinging beds that would keep them off the hard ground and away from many bothersome crawling creatures. 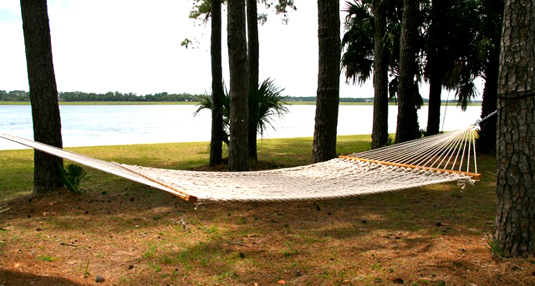 Christopher Columbus marveled in this simple yet useful technology and brought several hammocks back to the Old World. There, they became saviors for sailors who would roll out of their berths with the rocking and rolling of their ships. Because the hammocks would swing in tandem with the movement of the frigate, seamen could finally sleep without fear of being expelled suddenly from their cots.

The nautical application of the hammock is what led to the current, iconic hammock. The iconic hammock, to me, will always be the one I imagine hanging between two palm trees. It is a lattice of white cords, binding the two trees together like a magnificent spider web. This version has been produced by Pawleys Island Hammocks since 1889. Many replicas exist, but Pawleys Island is the progenitors of the net-like form. The company says that a ferry captain invented the rope hammock after too many nights of having his canvas hammock stick to his skin with the humidity of the Lowcountry. His solution was to use something similar to a fishnet, but without all the uncomfortable knots and added slats to keep the ropes separated from each other for a more dignified entry and exit. 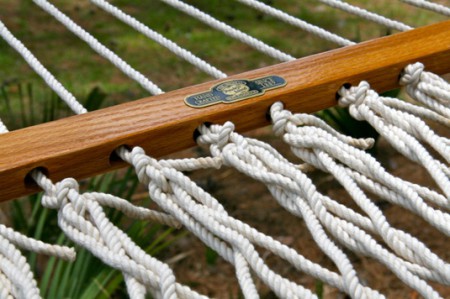 The result is the best-designed, most iconic hammock. It is recognized as an unequivocal symbol of summer relaxation and comfort. Here in the South we like to swing in them with a mint julep sweating nearby and the sunset shining on our faces. The one thing, though, that will always make my rope hammock superior to the Adirondack chair is that a hammock becomes exponentially cooler when you bring it indoors.

Rémy Thurston is a recent graduate of the University of Georgia’s Grady School of Journalism and Mass Communication earning a degree in magazine journalism. You can follow him on Twitter @remjb7.