Edyn, fuseproject’s latest, promises to improve your gardening and change the future of farming. All in a day’s work.

It seems like it would be easy: set up a plant with lots of light, make sure it’s not too hot or too cold, and water it regularly. Yet somehow, the plant still dies—what gives? This mild domestic frustration can stump even the greenest of thumbs. But, thankfully, there’s an app for that.

Developed by soil scientist Jason Aramburu and designed by Yves Behar’s fuseproject, Edyn is a Wi-fi-enabled app/sensor/water valve combo that is poised to revolutionize the way we garden and, more crucially, farm—especially considering how easy it is to use. Stick the sensor in the ground and it sends out a small electrical signal through the soil, which in turn collects a vast amount of data on everything ranging from humidity to light intensity. The information is then simplified and passed on to the gardener, who can access it via the Edyn app to start making informed planting decisions.

It’s this combination of organic and digital that Behar found so intriguing. “Having worked on sensors on the body (Jawbone UP), and sensors in the home (August), I got very excited about the possibility of working on sensors in nature,” the designer says. With Edyn, fuseproject appealed to the winning sculptural-yet-functional approach that made products like Jawbone so successful. “The form grows from the sensors embedded in the stem, and blossoms geometrically into the solar panel that faces the sun,” Behar explains. “Rather than making that transition too literal with flower-like forms, we chose a geometry that is abstract and more pure, and yet still speaks of the growing and reaching for the sun organically.”

The Edyn’s form, however, is as much about function as it is aesthetics. The hard yellow plastic top, which also stores a small solar panel and a microprocessor, looks easy to grip, and it attaches to most hose threads, sprinklers, and even some washing machine fittings.

But even more critical to Behar was that Edyn (originally called Soil IQ) could “solve a human problem, or even a humanity problem.” Because while Edyn will be a blessing to gardeners, it’s nothing compared to the good it could do for farmers across the globe. By making the planting and nurturing process less of a mystery, Edyn can help make the crop cycle a little more smooth and predictable. For Aramburu and Behar, it could even help usher in the end of mass food shortages. 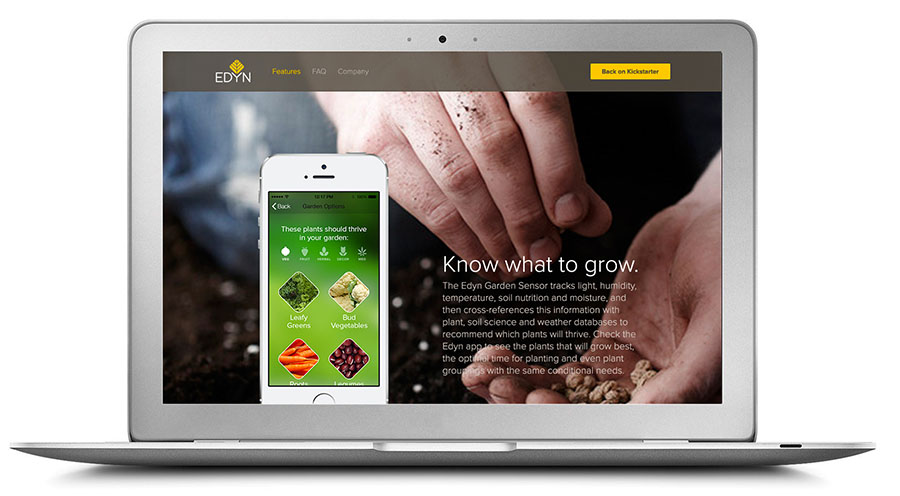 The potential was so great that Behar and co. took on the small Edyn startup as one of their “venture-design” projects. This meant that fuseproject invested much time and skills to build the company almost from the ground up. It’s not a viable strategy 100% of the time, but it certainly seems to have worked with Edyn. In this case, fuseproject’s contributions were comprehensive: name, app, website, color palette, logo—basically everything except the core idea and the sensor technology itself. It’s likely to make all the difference.

Because while the idea of a “smart garden” isn’t a new one, it’s the elegant design, not too mention the addition of the linked water valve (suggested by the designers), that makes Edyn stand out. The information gathered by the sensor can also be passed to the valve, which in turn helps the user make decisions about whether to water the plants, and if so, how much. “We really felt there needed to be something actionable for the users,” explained Behar. “Not just great information and advice, but a way users could remotely make decisions on their garden.”