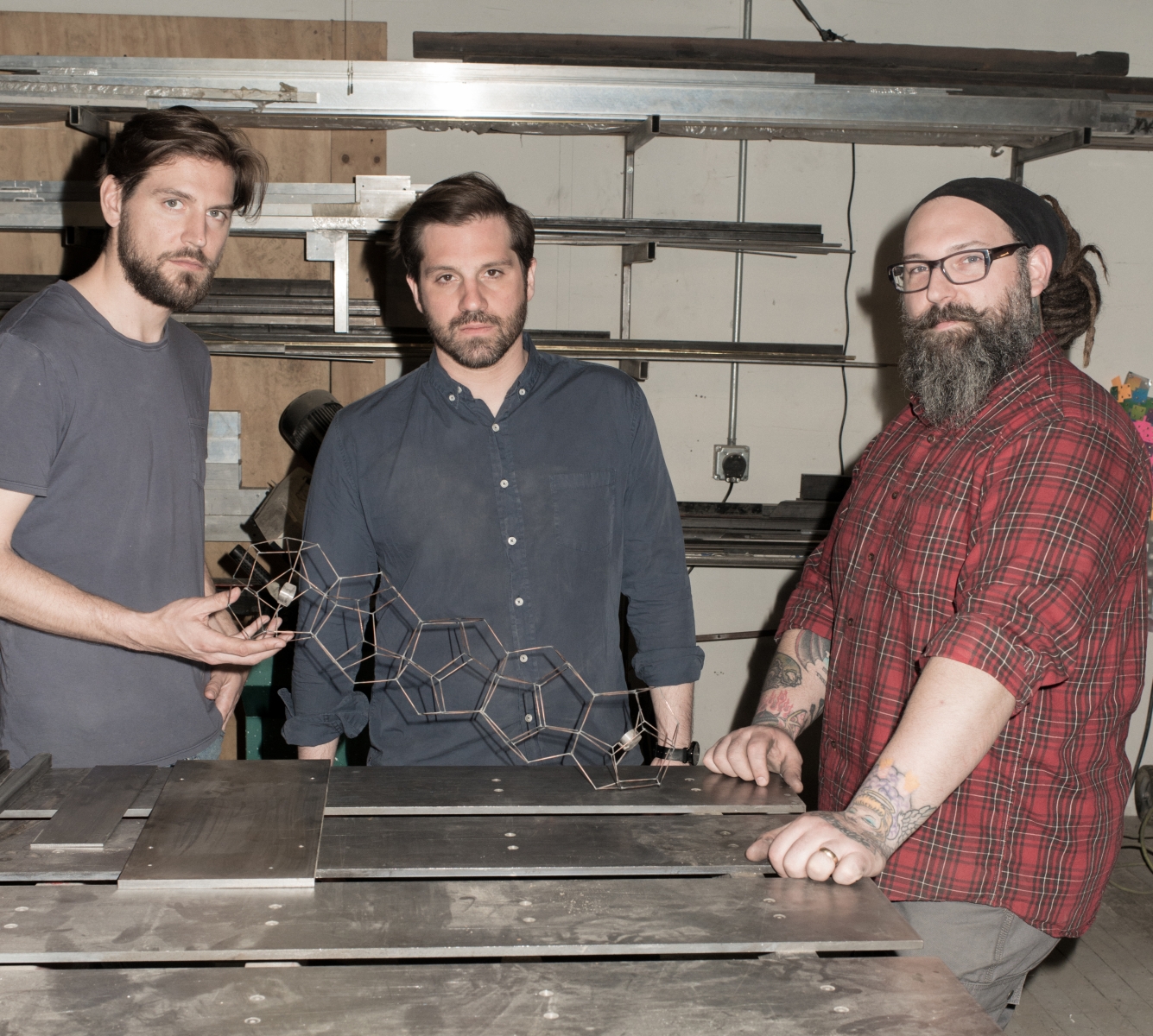 All photography courtesy the Principals

The project that first brought Drew Seskunas, Charles Constantine, and Christopher Williams together was a daring little sculpture. An eccentric geometric thing, it was made of faceted aluminum sheets, folded so as to create voids amid the creased planes; a later version, the BotoxLamp, concealed lights in these pockets that blinked and flickered when a person walked by.

It was 2011, and Seskunas was living and working as an architect in Berlin, while Constantine and Williams, an industrial designer and a master craftsman respectively, were employed at a metal shop in Bushwick, Brooklyn. Seskunas had designed the piece, but it required a kind of fabrication know-how that he had trouble finding in Germany. Constantine had been a friend since childhood and they had studied together at Pratt Institute, so Seskunas reached out to him for help. With Williams in tow, the three planned a charrette at the metal shop when Seskunas was next in New York. “It was an entirely self-motivated project,” Constantine remembers. “I think we did it in one evening.”

Later that year Seskunas left Berlin for good, and the trio founded the Principals, settling in Greenpoint in Brooklyn. Operating under that moniker, which evokes both elementary school hegemony and the Three Musketeers, they have produced a series of architectural installations, retail spaces, and products that are often aesthetically dissimilar but feel conceptually unified. All of their projects, be they the Dead Chair tables—which recast iconic chairs as foam table supports—or their memorable Liquid Body steel flask (sold at the MoMA Store and other retailers), are open to users’ interpretation. “People say the flask is a grown-up Capri Sun,” Constantine says. “It’s a form of success when design does that,” Seskunas chimes in. “We’re always mining our own personal histories.”

Everything is made or prototyped in-house at their Greenpoint base. The office, in a warehouse on the edge of the East River, resonates with the frenzy and creative energy that fuel overnight work sessions just like the one that produced the BotoxLamp prototype. (Late hours may soon become difficult; Constantine and Williams and their wives are expecting their first children.) “We’re physical thinkers, all three of us—that’s how we have our conversations, by physically making stuff and talking about it,” Seskunas says. Wood and metal cutters are parked up front by the entrance door, the floor around them littered with scraps of aluminum and plastic. Down the hall there’s a single computer station, while off to the side, dozens of models are stuffed onto shelves drilled into the brick wall. Spent material is everywhere, and “it can get very, very dusty,” Seskunas admits. 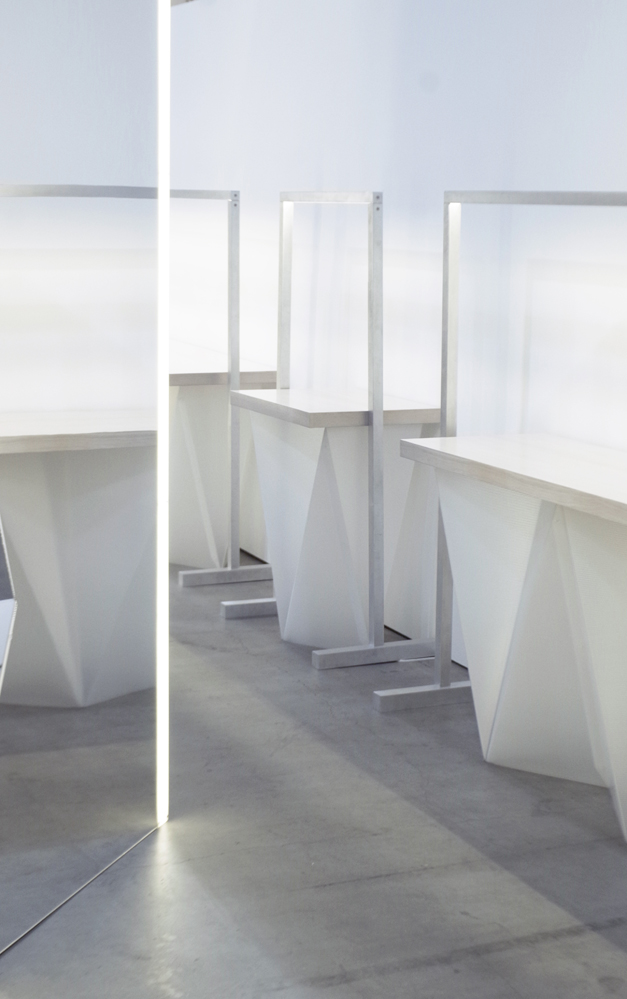 A pop-up designed for L.A. retailer Beautylish makes interesting use of faceted coroplast.

Full-scale mock-ups, such as those for a pop-up for L.A. retailer Beautylish and a recent art fixture at Manhattan hipster boutique Coming Soon, take up residence at the opposite end of the workspace, propped up by the meeting table. The former project is the third iteration of an experiment using faceted coroplast, or corrugated plastic sheets, which is highly structured yet supple. The suite of installations is the most architectural of the Principals’ work, though architectonic themes often find their way into the studio’s portfolio. Across the room, a fragment of a gossamer space frame, left over from a robotic wall installed in 2013 in the courtyard at MoMA PS1, leans against the wall. The two pieces represent complementary opposites and in that way are akin to the work of sculptor Isamu Noguchi, Williams suggests. “He was obsessed with river stones and did beautiful work with them, but he also made paper lanterns that were very geometric. There’s a big difference between the two, but there’s also a great similarity there.”

Who knows what Noguchi, earthy man that he was, would have made of Spooky Action, the bare-bones Coming Soon exhibit that closed at the end of January? The installation consisted of light refracted through pivoting resin prisms powered by stepper motors, evoking the outré composer John Cage’s notion of the degree zero—only applied to space. “It’s the idea of the event of the work itself,” Seskunas explains. “The viewer is there interpreting it, and they’re participating equally as much as we are in making the thing.”

Light and shadow are among several ephemeral “materials” that the Principals have experimented with (mist and sound being others), but as their work matures, the designers are ready to tackle more permanent agendas, Constantine says. “We’ve explored permanence only through impermanent explorations. It would be nice to be able to explore it from the other side as well.” 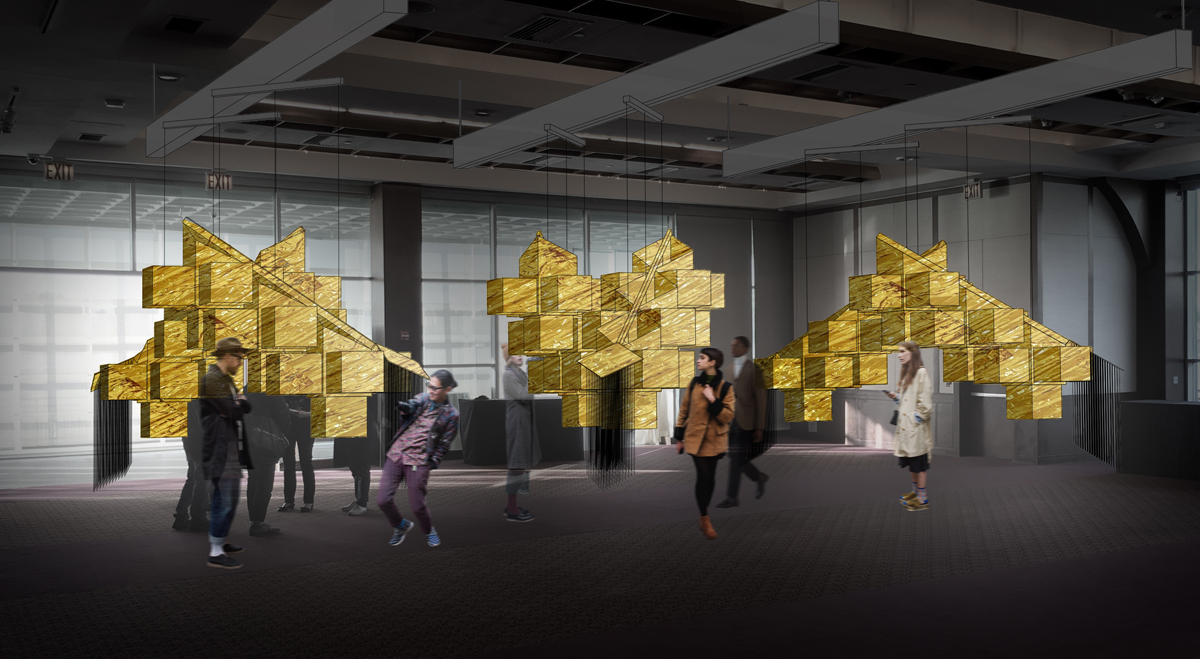 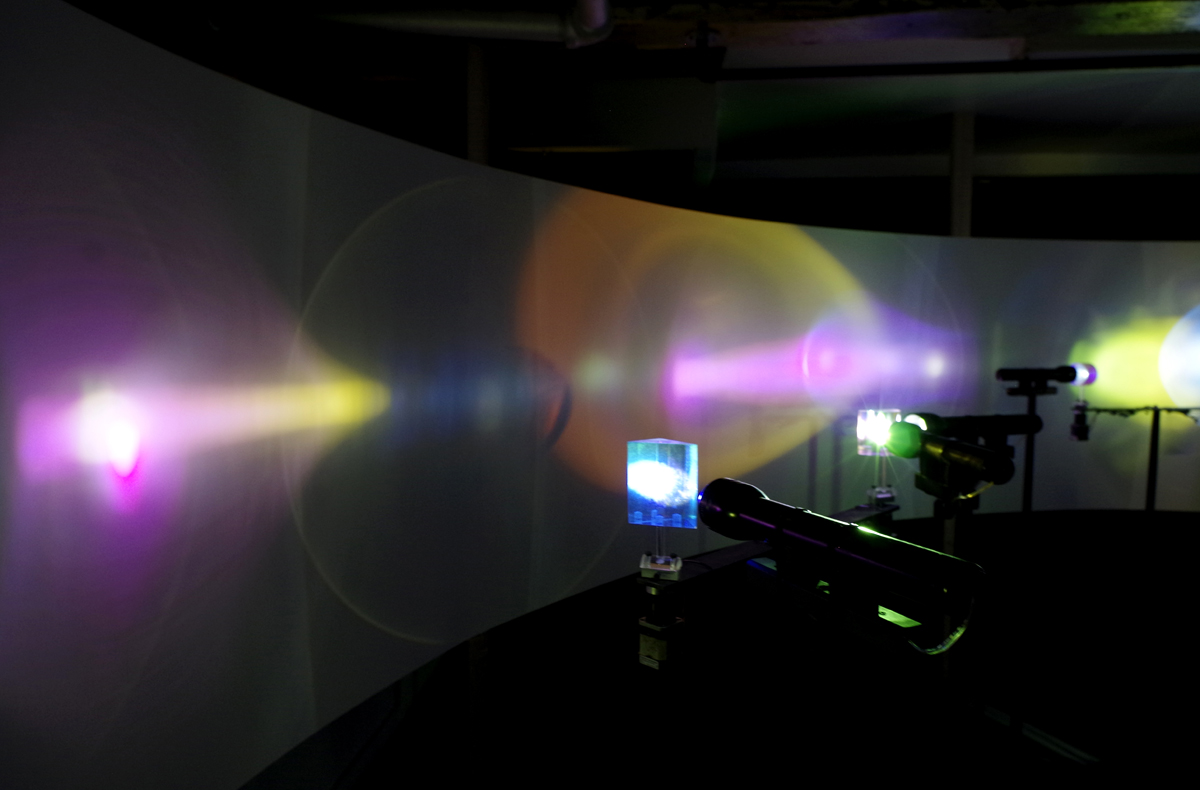 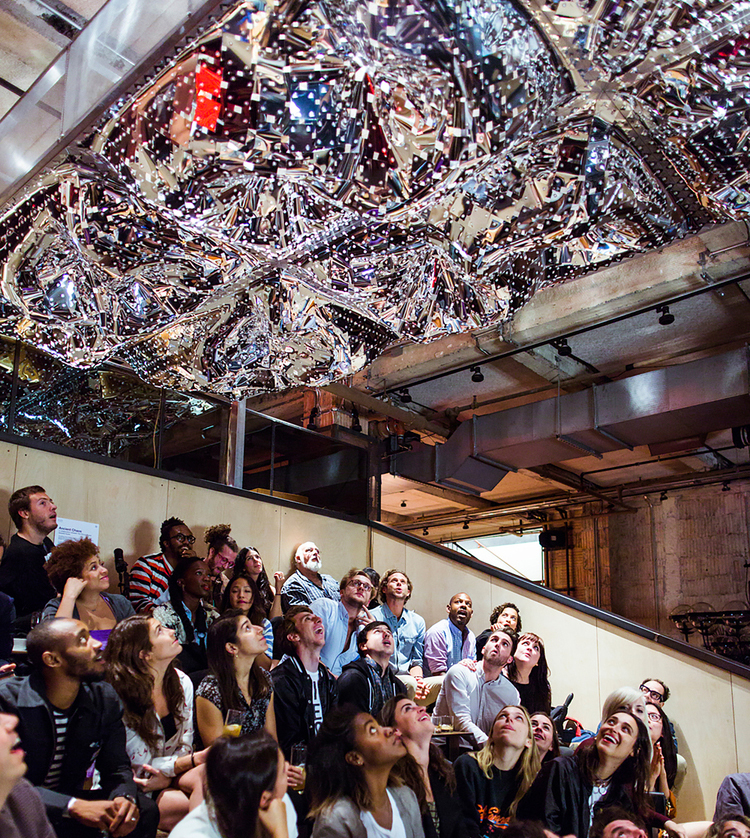 Ancient Chaos, completed in 2014 for Sonos, was an update of an earlier canopy prototype, Cosmic Quilt (2012). Powered by several stepper motors, the installation reacted to sound frequencies emitted by both music and crowd chatter. 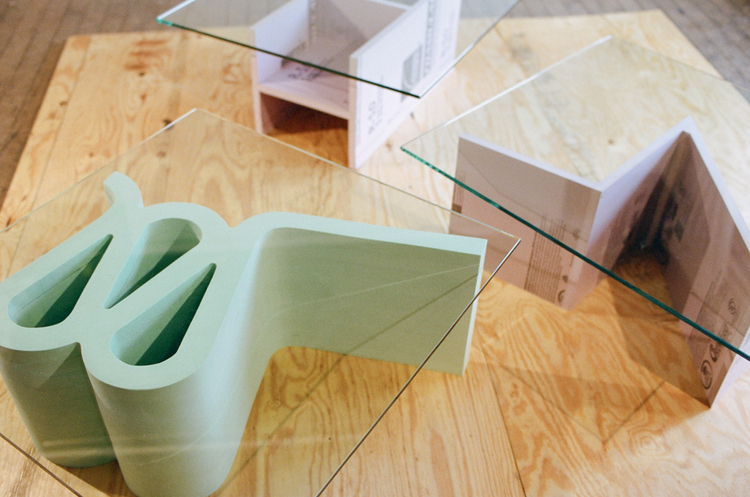 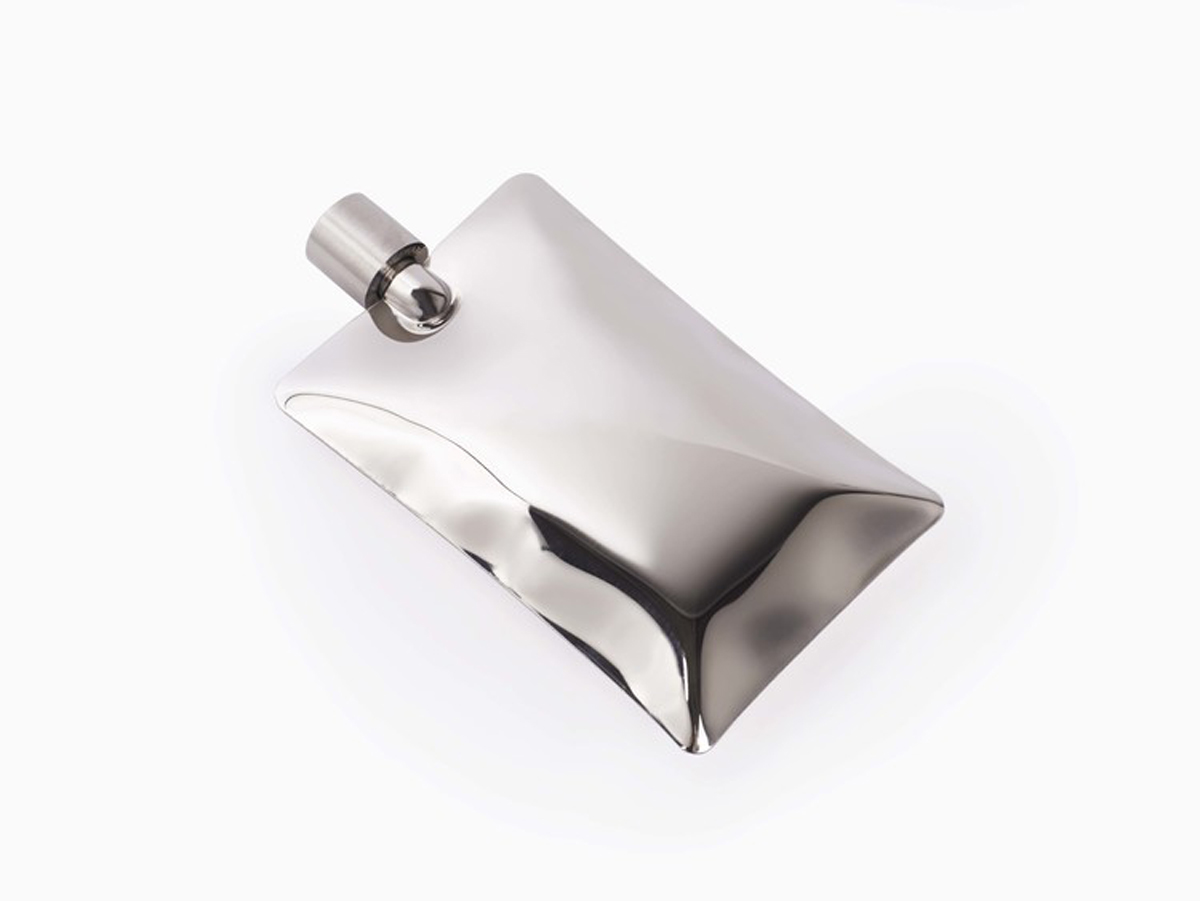 The Liquid Body steel flask, whose form has been likened to a Capri-Sun pouch, was a breakthrough for the Principals, showing that its designers were capable of moving from installations to product design. 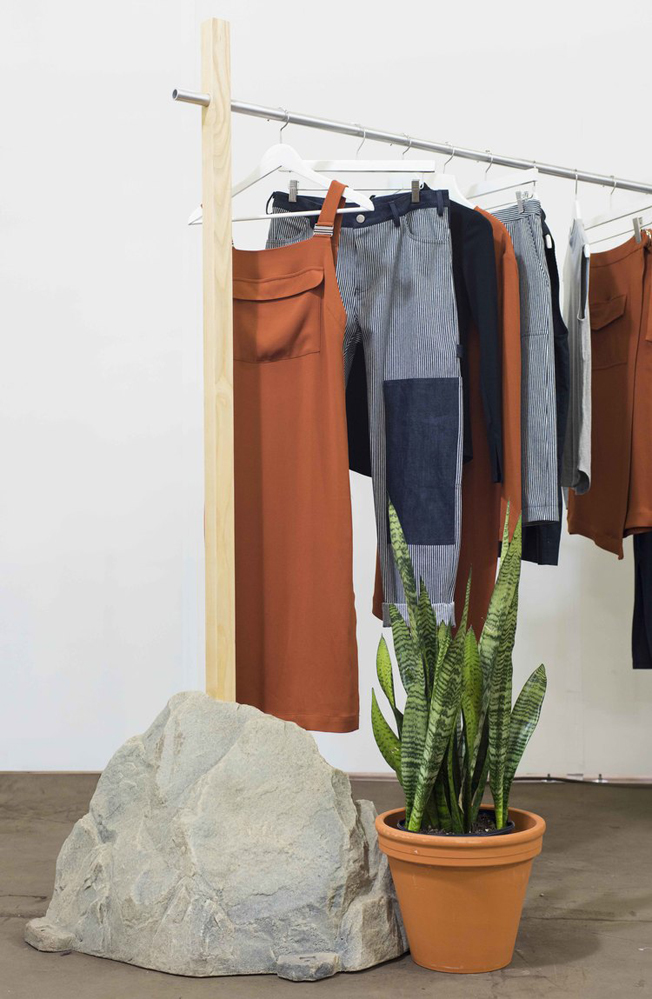