The Makers of Monument Valley are Creating Architectural Puzzles in VR

Designers Peter Pashley and Ken Wong are making a name for themselves in the gaming world by tapping into new portable and wearable technologies. 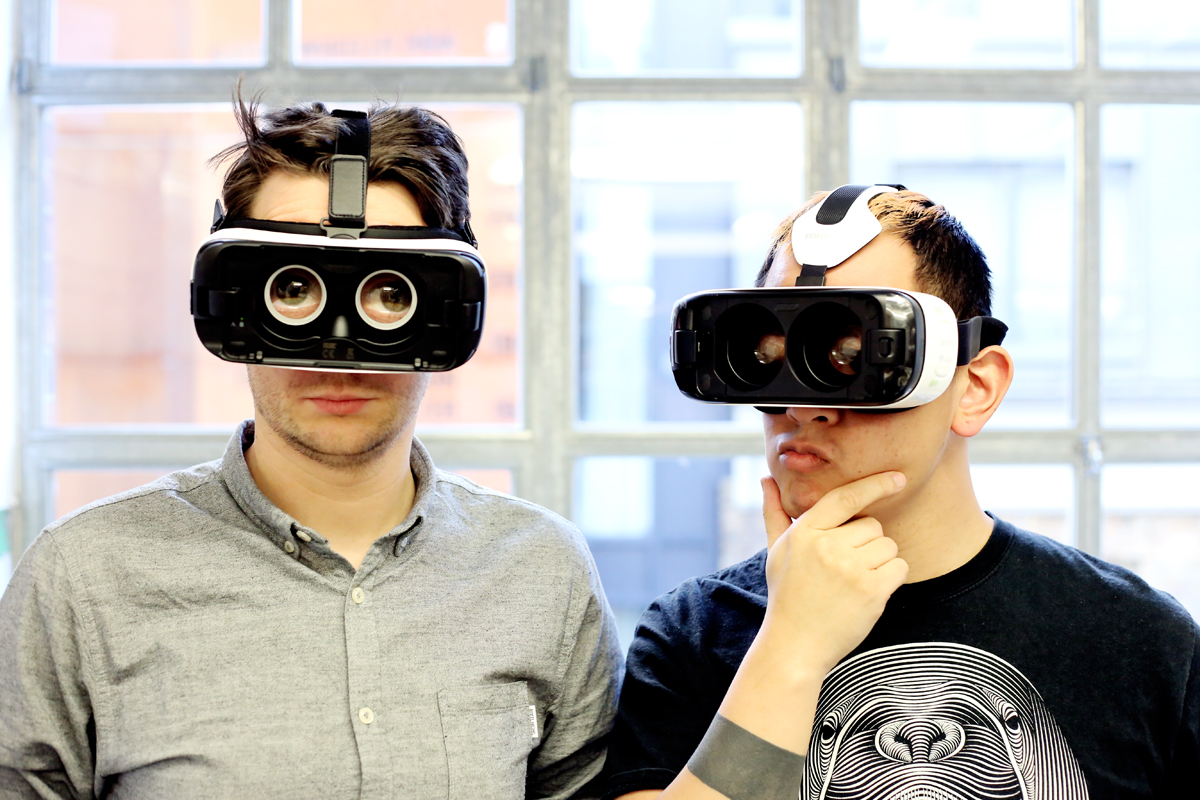 Peter Pashley, left, and Ken Wong, right, met when Pashley interviewed Wong for a job at Ustwo Games in London. Their collaboration resulted in the award-winning Monument Valley and the virtual reality game Land’s End.

Before joining the London-based company Ustwo Games in 2010, Peter Pashley created a mobile game, Aftermath—a one-man project set in a city infested with zombies. Pashley recalls that, striving for realism, he accurately proportioned the roads and sidewalks—which, to the players, made them seem ridiculously wide.

“People always underestimate how wide pavements are,” volunteers Ken Wong, the lead designer at Ustwo. Before meeting at the company and developing two groundbreaking titles there, Monument Valley and Land’s End, Pashley and Wong both worked on action-filled, combat-heavy games designed for dedicated gamers. The model at Ustwo Games, however, is very different: The company makes games for mobile devices, and so a general audience.

Wong’s first foray into video games began when he posted a portrait of a character from American McGee’s Alice to the Web and drew the attention of that game’s creators. After being called in for an interview by the studio, Spicy Horse, he was hired and moved from his native Adelaide, Australia, to Shanghai to art-direct the sequel, the 2011 console game Alice: Madness Returns. Following a few years in China, Wong was ready for his next adventure. Seeing a listing for a job in London, he applied, was interviewed by Pashley, and thus began his chapter with Ustwo.

“When I joined in the beginning of 2013, they were just wrapping up another game, and I didn’t have a lot to do,” Wong says. “So I started pitching game ideas, and one of those eventually became Monument Valley.”

A breakthrough hit for Ustwo, the game takes place around a series of fantastical buildings, represented with the player directing a princess named Ida along moving walkways and across floating cities. Taps of the finger direct Princess Ida, while parts of each building can be moved or rotated by dragging a finger across the screen. The environment is represented as an isometric projection—a familiar architectural drawing method for rendering three-dimensional buildings in two dimensions. Understanding this perspective becomes key to guiding Ida through each area. 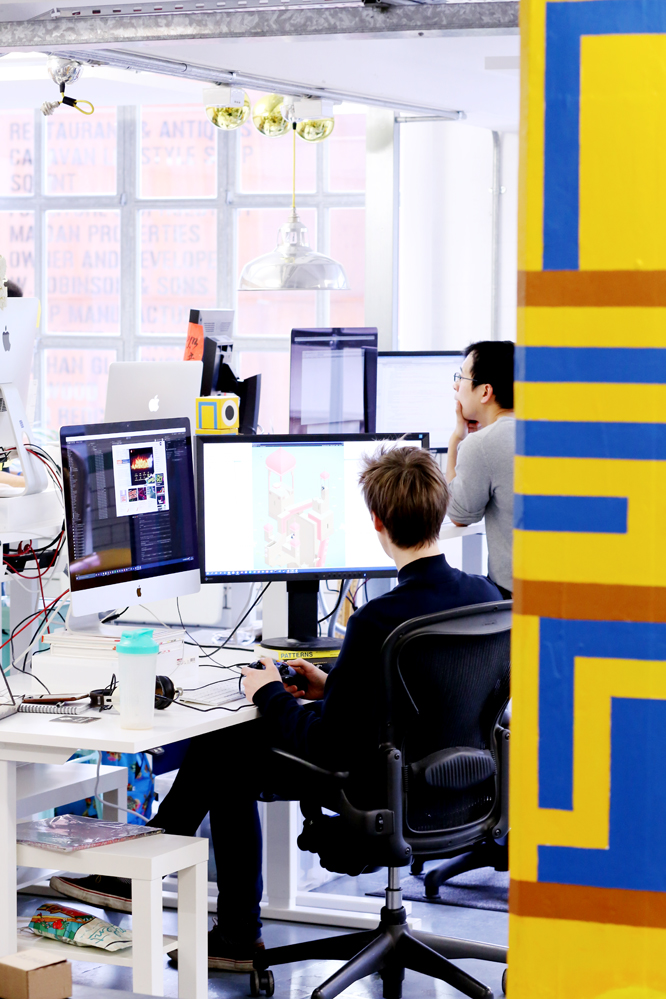 As Monument Valley took shape, Wong’s vision meant sacrificing more gamelike elements. The playing area was reduced to fit on a single screen: “Without that you can’t force great compositions,” Wong explains. Puzzles and secret rooms were cut. The game was kept short, to increase the likelihood that every player would be able to experience the complete story. “I thought we were making a game for design-oriented people—you know, hipsters,” says Wong. “We didn’t anticipate that it would reach a lot further than that.”

Indeed, its widespread appeal was surprising. By January 2015, nine months after its launch, around 2.5 million Monument Valley units had sold, and revenues stood at $6 million. Intended to earn back costs over a two-year span, the game paid for itself in ten days.

Monument Valley’s optical illusions and beautiful Penrose-stairs architecture clearly echo the impossible structures of M.C. Escher. Wong acknowledges the influence, having initially worked off of Escher’s 1960 drawing Ascending and Descending. But, he adds, “as we went on, we realized that what linked us to Escher is how he was interested both in mathematics and in art. And that’s exactly what computer games are.”

On more than one occasion, Wong has said that the inspiration behind Monument Valley was the idea of a game where architecture is the main character. The isolated, floating palaces are a built environment; the lines are straight and the curves regular.

But the scenery in Land’s End, Ustwo’s latest release, is quite different, being based on the wild landscapes of Northern Europe, particularly Scandinavia. Pashley, who took the design lead on Land’s End before being joined by Wong, explains that he and his wife often spend time on the west coast of Scotland. Although the landscape is inspiring, it is also hard to portray in a game: Open space and desolate beauty inevitably lack interactive interest. “We spent a long time on broad, open environments, which I enjoyed, but most people got either lost or bored,” Pashley explains. He had developed a strong technical prototype, but the game needed work. “You end up having to put in castles, just for something to do,” Wong adds. “VR makes just being there more exciting than it would be normally.” 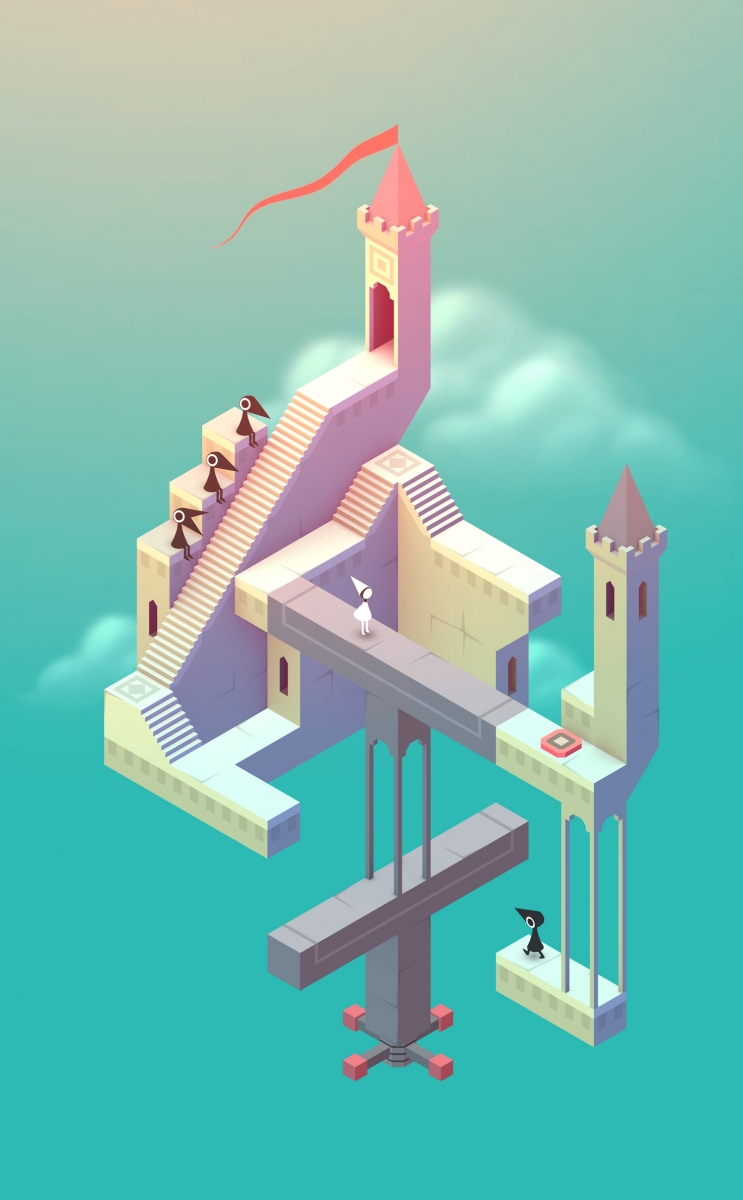 Players of Monument Valley guide avatar Princess Ida as she wends her way through Escher-like staircases and Islamic-style paviions.

The new virtual reality technology, or VR, involves more than just a change of interface; it changes the relationship of the individual to the game space. The entire visible “world” in Monument Valley can be rotated, with Ida moving in and out of view, but the players’ perspective—the “camera”—never changes. In virtual reality, the players and the characters who represent them have the same perspective. In some ways, this closely resembles the viewpoint of games played on screens with a first-person vantage point, but standard elements in the design of those games are actively discomfiting inside VR. A new grammar of interaction is being developed, but so far relatively few people have the equipment to play games in VR. This, however, is changing.

The game was designed for the Samsung Gear VR, a virtual reality headset built to work with the company’s premium smartphones. The phones fit into the headset and provide the screen, sound, processor, and motion tracking required for virtual experiences. Samsung has announced that Gear VRs will be given free to anyone preordering one of its new compatible phones. This will put well over 300,000 headsets into consumers’ hands in the United States.

Land’s End will feature in one of the three free content packs offered along with the headset. Already one of the best-selling games for Gear VR, Ustwo’s first VR offering is likely to be the introduction for many to virtual reality’s approach to the space and structure of game worlds.

Land’s End, the new VR game designed by Pashley and Wong for Ustwo Games, is based on the rocky shoreline of West Scotland.

At this stage in the evolution of virtual reality experiences, there are very few hard-and-fast rules—developers are all feeling their way around. For example, Land’s End’s game begins with a warning that it is best played standing or sitting on a stool or a swivel chair. The first step players have to take involves turning around completely— in effect, a test that they have followed the game’s advice.

The game’s explorable, three-dimensional world could have been finished without adding buildings, but Pashley felt that it was important to include signs of human architecture. “Having something built by humans allows you to interpret the scale of the environment,” he explains. “The natural world is fractal, so seeing a little bit of it doesn’t really help you to know whether you’re looking at a piece of rock or the ridgeline of Mount Everest.”

In Land’s End, the player solves puzzles left by a departed civilization. The deserted landscape and funerary motifs were inspired by architecture associated with Neolithic sites, Pashley says. “When Neolithic sites were actually in use, there would be a huge amount of timber architecture. And the more human spaces—houses, windows, and doorways—would have been wooden and therefore temporary. So what we are left with are these strange-seeming subelements of that architectural style.”

Ustwo Games’ own design sensibility, and the worlds and forms that it depicts, follows the requirements of the devices for which they are developed. “We talk a lot about being platform-perfect,” says Wong, in conclusion. “That’s core to our philosophy. Touch input is great for a sense of intimacy, because you’re directly touching the game world.”

Whatever Ustwo Games does next, it will be doing it with new creative leadership. Wong is speaking on his penultimate day at Ustwo Games: “London’s not my city. So I’m going back to Adelaide for a bit and then starting a game studio in Melbourne.” Wong is leaving at the end of a project, meaning that his departure and replacement can be managed in good order.

“As with the departure of any huge character, we’re presented with both challenges and opportunities, but we’ve already seen the members of our highly talented team step forward to embrace them,” says Dan Gray, the head of the studio. “We’re working on two games with two new leads, each of whom is drawing on the wealth of experience and expertise we’ve already built to create something even better than Monument Valley.”

Easier said than done. Still, the success of the two games Pashley and Wong have worked on together, Monument Valley and Land’s End, has moved Ustwo Games from a development team inside a larger product design studio to a business division in its own right. It’s likely that its designers and developers will continue to argue over the perfect width for a sidewalk. 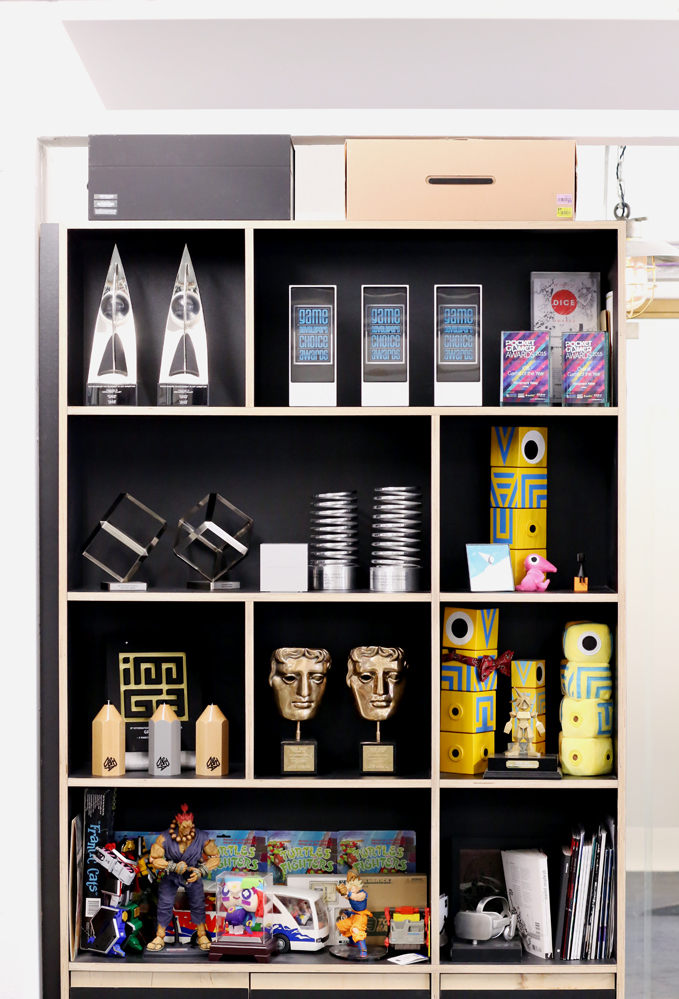 A shelving unit shows off the myriad awards given to Monument Valley since its debut.