Rethinking Architecture, From a Robot’s Perspective 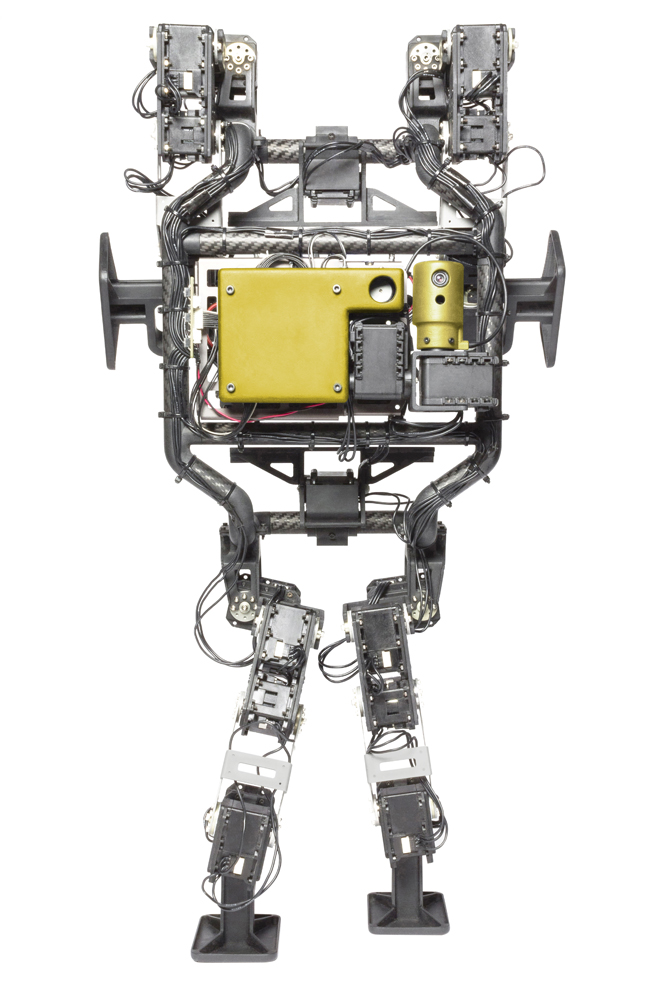 Architect Michael Silver is a self-taught roboticist based at the University at Buffalo. There, he cofounded the Sustainable Manufacturing and advanced Robotic Technologies (SMaRT) group that develops robots, such as the two-legged OSCR-3 prototype.

“My first robot was made out of Scotch tape and Spirograph gears,” says architect and robotics autodidact Michael Silver. “It ran off nine-volt batteries and a little stepper motor, which was hard for a 12-year-old to find. All it could do was grab a test tube out of one rack and swing it around to another one.” Despite the dearth of motors available to tweens at the time—“This was pre-Internet!”—Silver insists that such childhood endeavors were common in 1976.

Perhaps, though most similarly precocious children might not have pulled off such a feat, nor continued to follow their automation whims as Silver has. Having taught at Cornell, Harvard, and Yale, Silver is currently employed as an architecture professor at the University at Buffalo in western New York. Following a call for proposals in 2014, the university inaugurated its $25 million Communities of Excellence initiative, which established interdisciplinary groups of faculty focused on particularly pressing areas of research. Silver is a coleader of the Sustainable Manufacturing and Advanced Robotic Technologies (SMART) community, one of three proposed groups selected by the university (the other two concentrate respectively on global health inequities and the interrelationship between the human genome, microbiomes, and the environment). SMART champions a multifaceted approach of “design across scales,” as Silver puts it, applying its eponymous focus on sustainable manufacturing and robotics to everything from product design to manufacturing processes to architecture and civil engineering. The group, which launched in the past year, is still in the nascent stages of its five-year charter. Intended to be self-sustaining after 2020, SMART is pursuing seed money, and is in the process of building out a permanent space. Current projects include micro-aerial vehicles, next-generation 3D-printing systems, and construction-site automation, Silver’s own particular area of interest.

Silver’s conception of these construction sites tends to avoid the more widespread speculations concerning automation, steering clear of nightmarish visions of robot swarms speedily pouring concrete and installing drywall as jobless laborers and tradespeople look on in anger. Instead, Silver proposes what he terms co-robotics, or “the development of automated systems that benefit both labor and management in existing trades with a focus on equity, craft, and environmental sustainability.”

At SMART, co-robotics primarily means designing machines to assist with masonry work. (Nils Napp, a computer science professor and robotics expert who works with Silver at SMART, describes another project that optimizes automated stacking patterns for mortarless structures whose construction requires levels of precision difficult for humans to match.) Silver has a long-standing relationship with the craft, having collaborated for years with the International Masonry Institute (IMI), an organization bringing together the International Union of Bricklayers and Allied Craftworkers and employing contractors to provide education and industry development. In 2009, IMI funded the development of Silver’s AutomasonMP3, open-source design and construction software that eliminated the need for paper plans by providing smartphone-ready audio instructions for masonry patterns. 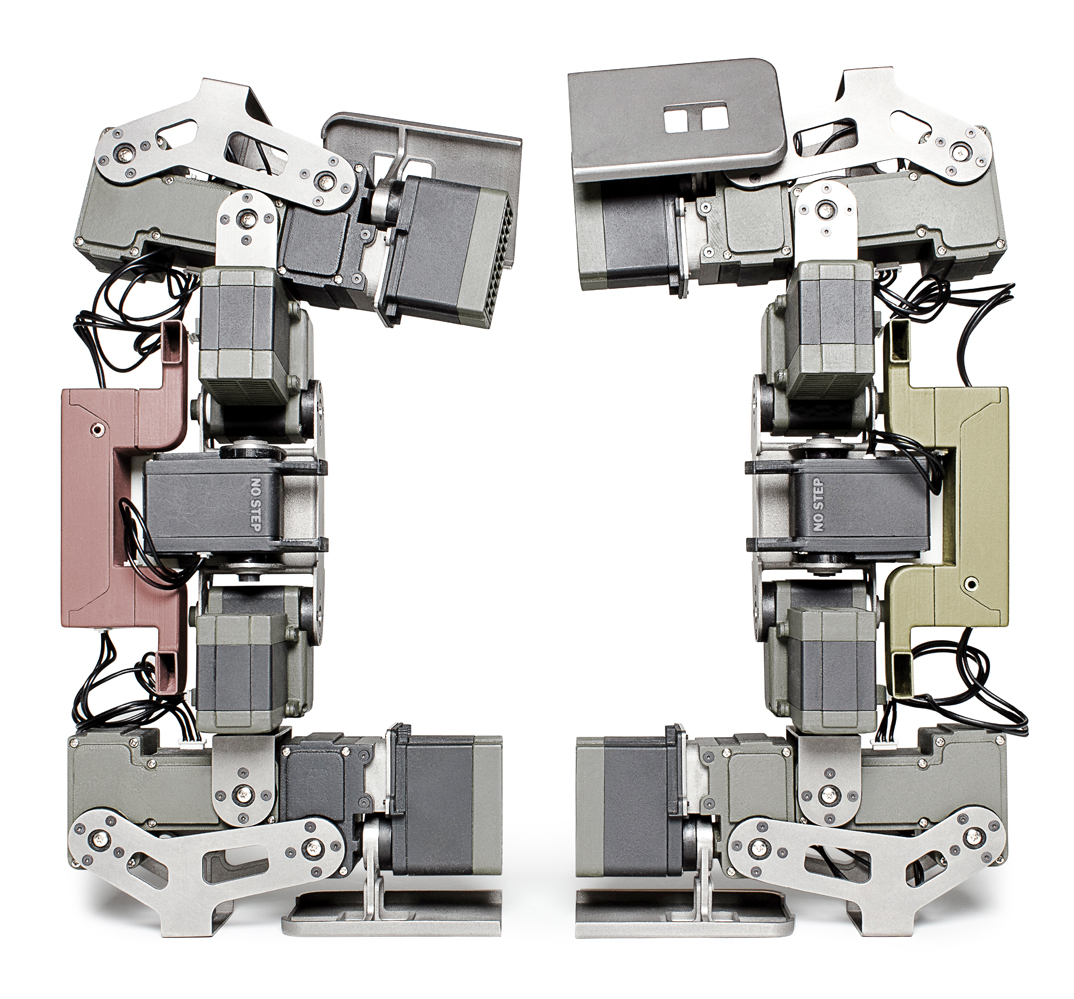 Silver’s automated helpers fall under the rubric of “co-robotics,” a term meant to allay fears of job-stealing robots. Above: Two OSCR-2 robots standing on one leg.

Alongside his colleagues and students at SMART, Silver has been busily building a number of robot prototypes meant to assist with the mason’s simple, if dangerously repetitive and stressful, task of hauling bricks. Originally dubbed OSCR—short for On-Site Construction Robots—the prototypes have become increasingly adept at traversing more varied and difficult terrain and handling progressively heavier and more complex loads. OSCR has since evolved into the Loft Prototype, which will be “around the size of a teenager,” according to Silver, and able to lift actual bricks. (Currently, SMART’s robots can only carry lightweight bricks.)

Such prototyping allows researchers to experiment and test certain capabilities, of course, as SMART’s numerous experts from various disciplines weigh in on design, production, and programming challenges as the work progresses. More unusually, it also gives those at SMART multiple opportunities through IMI to begin a conversation with labor about the technology’s implementation, generating feedback regarding not only how the robot performs, but how comfortable workers are with its use.

“I want to build a tool that is actually usable by the trades,” Silver says, a sentiment much appreciated by those at IMI. “Mike thinks about maintaining the dignity of labor,” says the institute’s national director of industry development, David Sovinski, recalling Silver’s convincing presentations at a union convention last year. “He opened a lot of eyes to the idea that automation can help us,” Sovinski continues, “and not replace us.” While co-robotics clearly offers management-pleasing increases in productivity, Sovinski explains, it also provides masons a respite from work falling under the three Ds of robotics—dull, dirty, or dangerous—thereby extending the length of their careers. Moreover, as the trade’s ranks dwindle because of retirement (or injury), co-robotics can help attract the next generation of craftspeople who might otherwise be enticed by a more obviously high-tech sector. 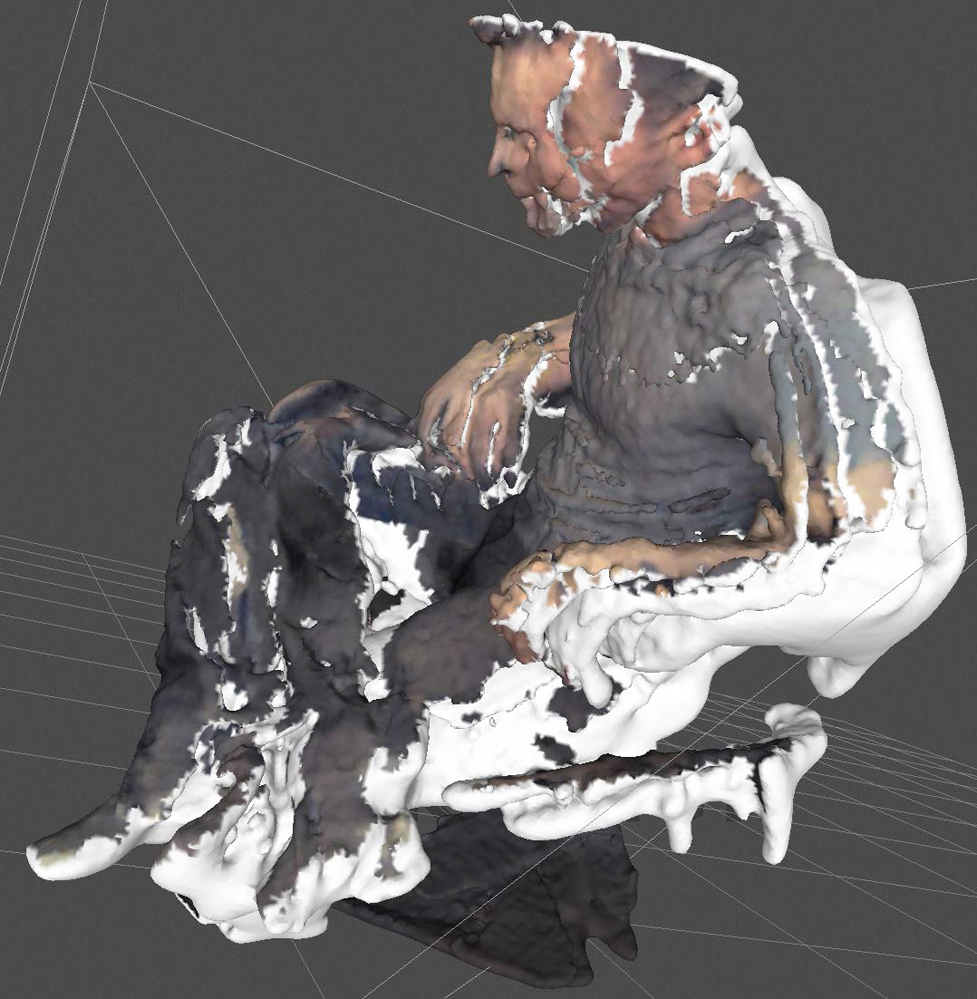 A 3D-scanned image of Silver captured by one of his robots.

“My real interest is to rethink architecture from the perspective of robotic systems,” says Michael Silver. “How do you make the robot inseparable from the architecture?”
It’s a vision of our automated future that keeps the human subject at its center, a perspective somewhat rare among techno-pundits proclaiming a work-free paradise of leisure and concerned skeptics worrying about an impoverished hell of unemployment and purposelessness. Silver’s concerns are charmingly humanist in a pragmatic sort of way—he dismisses the advent of strong (i.e., humanlike) artificial intelligence as being not so much impossible as useless—and refreshingly directed toward the near future. “A robot that can really work collaboratively with humans is still far off,” he admits. “How this thing plays out over time is anybody’s best guess.” This uncertainty does not equal equivocation or avoidance, Silver being well aware of why one might be plausibly worried about automation. Instead, he grants that these changes are coming, while also maintaining that they might not be entirely terrible. If anything, given the ample time and attention he’s paying to the needs of tradespeople, Silver seems to enjoy the challenge of thinking through how society might locate the human laborer in a more automated world.

The time frame of robotics research is still long, however, even for immense research initiatives like SMART. “Building a robot alone takes about a year,” Silver says, while “developing the software for it takes another year and a half.” Among SMART’s short-term research goals are better leg-based mobility, site navigation, and limb-specific efficiency of movement. While SMART’s robots are currently meant to assist masons, future iterations could certainly be used as a basis for other sorts of construction-site activities, from composite taping to moving lumber. (Silver describes a student project involving a robot that carried two-by-fours up a ladder and then fell off the platform to the ground. There were, he notes, half chuckling, legal issues to consider.)

Ultimately, Silver sees his robotics work as feeding into “architecture with a capital A,” as he calls it. “My real interest in the very long term is to rethink architecture from the perspective of robotic systems. How do you make the robot inseparable from the architecture?” To that end, Silver imagines a speculative exhibit based on the Loft Prototype. Hidden in a loft floor covered in brick, the machine would continually build and take apart furniture, walls, and rooms, in an unceasing cycle of form and formlessness. Consisting of nothing but bricks, an airy space, and a robot, the installation would combine a minimalist sculptural sensibility and a maximalist obsession with the self-organizing complexity of robotics—a fascinating offhand thought that almost seems like a throwaway, if not for Silver’s conviction that this will work out in the not-so-near, not-so-distant future. 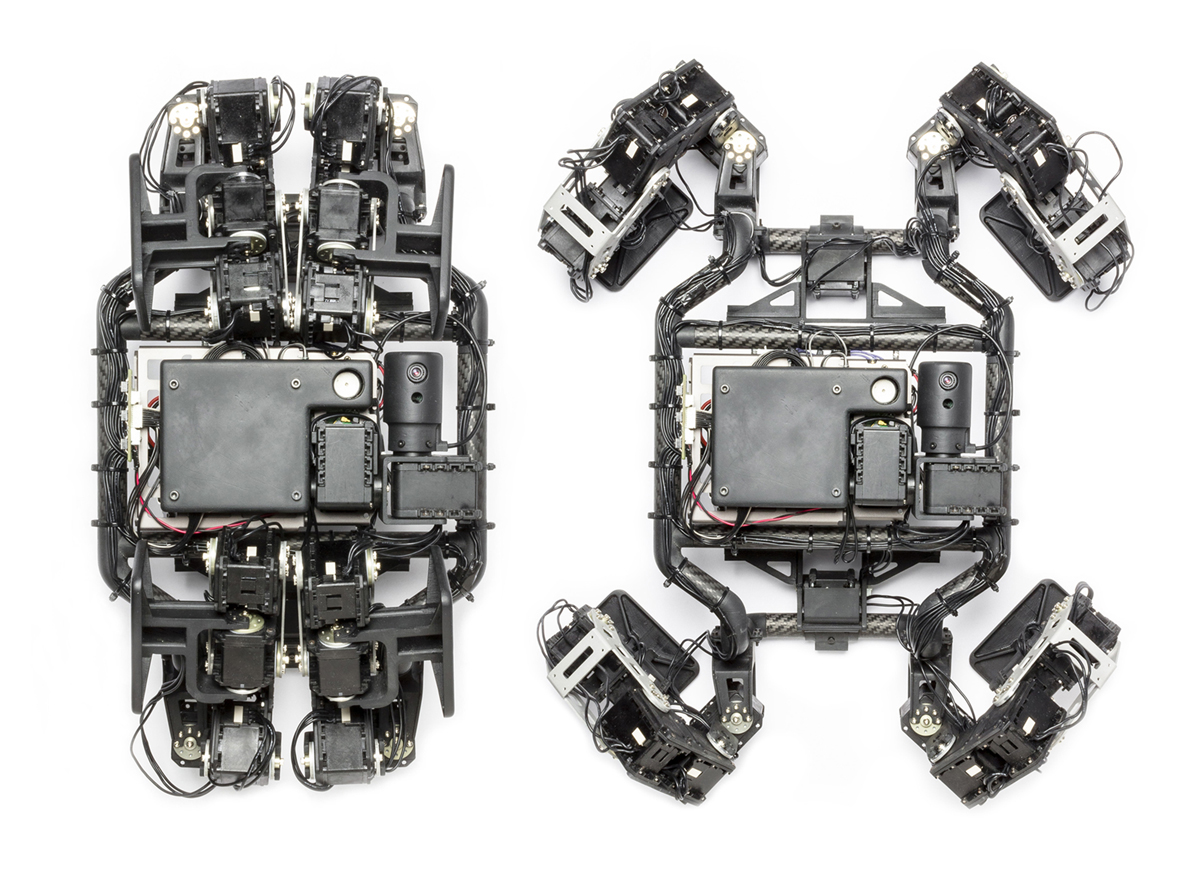 An OSCR-3 robot in stowed (left) and deployed (right). Silver consulted with labor organizations such as the international Masonry institute (IMI) in working out the design and functionality of SMART’s robots. 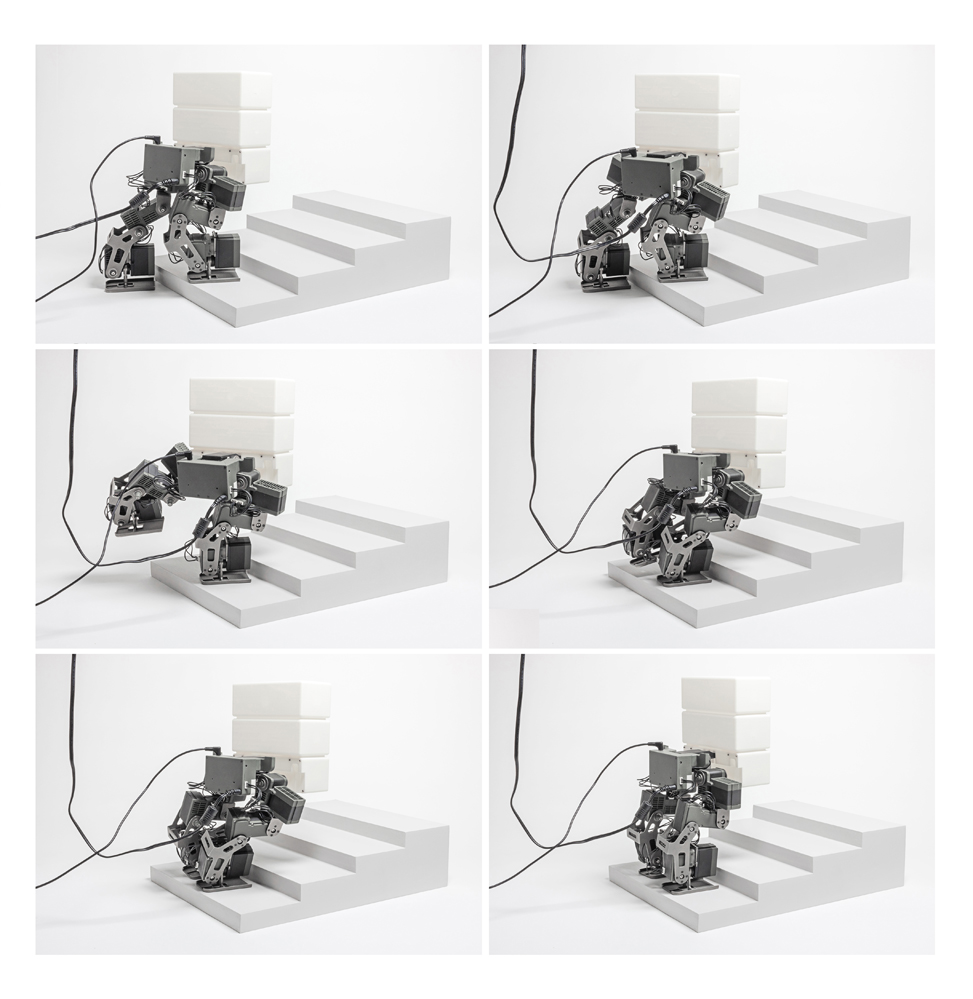 This dialogue helped cement Silver’s standing among the bricklayers and masons who he says will benefit from the introduction of robots into the construction workforce. Above: an OSCR-2 carries lightweight bricks up a staircase. 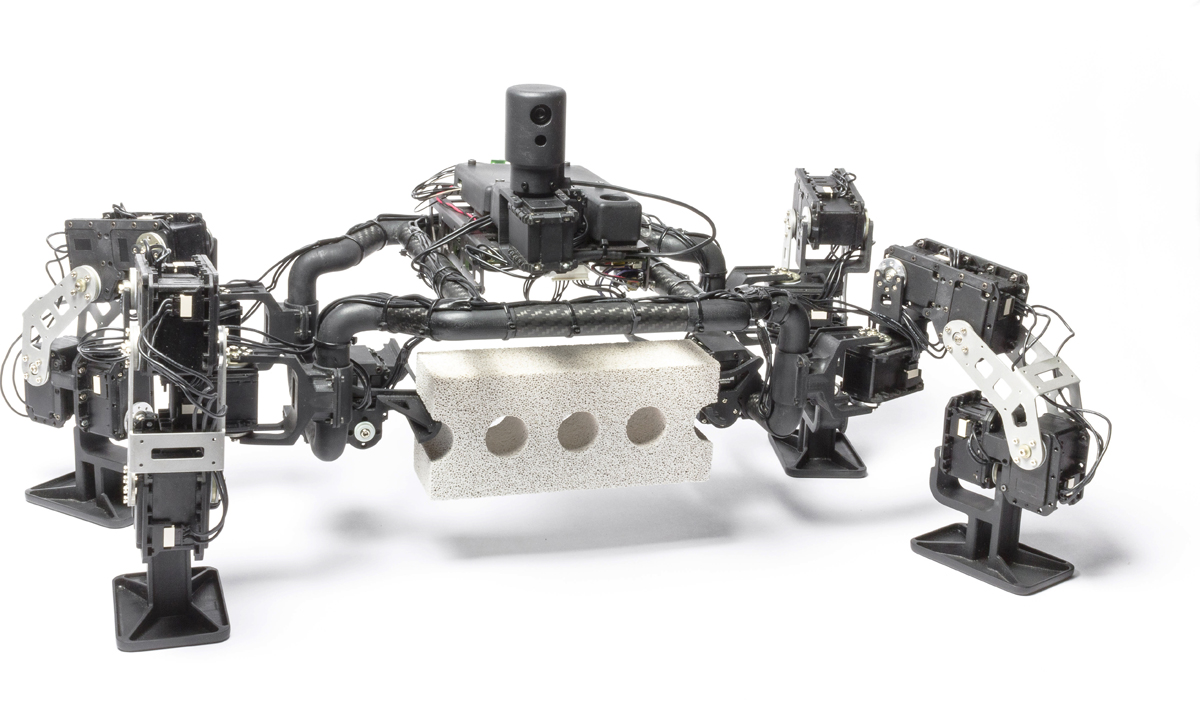 An OSCR-3 picks up a lightweight brick. As of now, the OSCR (On-Site Construction Robots) prototypes are designed to alleviate the drudgery implicit in masonry work, but Silver foresees a host of new robots that can fill other construction-site roles.