The 34-year-old wunderkind will go from objects to interiors and architecture with his design for the Das Haus installation at imm cologne. 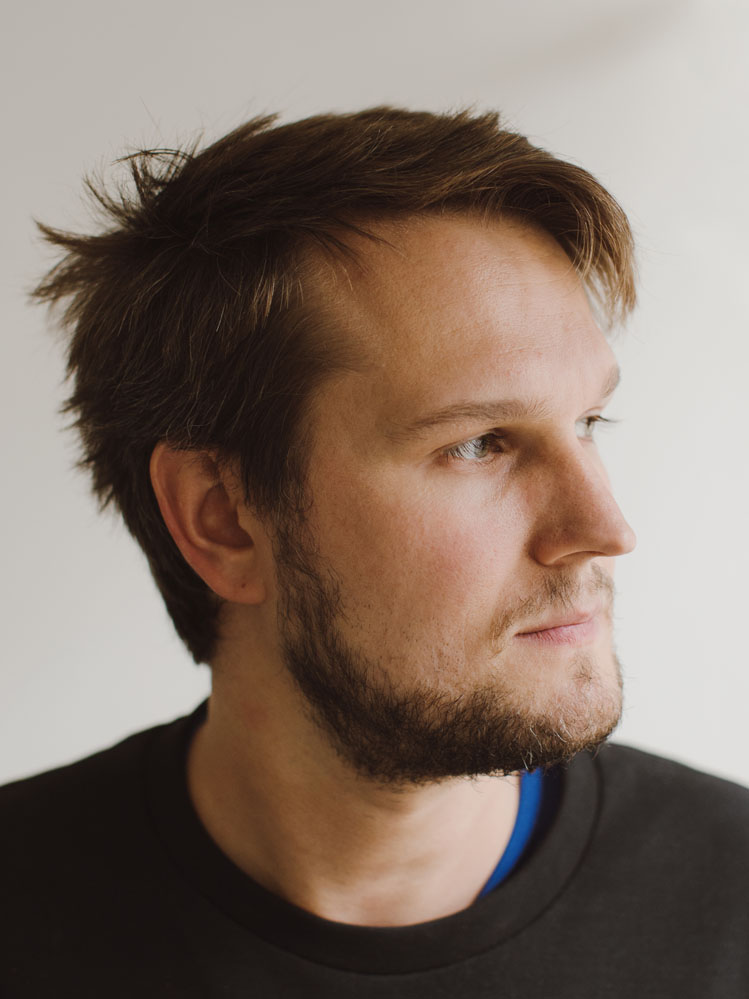 When writing about designers, it’s easy to discuss their penchant for materiality or color. While the 34-year-old German designer Sebastian Herkner has unusual and original ideas about both, one of his most exceptional talents is how he appears to effortlessly transcend binary relationships (high/low, design/craft) along with geographic and disciplinary boundaries (interiors/architecture/ fabrication). Herkner combines design and craft, global and local, with a stubborn curiosity. In 2016 he will go from objects to architecture with his design for Das Haus at imm cologne. The program invites up-and-coming designers to develop domestic environments at one of Europe’s most important interiors shows, giving them the chance to create an immersive vision of home.

Herkner is a bit of a wunderkind, born in 1981 and operating independently, at least in part, since 2006. “The aim was always to have my own studio, work on my own with a team,” he says. Educated at the university of art and design in Offenbach am Main, a satellite city of Frankfurt, Herkner still lives in town and has even occasionally taught at his alma mater. His work is elegant; one of his first successes was the Bell Table, a mix of glass and bronze with unusual lines and a satin border. Characterized by its colored glass base and striking silhouette, the table plays just on the edgy side of something essential. Meanwhile, the color tones—reminiscent of Crayola’s Bold and Oil Pastel phases, unusually well resolved colored-ink markers for 1980s kids—have a fresh and clean aspect missing from the aesthetics of German restraint or Dutch bombast. His work is often beautiful, though, he says, with hackles slightly raised, “‘beauty’ became a stupid word in design,” rightly irritated at design-theory language fashions.

At his small studio, a former leatherworks near Offenbach’s compact center, Herkner works with a team of up to four people. Inside, his humor and curiosity are readily apparent: A sizable collection of plastic utensils, plants, books, jumbled objects from travel, and hanging fabrics crowd the cozy rooms. Amid the many toys and distractions that populate the office, his team tends to computers, which display 3D models of Das Haus and textile color tests for various projects. “I like the ugly color combinations,” says Herkner to an assistant, prompting laughter. There’s just enough office organization to see the logic of the work, just as Herkner seems serious enough to offset a particularly acerbic kind of humor.

“I really like to work with people, together, especially with crafts. . . to collaborate, create something new, with respect to heritage and their knowledge.”
He holds up a standard porcelain light socket, ubiquitous since German apartments are rented without ceiling lights installed, and the affordable standard fix is a functionally beautiful pale ceramic. He then places a gold foil cylinder inside—a bottle wrapper of a popular beer. Herkner combined it with the socket spontaneously while working on a vase for the German luxury porcelain manufacturer Rosenthal. The decidedly mundane and almost universally appreciated objects were recast into the Falda Vase, a simple, archetypal, round pottery vessel with an explosion of pleated gold-plated porcelain at the neck. Herkner grins, satisfied at his everyday magic.

A marked respect for craft is present in all of Herkner’s work, influenced by global travel and sources closer to home. Germany, where many craft traditions are still alive, is a good base for exploration. “The Oda Lamp started when I asked how big a blown glass sphere could be,” says Herkner. The result is a large globe of glass, almost impossibly thin, with the same wonder of a soap bubble, frozen just before bursting. Of course, the design is more than an exercise in pushing craft to its limits; there’s a deft interplay between glass, base, and light—the hand of the designer. “I really like to work with people, together, especially with crafts,” says Herkner, explaining recent trips to Colombia and Zimbabwe, where he went to “collaborate, create something new, with respect to heritage and their knowledge.” His craft interest is well suited to a curiosity about the domestic sphere, making his creation of one at imm cologne fitting. 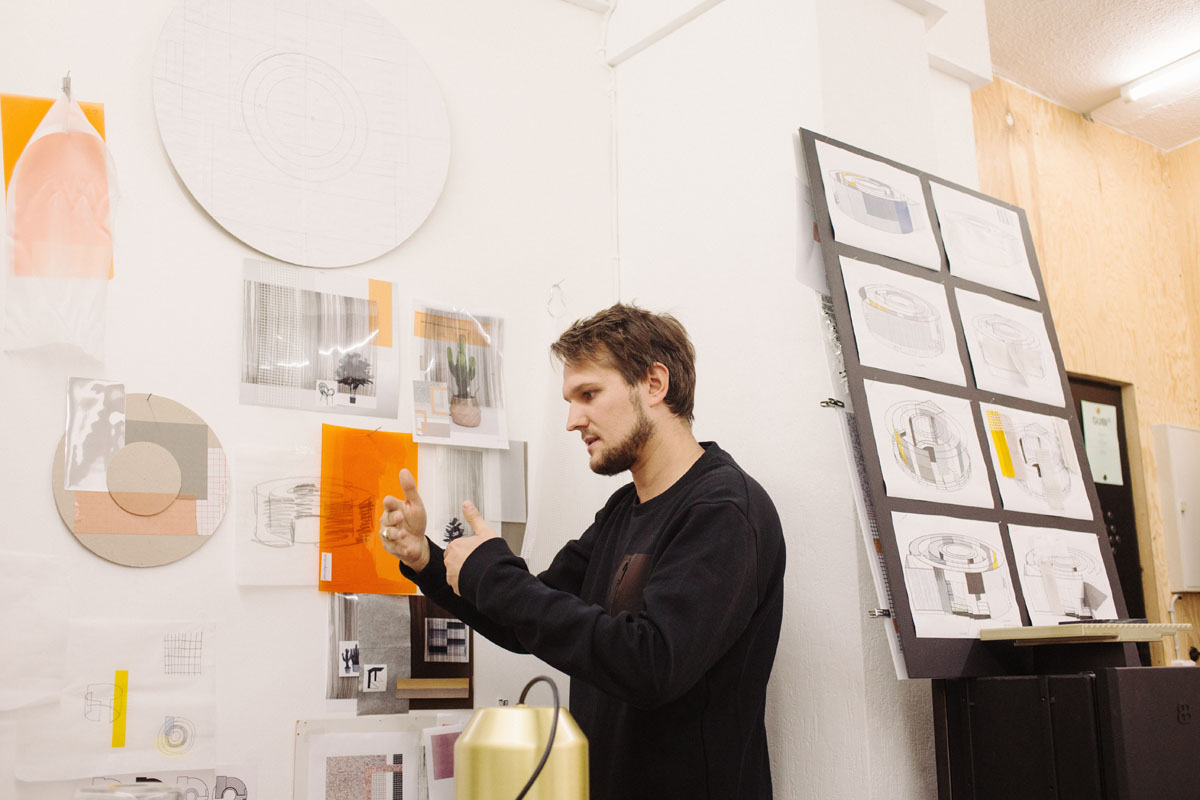 Herkner explains his design for the 2016 imm cologne Das Haus installation. The pavilion is circular in shape and subdivided by a series of curtains that are hung around the office in an ad hoc fashion.

Herkner’s Das Haus is made out of fabric—a house of curtains. “You probably don’t have curtains in your house, they are something out of time, from Grandma,” he says. “There are no real walls—there’s just transparency and flexibility.” The space is circular, a natural form for soft surfaces that eschews the usual hard lines of Teutonic architecture. Herkner’s studio model is square, acknowledging the necessity of fitting circular space into a rectilinear congress hall, but the design intention is clearly figured in arcs of material within the box. Hanging in the studio are various tests for materials, including a fetching bright amber PVC panel, a textile panel with laser-cut perforations, and a scrunched foil sheet. “It’s really about materials, which is important in all my work,” Herkner says.

All of this pliable material is tailored into an elegantly layered whole, and connected with ideas that come from contemporary architecture. Switching tacks, Herkner cites Petra Blaisse’s curtain for the OMAdesigned Rothschild Bank in London. Layered on the studio walls are examples of the designer’s other large-scale fabric installations. Similar to Blaisse’s simple Dutch pavilion at the 2012 Venice Architecture Biennale, where curtains were used to transform the hard-angled pavilion interior, Herkner’s Das Haus resists rectilinear partitioning. This is no simple trick, to create an almost anti-architectural space with soft, flexible curves—and another demonstration of Herkner’s wry wit.

Das Haus has been running since 2012, with a slate of designers from around the globe, including Doshi Levien from the U.K. and India and Neri&Hu from China in 2015. For a fair filled with booths from all the top manufacturers, Das Haus is the chance to integrate them into an actual interior. This seems intended to invite questions about what an interior space is or can be, and how we occupy it—Danish designer Louise Campbell’s 2014 version was a wonky meditation on openness and masculine and feminine forces, complete with a wall of beds and a kitchen with every cooking utensil hung on the wall.

Herkner’s is perhaps less rigidly conceptual, as one can imagine freer, easier enjoyment of his Das Haus. He will fill the house with objects from his oeuvre and those of friends, as well as curios obtained abroad. Herkner references yurts and other impermanent, mobile structures, but he is inspired just as much by recent travels as by “camping with my family, every night in a different place,” as a child. In contrast to some of the past Das Haus editions, his is a convincing environment where one could imagine living, if only for a holiday weekend. 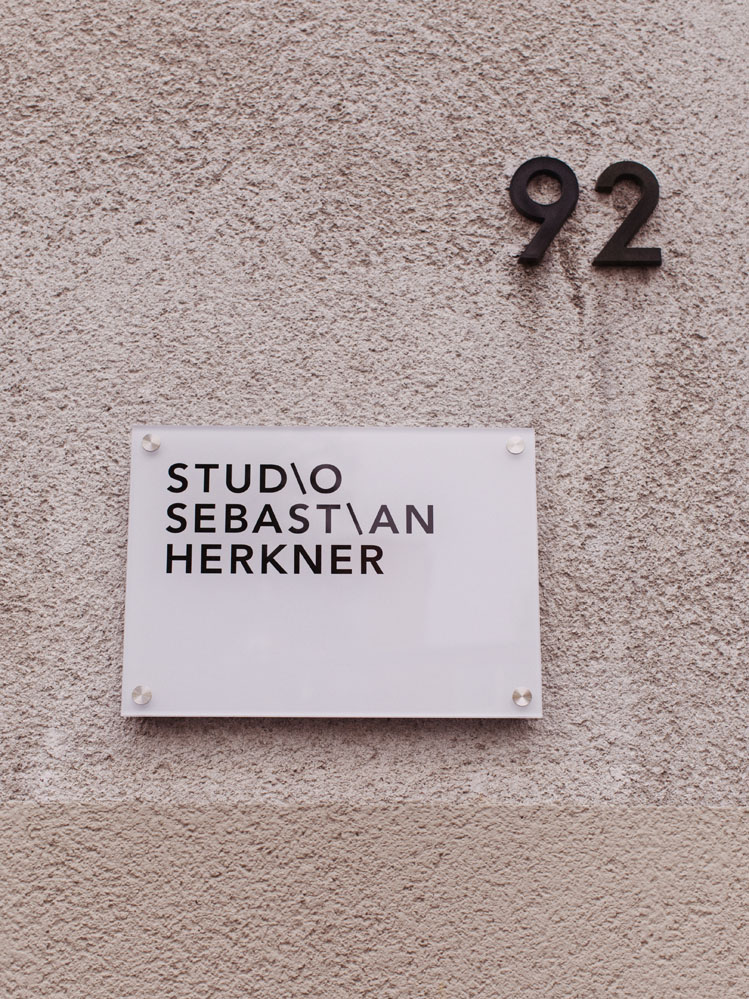 Herkner and his small atelier are based out of Offenbach am Main, a satellite city of Frankfurt. 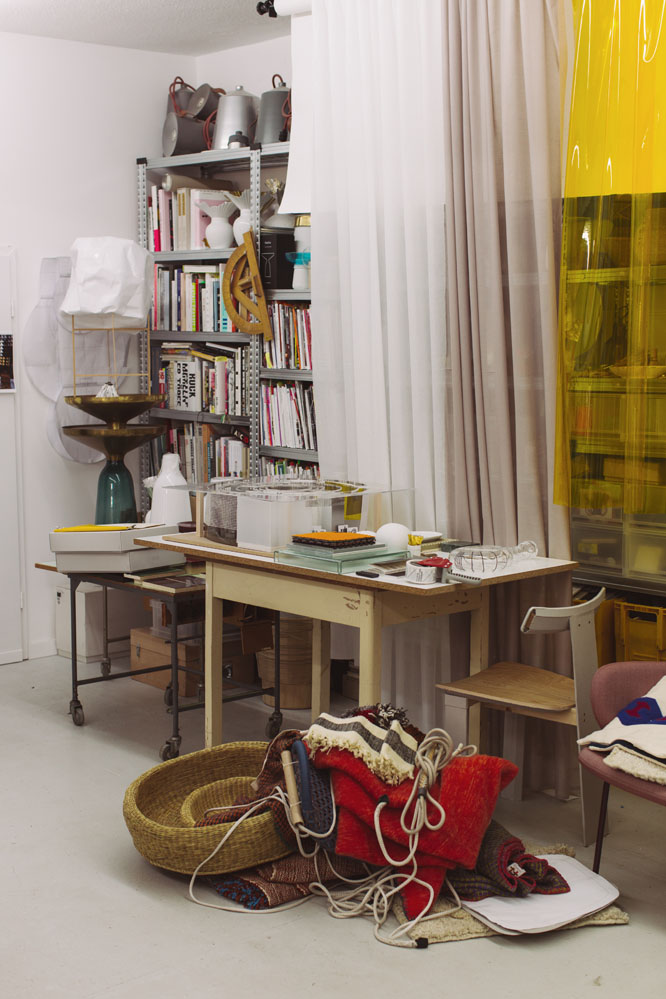 There is order to the seeming chaos of Herkner’s office. A Plexiglas model of Das Haus (center) can be made out among material samples, knickknacks, pieces of cloth, and books littered around the workspace. 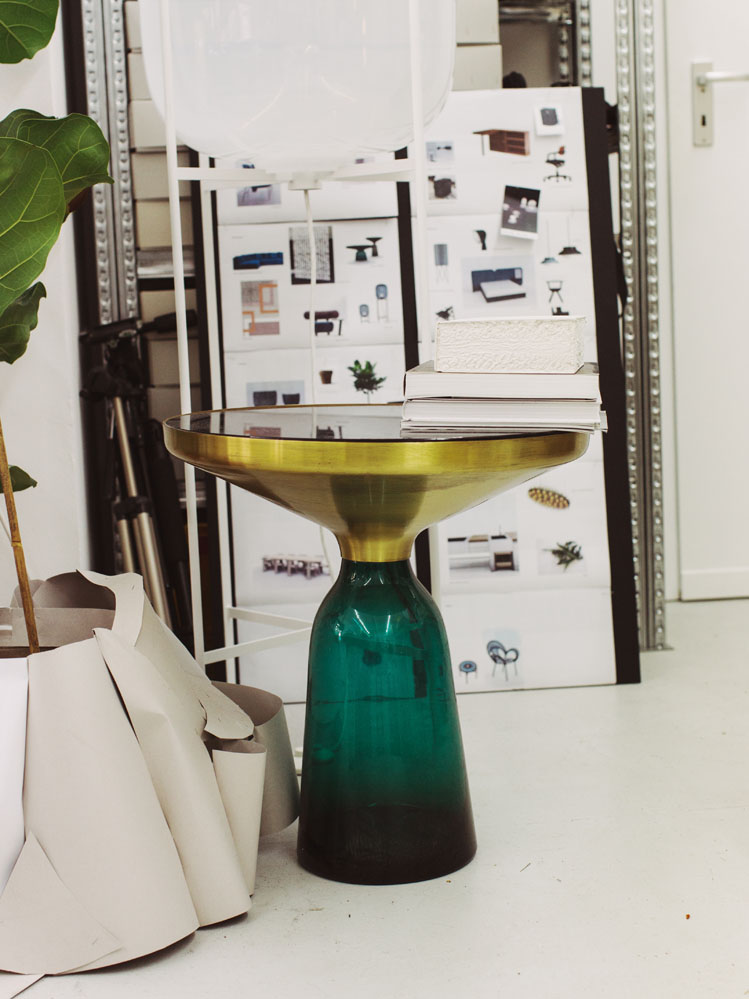 One of Herkner’s early successes, the Bell Table is available in the United States through Luminaire. 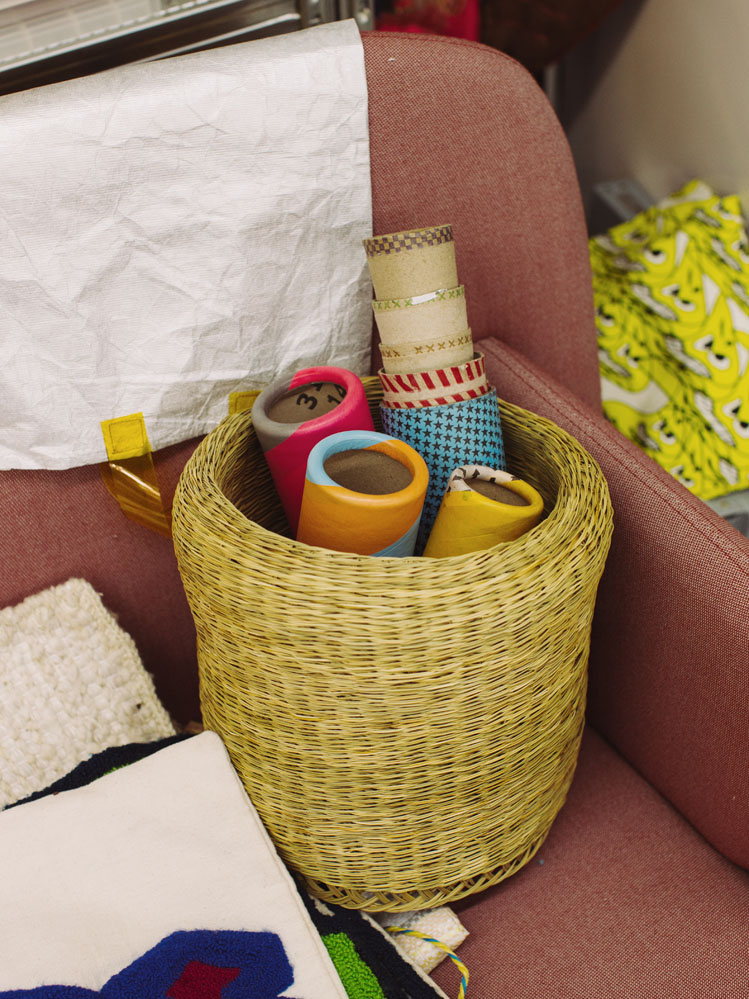 A basket woven using a technique Herkner learned during workshops at the Binga Craft Centre in Zimbabwe. The designer visited the center in April 2014 as part of a program sponsored by a cluster of institutions including the British Council, Alliance ​Française, the Goethe Institute, and the National Gallery of Zimbabwe. 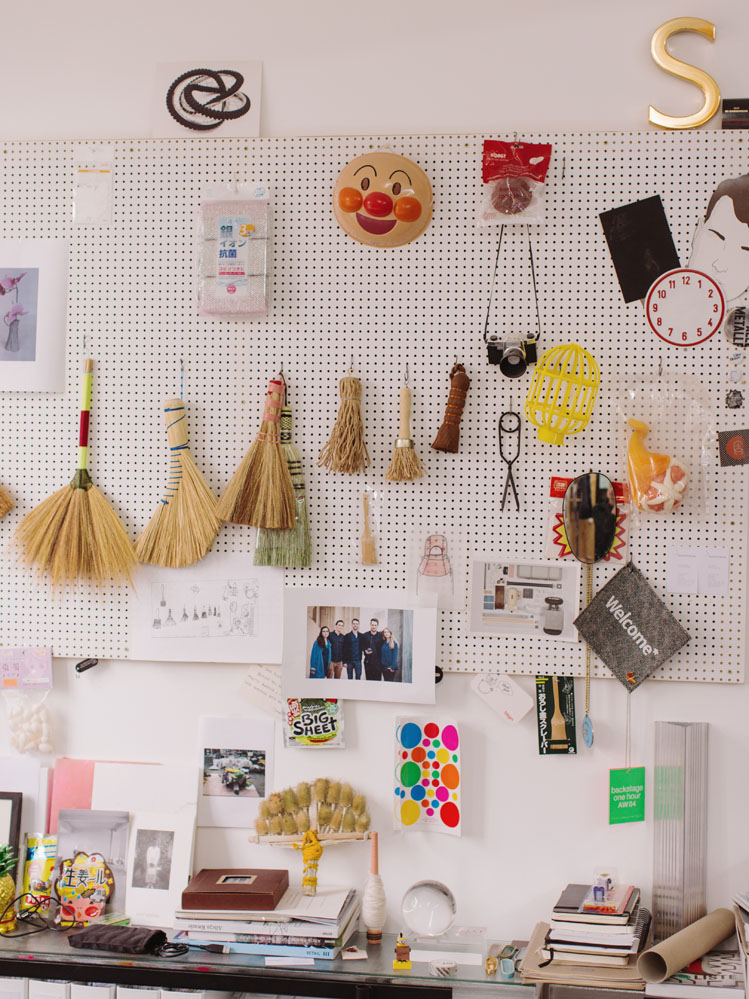 An office mood board bears tchotchkes and souvenirs the designer picked up on his travels. 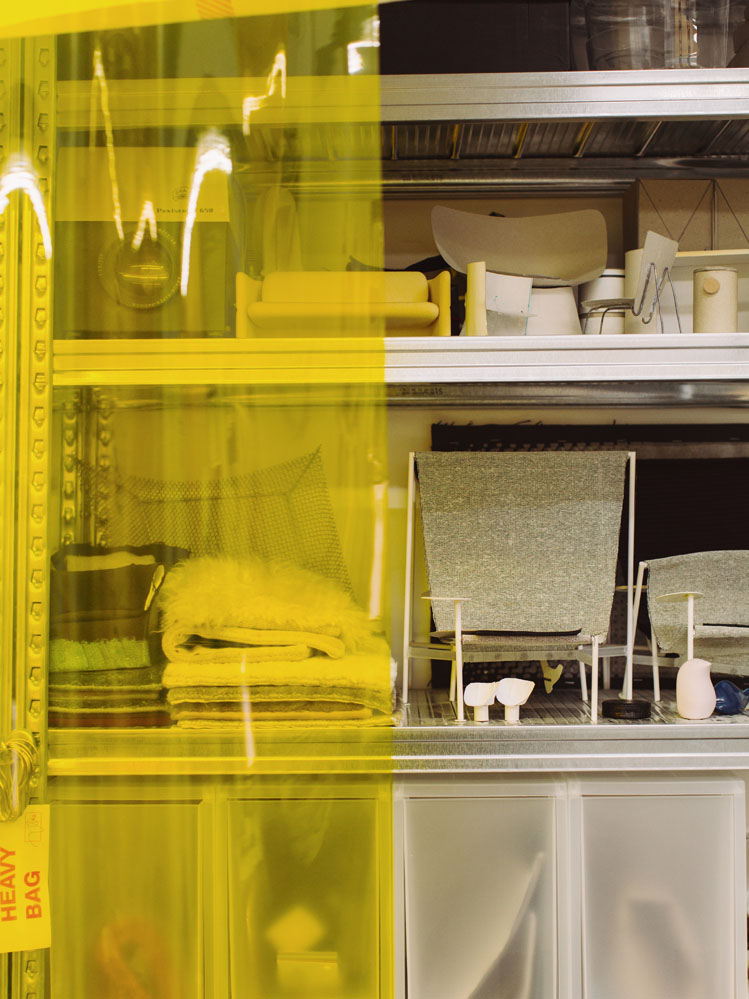