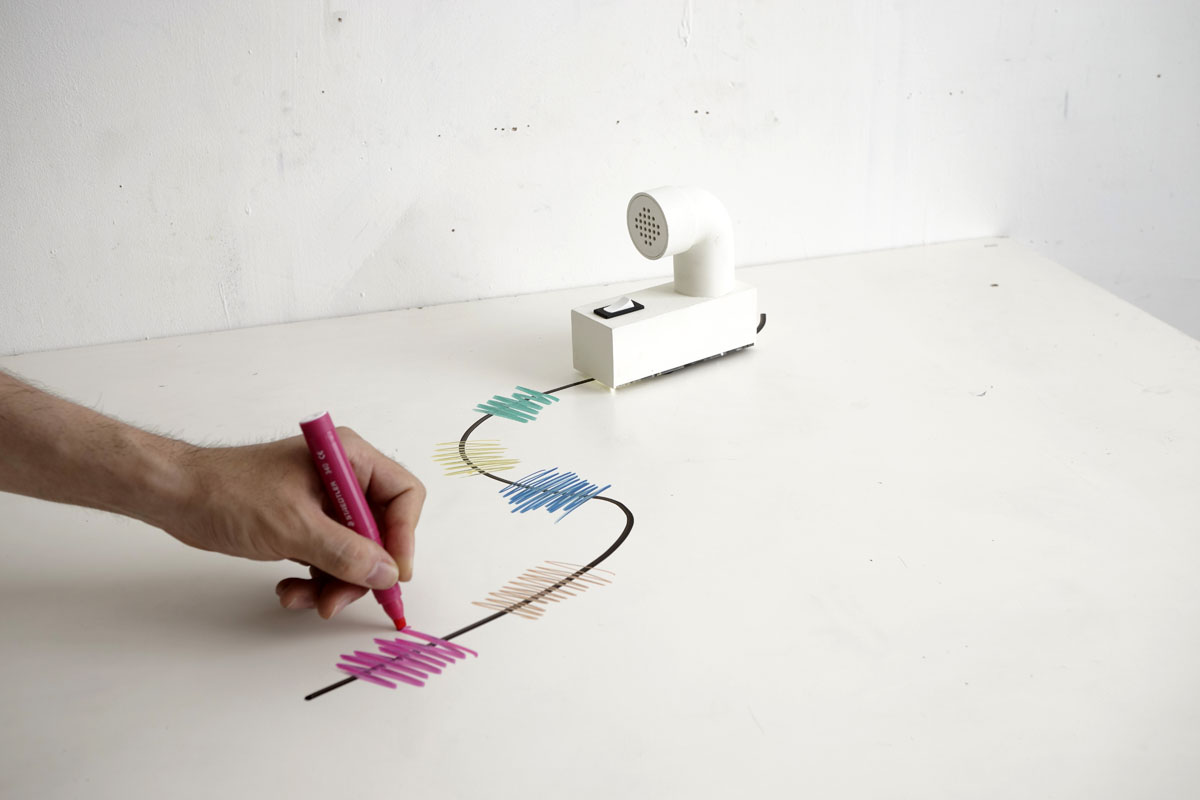 For Looks Like Music, Suzuki designed a suite of music-playing robots (“basscar,” “glitchcar,” “melodycar,” “arpeggiocar,” and “drumcar”) and programmed them to run along a winding path. When the cars came across a bar of color, they emitted a harsh or pleasing sound corresponding to their typology. Participants could mix colors—producing incongruous or complementary notes—by drawing directly on the museum floor.

As a sound artist, designer, musician, and sometimes DJ, Yuri Suzuki, 34, wants no less than to change the way we hear the world. Through invented musical instruments, sound installations, and remixes, his challenging yet playful body of work warps all notions of how people interact with music and sound.

“Design is usually focused on vision. But psychologically, music is stronger,” says Suzuki. His expanding list of collaborators and clients, such as the music group OK Go and DJ-producer Jeff Mills, affirm this intuition. They have all recently turned to Suzuki for his novel approach to sound and technology.

Though his projects traverse the territories of hip-hop, techno, and pop, Suzuki’s own musical tastes favor the avant-garde. His predisposition toward the experimental, which Suzuki traces back to his music-filled childhood, ultimately led him to the Japanese collective Maywa Denki, a self-proclaimed “art unit” famous for its idiosyncratic live performances and Rube Goldberg–like instruments. After six years with the band, Suzuki moved to London, where he still lives, to study design at the Royal College of Art. Upon graduating, he opened a studio in London and just last year started his own R&D consultancy, Yuri Suzuki Creative Lab. 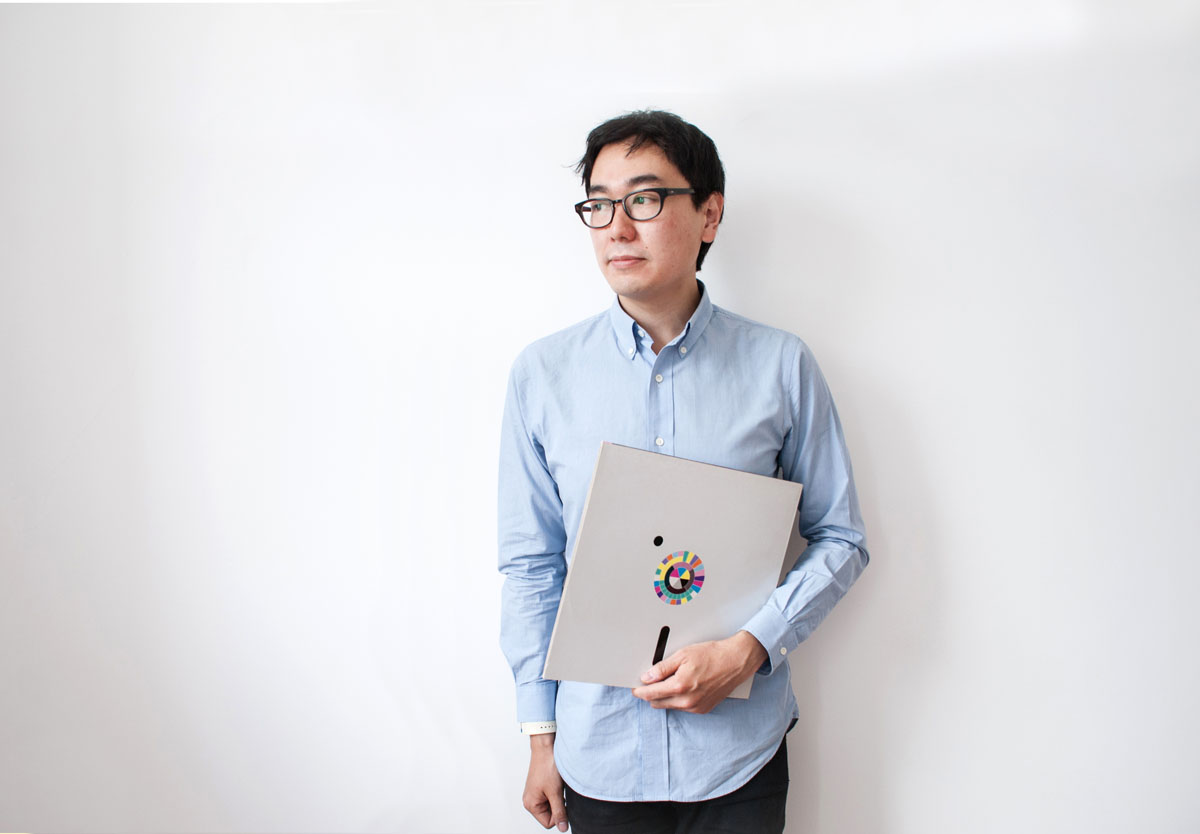 A portrait of the designer and musician Yuri Suzuki, who is known for his playful experiments with sound.

The lab takes the jabberwocky ethos of Maywa Denki and polishes it with the veneer of concept art. The Pyramidi, designed with the musician and producer will.i.am, consists of a series of mechanical, gold-plated instruments that are playable via MIDI. Installed at the Barbican this spring, Suzuki’s novel instruments were encased in three glass pyramids and set against a giant digital pharaoh. For Mudam Luxembourg, Suzuki designed Looks Like Music (2013), an interactive installation of miniature robot “cars” programmed to travel along winding black lines drawn on paper. As the cars passed over crosshatches of color, they emitted different notes and sound samples to make music.

This kind of improvisatory composition process—syncopated blips and whirs activated by visitors marking up the gallery floor with color markers—is analogous to DJing. For Suzuki, DJing is about communicating and responding to an audience. “I’m interested in this as a process. I’m really interested in how music affects behavior and emotion.” His recent project Sound Taxi expands on this influence. Commissioned by AiAiAi, a Danish audio-design company, the taxi records the ambient noise of the city to create music through a digital interface in real time, while “playing” the city back to people on the street through 67 speakers built into the body of the car.

Currently, Suzuki is busy with OTOTO, an arts and sound project that developed from a previous collaboration with interaction designer and creative technologist Mark McKeague. His Japan-based exhibition Unseen Daily Life, Part 1 was recently at Tokyo Wonder Site, and next year he will develop a sound installation as part of a design biennale in Saint-Etienne, France. He is also working with DJ-producer Jeff Mills to design the interface for a drum machine. “Collaborating with musicians is great because they are full of ideas,” Suzuki says. “Björk is someone I’d really like to work with because she’s interested in new sounds and instruments.” Are you listening, Björk? 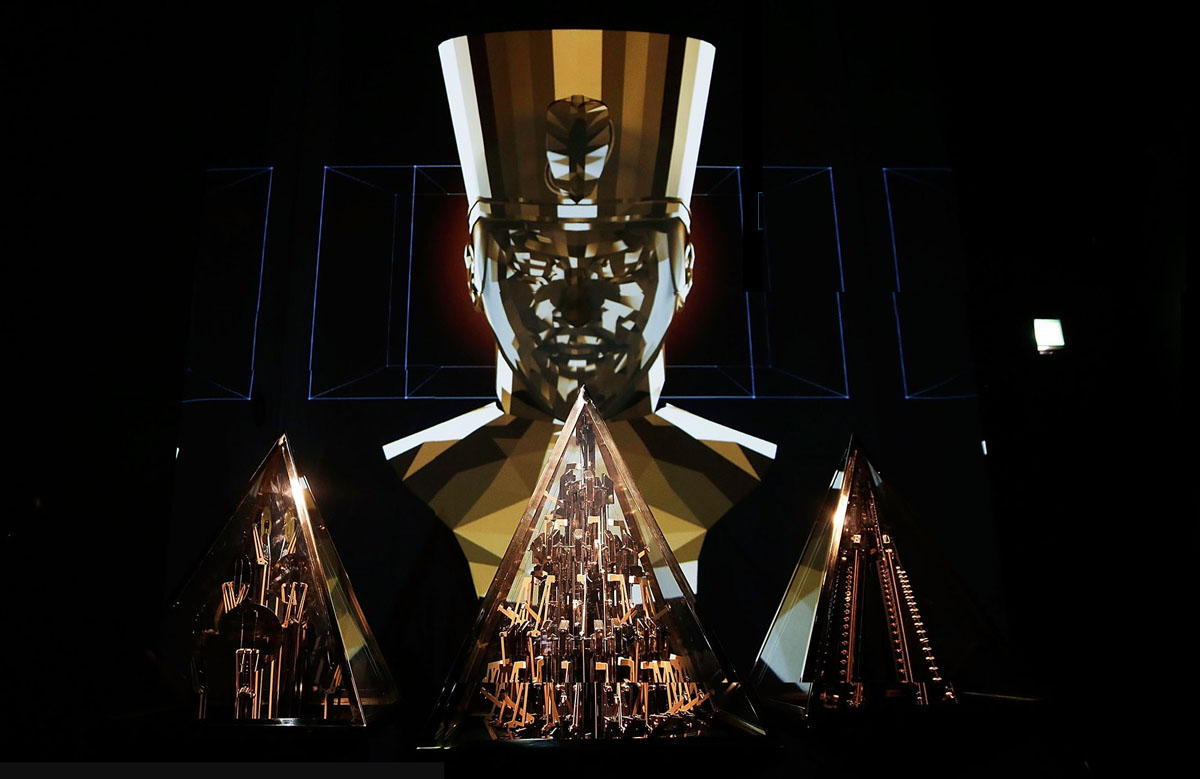 The Pyramidi (2014) was produced in collaboration with will.i.am for the Barbican’s recent Digital Revolution exhibition. Suzuki’s robotic instruments were sequenced to play the notes of an original song, written by will.i.am exclusively for the light-and-sound piece.

“I had heard about Yuri Suzuki from a friend, so I went to see his exhibition in Tokyo. I thought his work was interesting because it doesn’t make sense. Then I was told that he had had reading challenges since early childhood. He accepted himself, and instead pursued the senses, such as touch and hearing, where he showed strength and ability—and in so doing, found his calling and his work. I expect him to create many interesting and useful things in the future.” —Issey Miyake, fashion designer and a director of the 21_21 Design Sight center