A One Tonne Life

From the advice I was raised on, I’m going to assume that “eat right,” “turn off the lights when you leave a room,” “only do a full load of laundry,” and “how in the world do you spend so much money on gas in a month?!” are among the most often used phrases of […]

From the advice I was raised on, I’m going to assume that “eat right,” “turn off the lights when you leave a room,” “only do a full load of laundry,” and “how in the world do you spend so much money on gas in a month?!” are among the most often used phrases of any parent to their teenaged child. For the Lindell family of Hasselby outside of Stockholm, that advice not only worked on their 16 year old daughter, Hannah, but walked right into the center of the family home in the shape of a newspaper advertisement looking for test subjects.

Enter the One Tonne Life project. For the next six months, the four-person Lindell family, made up of parents Nils and Alicja, and Hannah and Jonathan, 13, will live in a state-of-the-art, climate-smart villa by A-hus and trade in their two gas-powered vehicles for a battery-powered Volvo C30 Electric. Although they get the perks of science at its environmentally-friendly best, the point of the One Tonne Life project is to show that the everyday nuclear family, with a relative understanding of sustainability, can lower its carbon footprint from 7.29 tons a year to a manageable 1 ton. The project’s webpage, onetonnelife.com, asks: “Is it possible to live carbon neutral today?… With energy-smart housing, electric cars and clean energy, we could go on living almost as usual. Couldn’t we? What does it really take for a family to live carbon neutral?” 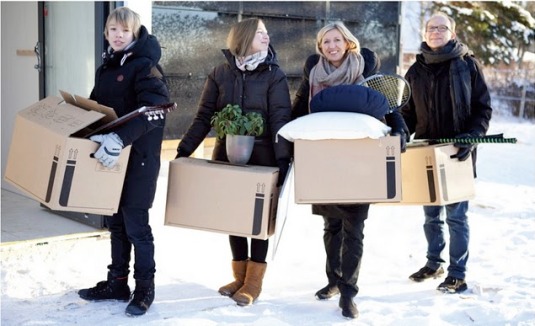 In America we talk about living sustainably, but many of us don’t know how to go about it, or don’t want to change our ways, or are just plain lazy. But what if we could make some small changes? Perhaps the new Volvo C30 Electric is out of our price range, but what about changes that can actually add to our wallets? Kerstin Lindvall from the food and sustainability ICA was brought in by the One Tonne Life project to advise the Lindells on potential changes to their diet that will aid in lowering their carbon footprint. As Lindvall points out in the project’s kick-off video on their webpage, a fourth of a person’s carbon footprint comes from food, and 25-30% of what we buy from the grocery store will eventually end up in the trash. 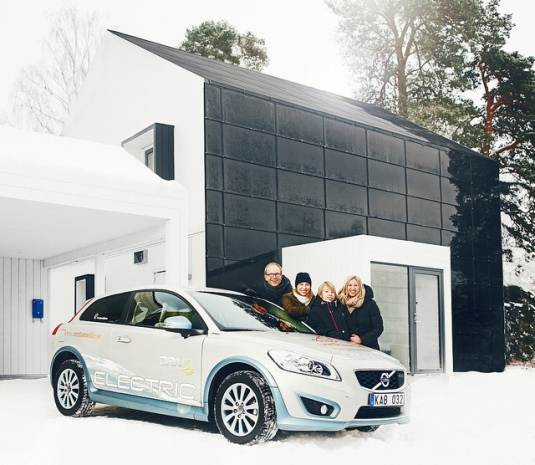 The wonderful thing about the project is that the Lindell family isn’t particularly different from any other. When Hannah brought in the advertisement, they weren’t the modern-day environmental heroes they’re striving to become. They were just a nuclear family, living the way such families live, willing to accept the challenge of what a family can do to move towards carbon-neutrality. Highlighting the fact that they are an everyday average family is this paragraph from Mrs. Lindell’s biography:

How do you feel about all that has been written about the climate problem?

“I’ve been influenced but I’ve pushed it out of sight. I guess I thought ‘this won’t happen to me, it’s other people who are affected’. I’m pretty sure that’s a common defense mechanism among many people, we tend not to make the connection. But it feels now as though more and more people are getting involved in the climate issue, we’re well on the way towards change. I’d like to contribute to the solution, in whatever little way I can. I feel that if every single individual did his or her little bit, we’ll move in the right direction.”

I’m not big on reality TV shows, but I’m interested in seeing how this one works out for the Lindells and what changes I can make in my own life to help us all “most in the right direction”. Perhaps with a message as important as the One Tonne Life project’s, reality enthusiasts everywhere will tune in and begin to see how their own lives can be changed subtly. Sadly, that probably won’t happen–at least not without a particularly drama-filled season finale. But really, what could be more drama-filled than the calamity Mother Earth is spinning towards?