In our January 2011 issue, we featured just a few of the works included in Postcards of the Wiener Werkstätte, a recent exhibition at the Neue Galerie of about 500 postcards from the Leonard A. Lauder collection. If you missed the show, which closed a few days ago, take heart: the curator Christian Witt-Dörring has […]

In our January 2011 issue, we featured just a few of the works included in Postcards of the Wiener Werkstätte, a recent exhibition at the Neue Galerie of about 500 postcards from the Leonard A. Lauder collection. If you missed the show, which closed a few days ago, take heart: the curator Christian Witt-Dörring has edited the museum’s visual feast down to a digestible bite of six postcards. Here he presents his personal favorites and explains what makes them special.

The topic of this postcard is the unspectacular or, to put it another way, the familiar. It tries to capture the atmosphere of the fast disappearing old city of Vienna around 1910. Nostalgia embraces contemporary artistic expression—the ambiguous play between the flat plane and a perspective rendering. The image breathes tradition in the Secessionists’ interpretation of the term as a revival of a lost quality. 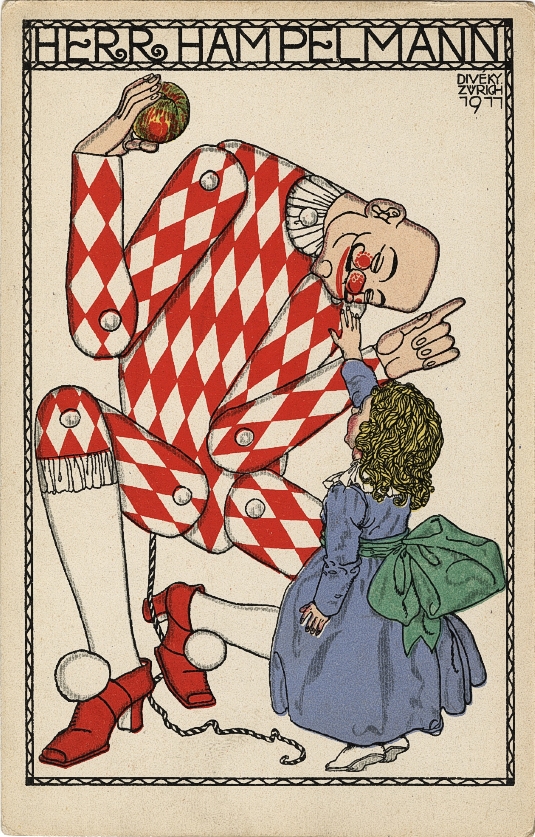 A children’s topic, the Jumping Jack, seems transferred into the adult world. The often violent and scary content of fairy tales is placed on view. The oversized Jumping Jack, on the verge of breaking the decorative frame, is in stark contrast to the vulnerable innocence of the little girl with its grimacelike smile and pointing finger. While the aesthetics of the image are pleasing, the narrative of the image itself is disturbing, creating a tension that forces the viewer to dwell on the subject of the postcard. 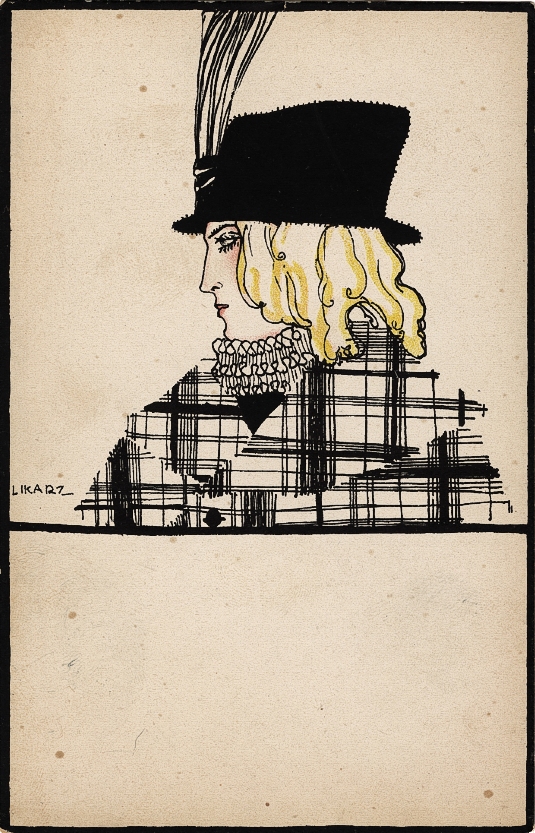 A multitude of Wiener Werkstätte fashion-related postcards promoted its fashion and hat salon, founded in 1910/11. One of this particular postcard’s qualities, however, is its resistance toward being entirely purpose-oriented. It can stand on its own as an independent artistic creation, as well as act as an advertisement for the Wiener Werkstätte fashion department. It is all about a very specific sensibility that removes one from an everyday routine and opens a window onto an unexpected aesthetic world of vulnerability. The rigid black framing emphasizes the fragility of the image, which shifts between abstraction and figuration. The minimal use of color in connection with the dominant black reinforces this ambiguity. 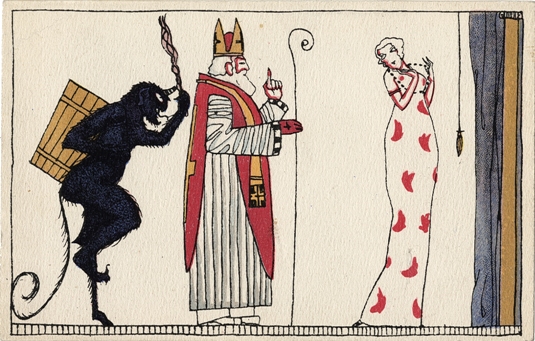 This greeting card celebrates the feast of St. Nicholas, the fourth-century bishop of Myra (Turkey) and, later, the model for Santa Claus. It is the tradition in the whole of Central Europe that St. Nicholas rewards good children with gifts, while the accompanying figure of Krampus, a demonlike being, punishes the bad children on the evening of December 6th. The image takes the subject out of its original religious context and transfers it into the profane world. The contact persons for St. Nicholas and the Krampus are no longer children but an adult woman. The protagonists are positioned on a stage with a curtain drawn back for the occasion of the yearly occurrence of the feast. A few lines with bold patches of color create a delicate balance between a static and mobile sensation. 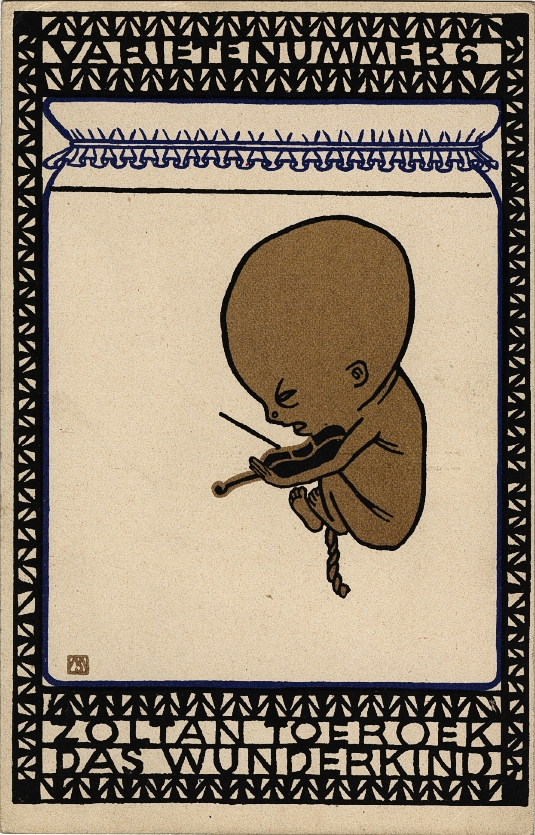 This postcard is part of a series of cards with imaginary vaudeville acts as subjects. The series is fueled by black humor and must be seen in the context of the newly inaugurated “Cabaret Fledermaus,” which was conceived and realized as a total work of art by the architect and designer Josef Hoffmann and executed by the Wiener Werkstätte. The extraordinary visual impact of the card stems from the intense contrast between the strong black decorative frame, which incorporates the explanatory title of the image, and the rather empty middle section of the card. The latter is completely filled with a mason jar in which a violin-playing fetus is floating. By using only three colors (black, blue, and brown) and giving the figure of the fetus plenty of surrounding white space, the artist emphasizes the provocative impact of its image. The technique of contour drawing in connection with a flattened perspective heightens this further. 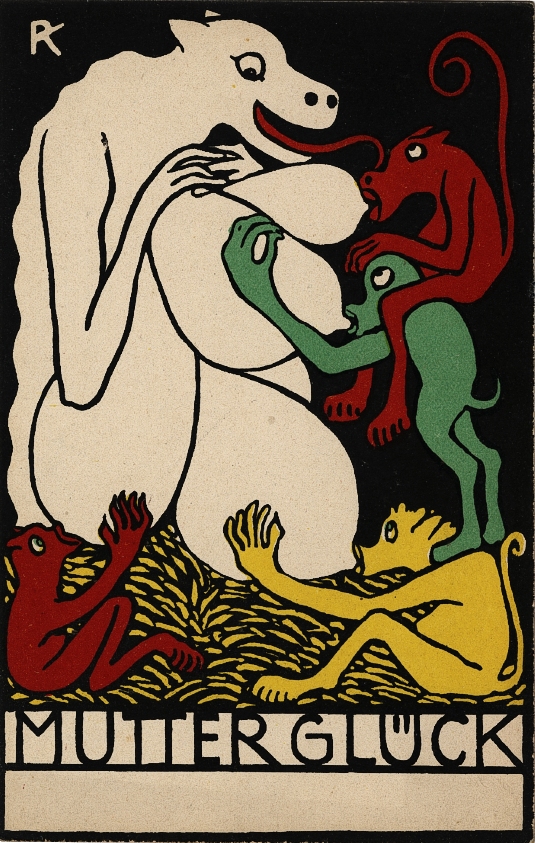 Since the concept of Mother’s Day as a yearly celebration did not yet exist when this card was designed, its sole purpose might have been to amuse the recipient. Image and title form a unity as regards content, for without the title “Joys of Motherhood” the image would just be bizarre. The energy of the subject and near-expressionist quality of the drawing almost seems to burst the boundary of the postcard. Kalvach’s choice of color is an integral part of getting his message through. The big white static image of the mother contrasts with the aggressively sucking little beasts in red, green, and yellow patches.