A School on Stilts

Image courtesy World Monuments Fund. The Phyllis Wheatley Elementary School in New Orleans looks like no other school anywhere else. Designed and built in 1955 by the architect Charles Colbert specifically for the historic African-American neighborhood of Tremé/Lafitte, the now-decrepit modernist glass box appears to float above the ground. Colbert managed to set back the […]

The Phyllis Wheatley Elementary School in New Orleans looks like no other school anywhere else. Designed and built in 1955 by the architect Charles Colbert specifically for the historic African-American neighborhood of Tremé/Lafitte, the now-decrepit modernist glass box appears to float above the ground. Colbert managed to set back the columns needed to hold the building above flooding levels, creating dramatically cantilevered class rooms and an empty common area for the kids underneath. Huge windows let in plenty of sunlight, and kept the building surprisingly cool in hot and humid New Orleans. The building was celebrated for these features at the time, but fifty years of neglect and a hurricane have taken their toll. In July last year, the Recovery School District (RSD)—which works to rehabilitate underperforming schools in Louisiana—finally decided to tear the dysfunctional building down, and build a new school in its place by 2013.

A Plea For Modernism from Evan Mather on Vimeo.

The non-profit preservation group DOCOMOMO is up in arms against the move to demolish Phyllis Wheatley. The film above, made by Hand Crafted Films, presents their compelling argument for choosing adaptive re-use over demolition. For one, Phyllis Wheatley will soon be the only standing representative of 30 schools built in New Orleans during a wave of progressive modern architecture in the 1950s—destroying it will wipe out a significant period in local architectural history. In a neighborhood filled with Creole cottages, the school is undoubtedly an architectural landmark, but the students who studied there also formed a deep bond with their alma mater (in the film, alumna and actress Phyllis Montana-Leblanc touchingly insists on referring to the building as “she.”) The school’s passive ventilation and ability to weather floods make it a fine example of regional modernism, and show the potential for transforming it into a sustainable 21st century school. 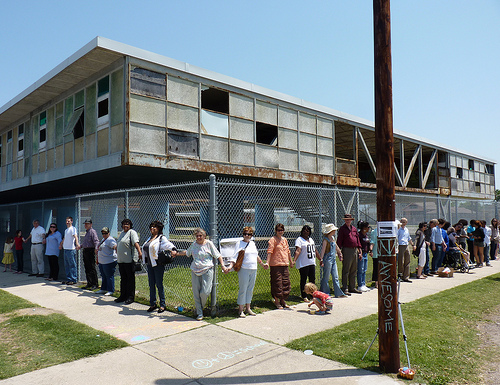 But the RSD’s decision wasn’t taken in a vacuum, of course. The first call to demolish Phyllis Wheatley was actually sounded way back in 2008, as part of a master plan created by the RSD with the Orleans Parish School Board and the planning consultants Concordia. Over 200 community meetings went into that plan. The RSD then commissioned a feasibility study which also recommended demolition, and a further five community meetings were held in the neighborhood of Tremé/Lafitte. Unfortunately, it appears the neighbors weren’t as enamored of their modernist icon. At a New Orleans Historic District Landmarks Commission (HDLC) hearing held on March 18, community members —including a teacher and the grandmother of a student—explained that the architecture had stopped working for them. The large windows actually let in too much sunlight, and years of neglect had made them unsafe. The cafeteria had no ventilation. But of all the things said at that HDLC hearing, the most illuminating was a complaint from Lona Edwards Hankins of the RSD:

“In 2008, when the Master Plan was announced, we met with DOCOMOMO and they said they were going to bring resources to bear to help us figure this out and that never came.  So we had to come up with funds out of our pocket to spend money on the feasibility study because the challenge we had at that time was, if we spent money to study this, then that’s a roof I can’t replace on an active building.  We didn’t have any of the funds.  So the time has passed, as far as I’m concerned.  My concern is about buildings for children to get them off the buses and reduce our operating costs.  So, I don’t believe we can delay this process anymore.” 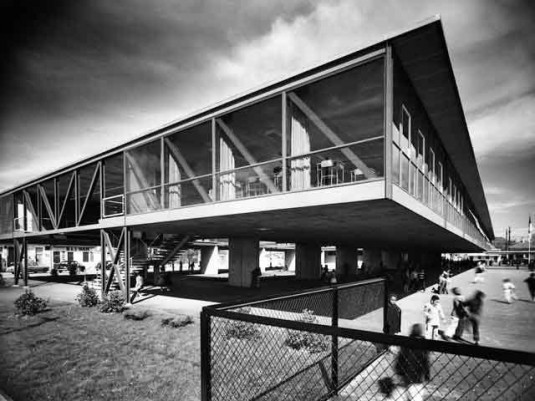 This is ultimately a story of neglect. Phyllis Wheatley’s windows once had shades and curtains (visible in the image above), so teachers could decide how much sunlight to let in. We can imagine how as budgets shrank, the curtains went first, then the windows grew grimy and maybe a couple of them cracked. The teachers didn’t like teaching there anymore, the kids weren’t happy either. The community and the school district began seeing the school as it is today, not as it could be. The preservationists who could have told them otherwise didn’t get involved until it was too late. And even then, they seemed to be seeing the building just as an architectural masterpiece, when the school was also a vital cog in the urban machine that had to be fixed speedily. This is a cycle of events we have seen before, with other modern buildings facing demolition. The tragedy of Paul Rudolph’s Riverview High School in Sarasota County comes most readily to mind. Preservation efforts ultimately failed to change the school board’s mind, and the masterpiece was razed to the ground—a fate that Phyllis Wheatley can hopefully still avoid.

What made Charles Colbert’s school such a success when it was built—and why it should be saved now—was that Colbert worked with local context while still seeing a vision of the future. That’s a lesson both sides of this preservation battle could learn from. DOCOMOMO sees a better fate for this school; they needed to engage earlier in the process with people on the ground, and change their minds. The RSD’s decision to demolish the school is the most practical solution, but it also seems like they gave up on a local icon without really acknowledging that the building might have the strength to weather the storm. Phyllis Wheatley Elementary School deserves to stand because it embodied a combination of pragmatism and hope, and we could use some of both now.

For more on historic preservation and modernist school buildings, we untangled the story of Paul Rudolph’s Riverview High School in our film, Site Specific: The Legacy of Regional Modernism.