A Vote for Change

The Storefront for Art and Architecture took on old Washington. Now it’s your turn…

The March 2008 issue of Architectural Digest features a crisp photo of the White House on its cover with a red and blue headline announcing an exclusive tour of the rooms updated by Laura Bush. The article says that the White House is “more than four walls and a roof. It is a symbol. ” Laura redecorated several interior spaces with the help of her favorite designer, Fort Worth’s Kenneth Blasingame. There’s a new cream color for the walls of the first floor library! New floral drapery valances! Ecru paint in the Vermeil Room!

If the Storefront for Art and Architecture had its way, the renovation would be a bit more extreme.

In January, the Storefront for Art and Architecture and Control Group announced a design competition to rethink the great architectural symbol of U.S. Political power. 850 participants from 42 countries submitted entires in the White House Redux competition. A panel including (among others) Geoff Manaugh of BLDG BLOG , John Maeda, President Elect of the Rhode Island School of Design, and architect Liz Diller, met in New York in May to analyze some 5,000 boards. They announced their shortlist of winners last week and now it’s your turn: Storefront wants you to vote for your favorite design. You’ve got until November 8 to make your choice. The winner of this popular vote will earn cold hard cash.

If you need more than the Web to make your choice, stop by the Storefront for Art and Architecture tomorrow evening when it opens its doors following an extensive restoration to its facade on Kenmare Street (created in 1993 by artist Vito Acconci and architect Steven Holl). There will be an exhibition of 150 of the design ideas from the White House Redux submission. The panelists will be on hand to present the winners with awards. And there’s a limited edition book that you can pre-order online and pick up at the opening. 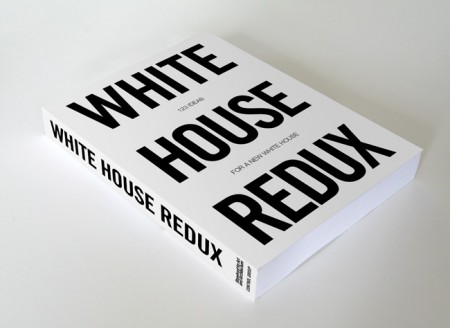