Trawler jig, Silvertown Ship Breaking Yard, by Jonathan Schofield. It’s brilliant, even breath-taking at times – the current exhibition of the best students’ work at the Royal Institute of British Architects in London. RIBA, the self-proclaimed “oldest and most influential architectural institution in the world,” has been awarding its President’s Medals, commendations, and cash to […]

It’s brilliant, even breath-taking at times – the current exhibition of the best students’ work at the Royal Institute of British Architects in London. RIBA, the self-proclaimed “oldest and most influential architectural institution in the world,” has been awarding its President’s Medals, commendations, and cash to the most talented students since the 1850s. Can there have been a more impressive year than the one just past?

As a recently graduated architecture student myself, I came away from the exhibition with one overriding feeling: awe. Portfolios are also on shown this year, so you can see just how much quality work a student has produced, sometimes in just one semester.  As if that were not enough, silver medal winner Jonathan Schofield from the University of Westminster has also made a highly atmospheric video for his project for a ship breaking yard, the success of which suggests that short films will become an increasing feature of President’s Medal shows.

I also came away with a feeling of dissatisfaction. Why? None of the students accompanied their often beautiful works with a description of how they produced them – the sort of information that would be useful to others operating on a lower plane of production at the moment. In fact, I found only one piece of work that told me which media were used – a great pencil and ink drawing by Kirsty Williams from University College London for her Omani Institute of Botanical Medicine. Every piece of work exhibited in an art gallery is accompanied by this kind of basic information, so why not here? 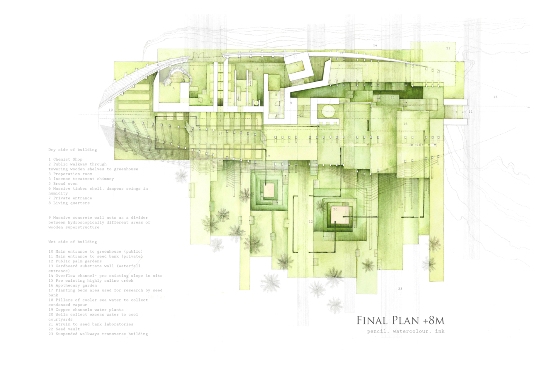 Of course, one can often guess the means by which a work was realised – Photoshop and programs such as 3DMax and Autocad are obviously still popular – but why are students so secretive in that regard? Do they have qualms about sharing their methods with other students because they are potential competitors for jobs in good practices? The tutors, usually coming from a generation when hand drawing  dominated, might have no idea how their students produce their work either. These days, tutors are less guides on how to do things, instead they are motivators and arbiters of the success of drawings, models, and the overall design. 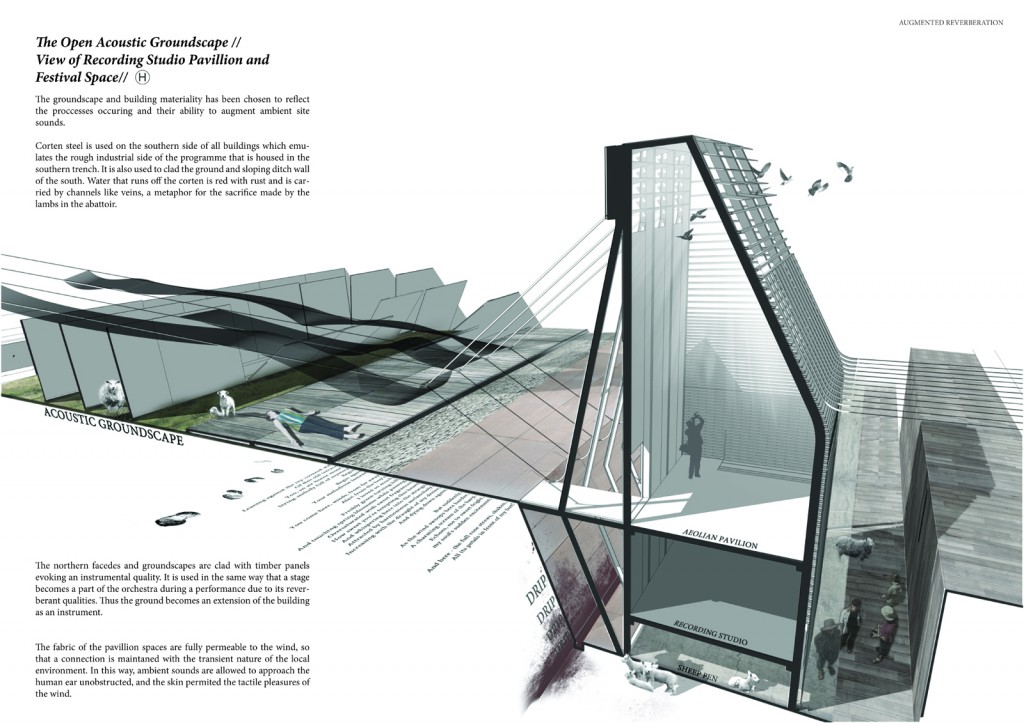 Another confusion arises.  Too much built work, in Britain at least, lacks the ambition and adventure that are a marvellous feature of the President’s Medals exhibition. See how William Gowland from the University of Nottingham takes the rather mundane brief for a gut-string factory on the Isle of Sheppey and turns it into an instrument played by the winds of a desolate landscape (above).  And observe how Jonathan Schofield, seemingly inspired by The War of the Worlds and old Fiat adverts, offers a new vision of regeneration in Silvertown dockyard in London, dismantling and reshaping decommissioned ships in a robotic ballet controlled by the local community. True, the students were their own clients, and did not have to contend with unhelpful planners or stick-in-the-mud neighbors, but why do the exciting visions of architecture school graduates rarely survive into practice? 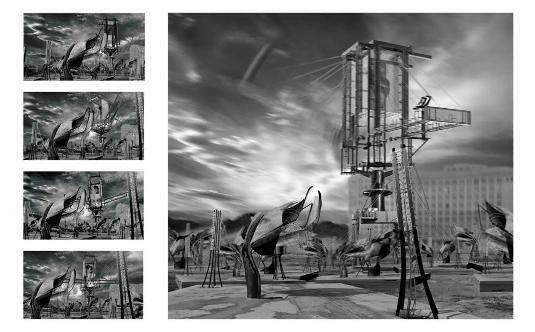 In viewing the work, you can imagine the number of harsh crits, revisions, and blind alleys that had to be gone through before reaching the final designs, but from the micro-level of the building technology to the wider context of the existing environment, the detail is impressive. 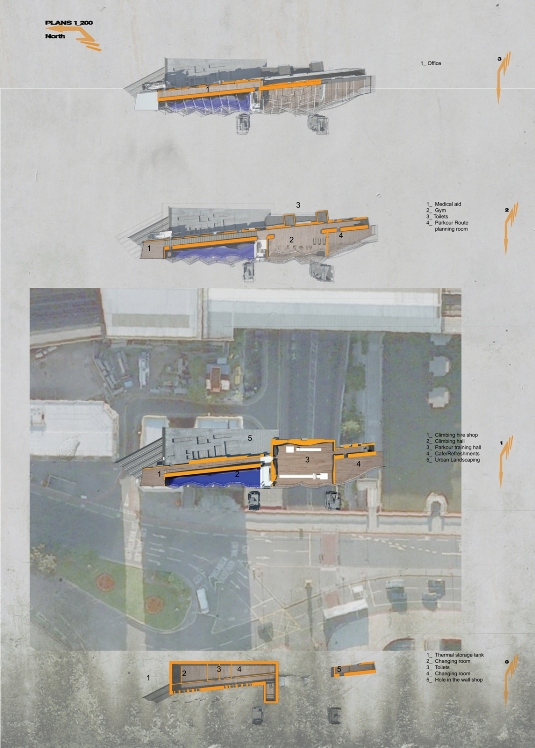 Contenders from universities throughout the UK and further afield are exhibited alongside the prize winners.  Some of these are worth attention:  London South Bank University’s Albert Zheng Suen’s Jump-London project is especially interesting for its use of orange in the 1:20 section, and Bath University’s Samantha Rive’s city monastery, whose engagement with how light falls through the building and how that interacts with the streets of Bath is quite moving. Such paeans to obsession are a feature of the most successful presentations. Another example is the perspective of a cooking school by bronze medal winner Jack Hudspith of the Mackintosh School of Architecture in Glasgow. 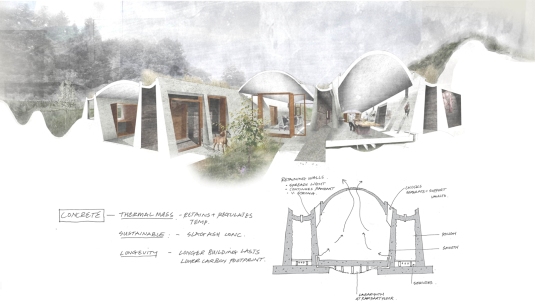 The paradox remains. Britain’s built environment is so controlled by conservative forces that world-renowned architects like Zaha Hadid and David Chipperfield lament the lack of opportunity to build in their home country, yet UK architecture schools continue to be a Mecca for foreign students and to produce graduates of outstanding quality. Who better than the students who exhibit at the President’s Medals show to change that situation?

The RIBA exhibition can be seen at http://www.presidentsmedals.com/winners_list.aspx?year=2010. to appreciate the variety of ideas that inspired these projects.

Tony Minichiello graduated from London South Bank University in 2010 with a BA Honors Architecture and he’s a prize winner in the 2007 RHWL Architects Writing Competition. In addition to architecture, he writes about music and political affairs.