An amazing roster of speakers with designs on inspiration

“In order to be really secure, we’re going to need to be secure in change.” With that mobilizing statement, a quote from his grandfather, Charles Eames, keynote speaker Eames Demetrios set the tone for Compostmodern ’09, last weekend’s day-long conference on sustainable design at San Francisco’s Herbst Theatre. And the day’s speakers did, indeed, advocate for change at all levels: changes in the way designers work, the way they think, what they design, and for whom (“Your client is the planet” became another reigning mantra), even how we conceive of sustainability itself.

Perhaps fittingly, one of the most compelling presentations came from the youngest participant, Emily Pilloton (“Did I mention she’s 27?” emcee Joel Makower asked more than once, as he rattled off Pilloton’s achievements). Pilloton toiled as a designer of $1,800 chairs for only a few years before deciding to direct her industrial design education toward the greater good. She founded the nonprofit Project H (for humanity, habitats, health and happiness) just over a year ago and, working with chapters internationally, has already carried out a wealth of innovative projects that directly impact people’s lives. The organization helped redesign the Hippo Roller, a successful vessel for transporting water in developing nations, so that they can be more efficiently shipped (and, as a result, more can be distributed and put into use). 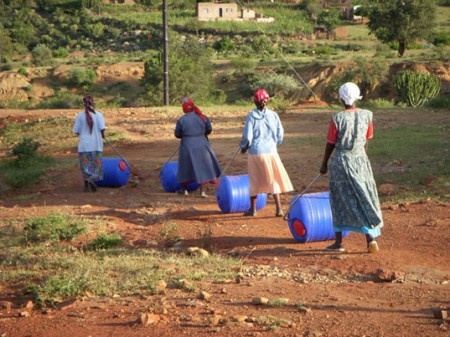 Pilloton and her crew also designed a simple but revolutionary “Learning Landscape,” a reclaimed-tire-and-sandlot environment that can be used for math games. Originally designed for a school in Uganda where students sat in a dark, cramped schoolhouse all day long, Project H is now bringing versions of the system to sites in the Netherlands and the U.S. And they’ve worked with residents of a homeless shelter in Los Angeles to create simply constructed products that the residents can make and sell, as well as with a foster care agency in Austin to redesign their frighteningly antiseptic Quiet Rooms. But Pilloton was not content simply to inspire. She also issued a forceful wake-up call for anyone who gets too self-righteous about being “green.” 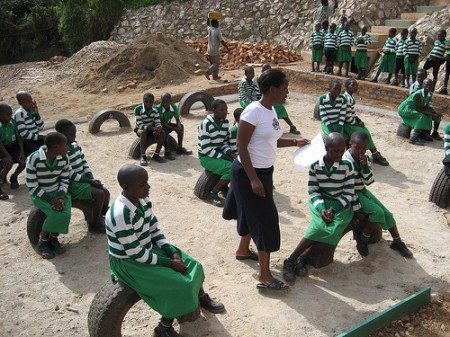 The Hippo Roller could be taken to task because it’s made out of plastic, she noted. “It’s honestly the only material that works for this,” she concluded, noting that durability is essential. The benefits, however, outweigh this potential transgression: Not only does the Hippo Roller aid in water transport, its large size necessitates fewer trips to the water source. And so, the women responsible for retrieving water now have more time to devote to education or starting a micro-business. Think of sustainability in terms of human and social impacts, Pilloton urged. “We get really immersed and engulfed in environmental sustainability,” she said. “I think we need to take a step back and think about what we’re designing.”

Pam Dorr’s conversion to the humanitarian side of design may have been longer coming, but her story was no less inspiring. A former designer for the Gap and Victoria’s Secret, Dorr took a one-year fellowship with Auburn University’s Rural Studio in 2001, then never left. Instead, she founded Hale Empowerment and Revitalization Organization (HERO), an organization that builds affordable homes and helps residents of impoverished Hale County, Alabama purchase and learn how to maintain them. Dorr’s lack of experience in the housing field proved to be an immense asset in her role. Unaware that building a house for $20,000 (the amount of the federal loans for which many Hale County residents qualify) was “impossible,” Dorr worked with Auburn students and nonprofit groups to find a way to do just that. Several Hale County residents have now moved into their uniquely designed homes, made largely from salvaged materials. The resourcefulness of the students working with Dorr and her co-presenter, graphic designer John Bielenberg, who brings a group of students to work with Dorr each summer, was stirring, as well. A wall made out of drumstick blanks acquired from a defunct drum manufacturer? Brilliant!

Dorr and Bielenberg’s presentation underscored another important point about sustainability – when you’ve got no money, there’s no choice but to beg, borrow, reclaim, reuse. As Bielenberg and others pointed out often, constraints can yield incredible creativity. An excellent point that also brings me to my one beef not so much with the conference but with the discussion around sustainable design in general: For all the great advice on designing sustainably, what about living sustainably, regardless of income level? The idea of “heirloom” products that will last a lifetime, or at least more than a couple years, is a wonderful one. But the idea of accumulating less stuff is even better.

“You don’t need a sustainability MBA to start doing this,” Nathan Shedroff, Design MBA chair at California College of the Arts (and recipient of a sustainability MBA) reminded the audience as the conference came to a close. “You can look at these resources and start doing this Monday, or even tonight.” Shedroff was referring to the ideas presented at the conference, but I would add: We can all start living these ideas even sooner. We’ve functioned perfectly fine without astronomy widgets at our fingertips for a very long time. Designers, tastemakers that they are, might be the best group to show us how to continue to do so long into the future.