The facade of Raleigh’s new convention center is an eye-catching addition to the city’s skyline.

Raleigh, N.C., has had a checkered history when it comes to public art. Its most recent setback came in 2006, when the city council scotched plans for a work by Spanish artist Jaume Plensa that would have graced a plaza on the city’s central axis, Fayetteville Street.

A redemptive moment is at hand, however, as the city prepares to open a $221 million convention center near the Plensa-cleansed plaza.

Architects TVS & Associates of Atlanta, O’Brien/Atkins Associates of Research Triangle Park and Clearscapes of Raleigh reduced the center’s profile, sinking its exhibition hall below grade, and quoted aspects of regional architecture, both formal and vernacular. But there’s no minimizing its Cree Shimmer Wall.
Masking the 500,000-square-foot building’s boilers, chillers and cooling towers is a 211-feet-by-44-feet screen depicting an oak tree, the city’s symbol. Nearly 80,000 four-inch-square aluminum panels flutter in the wind, in tides that create the namesake shimmer.

“It literally is a louver,” says Clearscapes principal, architect Steven Schuster. His business partner, sculptor Thomas Sayre, worked with artist Ned Kahn, who had created similar walls elsewhere. Raleigh’s Shimmer Wall is unique in that it has a representational image, and that it will be backlit at night. Cree, Inc., of nearby Durham, donated $1 million to the project—which no doubt helped create the LED system that will illuminate the Cree Shimmer Wall in a variety of colors. 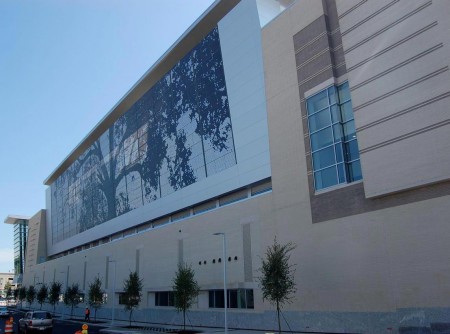 An even closer view of the Wall’s panels at work.