The jury is in: Behnisch Architekten wins an international design competition for a new law school in Maryland.

Rendering of the proposed John and Frances Angelos Law Center at the University at Baltimore designed by Behnisch Architekten. Image courtesy of UB.

The University of Baltimore’s current School of Law building sits on the edge of the city’s bustling Mount Vernon neighborhood and at the heart of the school’s campus. Built in the 1980’s, the squat structure looks its age. “The building is set up in an old way,” says Steve Cassard, UB’s vice president for Facilities Management and Capital Planning. Classrooms are small, there is limited public space, and the law library is bursting at the seams. “The pedagogy of legal education is changing. Fostering interaction is important.”

This year, UB—now the 6th largest public law school in the country—launched an international design competition for a new $107 million law school, with funding for the competition provided by Baltimore-based Abell Foundation.The site of the future 190,000-square-foot law school is a coveted corner lot on a highly visible corridor; it can be seen from the city’s busy Pennsylvania Station, home to Amtrak, and from a major north-south highway. “It’s an opportunity for progressive architecture that reflects forward thinking,” Cassard says.

On November 17, the school awarded the design to Behnisch Architekten of Stuttgart, Germany, in partnership with Baltimore’s Ayers/Saint/Gross, Inc. As writer Stephen Zacks reports in this month’s issue of Metropolis, Stefan Behnisch is known for creating unique, high-performance structures, and it was his reputation for smart, sustainable design that helped edge him out over a very competitive field. (Behnisch beat out five finalists: Foster + Partners of London in association with Cho Benn Holback + Associates, Inc. of Baltimore; Dominique Perrault Architecture of Paris in association with Ziger/Snead Architects of Baltimore; Moshe Safdie and Associates, Inc. of Somerset, Mass., in association with Hord/Coplan/Macht of Baltimore; and SmithGroup Companies, Inc. of Washington, D.C.). “Stefan’s ideas about sustainable design and his creativity in responding to the evolving needs of higher education place him in the forefront of 21st-century architecture,” said UB President Robert L. Bogomolny.

Behnisch’s proposal for the law school includes classrooms, moot courts, a new law library, and other public areas for students. Now comes the hard part: turning rendering into reality. The design phase is scheduled to begin in the early months of 2009, with a construction start date of June 2010. The aim is to have the building open for the fall class of 2012. 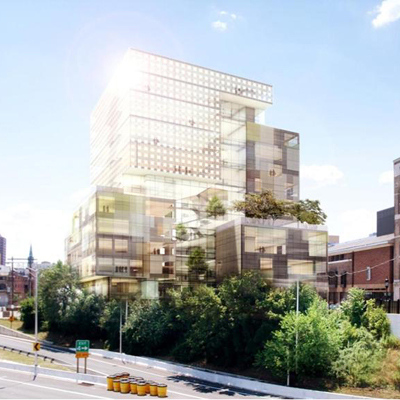