When Bob Berkebile approached the American Institute of Architects in the late 1980s to seek funding for research into sustainable architecture, he was told that it sounded more like an environmental problem than a professional problem—in short, “No, thanks.” Fast forward to 2011 and his firm, BNIM, has won the AIA National Architecture Firm Award, for […]

When Bob Berkebile approached the American Institute of Architects in the late 1980s to seek funding for research into sustainable architecture, he was told that it sounded more like an environmental problem than a professional problem—in short, “No, thanks.” Fast forward to 2011 and his firm, BNIM, has won the AIA National Architecture Firm Award, for its achievements in sustainable design.

For a man committed to reducing carbon footprints, Berekebile’s over 30 years of work in sustainability have left a lasting imprint on the green design movement. He founded the AIA’s National Committee on the Environment, helped create the U.S. Green Building Council, and contributed to the Leadership in Energy and Environmental Design, or LEED, rating system, used internationally as a standard to design and evaluate sustainable buildings. For Berkebile, sustainability is about fostering a new ethic. When it comes to water, that means treating “every drop that falls from the sky as a precious resource.” We spoke with Berkebile to find out how that attitude is reflected in design.

University of Kansas Students: How important is responsible water management in designing sustainably?

Bob Berkebile: I think water is the biggest challenge we face. We have all focused a lot on energy, appropriately, because of our carbon footprint, and it’s disastrous effect on the environment. As a direct result of our bizarre attitude about water, coupled with climate change, many places on the planet are already suffering for lack of potable water. In the very near future, I think we’ll be finding in this country that people will be shooting one another over water, and that a lot of our food production will be limited. So, it’s really time for a transformation in how we think about water as a resource and to design an integrated water management system that is consistent with the number of people on the planet and the water that’s available to us. 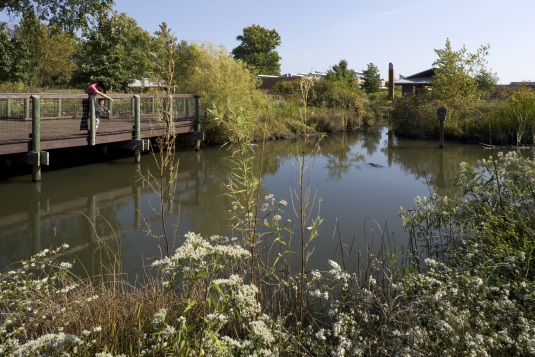 KUS: Do you think that systems like LEED go far enough in addressing water issues specifically? Has energy overshadowed water?

BB: It has. Because we haven’t done full cost accounting [taking into account all of the costs of resources used beyond cash outlays], the cost of energy has been a lot more expensive to a building owner than the cost of water, so there was a greater motive to reconsider energy strategies and to design buildings that were more energy efficient. That incentive hasn’t been present for water. But it will be. People are starting to realize how valuable and rare water is, so the market will adjust. We’re also finding that there is a negative symbiotic relationship between energy and water. If you look at most communities, you find that the largest consumer of water is the electric utility and the largest energy bill is the water services department. When you start looking carefully at these systems, it reveals how obsolete they are. It is necessary that we start rethinking all of our infrastructure as integrated living systems.

KUS: How can LEED be improved to account for this relationship?

BB: The current rating systems like LEED help reduce the impact of both water and energy systems and therefore the overall impact, but the tools must be changed to address these ‘hidden’ negative relationships.  New refinements now in the works, such as the REGEN concept we developed for the USGBC last year will do a much better job of addressing these negative symbiotic relationships because they will analyze everything from a whole systems perspective. 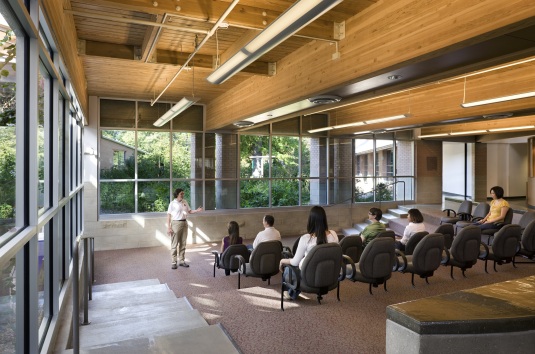 Anita B. Gorman Conservation Discovery Center: the building is a teaching tool for classes on conservation, aimed at an urban population.

KUS: On a smaller scale, do we currently have systems that can accomplish things like this in buildings?

BB: Absolutely. The technology is not what’s lacking. What’s lacking is the way we think. We have been using biological wastewater treatment in buildings now for a couple of decades. There’s a great example in Kansas City, Missouri. It’s a building built by the Missouri Department of Conservation, and all of the water in that building, from sinks and toilets, goes to a biological wastewater treatment facility, which looks like a greenhouse in the middle of the building. Those plants and microorganisms see what we think of as pollutants as food, and they increase the vitality of the plant system while purifying the water, and then the water goes back to flush the toilets again and so on, rather than just being released as sewage to be treated by chemicals and pumps and then released to a river. 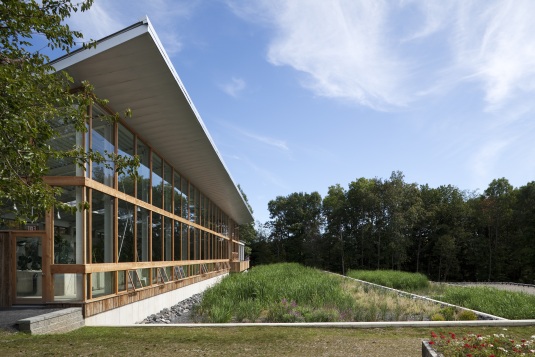 Omega Center for Sustainable Living: this wetland is watered with harvested rain water.

KUS: One of BNIM’s recent projects, the Omega Center for Sustainable Living , recently became the first project in the world to achieve both LEED Platinum and Living Building Challenge certification. What strategies do you use to manage water in that particular project?

BB: What’s important about that project is that it sees itself as being connected with not just the building and its site, but the entire campus and the Hudson River watershed. The clients have about 150 buildings on the campus, and the waste from all of those buildings was being managed by very old systems that were polluting the watershed. To the credit of the management at Omega, rather than just upgrading the old system, they really looked carefully at what could they do to transform it. The approach they selected was to design a living machine and environmental education center, which treats not only the water for that particular building, but for all the buildings on campus, putting pure water back into the watershed so that it becomes a part of revitalizing the entire system. The other benefit is that this is the first time we know about that a yoga class has claimed a sewage treatment plant as its venue for classes. 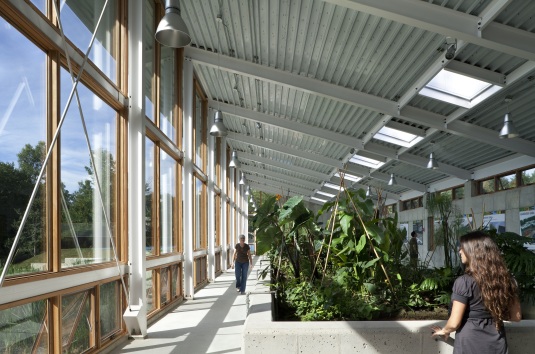 Omega Center for Sustainable Living: the biological organisms in this living machine accept our waste as their food, purifying the water through natural processes.

Well it’s obviously all about behavior, and without the behavioral change, we won’t have success. But we do know that we can design to incentivize better behavior. We have seen interesting results in our buildings such as occupants reducing water consumption when there is a Living Machine or some other biological waste water treatment system included in the building, or more people choosing to use stairs rather than elevators when the stairs are open and well placed with great views. We can offer people new strategies that they didn’t know were available, and in our experience, these ideas are truly loved. In most cases people just didn’t know it was a possibility. They didn’t know that they could live in a house or go to a school or operate in an office building that had such a positive impact on their human health and wellbeing. They didn’t know that they could live in a way that is climate positive. Knowing that it’s possible changes the equation.

Connor Donevan, Andrew Leicht, and Jack Rafferty, students in Simran Sethi’s journalism class at theUniversity of Kansas, are learning to communicate complex issues via social networking. This is part of a series of posts from a class exploring the intersection of social media and social justice and using water and design as its primary lenses of inquiry.  Follow the conversation on twitter, #metropolisH2O.

The Omega Center for Sustainable Living  featured in our October 2009 issue. On our blog, Jason McLennan and Sarah Costello explained how it received the Living Building Challenge certification.