Blowing the Others Out of the Water

There is a new naval battle being fought off the coast of Britain, but not of the kind that Admiral Nelson would recognize. The ocean is turning out to be the next frontier for renewable energy, and Britain leads the world in off-shore wind energy generation – it has already installed 330 wind turbines on […]

There is a new naval battle being fought off the coast of Britain, but not of the kind that Admiral Nelson would recognize. The ocean is turning out to be the next frontier for renewable energy, and Britain leads the world in off-shore wind energy generation – it has already installed 330 wind turbines on its seas. Now several engineering firms are vying with each other to develop giant wind turbines for Britain, with capacities in excess of 10MW – double the size and power of any existing turbines.

Two Norwegian firms are currently in the lead, both offering mammoth windmills that “float” in areas where the sea is too deep to lay foundations. The oil giant StatOil is already a major supplier of gas to the UK, but it is now all set to enter the renewable energy market. Last year, in collaboration with Seimens, it constructed a full-scale working prototype of its floating offshore wind turbine, HyWind (above), off the south-west coast of Norway. HyWind is anchored to the ocean floor, and special software controls the movement of the windmill blades such that they stabilize the structure. The prototype has already started supplying power to the grid, so the idea clearly works. Now, as part of The Forewind consortium, StatOil has won the largest license for UK offshore wind farms, at Dogger Bank, 70-120 miles off the Yorkshire coast.  The other Norwegian contender, Sway AS, has just been granted a license by the Norwegian government to test its own floating wind turbine. If that proves successful, then the sea off the coast of Scotland will probably be next. 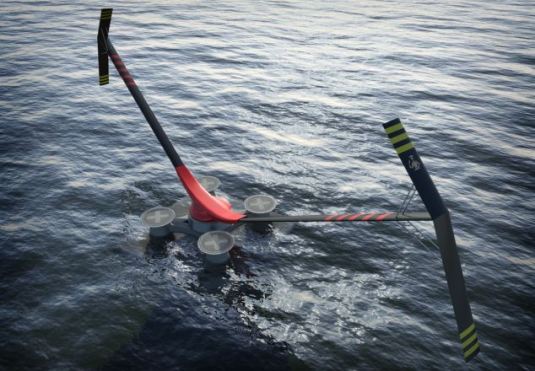 Last month, British firm Wind Power Limited unveiled a design that, in terms of radical innovation, pretty much blows the others out of the water. The Aerogenerator X (above) was designed by the architectural firm Grimshaw, in collaboration with Wind Power’s engineering team, and engineers from ARUP, BP, Rolls Royce and Shell. Inspired by the spiraling motion of a sycamore seed as it falls from a tree, the Aerogenerator X spins on a vertical axis. This means that it achieves the same energy performance, but is half the height of a regular horizontal-axis turbine. Also, most of the fancy stabilizing software in the floating windmills is only needed because standard wind mills are top-heavy. The Aerogenerator, of course, doesn’t have that problem – greatly simplifying and economizing its construction. The designers also claim that its blades experience far less wear and tear because of their orientation, which means maintenance will also be cheaper. And while aesthetics may not be a primary consideration in wind turbines that will be several hundred miles out at sea, it doesn’t hurt that the Aerogenerator looks good.

Britain is not the only country where off-shore wind generation makes more economic sense than wind farms on land. The European Wind Energy commission has predicted that the EU’s dependence on wind power is slated to increase at an astronomical rate over the next decade, and the market for off-shore power is likely to grow to hundreds of billions of dollars a year. And as the big engineering firms go about saving our planet by dotting our seascapes with wind farms, I can’t help but be glad that there’s at least one architectural firm in the fray.