In real estate, there can be a big difference between rendering and reality.

Silo Point on the Baltimore Harbor. Photo from their Web site.

There’s a new condo project in Baltimore that’s been getting a lot of attention lately. Local architecture firm Parameter, Inc transformed 1920’s-era grain elevators into modern waterfront condos with uninhibited views of the city skyline. Silo Point, as the project is called, opens this month and it’s not just causing chatter for its dramatic design; the real estate community is abuzz over the fact that developer, Pat Turner, decided not to pre-sell the units.

In a city where the harbor is rapidly transforming from industrial to residential, Silo Point stands out from the pack for not selling units years in advance of completion. Most new projects lining the water’s edge, like the Ritz-Carlton Residences and the Pier Homes at Harborview, used high-tech renderings, fly-through technology, and watercolor boards to entice potential buyers with images of future luxury. You buy a piece of real estate based on the belief that the rendering will match reality, but there is always the risk that the result might not resemble the saleable vision (Atlantic Yards in Brooklyn can’t even get its pre-construction renderings straight) 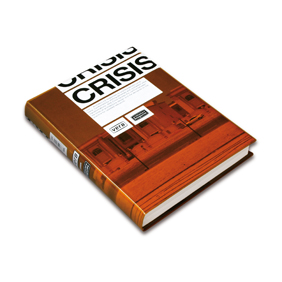 Now imagine that kind of speculative real estate on a city-wide scale. In the new publication Verb Crisis, editor Ramon Prat takes aim at Dubai and the fact that the city is “built around a future bought and paid for in the present.”

“In Dubai, what is projected, rendered, and unbuilt already exists as reality,” Prat writes. “While none of these properties have yet been built, their computer-generated existence is enough to fuel a persistent and nearly blind confidence in Dubai and its representative brand.” He offers a series of images, one set showing dusty photographs of Dubai as it actually looks, another showing the color-saturated visions of its future, including one sales office that mimics the view from your highrise condo with a wrap-around rendering of the yet-to-be-built city skyline (Metropolis presented another possible future skyline in the November 2007 issue).

Prat’s essay is just one of 26 in Verb Crisis, the sixth volume in Actar’s architecture “boogazine” series (called such because the publication is a mix between a book and a magazine). This edition analyzes the “underlying questions and doubts regarding current models of urban development,” according to the editors, and suggests, through a series of position papers and profiles on new projects, ways in which we can rethink the function of architects and planners. It’s a compelling read, one that reminds us that in this brave new world of rapid urbanization, we could use new models for development.