Civic involvement is top of mind in Washington, D.C.—at least in the White House, even if it’s scarce on the Hill. This spring, it will be also on the agenda at the National Building Museum, which, on May 11, will honor three “civic innovators” who have helped build strong communities and neighborhoods, made breakthroughs in […]

Civic involvement is top of mind in Washington, D.C.—at least in the White House, even if it’s scarce on the Hill. This spring, it will be also on the agenda at the National Building Museum, which, on May 11, will honor three “civic innovators” who have helped build strong communities and neighborhoods, made breakthroughs in clean-energy technology, and aided in recovery from a natural disaster. The honorees are Perkins + Will, the architecture firm well known for its stellar pro-bono work, in addition to its expertise in building stellar schools, hospitals, and other large projects; the U.S. Department of Energy’s Solar Decathlon; and the founders of the New Orleans Habitat Musicians’ Village (Harry Connick, Jr., Branford Marsalis, Ann Marie Wilkins, and Jim Pate). 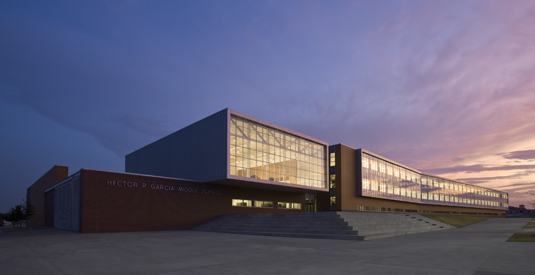 The designers at Perkins + Will are the first to tell you that their pro-bono work enriches them as practitioners and human beings as much as it helps their clients. Working within less-than-privileged communities, they connect with a segment of society that benefits from sensitive design enormously. The work may show up in a free neighborhood health clinic that provides essential services with dignity, or any other service that needs design skills to communicate purpose, organize space, and create a safe and beautiful place that shows respect for every human being. I heard one member of the firm say that with 23 offices around the globe, the Perkins + Will’s pro-bono service is the size of a small-to-middling architecture firm. Such a group can do a lot of good. And they do.

The scene on the National Mall during the 2009 Solar Decathlon (read more here). Photo: Stefano Paltera/courtesy the U.S. Department of Energy Solar Decathlon

I’ve been following the DOE’s Solar Decathlon since the inception of the program in 2001, and it gets more exciting with each new crop of buildings that end up on the great Mall of our capital each fall. The best thing about this program is the interdisciplinary teams that come together at architecture schools with the purpose of showing the American public how innovation in home design can help them save energy as well as understand our connection to the natural environment. What could be more inspiring than a group of exhausted but enthusiastic students (after all, they not only research and design their buildings, but they also construct them) showing off their technical skills while exuding hope for our clean energy future? Talk about civic involvement!
.

Related: In October 2008, we wrote about Public Architecture’s 1% program, which encourages pro-bono service by architects and designers. Last October, we looked at some of the highlights of the National Building Museum’s House of Cars exhibition. That same month, Elizabeth Evitts Dickinson kept tabs on the winners and runners-up in the 2009 Solar Decathlon.