Every year on my birthday my grandparents regale me with the story of my birth. Their overly-enthusiastic tale resembles the beginnings of a Roman epic about a god-sired hero’s journey through life. Theirs is certainly not the gushy, stressful, crying mess that my birth probably was. My parents, on the other hand, are largely silent […]

Every year on my birthday my grandparents regale me with the story of my birth. Their overly-enthusiastic tale resembles the beginnings of a Roman epic about a god-sired hero’s journey through life. Theirs is certainly not the gushy, stressful, crying mess that my birth probably was. My parents, on the other hand, are largely silent on the subject, except for my father’s advice to new dads: “If she always beats you at cards, suggest a game during the labor; you’re sure to win.” “Remember to take off any rings. Otherwise she’ll break your finger during contractions.”

In the fourth volume of IDEO’s “Designs On-”, which takes up the theme of birth, only a few products  are designed for the new father. But like my dad’s whimsical advice, each one highlights the business of being a daddy: It’s one hell of a breath-coaching, stats-boasting, driving-like-a-racer journey!

To get down to the honesty behind men’s experience of labor, IDEO Munich created the video, “Men in Labor.” In 5:58 minutes, a half dozen fathers and one mother, from different nationalities, offer brief clips of their experiences during their children’s birth. These range from the advice given in birthing classes (“Because we thought it was so fake. ‘Ah. Now darling, I have to remind you to be happy, or that you’re doing a great job.’”), to their frustration with society’s belief that the man will never feel the woman’s pain (“‘This is a pain that you will know nothing about. Even if you’re in the room, you’re still a million miles away,’ and actually my feelings were telling me something else, that no, I’m not. I am very much connected to my wife.”), to the hilarious (“He just used the wrong words… and I bite him in the arm. But it helped.”). However, they all stick to one theme: the dad’s side of the story.

Among the father-focused products featured in “Designs On-Birth” is the line of Dad T-shirts. Beneath such titles as “New Dad” and “Solo Dad,” a blank spot is printed, reminiscent of where you would write your name on your junior high gym clothes. Instead of using this space to allow your P.E. teacher to identify you and demand that you do 15 more push-ups, the soon-to-be or new father can inform those nearby of his status and how prepared he actually is, by writing his thoughts across his chest. Think of it as a wearable baby-bump, proclaiming to the world “I’m gunna be a daddy!” “I have NO idea what I’m doing!” and “How was I to know that was the BACK of the diaper? Both sides look the same!” 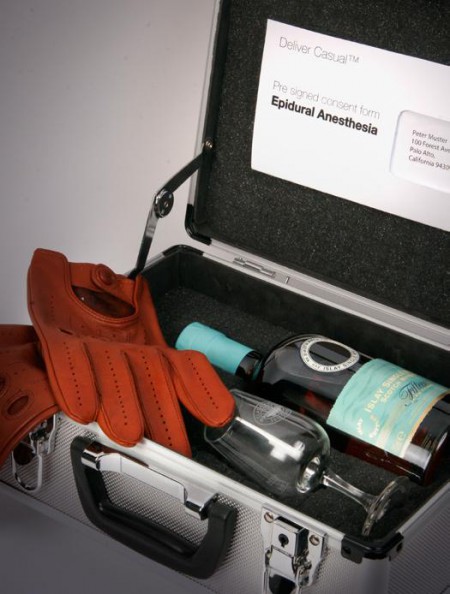 If the father-to-be is a little less TShirtHell.com and a lot more GQ, there’s the Deliver Casual Kit. In it he’d find everything he would need on delivery-day: a bottle of whiskey, leather racing gloves, a red “Kojack light” for the roof of the car, and completed hospital documents. Nothing says “Get out of our way, lady with a baby” like jumping behind the wheel and doing your best “Blues Brothers” car-chase scene impression.

But what about after the whiskey has been drunk, the baby has been born and he has diapering down to an art? At that point, there’s only one thing left to do: boast as much as possible.  Introducing “Baby Brew,” the “app for that” for beaming, boasting new fathers who want to post their baby’s quickly growing measurements like this season’s fantasy football stats. Baby’s height, weight and age are paired with their photo to create an easy-to-share document. In a generation when ultrasounds are shared via Facebook rather than being carried around in a back pocket or stuck with a magnet to a fridge, I feel that, even if “Baby Brew” doesn’t quite exist in iTune’s store yet, it’s just a matter of time before my phone begins to light up with real-time updates of how big my friends’ kids are getting. 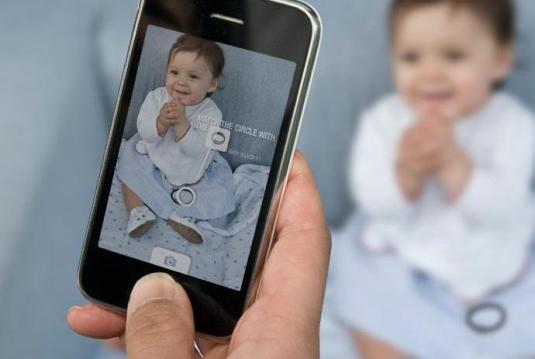 Although most of the 37-page PDF document focuses on mom and baby, these four had me laughing and considering throwing a baby shower for one of my new soon-to-be-dad friends. However, I wonder why it is that no submissions made it that gave dad a “break incase of emergency” kit for dealing with hormonal mom. What guy wouldn’t want an easy to reach container of lilac smelling lotions and tissues for her, a list of the right things to say and a flask for him? But regardless, “Designs On-Birth” shows us that we’re evolving into a society that wants to know about, and design for, the often overlooked population of fathers, usually thought of as only wincing observers.