Philadelphia has always had an engineered relationship to water and the Schuylkill River. In 1812, the Fairmount Water Works, designed by Frederick Graff, opened on the eastern banks of the Schuylkill River in Philadelphia, supplanting a small pumping station in Centre Square to become one of the earliest large-scale municipal drinking water facilities in the country. It stands as a proud symbol of forward thinking civic action to this day — but what is the environmental legacy it presides over? 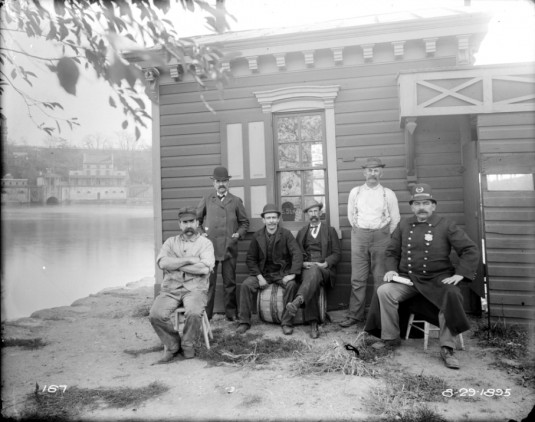 City leaders had formed the Watering Committee (now known as the Philadelphia Water Department) in the 1790’s. Centre Square Water Works opened first, modeled after the work of famed architect Benjamin Latrobe. Fairmount’s original steam power was later replaced with water wheels in 1822, and superseded by turbines beginning in the 1850’s. The Water Works ceased operations by 1909. In 1883, architect Frank Furness completed the distinctive Undine Barge Club just up the river from where these gents pose at the Fairmount Locks with the Water Works in the background.

From the mid-19th century until 1914, when better filtration and chlorination came into play, typhoid fever epidemics born of unsanitary conditions affecting streams and creeks running through the city of Philadelphia resulted in high mortality rates. 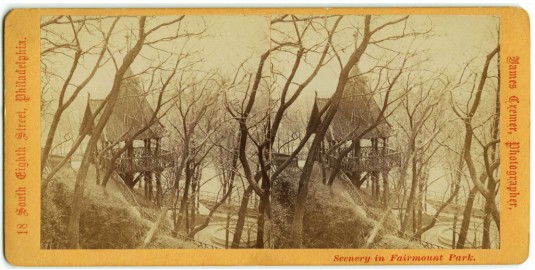 The city’s 19th century leaders were so advanced in their thinking you just have to marvel. They created the largest urban park in the United States, Fairmount Park, as a buffer attempting to cleanse and protect the watershed leading to the river. Typhoid fever became a problem in spite of the creation of Fairmount Park, which never really adequately protected the water supply from pollution. Though outstripped in its protective powers by the scourge of unregulated industrial practices, Fairmount Park was an enormous gift to Philadelphians and is a beautiful recreational resource to this day.

THE ROWER in THE GREEN CITY

The Schuylkill River of international rowing fame is sometimes beset by curious wind patterns. On the same row, you might hit a headwind going up river and, surprisingly, a headwind coming down. Torrential rains may stop abruptly but the true impact of the rain may not be felt until later when roiling waters from miles upstream catch up to Boathouse Row.

After an overnight rainstorm, it’s not so unusual to witness a morning parade of partially submerged tree trunks, or a refrigerator, propane gas tank or soccer balls floating by. There are some mornings when you swear you could almost walk across this watery debris field.

Sometimes your boat seems to intuit where these floating munitions are and you feel blessed that you missed even a glancing blow…especially when you didn’t see it coming. Once, local newspapers documented an entire full-grown tree suspended horizontally within a concrete bridge arch.

Fish do jump here, turtles sun themselves, and blue herons with their prehistoric silhouettes glide past or stand motionless in camouflaged vigil. When the river clears, the beauty of water, light, trees and sky harmonizes with the clean catch of the oars.

The effort is to ameliorate some of the damage done by the existing built environment and also integrate new development using a multi-pronged approach of rain gardens, green roofs, rain barrels and pervious paving to name a few tools. The key is “permeable surface” that drains into the subsoil — something that governs both your backyard and the sprawling asphalt parking lot at that shopping center you just pulled into. Otherwise, the entire system backs up and pollution levels soar.

A rain garden is a garden designed to collect runoff from impervious surfaces such as roofs, walkways, and parking lots, allowing water to infiltrate the ground.

A green roof is a roof or section of roof that is vegetated. A green roof system is composed of multiple layers including waterproofing, a drainage layer, an engineered planting media, and specially selected plants.

Pervious pavement is a specially designed pavement system that allows water to infiltrate through the pavement and never become runoff. This system provides the structural support of conventional pavement but is made up of a porous surface and an underground stone reservoir. The stone reservoir provides temporary storage before the water infiltrates the soil.

This is a Zen approach to stormwater management. Take the landscape and forces of nature and rather than countering or conquering them (the model we have used as a country for centuries), engage those same topographic dynamics and allow them to resolve back into the land, naturally.

In 1967, Benjamin Braddock (Dustin Hoffman in the “The Graduate”) was told the key to his young future lay in one word, “Plastics.”

In 2012, Howard Neukrug, PE, Commissioner for the City of Philadelphia Water Department (PWD), would probably tell you it’s “Stormwater Management” or the equivalent, equally sexy “Demand Reduction.” But you have to appreciate he’s taking the city in a specific direction that has as much to do with the values we live by as it does about the diameter of stormwater piping and green infrastructure strategies that are all part of his overall, guiding vision.

Neukrug is looking down the road 100-200 years as visionary city leaders did in the 19th century. No crystal ball sits on his desk (just tons of e-mails). Instead, he’s following the Hippocratic oath to do no harm. In other words, don’t create new problems with your new solutions — one of the essential challenges of any sustainable design or engineering endeavor. His job would be a lot easier if he just issued an RFP (Request for Proposals) for a thirty-five foot diameter pipe at X number of miles long for X billions of dollars to meet EPA standards. Construction firms would salivate at the mere mention of the idea.

PWD is committed to meeting EPA standards but Neukrug has chosen not to act on a narrow reading of environmental law. You can meet those same standards creatively and comprehensively and, he hopes in the long run, more economically. You can plan for sustainable recreation, safety, aesthetics, and access to waterways in a poor city — or just meet the letter of the law with an epic construction investment burdening many generations, indefinitely, into the financial future.

Neukrug favors a “softer, resilient” approach. But he pays more than passing respect to his predecessors. “Green infrastructure would not be feasible without the backbone of [existing] infrastructure.” He has no choice but to vigilantly maintain the 3, 000 miles of existing stormwater piping in Philadelphia, sixty percent of which is combined sewer and stormwater. 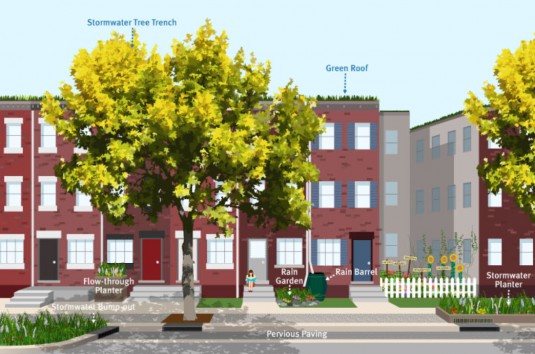 A vision of what green stormwater infrastructure tools would look like when implemented in Philadelphia’s neighborhoods. Trees, shrubs, perennials and grasses help manage rainwater, or stormwater, by diverting water and preventing it from becoming runoff via infiltration, evapotranspiration, and filtration.

“Green City, Clean Water,” then, is a controlled experiment with backup, redundant systems. There is a unique learning curve to every new technology you introduce, passive or otherwise. The public’s tendency is to see “green” as a panacea not only for the environment but for joblessness, too. Neukrug realized that you could make the mistake of prematurely training an army for a particular green innovation that has no supporting market. Nonetheless, there is that pressure of expectation placed upon PWD in a city with a high unemployment rate. So now the thinking is to have providers add green services incrementally, more cautiously, until and unless the market takes off.

Commissioner Neukrug faces a massive educational challenge. It goes beyond explaining the complexity of his operation to any one party or vendor. He needs everyone and every city department to get on board. He needs citizens and developers to get on board. Contractors and developers are, characteristically, conservative. “You go first” is the mentality towards innovation and investment that is all the more entrenched during a severe economic downturn.

Philadelphia Water Department programs disseminate very useful information now via the web to small, individual computer screens. But what if data in the public domain, interactive technology, and funds were drawn together to dramatically interconnect the broader community? The public would be engaged in restoring its own relationship to clean water as the source of life, livelihood and play.

Imagine a touch screen public kiosk or “Water Wall” from which information flows in real time. The entire city is mapped out on an interactive, large-scale screen in a city park or acts as a changeable mural on the blank side of a building. Maybe it’s detachable, mobile.

Richly layered data reveals industrial hot spots and broken water mains that flash red. Every mile of the city’s network of storm water piping is accounted for. New green roofs and green infrastructure projects light up as growing areas of pervious cover replace impervious. History is also layered on so that you can see where and when key players and industries in the watershed’s exploitation and protection stepped into the picture.

Over time, this dynamic Water Wall of Philadelphia becomes more consistently green, tipping towards the desired balanced relationship between the urban and natural landscapes. Searching your own neighborhood’s contribution to the Green City? There’s an app for that.

“The first tenth inch of rain” remains Neukrug’s constant focus. That layer of runoff carries the worst pollutants and must be kept from pressure points that would release or overflow into the river. The river used to be the solution itself, of course, but the EPA has decreed those days long over. Howard Neukrug means business and assures, “We value dry overflow points.”

That credo might not inspire you, personally, to individual action but it’s all part of a bigger picture of which every Philadelphia citizen is a part in Water Commissioner Howard Neukrug’s view:

“We have one water, one city, one resource. We have to use it and dispose of it wisely.” 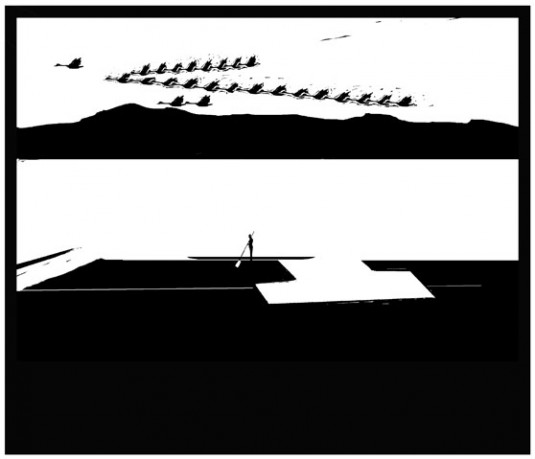 Courtesy of the Philadelphia Water Department:

Photo of group at the Locks; Fairmount Park gazebo