Ministers from 24 countries, representing 80 percent of global energy usage between them, put their heads together in Washington, D.C., last week at the first ever Clean Energy Ministerial. The big guys signed up to take action on things like carbon capture, clean energy, and electric vehicles, but their plans for the building industry are […]

Ministers from 24 countries, representing 80 percent of global energy usage between them, put their heads together in Washington, D.C., last week at the first ever Clean Energy Ministerial. The big guys signed up to take action on things like carbon capture, clean energy, and electric vehicles, but their plans for the building industry are particularly interesting. For if all goes well with the Global Superior Energy Performance (GSEP) partnership that was announced on Tuesday, we might have to look at sustainable architecture in a new way.

In minister-speak, the GSEP partnership will be “a multi-country effort to create and harmonize nationally-accredited energy performance certification programs that encourage and reward strategic management of energy use and third-party verified energy reductions.” Essentially, Canada, the European Commission, France, India, Japan, Korea, Mexico, Russia, South Africa, Sweden, and the United States have signed up to adopt a global standard not just for deciding how sustainable a building is, but also what the acceptable methods for reducing energy consumption will be. And this rating/reward system will not be LEED. 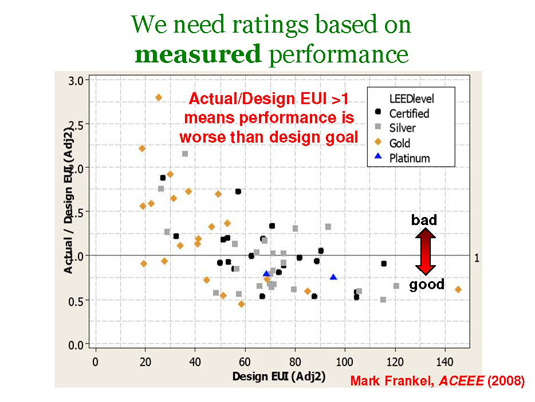 Among the slides that the host, Secretary Steven Chu of the U.S. Department of Energy, presented at the ministerial, is a nice little surprise: A graph (reproduced above) that plots the intended Energy Use Intensity (EUI) of various LEED-rated facilities, against their actual or measured EUI. Several Gold- and Silver-rated facilities actually perform far worse than they were designed to.

To address this discrepancy, the GSEP partnership proposes the forthcoming international energy management standard, ISO 50001, as the definitive system. The ISO 50001 will be a comprehensive, auditable standard that can be applied not only to the actual building or industrial facility, but potentially to an entire company’s operations. This means that the energy performance of the building will be seen as one link in a much larger chain, encompassing all the activities that are carried out under its roof, and their energy implications. So, hypothetically speaking, having a garden and a bike rack will not earn your office building green brownie points if your company has just caused an oil spill in another part of the world. But note the future tense—ISO 50001 will not be published until early 2011.

In the meantime, seven mega-corporations—Walmart, Target, 3M, Dow Chemical Company, Grubb & Ellis Company, Marriott International, Inc., and Nissan—and two other organizations, the Cleveland Clinic and the Massachusetts Institute of Technology, have agreed to pilot the ideas of the GSEP partnership in their facilities worldwide. In the absence of a published ISO 50001 standard, they will probably use its draft version, the ANSI Management System for Energy, ANSI/MSE 2000:2008. The participating nations will also be busy forming public-private partnerships to figure out energy management methods for particularly problematic sectors like power, steel, and hotel chains. Task groups will explore energy-saving technologies like “cool roofs” and power shares, which can potentially be used by any industry. The ministers hope to have results to show in time for the next Ministerial, to be hosted by the United Arab Emirates in spring 2011. But considering that half the year will be spent in waiting for the new standard, don’t expect to be wowed by the progress of the partnership.

Nonetheless, such a pro-active and committed plan at the governmental level is rare, so businesses will probably be dealing with an ISO 50001 auditor pretty soon. In asking us to look at a much bigger picture, the ministerial demands some re-adjustment in the way we think about sustainable building, but it bodes well for the future of the planet.