Eye on the Ball

The new and (and soon-to-be) ever-present New Year’s Eve Ball is revealed.

When the ball drops on Times Square this New Year’s Eve, it will cast 32,256 LEDs flashing some 16 million colors over the scores of kazoo-tooting tourists who people the event each year. It will be bigger, brighter, and glitzier than ever before. It will be, to quote one spokeswoman, “truly befitting the glory of New York.” But will it befit the city’s newfound spotlight on energy efficiency?

Yes and no. Last year’s ball had fewer LEDs that, though 10 to 20 percent less efficient, drew less power overall—the equivalent, the organizers boasted, of 10 toasters. This year’s ball, unveiled Tuesday in a dark warehouse in Yonkers, New York, complete with a mock count-down, latter-day Frank Sinatra rasping “New York, New York” over the speakers, and original, ball-inspired poetry (“It Glimmers & Cracks Open/ Brilliant Joyous Dawn”), has more than three times as many LEDs and will radiate from its perch atop One Times Square year-round. In keeping with the domestic metaphor, the organizers assure us that it’s no more wasteful than powering two ovens.

Maybe so, but there’s nothing efficient about permanently illuminating a 12-foot decorative dome in an area already so bright and tacky it looks like a Liberace fever dream. And given the city’s aggressive drive to tamp down on greenhouse gas emissions under the aegis of third-term hopeful Mayor Michael Bloomberg, it would seem an odd move. (I should note that the building’s owners, not the city, funded the ball, reported at several million dollars.) Then again, did you see last year’s design? It looked like a pearl onion on a shish kebab. This won’t do in New York. Looking back over the ball’s 101-year history, razzle-dazzle has always been the crucial design aesthetic, from its early days as a 700-pound, iron-and-wood behemoth to its ’90s incarnation as an aluminum, rhinestone and computer-controlled testament to the heady excess of the digital age. Today, sustainability might be a sign of the times, but spectacle is the city’s legacy. And this year, more than any other year, the city needs its Brilliant Joyous Dawn. 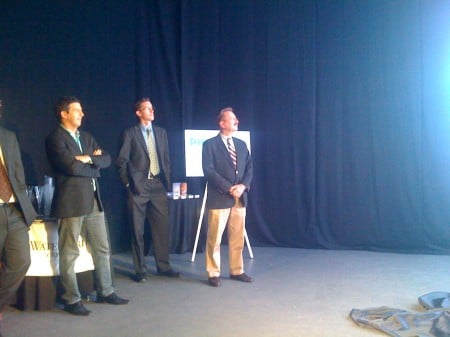