Standing in the lobby of the Microsoft -funded MIT NERD lab this past Saturday felt like a trip into the future.  Opaque glass paneling lined the walls spreading ambient light upon concrete surfaces. A well-spoken man rose from behind a sleek black desk and guided me to my destination.  I arrived in a room with […]

Standing in the lobby of the Microsoft -funded MIT NERD lab this past Saturday felt like a trip into the future.  Opaque glass paneling lined the walls spreading ambient light upon concrete surfaces. A well-spoken man rose from behind a sleek black desk and guided me to my destination.  I arrived in a room with high ceilings and a picturesque view of the Boston skyline. Suddenly, the serene futurism of the concrete and glass was interrupted by a collection of rough silhouettes. They looked like veterans of earthen bounty, and smelled like it too.

I have met many organic farmers in my short time on earth, but never so many in one room, and certainly not discussing design problems. Farmhack is an effort to pair designers, engineers, business people, and others with farmers, in order to increase efficient production and distribution or generate new ideas to help today’s farmers. The morning was set aside for introductions and pitches from both farmers and the public, to be collected later and developed into palatable ideas.  The ideas ranged from innovations in farm irrigation and harvesting machines, to regional grow houses for farmers in the off-season. 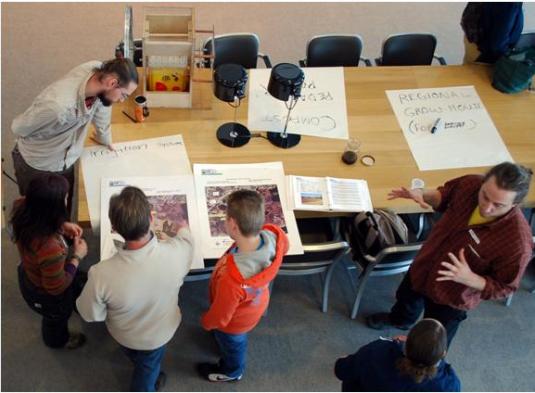 The ideas aren’t really what I focused on during my time there. What struck me were the incredible problems that our country will be facing  in the coming years. How do we feed ourselves sustainably and naturally with respect to such variables as climate change? The farmers shared their frustrations about climate inconsistencies that effect crop output. The gathered concluded that farmers need help, design help for that matter, to bolster higher crop yields. Everyone recognized that the basis for output in the Massachusetts region is something we have little control over—the seasons.

The growing season is short in the North East, only lasting 4-5 months. During the off peak months, farmers are forced to get other jobs to make ends meet.  If there were a way to extend the growing season while simultaneously employing the farmer it would greatly increase the power of the organic industry.

I talked to one farmer, Trevor, who expressed his need for a communal storage house during the winter months. Farmers could use this space to store their left over fall harvest, normally thrown out during the winter. This could increase their income whilst decreasing food waste. What a sensible idea.

Farmhack is just another sparkling example of a field which requires designers’ attention but , until now, has been ignored. Engineers get the picture. The majority of the non-farmers at the event were trained engineers. Maybe this is because they understand that every cog in a machine must work for the wheel to turn– agriculture is a wheel on which our nation rides. As I see it, MIT has defined another area of interest for designers. Those who wish to make a difference, there’s meaningful work to be done.

Matthew Kihm, 22, is an industrial design graduate from the Rhode Island School of Design, where he also read science, and took collaborative classes at the Massachusetts Institute of Technology (MIT). This, he says, gave him an understanding of design from a scientific standpoint. His goal is to use this dual interest to not merely create products but also improve America’s infrastructure.