Ferrari Takes Itself Out of This World

What would Ferrari be if not eye-catching? The same aesthetic that has people stopping and staring on the street is now doing just that on a grandiose scale with Ferrari World, on Yas Island in Abu Dhabi. The 200,000 square meters of flat roof emerges out of the desert in startling iconographic clarity which can […]

What would Ferrari be if not eye-catching? The same aesthetic that has people stopping and staring on the street is now doing just that on a grandiose scale with Ferrari World, on Yas Island in Abu Dhabi. The 200,000 square meters of flat roof emerges out of the desert in startling iconographic clarity which can only elicit images of a Ferrari GT and get your blood pumping by the massive use of Ferrari’s trademark red. And if the pronged extraterrestrial roof isn’t enough to make your brain scream “FERRARI!”, Benoy Architects of London have added the world’s largest Ferrari logo, scaled at a little over 213 feet by 159 feet. Beneath the roof, a mosaic vertical structure of red aluminum paneling and Ipasol solar control glass creates a façade which is inclined at 10 degrees towards the interior and allows some of the outside light to penetrate the interior  while protecting the building from overheating. 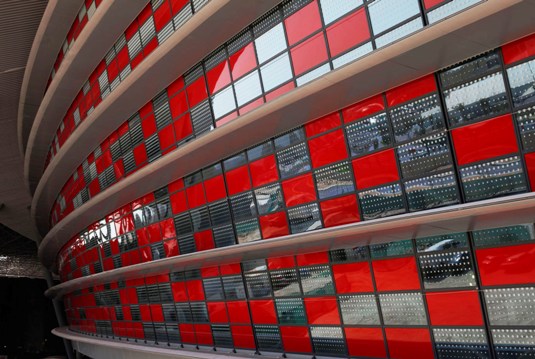 Basically, the architects created a massive motor in the center of the desert to house Abu Dhabi’s new Formula One track and a new amusement park. What more could we expect from one of the world’s flashiest auto producers?

And if the outside still isn’t  flashy enough for you, the interior gives viewers a real reason to stop and stare. A glass funnel, dubbed the “light eye,” is reminiscent of the core of an alien mothership, penetrating right down the center of the building. It allows in natural light, while being glazed enough that the desert heat does not become a hindrance. To ensure that the funnel would be as efficient as possible, the Belgian façade builders, Jungbluth Alu Partners, had to individually glaze and produce each of the 2,640 solar controlled glass panes. At the point where the light enters, the  eye has a diameter of 100 meters, tapering to 17 meters at ground level. The trumpet shape, encased in a metal grid, is bound to be more breathtaking, and bizarre, in person than we see in pictures. 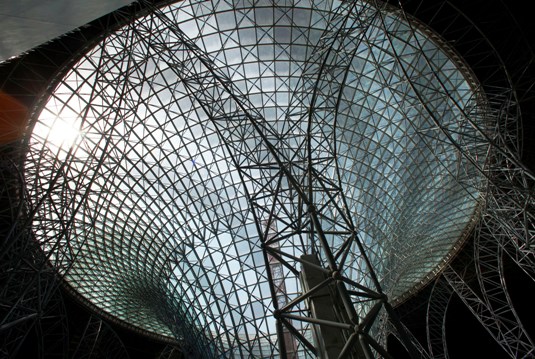 Now, I like cars. I confess to having been caught watching Top Gear and the Formula One races on a number of occasions.  But the more I see and learn of this building, the more I can’t help thinking “Really? That’s just a bit much.” A quick trip to FerrariWorldAbuDhabi.com shows an array of car-themed amusement park attractions from the family-oriented factory tour to see how Ferraris have been designed and perfected through the years to the “thrill” ride of G-Force: a fast-paced rollercoaster which boasts that you’ll “find the tower of speed”.  For the car enthusiast whose family just doesn’t get the allure of car shows and who wants to avoid  going to Disney World once again this year, this massive tribute to the famous automobile probably seems like a god-send. The rest of us, though, may be questioning whether or not it’s worth it and if we’re going to let Scotty beam us up into this one.