This green giant is now the first hotel with a Platinum LEED status.

In this month’s issue, Metropolis reports on the myriad sustainable efforts of lodgings around the world striving to be green in Eco Innkeepers. And already we have an update on one of these featured hotels: Proximity Hotel in Greensboro, North Carolina. Since its completion in October 2007, Proximity and its ever-ebullient staff have been determined to achieve a national record: being the first hotel to achieve Platinum LEED status from the U.S. Green Building Council. Well, we couldn’t keep a secret: It’s official.

Metropolis is the first to learn from both Proximity and the USGBC that the hotel’s 70+ sustainable practices have earned them the coveted Platinum rank. As of a few weeks ago, only 12 hotels worldwide were LEED certified. None of those were platinum.

LEED is the nation’s most exclusive certification program for green building, and arguably the most watched. This March, a researcher at Southeast-based LS3P Associates, Joel McKellar, began a LEED documentation management blog called Real Life LEED. Its achievements thus far, according to AIA, have been to examine the pros and cons of various certification paths, review sustainability and industry websites, and to train a critical eye on any LEED activity, such as forthcoming revisions made to LEED’s program outlined in its “2009 Vision and Executive Summary.” 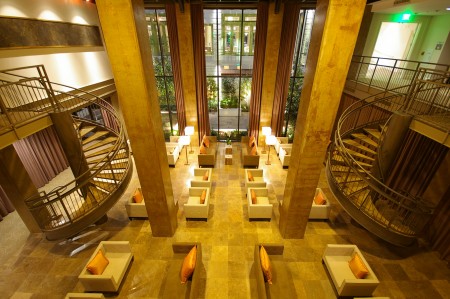 The lobby of the Proximity Hotel

A few weeks ago, I spoke to Marc Heisterkamp, USGBC’s Manager of Corporate and Investment Real Estate, about the principles of green hospitality. He explained the many obstacles hotels face when attempting to reduce environmental impact. Hotel buildings are large and costly to build; building ‘green’ isn’t always the cheaper route, even if maintaining them that way may cut costs over time. Hotels often require multiple elevator shafts and high amounts of power sent to each individual room unit.

But most importantly, I learned from him, it’s the priorities of the hospitality industry themselves that stand in the way of green building. Hotels and restaurants are all about maintaining the integrity of the interior environment. Customer satisfaction rests crucially on issues like constant air quality control, extensive lighting systems, and keeping high volumes of hot water available round-the-clock. The very tenets of the hotel business seem pitted against all that is natural. There’s little room for compromise when it comes to balancing guests’ needs against those of the surrounding environment. 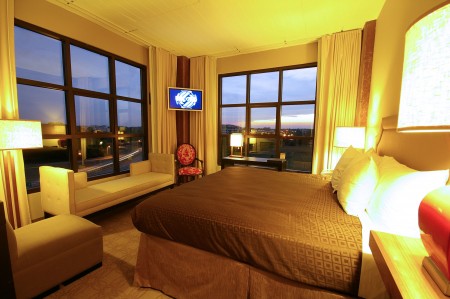 Proximity’s rooms (above) and suites (below) prove that compromise in guests’ comfort need not be an issue when going green. 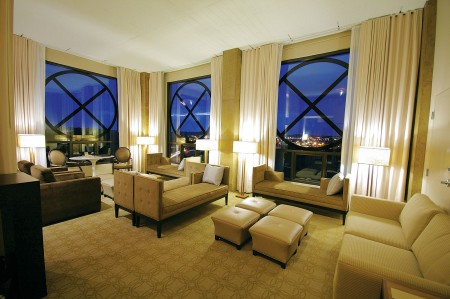 Heisterkamp indicated that Proximity’s chances at successfully striking that balance were high, even before Proximity’s year-long process from application to certification was complete. It stood above the pack because its design “worked from an environmental as well as a guest’s perspective.” Like all hotels seeking LEED status, “their main concern was that it would detract from the guest experience. But in Proximity’s case, it’s only enhanced it.”

Yesterday on the phone, Proximity’s CEO and founder Dennis Quaintance spoke candidly about the hospitality industry and the long-term benefits of going green. He’s got some advice for hotel investors. “There’s an urban legend, in hotel investment conferences and in the larger industry, that it’s not going to pay off. So you only do so much. You get the green label, and that’s it. That makes me angry. I don’t want to be near that karma.” He was walking down Manhattan’s 38th Street after paneling on the Condé Nast Traveler World Savers Congress Event. “I’m a pure hotel guy. I’ve invested 30 million dollars here, so I wouldn’t be saying this otherwise. We [Proximity] are going to be financially happy. I’m a capitalist and I’m saying, ‘We’re going to come out ahead here.'” Quaintance took his first hotel job at fifteen, and he hasn’t left the business since. He’s invigorated by the prospect of being a positive example within the industry.

Next up, Quaintance plans to renovate the O. Henry Hotel, his other Greensboro hotel under Quaintance-Weaver Hotels & Restaurants. He will be seeking LEED Platinum again.