The Jefferson National Expansion Memorial is the 91-acre park that surrounds Eero Saarinen’s monumental Gateway Arch in St. Louis. While the Arch is a national icon, the park is completely cut off from the city by an Interstate  Highway in the west and a patch of wasteland across the Mississippi in the east. Crisscrossed by […]

The Jefferson National Expansion Memorial is the 91-acre park that surrounds Eero Saarinen’s monumental Gateway Arch in St. Louis. While the Arch is a national icon, the park is completely cut off from the city by an Interstate  Highway in the west and a patch of wasteland across the Mississippi in the east. Crisscrossed by thoroughfares and mostly ignored by tourists, it has come to be seen as an obstacle to the development of St. Louis downtown. Ten months ago, The City + The Arch + The River competition challenged architects to use the park grounds as a way to renew the bonds between St. Louis and its most famous monument.

The five finalists were announced last month, and a design proposed by an interdisciplinary team led by Michael Van Valkenburgh Associates (MVVA) has just been declared the winner. 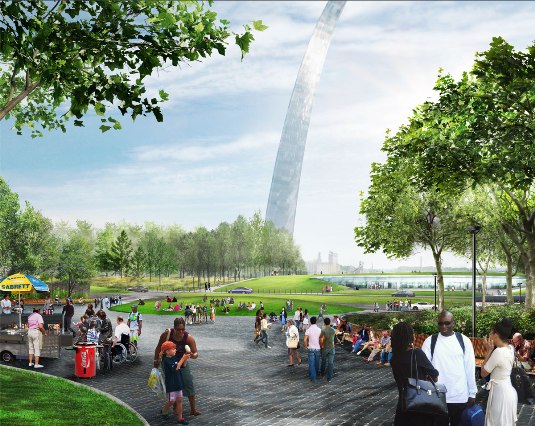 The MVVA team chose to forgo large dramatic interventions, and instead proposed a number of small but creative modifications and additions to the grounds surrounding the arch. Responding to what they saw as the three defining elements of the site – Light, River, and Horizon – the team hopes to keep the focus on the arch, but to allow locals and tourists a chance to also enjoy the environs.

Several of the features seem to be specifically designed to make people just spend more time wandering around. A single, centralized way of visiting the monument will be replaced by a multiplicity of activities. For instance, a large parking space will be replaced by three smaller ones in different neighborhoods. This not only makes for multiple approaches to the park, but will also bring tourist business through those neighborhoods. A similar philosophy underlies the other features – adding three new gathering spaces, relocating the museum entrance, and building a public transportation network.

The road that runs along the Mississippi’s western bank, just behind the Arch, will be banished. In its place, a pathway that takes advantage of the river’s changing levels will allow people to walk right up to the water’s edge. The derelict, overgrown patch of wetland across the river will be integrated into the park, with elevated canopy trails that fly among the tree tops, affording spectacular views of the river’s expanse, the majestic Arch, and the cityscape behind. 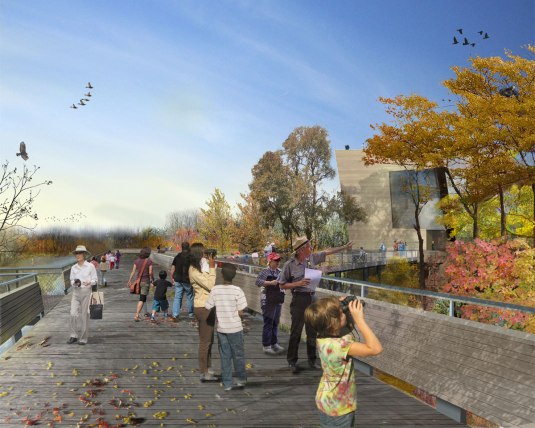 Between now and January next year, the MVVA team will begin a series of consultations with various stakeholders, including the city administration, each of whom will offer their opinions on the proposal. Some community groups, for instance, have cast the Interstate Highway, I-70, as the villain of the piece. They’ve insisted that the highway be converted into a more citizen-friendly boulevard. MVVA has already won them over by making a plan that currently proposes a one-block overpass, but is also compatible with removing the highway altogether.

In fact, there seems to be something to please everyone in the MVVA proposal, which has been characterized as “a winning combination of the ambitious and the manageable.” With such a complex, multifaceted plan, it will be a long journey of budget revisions and feasibility studies before the team reaches the finish line stipulated by the competition – October 28, 2015 – the 50th anniversary of the completion of the Arch. But the design already has all the makings of a fine birthday gift.