John Pawson’s “Ribbon for Japan.” Image courtesy dezeen. The catastrophe that ripped through Japan on March 11 seems like the worst amalgam of every disaster we have ever seen – earthquake, tsunami, fire, and to top it all, nuclear radiation. 2010 and 2011 are undoubtedly the Design for Disaster years: architects and designers are still […]

The catastrophe that ripped through Japan on March 11 seems like the worst amalgam of every disaster we have ever seen – earthquake, tsunami, fire, and to top it all, nuclear radiation. 2010 and 2011 are undoubtedly the Design for Disaster years: architects and designers are still rising to the challenges of Haiti and Pakistan. But we have a deep emotional connection with Japan, a country that has always been a design powerhouse. The challenges are greater this time, the stakes are higher, and the responses – some more sensible than others, in this age of web 2.0 – have been faster than ever before.

The first line of action seems to be fundraising, and the number of things being sold “for Japan” is astounding. A quick Google search even turned up an “Unquake Japan” iPhone case. It has barely been two weeks since the disaster struck, and T-shirt maker Threadless has already closed their competition to design an inspirational t-shirt for Japan. (All proceeds from the sales will go to the American Red Cross’s Japan Earthquake and Pacific Tsunami fund.) A more poetic gesture comes from the architect John Pawson, who spent many formative years in Tokyo. His website offers a Ribbon for Japan (above) for download, and suggests that you make a £1 donation to the Red Cross.

The Internet is clogged with what must be hundreds of posters: anyone with a computer and design software is competing to find new ways to bung a red circle onto white paper. Like all old symbols, the flag of the rising sun, popularly known in Japan as the Hinomaru, has many disputed connotations and a long, troubled history. But that doesn’t seem to particularly bother, or even inform, the poster-making hordes. When has a disaster arrived so fortuitously with a pre-designed, immediately recognizable brand? The temptation is too much to resist. In spite of some murmurs of protest, James White’s poster of a cracked Hinomaru has been so popular that the first run of production raised $7,000 for the Canadian Red Cross and the site is now taking pre-orders for a second batch that will ship on March 25th. 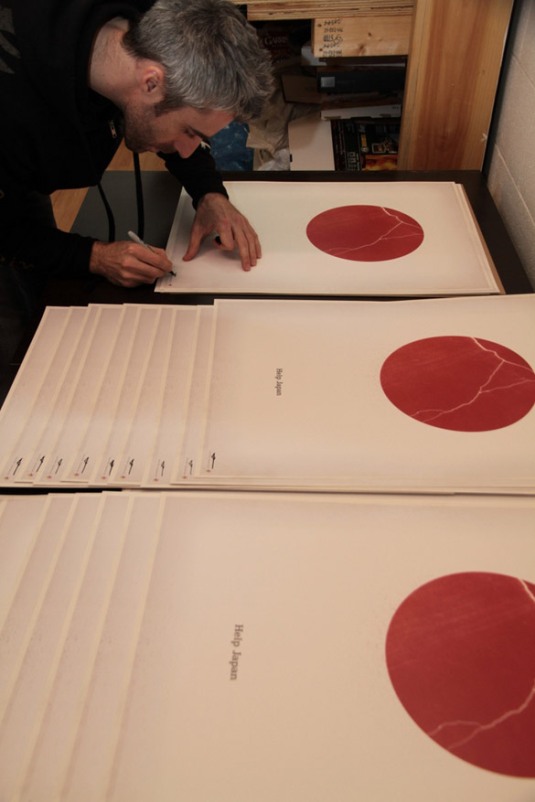 In the meantime, more concrete efforts are underway. The American Institute of Architects has reached out to their Japanese counterparts, offering assistance in relief work. Shigeru Ban architects, ever the masters of light, functional structures, have just completed building shelters in Haiti. That expertise will no doubt come very handy in the coming months. But over the years, the firm has developed many other strategies in response to earlier earthquakes in Japan in Niigata and Fukuoka. A knockdown cardboard partition system and another one made of cardboard tubes (below) are already being supplied to the gymnasiums where refugees are being housed – providing much-needed privacy in a time of great deprivation. The Voluntary Architects Network, of which Shigeru Ban is a member, is accepting donations to support these and other efforts. 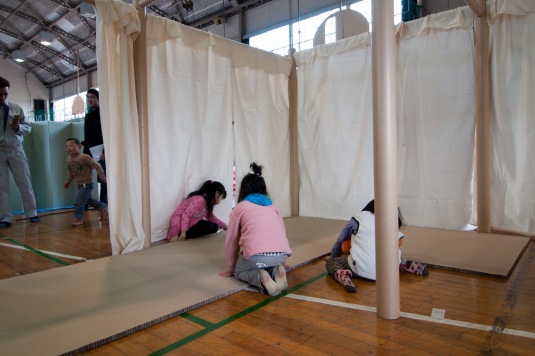 But one of the earliest responses to the Japan earthquake came from Architecture for Humanity (AFH), and this is perhaps due to their agile, distributed structure. AFH chapters in Tokyo, Osaka and Kyoto mobilized quickly, sending out teams to assess the damage, and to start organizing the community for the massive task of re-building.  An impressive timeline for their plans is in place, informed by AFH’s experience of very similar situations in the 2004 Indian Ocean Tsunami, the Haiti earthquake, and the floods in Pakistan. They have set themselves very clear goals – working with local professionals and providing technical expertise, giving financial assistance, and rebuilding civic infrastructure. In every country in which they have a chapter, AFH acts as any local organization would: their interest is ultimately in long-term reconstruction. Their website is accepting donations, and the solutions they come up with will no doubt be documented on the Open Architecture Network.

While this much-needed spadework continues, there seem to be some other valuable avenues of action. A few days ago, the University of California at Los Angeles (UCLA) updated a list of its experts on “earthquakes, tsunamis, Japanese architecture, the psychological effects of natural disasters and the health effects of radiation exposure.” The list makes for a very interesting read, not least because there is only one architect on it. Design for disaster is ultimately all about collaboration, not just with local communities, but with experts in fields that designers would rarely encounter otherwise.

Speaking at State of Design this Tuesday, IDEO’s CEO Tim Brown argued for a coming convergence of science and design. But so far, the conversation on that topic has circled around such fascinating things as genetic modification, engineering organic materials, and growing houses out of trees. The UCLA list is a ready reckoner of some of the people missing in that discourse – radiation biologists, geophysicists, and child psychologists specializing in disaster- and terror-related stress.

We have steadily grown stronger in our designerly responses to natural disasters, after the 2004 tsunami, Katrina, and Haiti. And over the next few months, we will undoubtedly rally with the Japanese people as well. But in the aftermath, it is important to take a step back, and consider design for disaster as a long-term field for design research that requires both workforce and funding. Everyday, somewhere in the world, communities are stripped of their access to resources and placed in inhuman conditions, by both manmade and natural catastrophes. The disaster in Japan is easily fetishized in posters and t-shirt competitions, the Pakistani flood victims last year were less lucky. Design for disaster cannot be left to the whims of online t-shirt buyers taking a break from Facebook, it must become a area of sustained effort.