Like many others, I was brimming with anticipation last Wednesday to see the High Line’s recent expansion, the second section of a three-part plan to build a linear park out of an abandoned railroad on Manhattan’s West Side. Ever since my first visit to the High Line last September, I have been smitten with the […]

Like many others, I was brimming with anticipation last Wednesday to see the High Line’s recent expansion, the second section of a three-part plan to build a linear park out of an abandoned railroad on Manhattan’s West Side. Ever since my first visit to the High Line last September, I have been smitten with the experience of standing on an elevated greenway overlooking the waterfront. I’ve been equally blown away by the ambition of a project initiated and envisioned by Friends of the High Line. It became my favorite spot in New York where I often brought my visitors to marvel at this innovative development.

So when Section 2 of the park opened on June 8th, I hurried to 11th Avenue in the morning, eager to catch my first glimpse of the city’s latest urban redesign. I started my visit where the old High Line ended, climbing up the stairs at the new access point on West 23rd Street where I was greeted by a 4,500 square-foot lawn, the only portion of the High Line inviting visitors to sit on the grass. Looking at the flat lawn occupied by young students with sketchbooks and adults lying leisurely on mats, was like staring at a stock photo—seemingly orchestrated but perhaps a good sign that the public space was being used just as the designers intended. 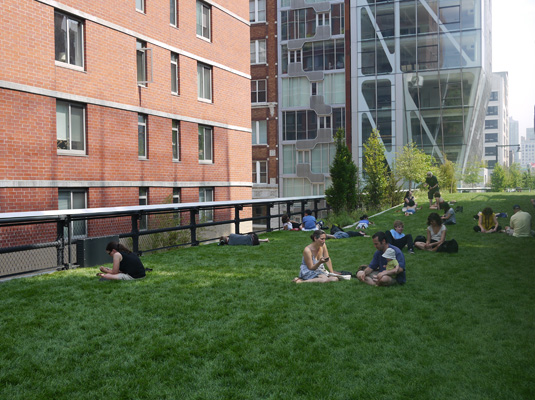 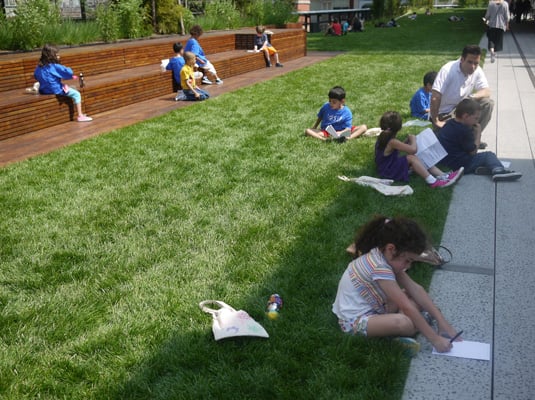 But aside from the tiny patch of lawn, the rest of Section 2 seemed bleak. There are fewer features along the new addition, situated further apart from each other, making this section of the High Line feel more like a boardwalk and less like a park. Contrary to the amphitheater seating overlooking 10th Avenue and the Sundeck, which invite visitors to sit and stay, the Woodland Flyover and Wildflower Field are long stretches of walkway that encourage meandering through canopies of trees, perennials and moss, yet to fully flourish, beneath. As I walked up the narrow metal ramp, I found the greenery surrounding the Woodland Flyover underwhelming, comparatively inferior to the lush renderings released by the High Line that had set up my high expectations. Friends of the High Line are aware of this transition though, as advised on their blog: “When you see it for the first time, remember that the landscape is still young, and it will continue to evolve through its first season and beyond.” 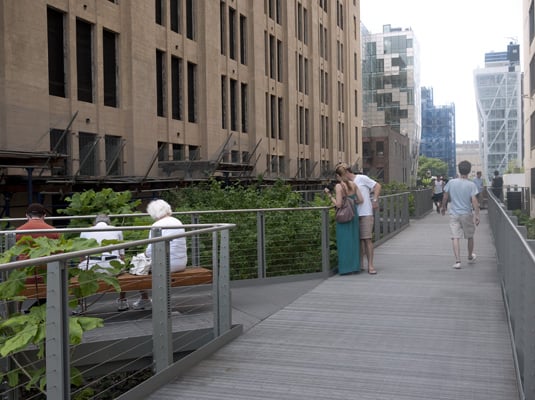 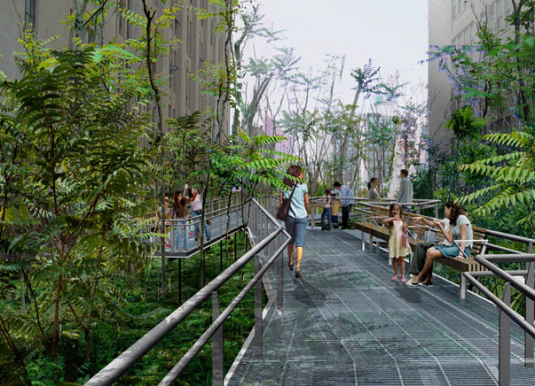 Viewing platforms and benches are distributed throughout the walk, enabling visitors to gaze out from the structure, looking into the center of Manhattan or the Hudson River waterfront. There is even a Viewing Spur at 26th Street facing 10th Avenue, with a glass window referencing the space where billboards were once attached, now framing a view of some steps where visitors are encouraged to sit. But overlooking dusty construction sites, a gas station, and vacant brick buildings was not the same High Line experience I grew to love. I saw only a few people who sat down to enjoy the view. 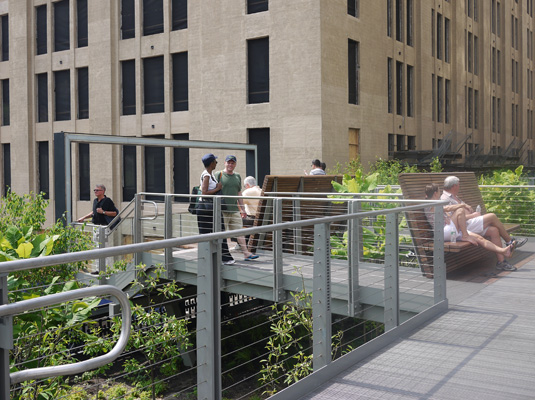 While nothing about the new section of the High Line is exceptionally impressive, there isn’t much room for it to go wrong, simply because it is an extension of the original High Line, building upon an already celebrated and successful model. Still, I was looking for something more after my impression on the opening day, and I inherently found it when I went back over the weekend with a friend. Once I saw that the park was congested with pedestrians on the narrow path peering down at the young plants below their feet, and that the curved bench along 29th Street was actually being used, it was easier to forgive the jarring industrial backdrop and the scorching sunlight from all directions with no shade. Wandering under the park at 30th Street and next to AOL’s playful summer installation, Rainbow City, I also found The Lot, a temporary public plaza populated with food trucks and an outdoor bar packed with people gathered to grab a bite to eat. 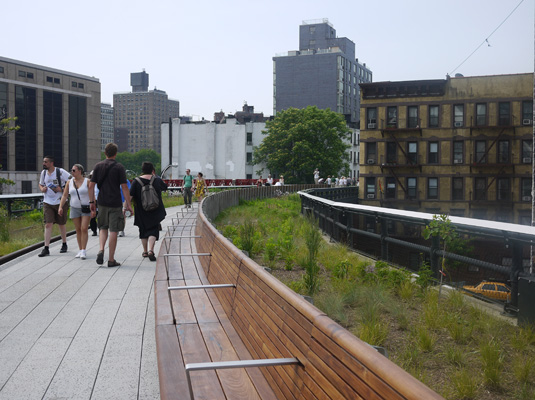 Just as the High Line transforms and defines its neighborhood, bringing to it opportunities for development and stunning architecture, the elevated park itself is incomplete without the people who visit it, even when the plantings are in full bloom. The view of neighboring buildings and the people that use the public space, are just as much “The High Line” as the structured walkway itself, and that was what was missing from my first visit—a context and purpose for a beautiful park. I wasn’t looking for more cutting-edge design, art installations or unique plants, but I needed to see the life of the High Line, from the people who supported it and brought the train track back to life in the first place, in order for me to be convinced the design of this public space was an effective one. As it was unutilized and accompanied only with sparse plants and abandoned architecture that morning, the new High Line was not much more than a sterile structure in a desolate district to me. 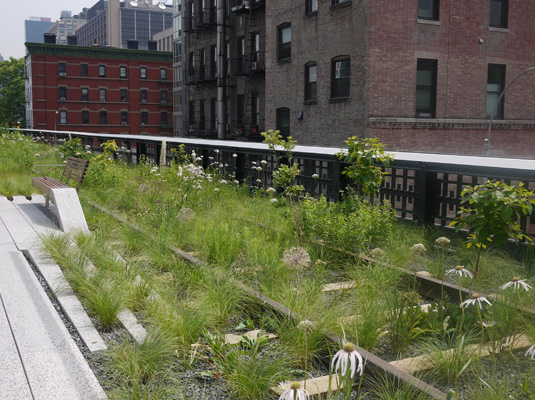 Since the High Line opened in 2009, its presence in the Meatpacking District has transformed the culture of the industrial west side in Manhattan. As some nearby scaffolding suggests, it won’t be long before high-profile buildings and development spring up around the north end of the park too. As construction work continues beyond 30th Street and people flock to visit the new extension over the summer, the High Line and its surrounding neighborhood will evolve and become enriched—a characteristic of something truly belonging to New York. I’m glad I went back again, to see the liveliness of the original park extend 10 blocks and change my mind about its reception as public space. The High Line lives up to its hype. 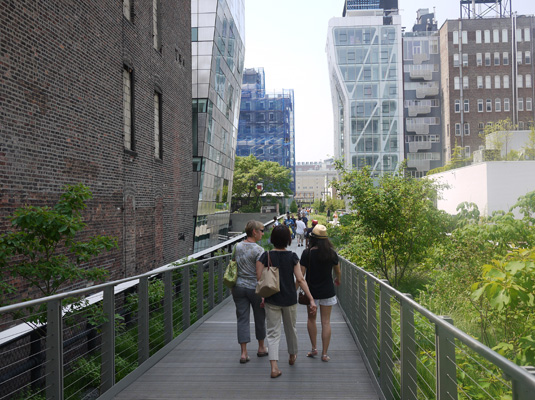