I see Hong Kong as a model of smart growth management and land use planning. It’s a city were policy dictates that development must concentrate on only 25% of the land area, with the remaining 75% preserved as open space. This policy ensures that the region’s lush green spaces remain intact. It also maintains scarcity […]

I see Hong Kong as a model of smart growth management and land use planning. It’s a city were policy dictates that development must concentrate on only 25% of the land area, with the remaining 75% preserved as open space. This policy ensures that the region’s lush green spaces remain intact. It also maintains scarcity and high land values in developable areas. This is crucial to the local government because its primary source of income is land leasing.

Looking at development in Hong Kong through Western eyes, I noticed another impact of the city’s tightly concentrated density: the compact clustering of residential and working populations supports a diverse, competitive, and often ingenious retail community.

My first up-close encounter with the retail streetscape occurred in Tsim Sha Tsui, an upscale neighborhood on the Kowloon side of Victoria Harbor (map). What struck me most was the extreme permeability at the pedestrian level. Few storefronts at the ground floor, save a handful of banks and higher-end boutiques, have full walls. Separated from the sidewalk by only a few inches of floor height, merchants do business in cheerful cubicle-sized spaces under fluorescent lights while people flow past, around, in and out. 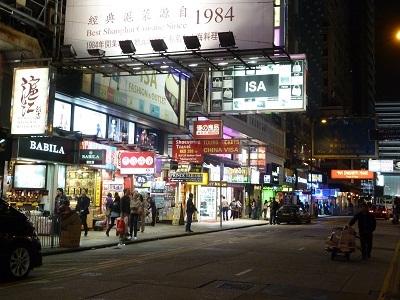 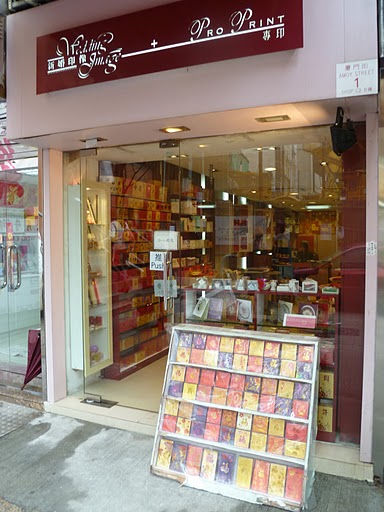 Not a centimeter of space is wasted; even alleys between buildings, like the one crammed with blooms and forming a haphazard flower shop, are put to use. (I assume the florists were paying some rent for this semi-sheltered space.) Brimming with merchandise of all types, size and quality — from luxury handbags to consumer electronics to pungent dried squid snacks — most shops take full advantage of their tiny spaces with meticulous organization and splashy merchandising. The stalls of retail, though housed within bulky permanent structures, are reminiscent of a farmers’ market because of their diversity, size and fluid approachability. 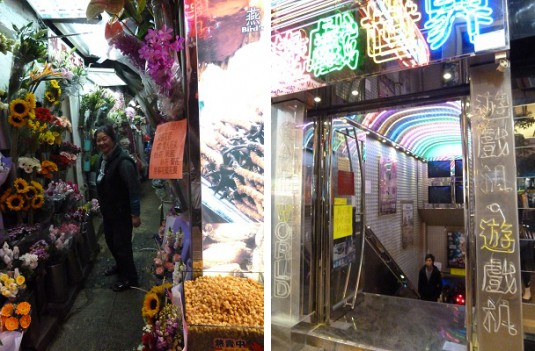 A flower shop, and the entrance to an escalator.

Further contributing to the flows of foot traffic to and from the right-of-way, escalators carry passengers to unseen destinations above- and below-grade; elevator lobbies and reception desks are open to the street. Even at 10 p.m., the line between public and private space is an utter blur.

On Hong Kong Island, outdoor vending markets are a common sight, bringing coziness and interest to the street. Permeable ground-floor storefronts are not only stuffed with merchandise, they often double as workshops for entrepreneurial, space-constrained shopkeepers. 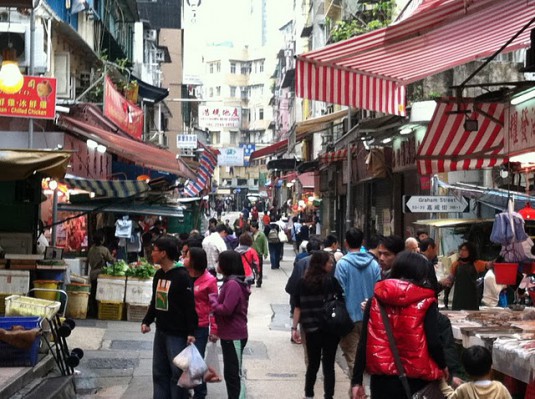 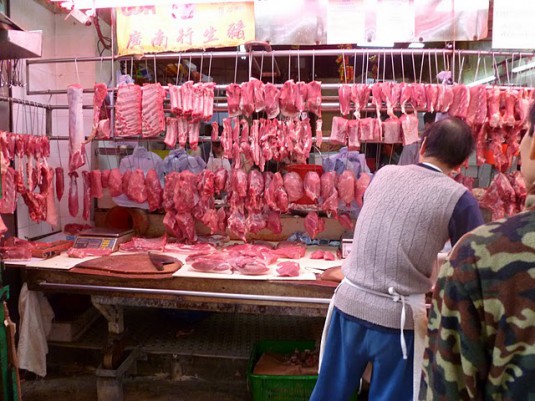 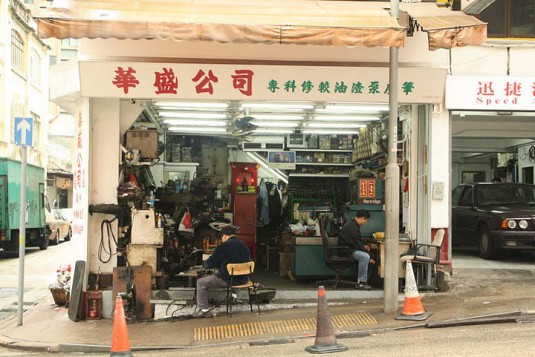 There isn’t nearly enough space at the ground level to meet demand, however, so Hong Kong’s retail remains interesting well beyond the first floor. In my hometown of Seattle, suggesting even second-floor retail in a mixed-use project can make developers and lenders uneasy.  In Hong Kong, it’s not unusual to see signs advertising shopping and services on the 23rd floor of a building. According to Stefan Krummeck, director of the Hong Kong office of famed architecture firm Terry Farrell & Partners, shopping center design is made incredibly complex by the need to draw shoppers effectively through a space and provide unblocked views around corners, down hallways, and vertically between floors. 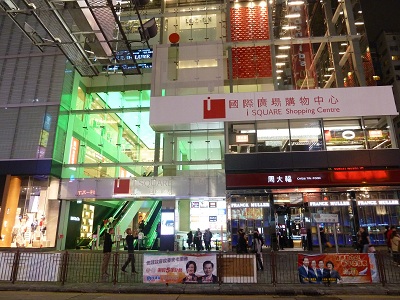 The i Square Shopping Center.

Although Hong Kong’s population density is only about double that of modestly dense Seattle, its developed neighborhoods are among the densest in the world, with at least one boasting more than 300,000 people per square mile. When housing looks like the photo below, there’s little wonder how even awkwardly placed, hard-to-get-to retailers can stay in business.

Still, it’s no cakewalk for those at the top. One businessman told me that his modest ground-floor tailor shop — maybe 225 square feet, fronting a side street — isn’t selling enough to support the rent of $60,000 HK per month (roughly $7,500 US, or around $33/SF monthly), so he is moving to an interior space on a higher floor. He said he knows it’s going to hurt his business. Hidden entrepreneurs have to make a pretty compelling case to bring in new customers and attract a critical supply of repeats and referrals.

As a result of the intense competition for shopper attention, Hong Kong’s independent shop owners are a scrappy, resourceful bunch. For instance, some shop owners lease a minimum amount of ground-floor space just to display their most eye-catching inventory. Once a customer has shown interest in their wares, a cheerful sales associate directs her across the street and up several levels, to the larger-footprint store where the majority of goods are for sale. 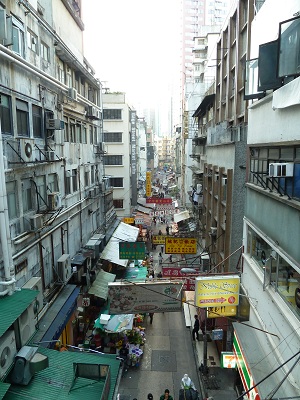 Proprietors without a ground-floor presence stand doggedly on the sidewalks well into the night, pitching their services to passersby. For those selling the more basic necessities, however — like this underground supermarket — an arrow or some neon seems to be enough: 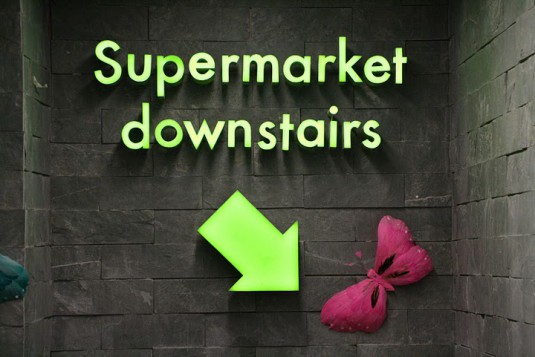 As a result of all this frenetic advertising and wayfinding, navigating Hong Kong’s retail scene is a little like a scavenger hunt. You follow little clues and hope to connect with someone who will tip you off to the real finds. Try to find the same shop twice, and it’s equally likely that you’ll stumble across a different but perfectly acceptable substitute for whatever you wanted. The tiling of entrances, activity and advertising creates a layered urban experience that turns the head every few seconds. It certainly keeps life at the street level exciting.

Retail may seem like a trivial thing, but good planners and developers understand that well-done retail is a place-maker in its own right. Its presence gives color and character to a neighborhood, and attracts users who populate the street during the day and at night. Seattle has got its share of eclectic shops , restaurants and clubs, and the city is even experimenting with some truly exciting retail formats, including a charming cluster of small businesses renting pockets of open-floorplan space in the historic Melrose Market; the recent conversion of an often-criticized rave hall into an indoor public market, and new legislation in the works to support street food. These types of successful innovations help define and delight neighborhoods, but still more ground-floor retail spaces sit empty, built because zoning demanded non-residential use at the sidewalk level without a check or balance to determine whether the surrounding density was enough to keep a real tenant in business.

The diversity of shops that a neighborhood can support are directly linked to the density and diversity of the population nearby. Not every retailer has the broad customer draw of a grocery store. Eclectic shops will only capture so much of the market, so the overall pool must be large. In short: one of the best ways to help a local retail scene thrive is to live densely, and to support policy that makes density livable.

Julia Levitt is a masters student in real estate studies and an Affiliate Fellow of the Runstad Center for Real Estate Studies in the College of Built Environments at the University of Washington. The interdisciplinary group of Fellows recently returned from a research trip to Hong Kong. Read more about their findings on their blog.