“How Was Your Non-flight?”

JetBlue passengers go on a trial run of its new Terminal 5.

By now, you’ve probably heard that, last weekend, JetBlue held a dry run of Terminal 5, its new 635,000-square-foot, $743 million facility at JFK. Around one thousand dyed-in-the-wool Jetters checked in to nonexistent flights, diligently filed through security stations, and stood in line to board phantom planes, all to help the building’s engineers, Arup, work out circulation and way-finding kinks before the opening on October 1. In return, there were free JetBlue caps. Naturally, I couldn’t think of a better way to spend my Saturday. 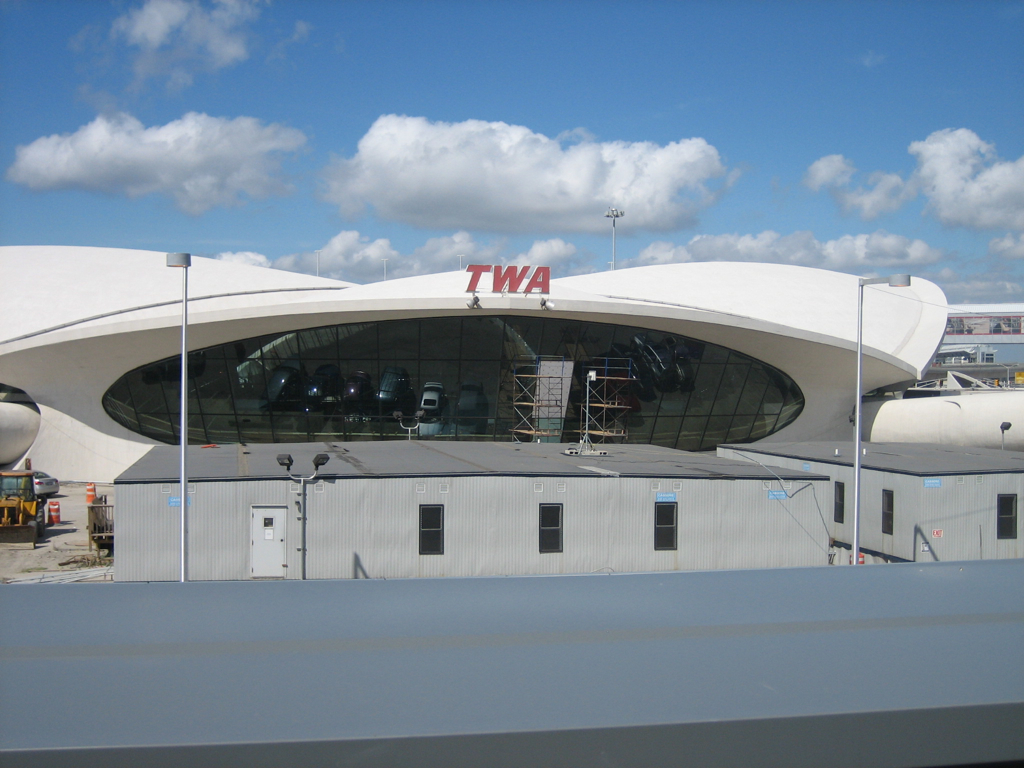 The first thing I noticed when I arrived was how great the old Saarinen building looks. Really, hats off. The new Gensler-designed terminal, right across the street, is likable enough, but Eero’s swoops make me swoon. No surprise, then, that JetBlue’s CEO, David Barger, told me that he wants to see the old building put to use—as a hotel, perhaps, or a mall—within a year. (Weird side note: the TWA sign itself is landmarked, so it’s not going anywhere. Good thing it’s not a decommissioned United Airlines terminal. That could get awkward.) 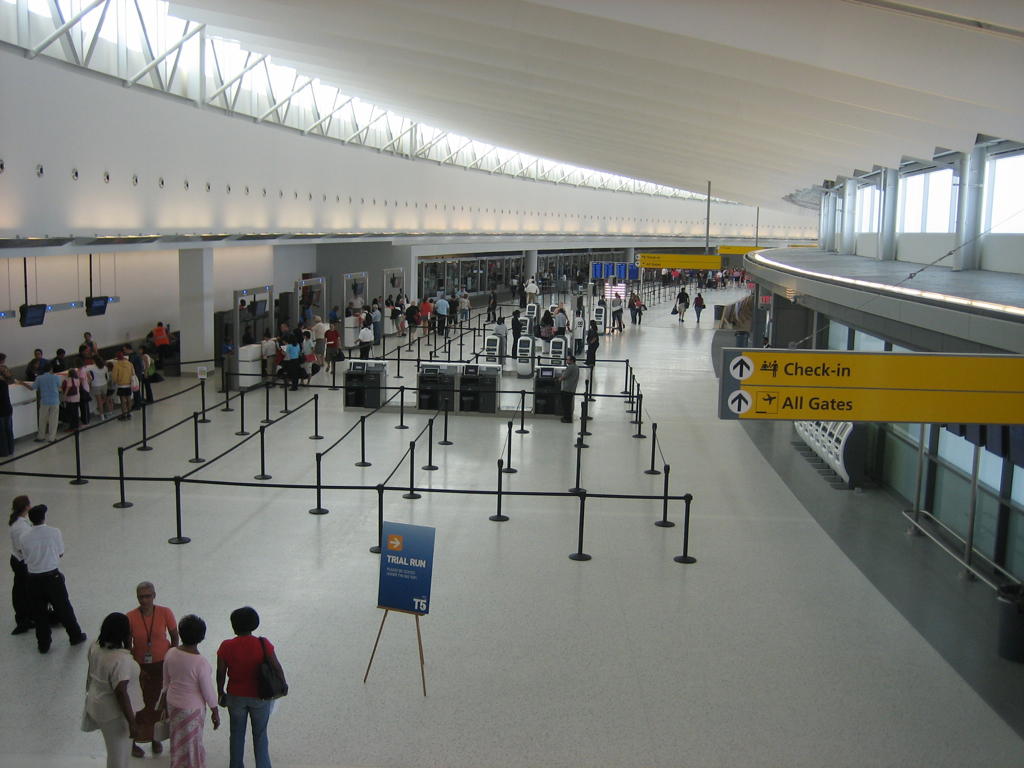 Still, the new building is nothing to complain about. It’s clean and airy, with plenty of natural light and nice detailing. But enough about that. It’s 10:30 in the morning—time for . . . hamburgers? 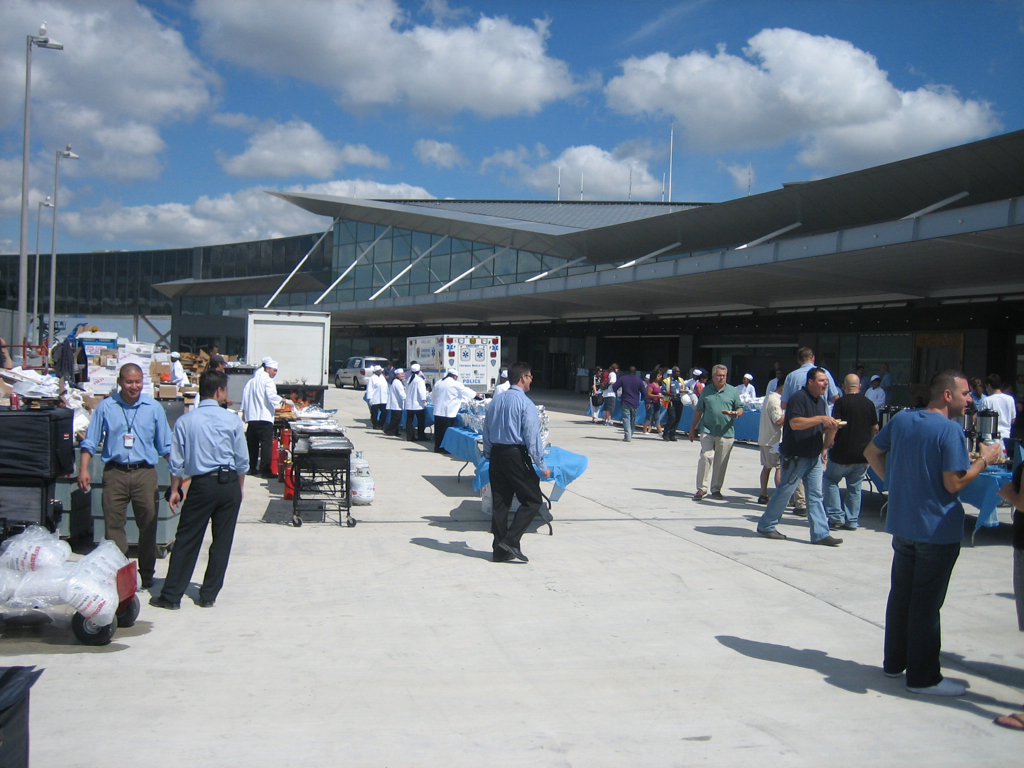 While waiting for our turn, my group, the third of the day, lounged under a white tent in the middle of the future drop-off lane. The pumped-in music was weirdly attentive to the high-flying symbolism: Jackie Wilson’s “(Your Love Keeps Lifting Me) Higher and Higher” transitioned neatly into M.I.A.’s “Paper Planes.” In any event, the crowd didn’t need much encouragement. JetBlue’s VP of real estate and JFK’s general manager were both greeted with an unusual number of “Woo!”s, given the early hour and the lack of any discernible celebrities in attendance. The morning had the slightly woozy cheer of a company picnic. 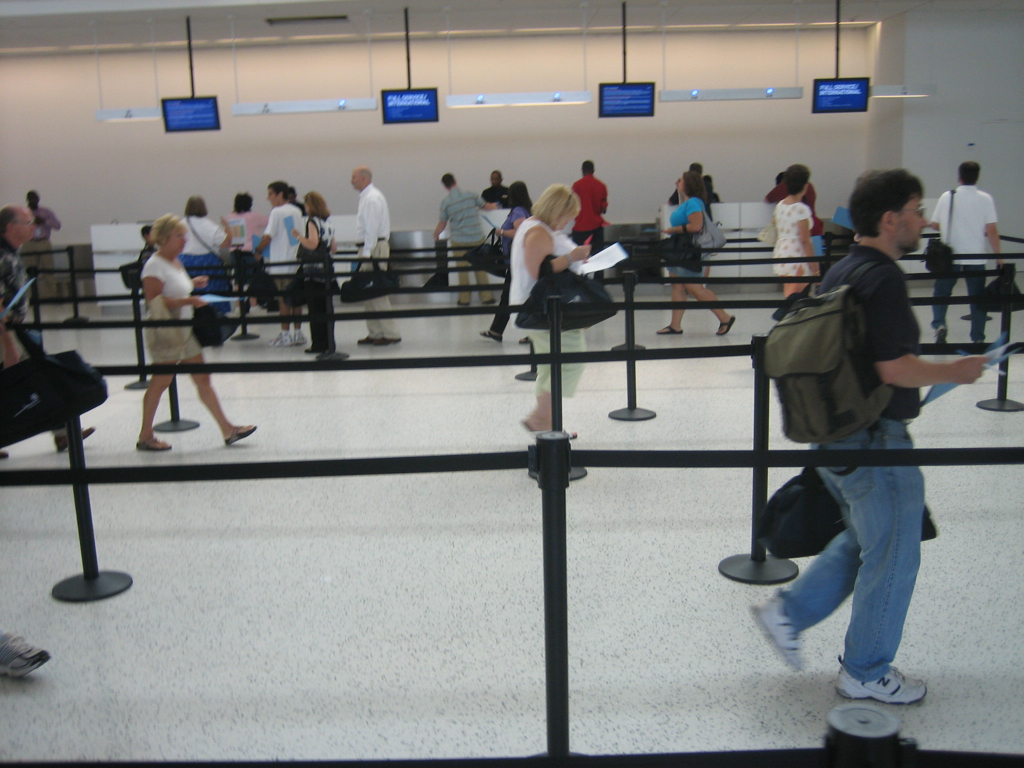 Once we were given our assignments (I was “Mr. or Mrs. GB Bustest,” traveling on the 12:15 p.m. flight to San Juan, Puerto Rico), we each picked up a duffel bag to check (we would be claiming them later at the baggage carousel) and waited in line. It quickly became clear that the novelty of a faux airport experience easily gives way to the banality of a real airport visit, complete with forced sighs and toe-tapping. During the run-up to an actual flight, of course, you will see very few bottlenecks caused by people photographing their fellow passengers. Not here, sadly.

Some snap judgments and observations on my walk around the terminal:

The TSA screeners aren’t any nicer even when the whole thing is a charade. 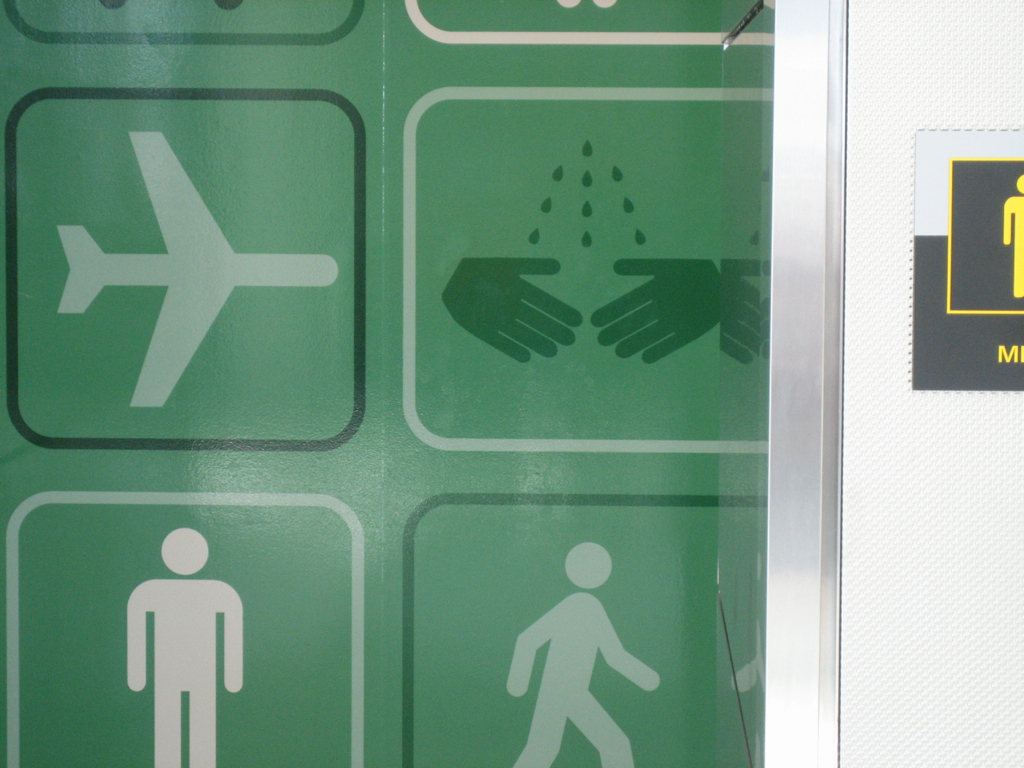 The graphics on the bathrooms look good, though the toilet paper rolls are at the wrong height, and it would be nice if there were hand-sanitizing stations throughout the terminal. (This from Stacey Lindley, a glass designer in New Jersey.) 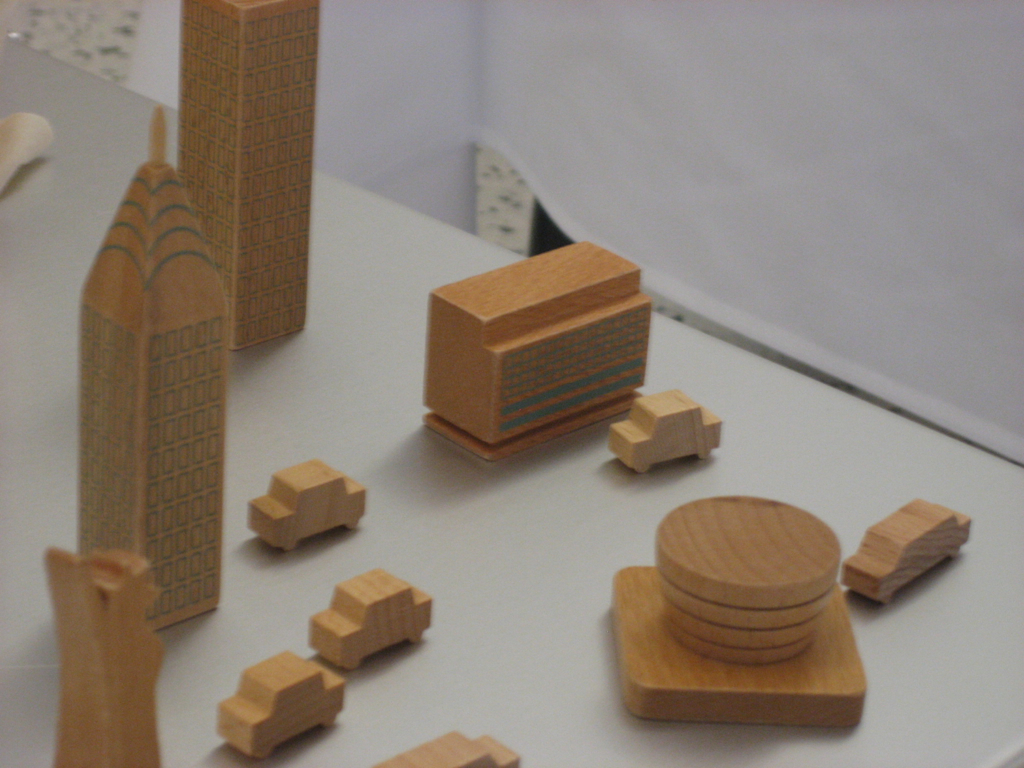 At the new Muji store, the Museum of Modern Art is still upside down. Also: someone stole the Empire State Building! And some colored pencils! 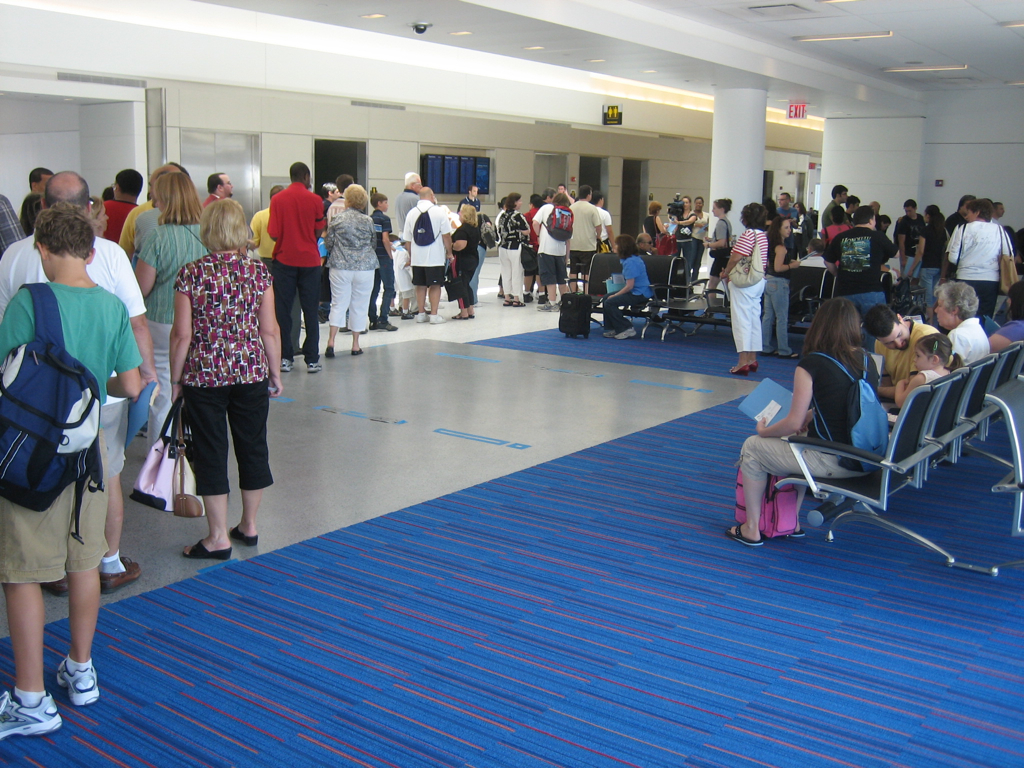 At the gate, while the suckers wait in line, one young enterprising gentleman in a Shore Trolley Line Museum T-shirt takes the opportunity to change his seat from 16A to 22D. “It doesn’t matter because you’re not really going,” his companion tells him. 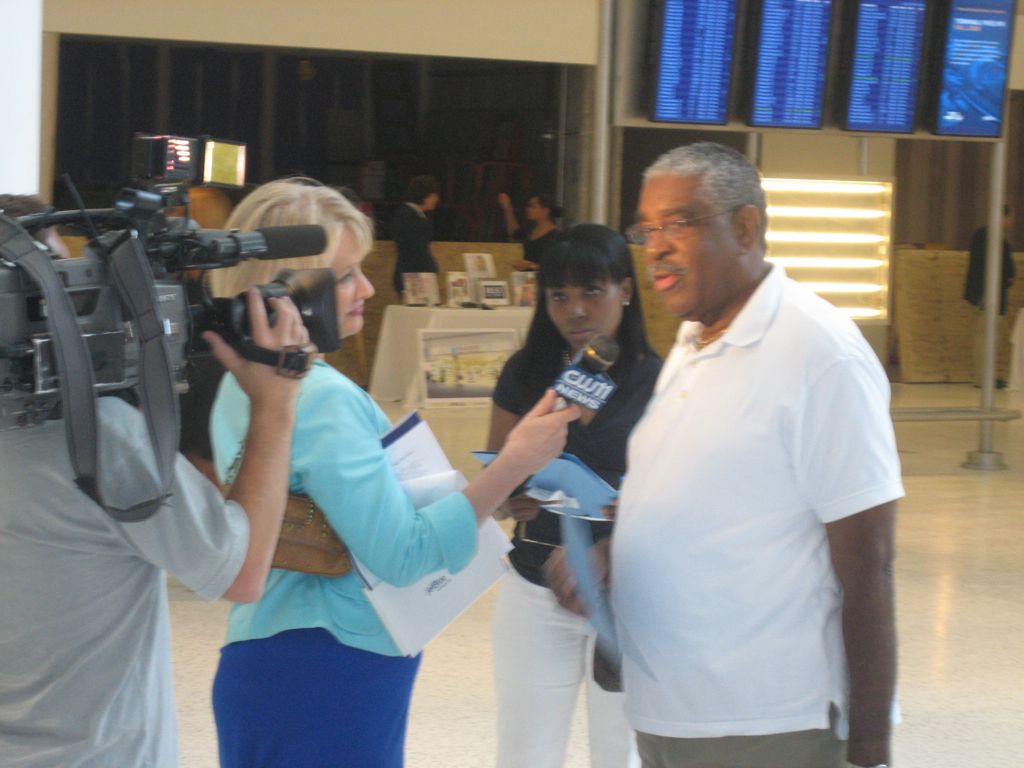 There are a lot of media here. My favorite exchange: “How was your non-flight?” Long pause for non-laughter. “But, seriously . . .”

The escalators seem to be working properly. But a security guard approaches me as I get on and says, “Sir, if you could just stay in the middle on your way down, and don’t touch the sides. The brushes are very sensitive.” Here is a look at the sensitive brushes: 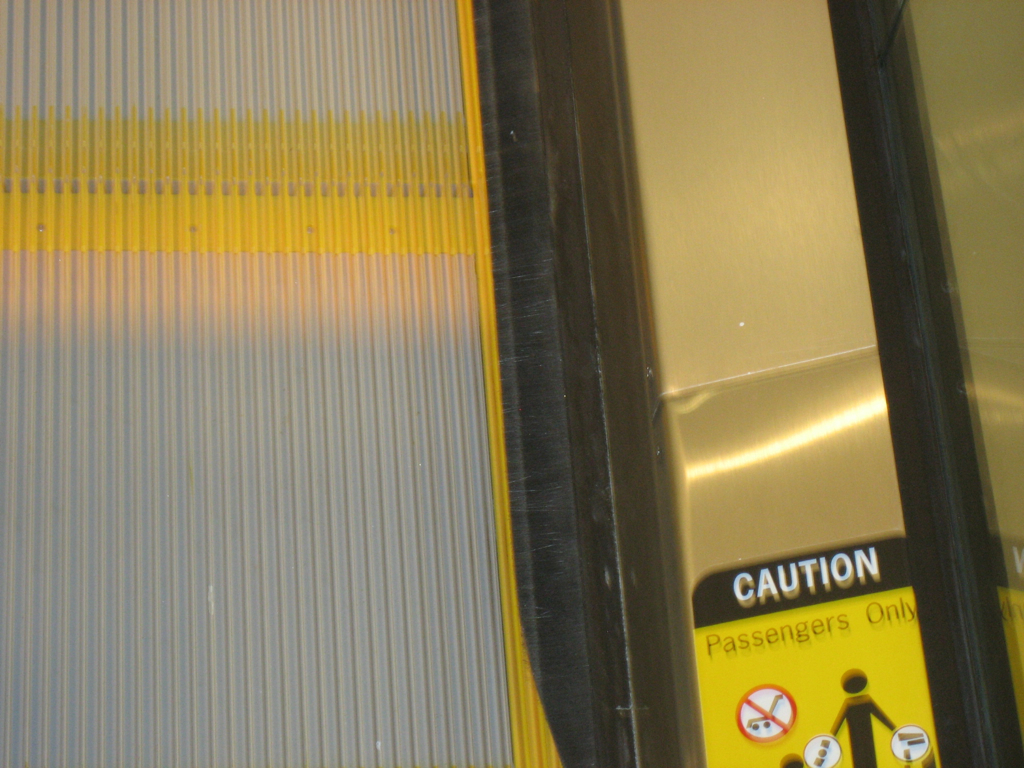 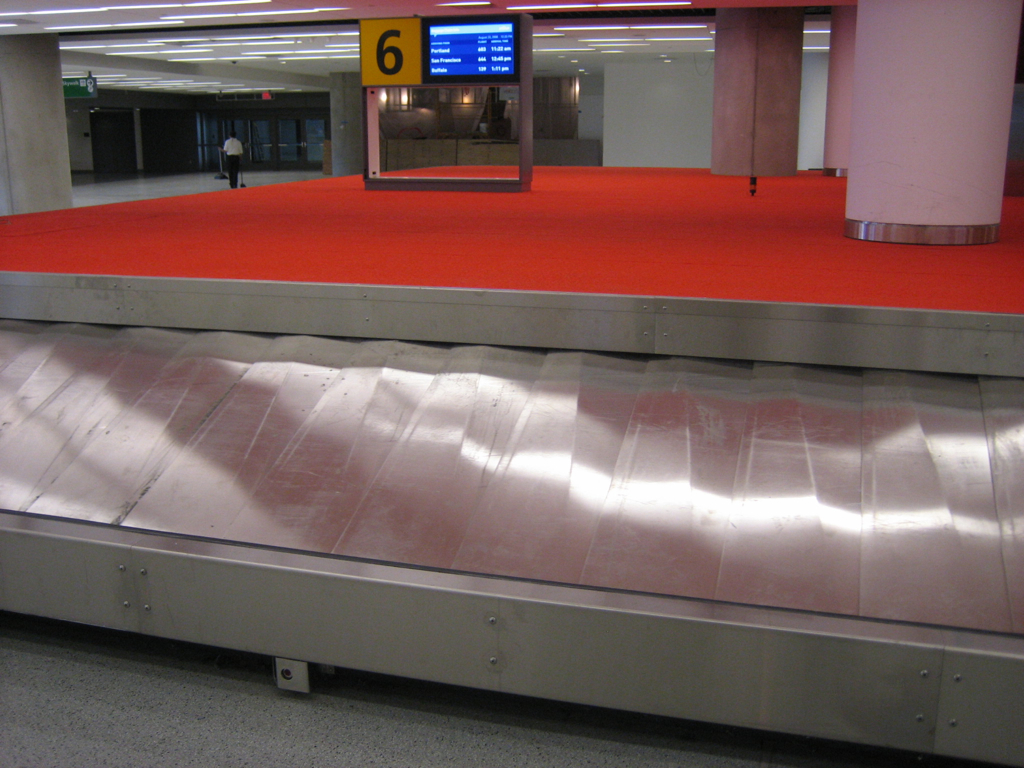 Uh, where’s my bag? No, seriously. They lost it.